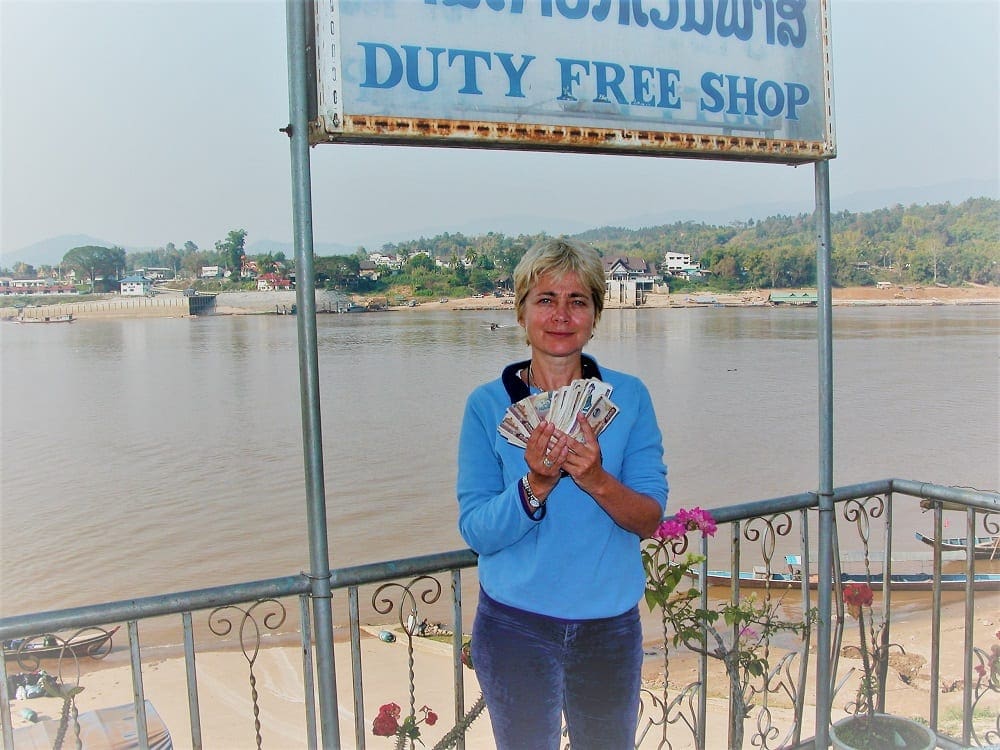 First of all, make sure you understand the currency and know the current bank exchange rate in your destination countries, so you won't get swindled when shopping or exchanging cash.

Change the minimum amount of currency before you leave home. Just take enough for a taxi and your first day. It is usually cheaper to draw out money in the country of its origin than at home. Many airports have ATMs you can use on arrival.

ATMs are usually the safest and cheapest way in which to get your cash. Check if ATMs are available when you arrive and along your route. If they are, then use them to draw out cash as you go along. Much better to carry as little as possible. Take a card that doesn't add commission for withdrawals abroad, as this can add substantially to the cost. Several banks offer these on certain accounts. I run an account with Santander that I use specifically for travelling. Also check the instructions on the machine. In some countries it is standard to charge for withdrawals (on top of your home bank charge) – in others, as in the UK, it varies depending on the machine. Santander card withdrawals are nearly always free at Santander banks.

Many city ATMs have guards on duty. If not, keep a careful eye on other people in the street and put your money away immediately. Be extremely wary in deserted areas.
Not all overseas ATMs are in working order and many do not accept foreign cards. Check for the Visa/MasterCard logos. If the machine seems faulty, move on. You don’t want your card swallowed up – it may be nigh on impossible to retrieve. Stories abound about fake or hijacked ATMs and cards being cloned. Check to make sure that the machine does not seem suspicious in any way. This happened to me once in South America when my statement recorded an additional withdrawal from a machine that I had used. Fortunately, the bank recredited me. And I replaced the card!

If ATMs are not available then take advice from your (reputable booked in advance) guide, if possible, as to where to change money.

Compare rates. Is commission included or not? Most guides know where to get the best deals - sometimes they are from their friends, but I’ve never had a bad deal from a guide’s friend. It’s not in their interest to con you. They will tell you if its safe to change money on the street. In some countries it’s illegal and could get you into trouble. In others it’s commonplace (even if theoretically illegal), and in places like Somalia and Djibouti it’s the only way to get your cash.

Airport bureaux de changes usually charge much higher rates for their captive audience, both here and abroad. Online services are handy. You can often collect at the airport. But they are not regulated – only use reputable companies. Local shops usually give better rates than banks. Here you can sometimes haggle. Hotels are often expensive too. The only exception is in countries where the exchange rate is totally regulated. Find out!

Dollars and euros may be excluded from the above rules and more cheaply bought at home before you travel, if you are not going to America or Europe. One or the other is often very useful as a back-up - sterling is not always accepted in remote areas. The choice of euro or dollars will depend on the country’s political affiliations - again research. These currencies are often accepted as legal tender (or may even be the main currency utilised) – but check the exchange rate.

Some traveller still prefer to use travellers cheques. These are undoubtedly a safer way of carrying cash, as there is a guaranteed refund if they are lost (providing you know the serial numbers). However, they are expensive and inconvenient (and often impossible) to change, depending on the destination. I haven’t used them for many years.

Use a credit card to pay when you can - again minimizing the need for cash. Make sure you have a card that doesn't add commission for purchases abroad, as this too can add substantially to the cost. A number of these are available under different schemes. You can also buy cards preloaded with cash to use like credit cards – but that way you have to pay up front.

Do not let the card out of your sight. Credit cards are very easy to copy or clone. I always take a backup card, which I store separately.

When signing you are often given the option to choose between paying in local currency or your own. Watch out for this -the retailer may try to whizz it by you. The exchange rates charged can be exorbitant. It’s nearly always better to opt to pay in local currency - the rate applied by your credit card company will be lower.

And tell your card provider that you’re travelling abroad, Europe is usually considered to be non-notifiable these days but in other countries your card might get blocked.

In some developing countries credit cards are not accepted at all - there is too much potential for fraud. If the currency is a weak one you might find yourself (literally) with bags of money to care for. Lock it in the room safe if you have one. These are not fool proof (after all the hotel staff have access to the master keys) but insurance companies will usually cover cash stolen form safes – not elsewhere in the room. And the room is generally safer than the street. If all else fails I lock money and valuables in my suitcase, hidden inside garments and make the case as heavy as possible, or chain it to something immoveable. It’s very unlikely that someone will steal your case – unless your hotel is exceptionally dodgy.

Split your money and your cards, so that you won’t lose everything if you are robbed. Keep smaller amounts in the most obvious purse and consider using a money belt – even if they are hot and uncomfortable.....

Do not assume it is safe to leave your bag unattended in a car with your driver. I have had money removed from my bag in these circumstances. And you don’t usually realise until it’s too late to follow it up. People stealing from purses take large notes form the back of the wad, so you don’t notice immediately. But in developing countries the wages are often poor, and temptation may be hard to resist. So don’t provide it.

Check your insurance cover carefully. there are usually strict limits on the amounts of cash that will be covered. Sometimes it is necessary to exceed these in order to carry sufficient for your needs. All you can do is be vigilant.

I hope this doesn’t all sound alarmist. I’m just highlighting possible problems and the need to stay aware when you’re travelling. The vast majority of people are genuinely honest and helpful.