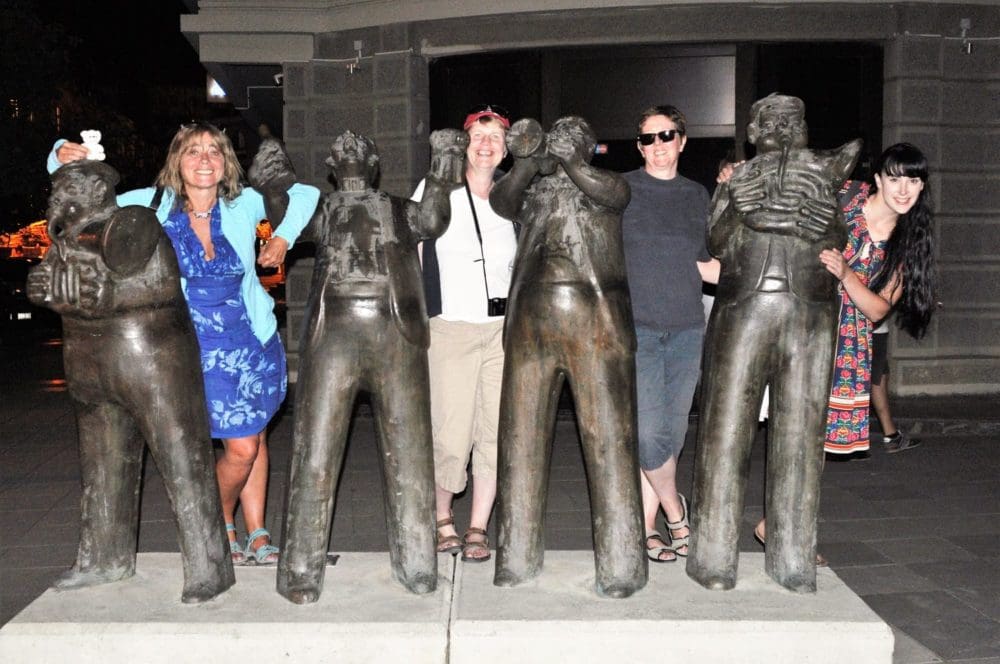 There are nearly always fascinating people to meet and talk to. Sometimes contact with meeting others leads to lifelong friendships. My WhatsApp is full of messages from people I’ve met travelling, who stay in touch and swap news and travel stories. At other times I might take a short trip or excursion with someone (or even have some adventures- enough said!) and then move on alone. If you’re travelling solo because you want some Me Time then you can do the reverse of what I’m suggesting here. Put on your headphones or take a book on trains or in restaurants.

Other people are more likely to talk to you when you are on your own. A solo traveller is seen as more approachable, and often as in need of company. If you’re with a partner or friend, it’s easy to stay in your bubble and outsiders might not want to impose.
If you do want to meet people when you’re travelling then you are also going to have to be proactive. At times, I have to summon up my courage and initiate a conversation. Asking where people are from, or if they are on vacation, is a good opener.

Where to Go to Meet People

It’s obviously important to stay safe – see Travelling Solo Safely. Attitudes to women vary widely across the globe and it’s important to research before you go. In many countries it is unheard of for a woman to travel alone and a single woman travelling solo is a concept that frequently evokes both pity and bewilderment. At Kathmandu Airport, I was taken into a curtained alcove to be security checked. ‘Are you married? How many children do you have?’ inquired the official. ‘I’m not, I said.’ No children. ‘Oh, I’m so sorry,’ she exclaimed and waved me through unsearched.

It’s inevitable that conversation with locals in developing countries will lead to many seemingly personal questions and much astonishment. ‘How old are you?’ is usually the opener, before inquiring about your family. Telling a guy you’re single under these circumstances is almost tantamount to an invitation. He may already be thinking ‘Ticket to Europe’.

‘You live in London. Great. I can come and stay,’ was the second sentence uttered by my young Gabonese guide. So don’t pass on your home address or give too many personal details that could help someone track you down.

Sometimes, it’s much less complicated to invent a husband and hordes of children, who I’ve left at home. And focus the conversation on my companion.

If you feel safer with other women or want to make some female friends – and have somewhere to stay there is a really good organisation for solo travellers called 5W - Women Welcome Women Worldwide. They offer lists of members all round the globe who will meet up and/or offer free accommodation. Check it out.

On the whole I’ve been welcomed as a traveller. Most people I meet are very pleased that I’ve shown an interest in their country, though in some places, like South Sudan, the concept of tourism is totally foreign. I was warned not even to think about taking out my camera in Juba, where photography equates with spying.

I’ve been on the receiving end of some abuse as a British or European traveller. I’ve been told to ‘Go home!’ both politely, in Arabic and in much more colourful Anglo Saxon English. I’ve had rocks hurled at my bus in Jordan (Sadaam Hussein had just invaded Kuwait and I was one of the last remaining tourists.) More frequently, I’ve been welcomed, especially, to my surprise, in ex-British colonies, where fond reminiscences have been common. In Bangladesh, my guide told me that it was commonplace to describe someone as ‘being English’ if they had a good idea. In Somaliland, the locals queued up to tell me, in very broken English, and with very big smiles, that they were once a British Protectorate. The peak of G’an Libah looking out across the desert to the Gulf of Aden is most notably ‘where the British drank their tea’.

Travelling makes me realise how I lucky I’ve been growing up in the UK, even though our current politics are also a cause for confusion on the part of others and- embarrassment, on mine. I’m questioned repeatedly about Brexit. It was all the officer at the Somaliland Embassy wanted to talk about when I went for my visa. He didn’t ask me anything about my proposed journey.