Yet another early start to catch a plane to Java, (I will get some sleep one day). Well, two planes, from Sumatra via Jakarta to Yogyakarta, half way down Java. I am a bit apprehensive, as the Indonesian national carrier, Garuda, has been banned from Heathrow for years. However, the flights are fine. Though I was complaining about the lack of even a drink on board, until I remembered that it was Ramadan. I'm on a group trip travelling through Indonesia from Medan, in Sumatra to Bali.

Java is the world's most populous island, home to approximately 56% of the Indonesian population. And it's probably the most important of Indonesia's many islands. The capital city, Jakarta, is on Java's northwestern coast. Many of the best known events in Indonesian history took place here. It was the centre of powerful Hindu-Buddhist empires, the Islamic sultanates, and the core of the colonial Dutch East Indies. Four of Indonesia's eight UNESCO world heritage sites are located in Java. 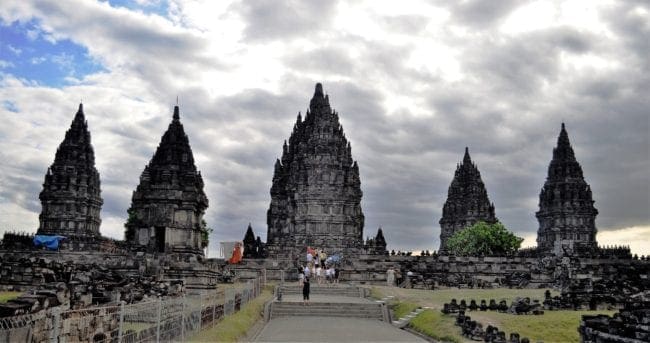 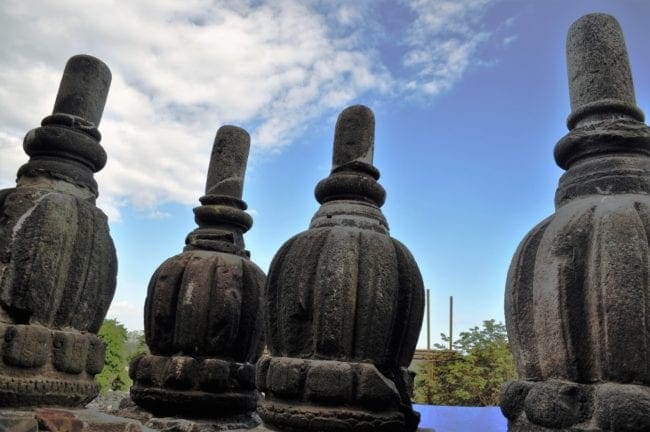 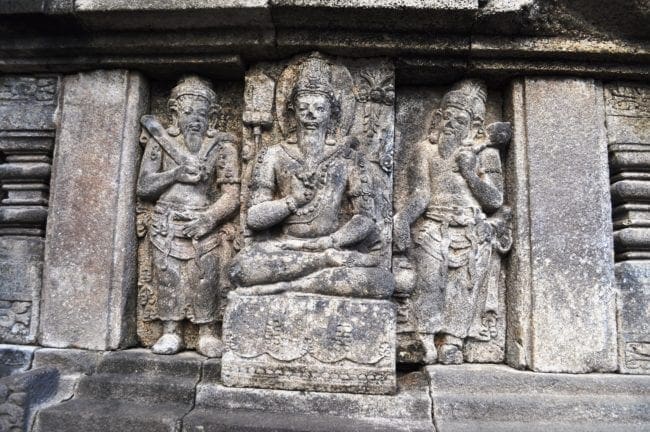 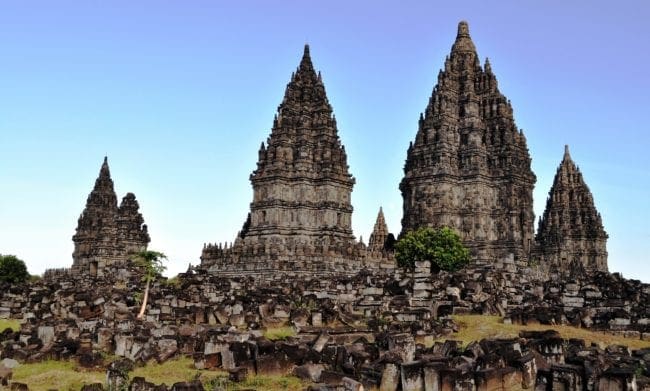 Pramabanan temple, close to Yogyakarta, is one of those UNESCO sites and we have time to visit the big ninth century Hindu temple complex here (still being reconstructed). This is the largest Hindu temple site in Indonesia and the second-largest in Southeast Asia, after Angkor Wat. It's reminiscent of Angkor too, with its soaring pointy towers. The central building is 47 metres high and that nestles inside a large complex of individual temples -240 altogether. Wow is the right word.

It also has a restaurant that serves food other than fried noodles. And the hotel for the next two nights is lovely. Real food and a swimming pool. We are in Java now. 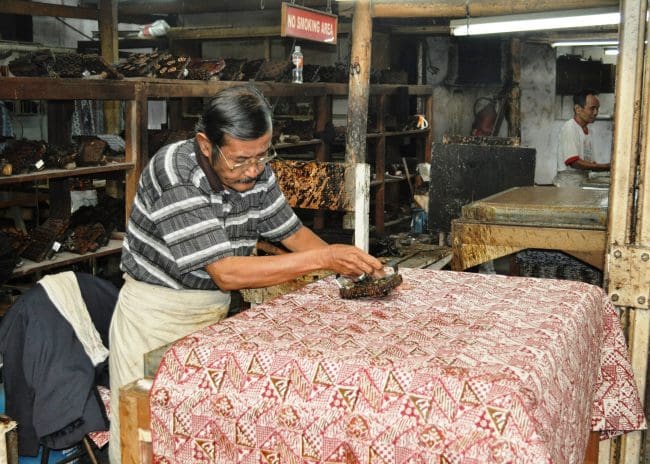 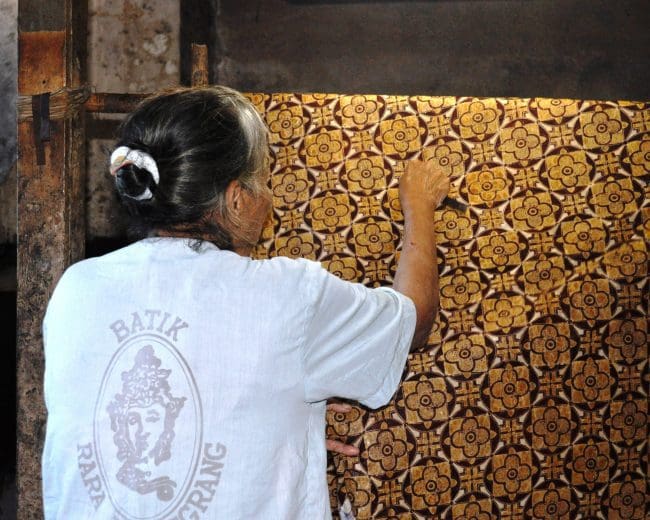 Despite my lovely hotel, I have had yet another dodgy attempt at sleep. This time something was banging in the bathroom all night. The relentless pace has not let up. We have been whisked off to a batik shop/demonstration and another silversmith’s (ouch!).  Naturally we are encouraged to go to the shops where our tour leaders get the most commission and they are always described as being ‘really, really fantastic’.

In the spirit of south east Asian nicknames Yogyakarta is usually known as Jogj. There's another sultan’s palace to view here (though the Dutch allowed the sultan of Yogyakarta to stay around and he still lives there.) The palace complex, or kraton, was built in the mid eighteenth century, designed to reflect the Javanese cosmos and the country's ancient beliefs. It links god with humans and nature, facing Java's Mount Merapi and the Indian Ocean. It was sacked by Stanford Raffles leading a British and Irish force in 1812. This palace was built by Sultan Hamengkubuwono VIII ( 1921 to 1939), and was rebuilt again after earthquakes in 1876 and 2006. It's now a museum of Javan artefacts, including cars and a set of old gamelan instruments. 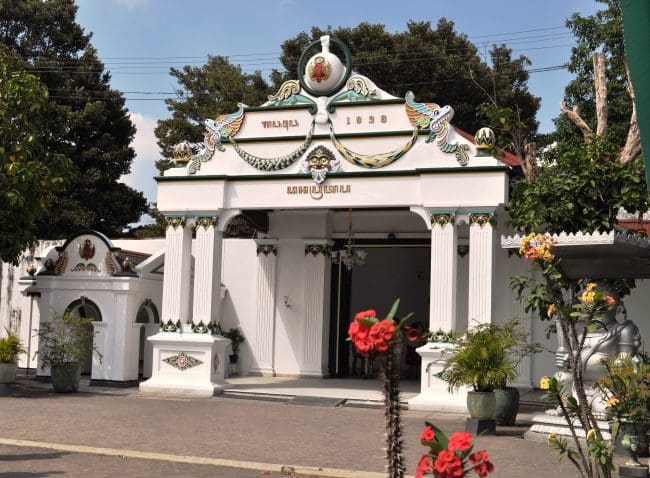 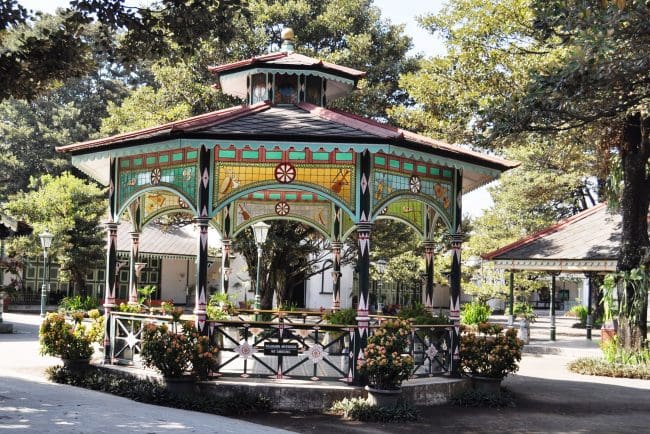 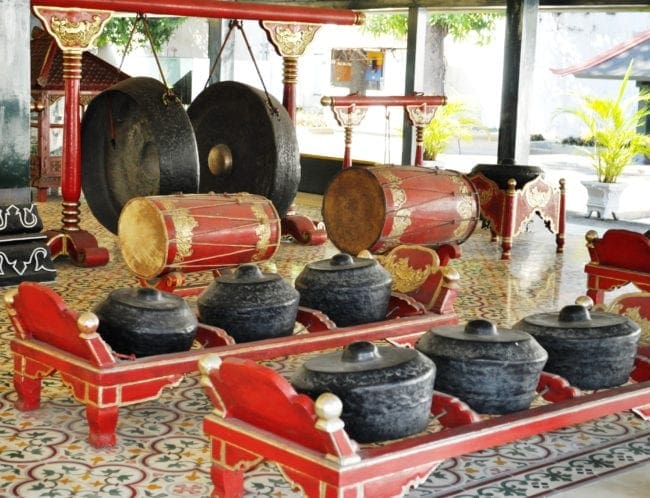 Back west, to another UNESCO centre, the largest Buddhist temple in the world at Borodupur. It is presided over by Merapi, the most active volcano in Indonesia. 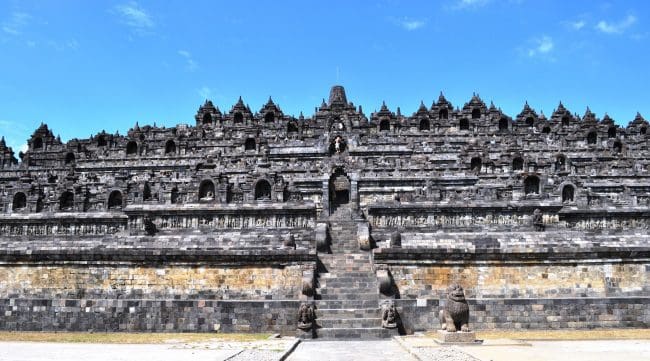 Borodpur Temple dates from the ninth century and consists of nine stacked platforms, six square and three circular, topped by a central dome. It is decorated with an astonishing 2,672 relief panels and originally 504 Buddha statues. The central dome is surrounded by 72 Buddha statues, each seated inside a perforated bell shaped stupa. The temple fell into decline in the fourteenth century, when the Javanese turned to Islam, but it's still a key Buddhist Pilgrimage site .There's a lot of scrambling to be done, following the route of ancient pilgrims, circling the mandala-shaped structure from the early realms towards Nirvana. 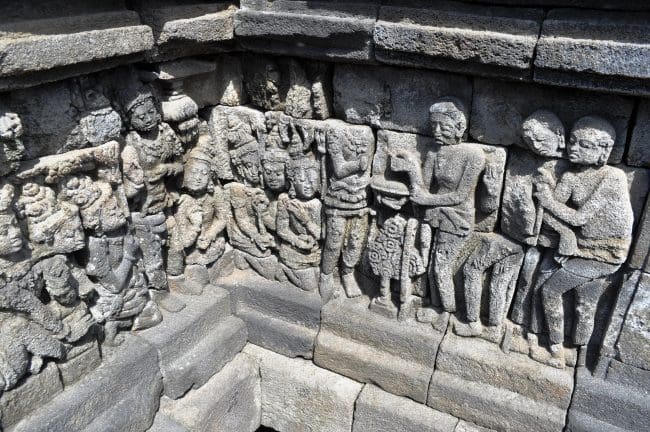 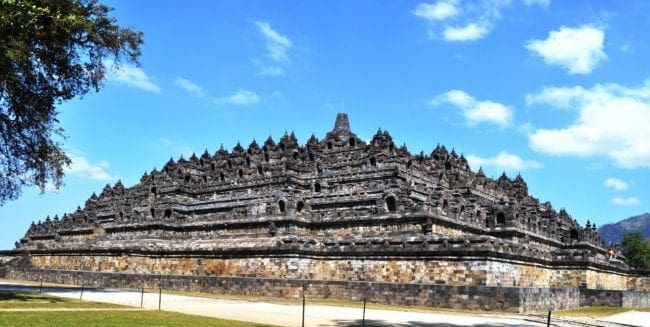 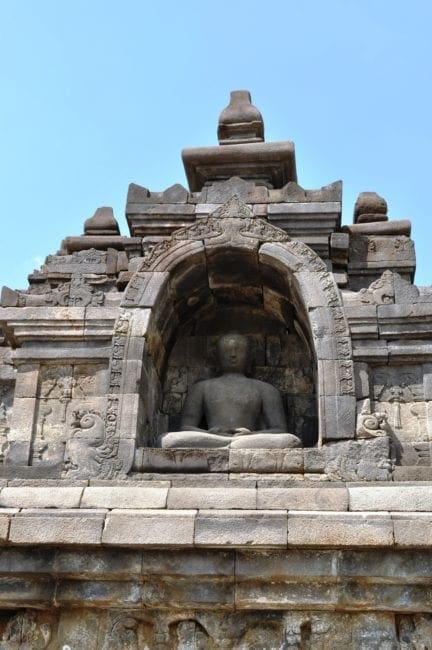 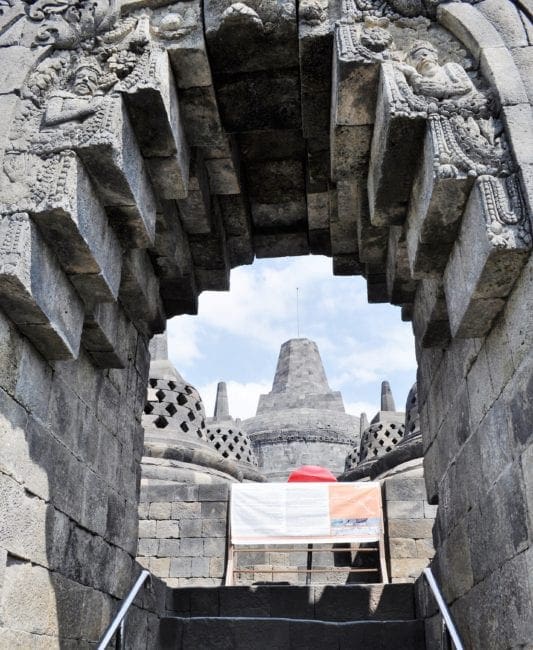 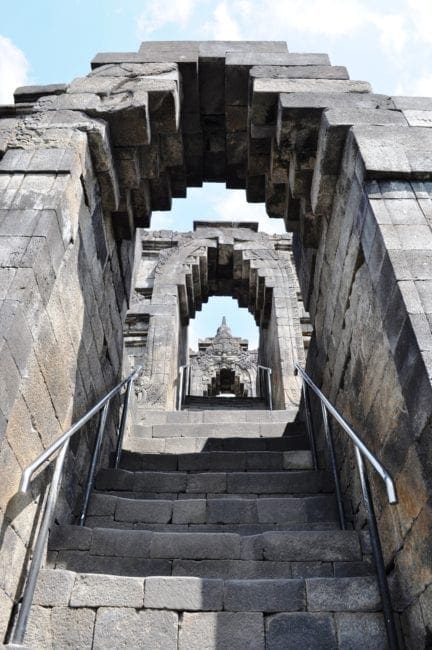 Today, Mount Merapi (also meaning Mountain of Fire) just smokes quietly and eludes our efforts to take a decent photo, by hiding in cloud most of the time. It has erupted regularly since 1548. Located just17 miles north of the city of Yogyakarta, which has a population of 2.4 million, it's a threat that folk here live with daily. Thousands more inhabit the actual flanks of the volcano, with villages as high as 1,700 metres above sea level. There was a big eruption in 2010 and the bulldozers are still out, clearing the lava from the main street of the small town and the riverbed.

Two miles east of Borodpur, is another, even earlier, Buddhist temple, Mendut. Mendut was built towards the beginning of the ninth century. Basically one massive plinth, with a 26 metre temple tower on top. It forms an interrelated cluster with Borodpur and a third temple called Pawon. Mendut also incorporates a Buddhist monastery. During full moon in May or June, Buddhists in Indonesia observe the annual Vesak ritual by walking from Mendut through Pawon to Borobudur. They chant Buddhist prayers and perform pradakshina (circumambulation) around the temples. 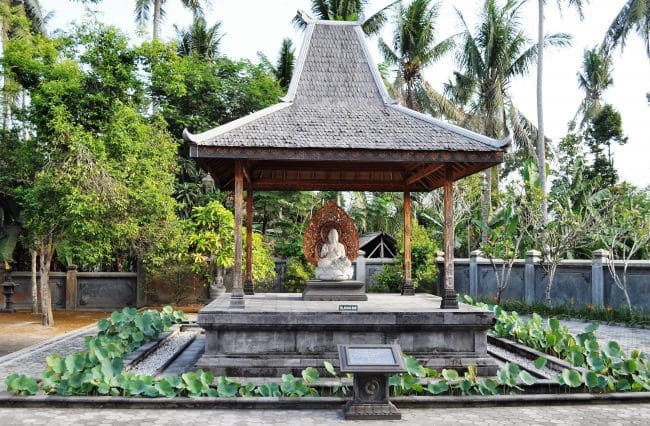 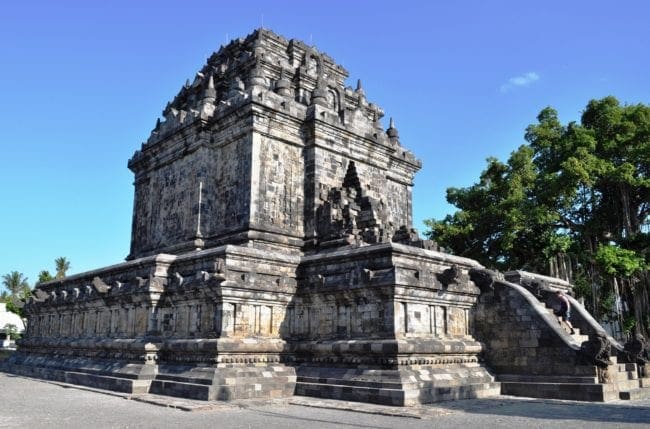 On the Road in Java

A lovely meal at a great restaurant next to the hotel. Proud of myself for sticking to Indonesian and not being tempted to have steak. The cheesecake is a different story.

Absolutely not allowed to sleep. Knocking in bathroom cured, but up at six yet again for another long day on the road. The traffic is solid. I have discovered what the extra man on the bus is for. He waves his arm out of the window, palm upwards to indicate that the bus is going to overtake in a particularly dangerous spot, despite the fact that there is no room between the vehicles in front to pull in. After the driver has forced his way in, the gesture turns into a thumbs up.

The bus isn’t exactly speedy. The wheels are out of alignment and every time we do get up enough speed to overtake it begins to judder alarmingly and we have to fall back again behind the endless line of trucks. However, we still have the pastoral scenes to entertain us. 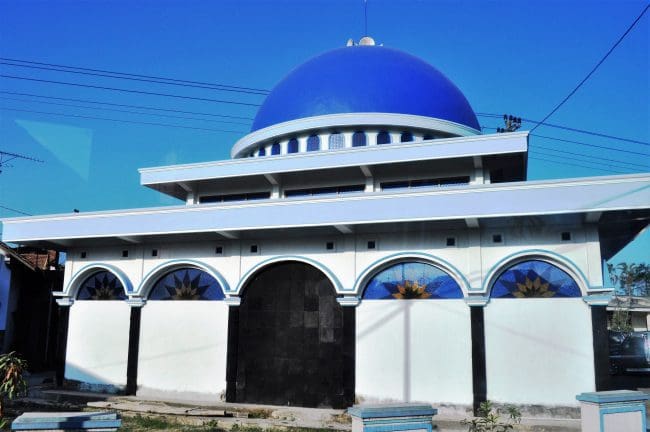 Completing the top part of our circular route now, back east, to Surakarta. This city is also known as Solo. There are two more royal residences. The eighteenth-century Keraton Kasunanan in Solo, todaya museum of heirlooms,. Mangkunegaran Palace is one kilometre north. Prince Sambernyawa – who took the official title of Mangkunegara I commissioned his palace after winning an ongoing argument with Suraakarta, Yogyakarta and the Dutch East India Company. They eventually relented and gave him his own realm to rule.

Mangkunegaran Palace consists of separate buildings erected for specific purposes. There's the Pendopo Ageng (Great Audience Hall) and the Dalem Ageng, once reserved for the Mangkunegaran court’s newlyweds. Today it houses a collection of weapons, medals, and artistic artifacts owned by the royal court. Surrounding the chambers are beautifully manicured gardens decorated with elaborately painted pavilions. 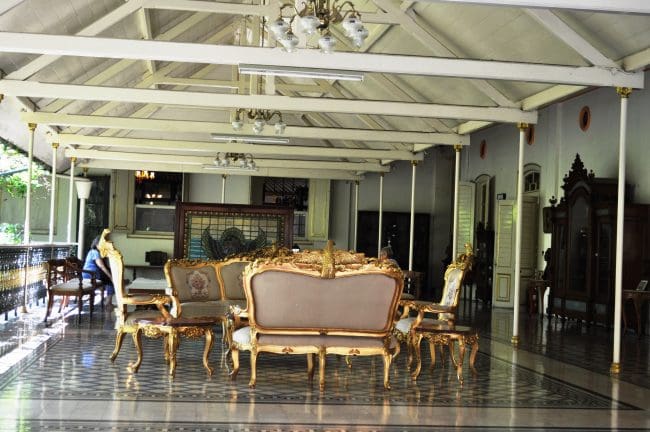 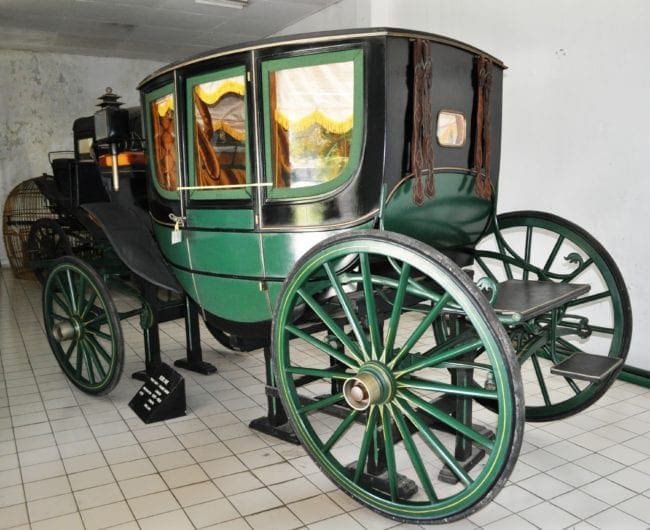 Most of the sightseeing in these involves oohing and aahing over the assortment of gifts that the sultan has received. Quaintly, some of these are gold and silver chastity belts for both sexes. The male contraption looks especially lethal, with various spikes protruding.

We have lunch at another Padang. This is a bit like tapas - lots of small dishes but they put them all out on the table and you pay for what you eat. Not a noodle in sight.

Java has even more traffic and much more urbanisation than Sumatra. The roofs are also different again, much squatter and far less elaborate. Perhaps they are fertile enough already down here. We are stopped by the police for an imaginary traffic infringement. The guide tells us that Indonesia is not nearly as corrupt as it used to be.

That's not the end of the palaces. We are staying in one of President Sukharno’s old residences tonight. (There were six of them). It's all Dutch colonial, carved teak and garuda birds. Nevertheless, there is a cockroach waiting to greet me in my outside bathroom with mandi. I scoop it up and flush it down the toilet. I don’t want to tread on that in the dark. They are impossible to kill by squashing. Now I’m wondering if it’s safe to sit on the loo. 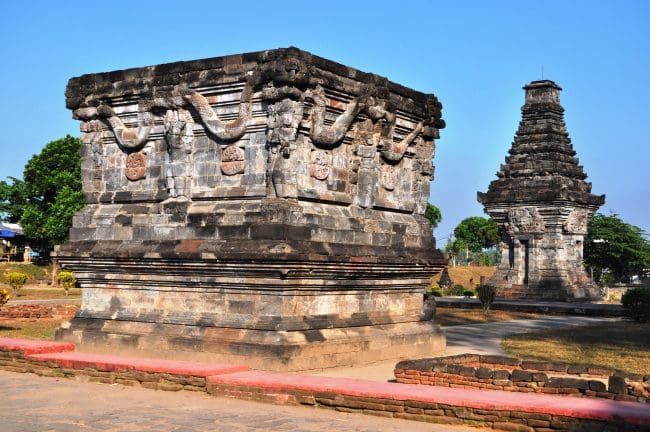 Yet another early start, yet another long day in the bus. Although it is a new (well different) bus, the malingerer having been retired. It is becoming increasingly clear that the itinerary is a creative fiction. Twenty minutes at another Hindu temple complex. the Candi Penataran temple in Blitar. It's dedicated to Shiva. 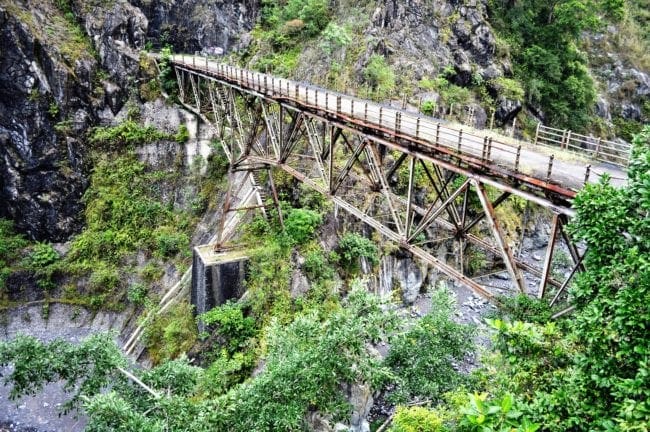 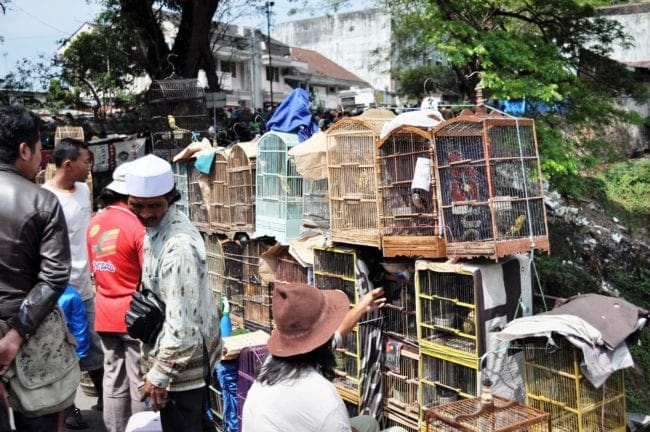 Then, an hour in the town of Malang. The bird market contains a whole assortment of wild life, some of it definitely not of the avian variety, crammed into rows of wooden cages toppling into a narrow road. There are puppies and, more surprisingly, mongooses. ‘Visiting the Dutch colonial buildings’ turns out to be an ice cream in an old café. and there's an old Dutch Colonail bridge to be admired. Otherwise we motor on relentlessly. I was going to say speed but that is definitely not the right word. Not even a lunch break is permitted and I have to beg for a toilet stop.

Endless rice terraces, with all stages of the growing cycle in evidence. Harvesting, threshing, tilling, harrowing, and ploughing (with hefty buffalo). The countryside is becoming increasingly bedecked with bunting and banners, mainly in scarlet and white. The guide explains that there are a several celebrations going on in August. It is Independence Day on August 17th and it is also Ramadan of course. 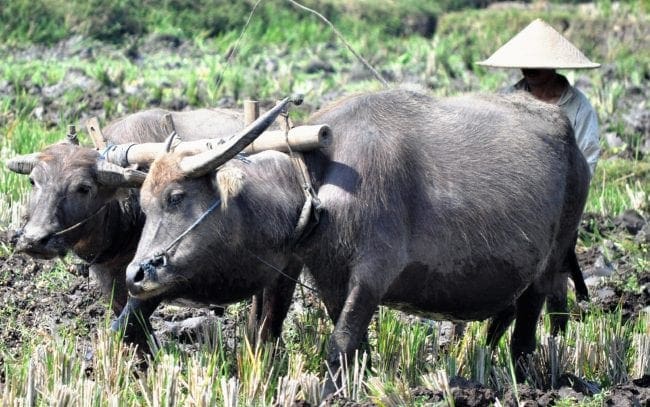 Many shops and restaurants remain closed during the day because of the latter. Although there seems to be a lot of cooking taking place, so that the people have nice things to eat when sunset comes and they break their fast. Most of the goodies seem to be very sweet, involving lashings of palm sugar and coconut. It’s a bit like celebrating the end of Lent with an Easter party every day for a month. Then there is Eidh, which is a very big party to celebrate the end of all the small parties. Some of the rules also seem to be open to various interpretation. If you travel a long way you can eat during the day, but are expected to extend your fast by another day.

Sadly, Iconic Mount bromo is off limits. its erupting and we aren't allowed anywhere near it. The Earth is busy at the moment. So, even further east to Ijen, right at the eastern tip of Java. Ijen is a volcano complex - a group of composite volcanoes known for a blue fire, acidic crater lake, and very labour-intensive sulphur mining. The larger Ijen caldera Ijen, is about 12 miles wide and the highest point is the Gunung Merapi stratovolcano (yet another Mountain of Fire).

A much too early start for the group to brave the volcanic slopes of Mount Ijen - superb views across a cobalt lake, accompanied by steam from countless fumaroles and the stench of the sulphur, which is collected and bagged up here. It's also made into numerous souvenirs. 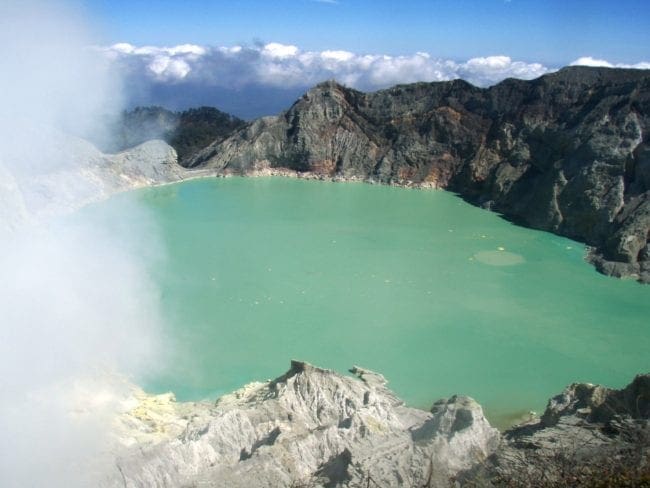 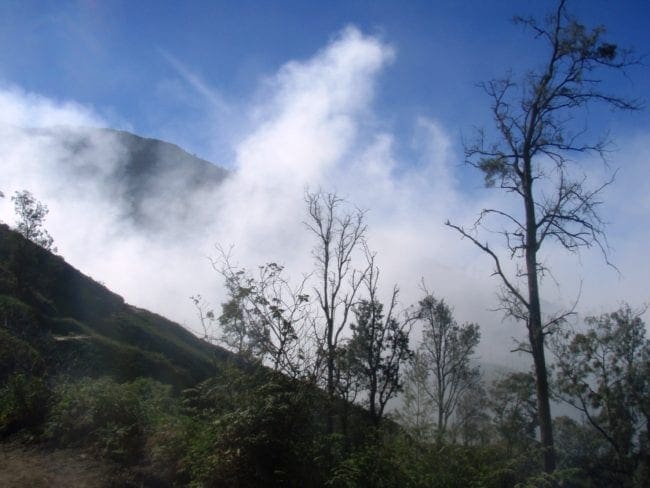 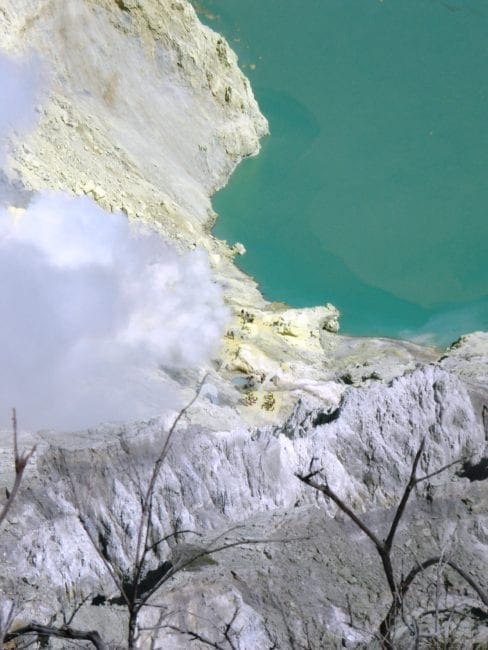 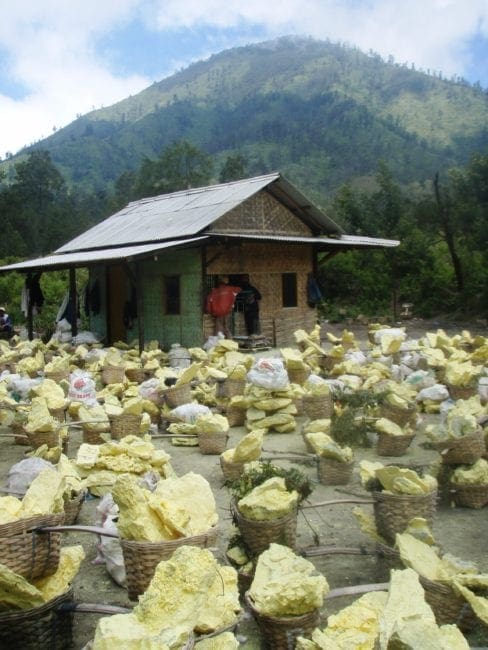 Kalibaru is a tranquil spot, a plantation town, clinging to the cool foothills, of these lofty ranges. It's encircled by coffee, rubber and cocoa. In Kalibaru town there are umpteen shops selling metal spires for mosques. Guide Eddy tries one out as a hat. 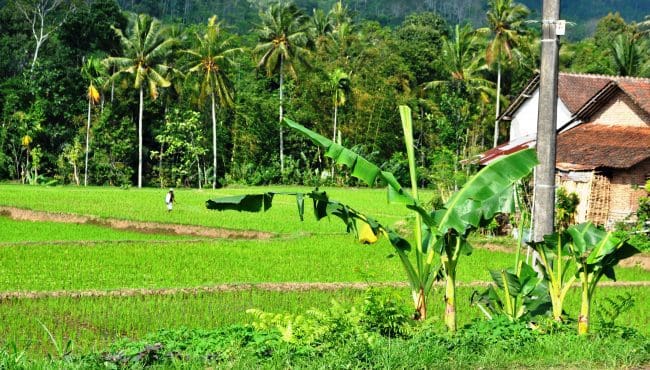 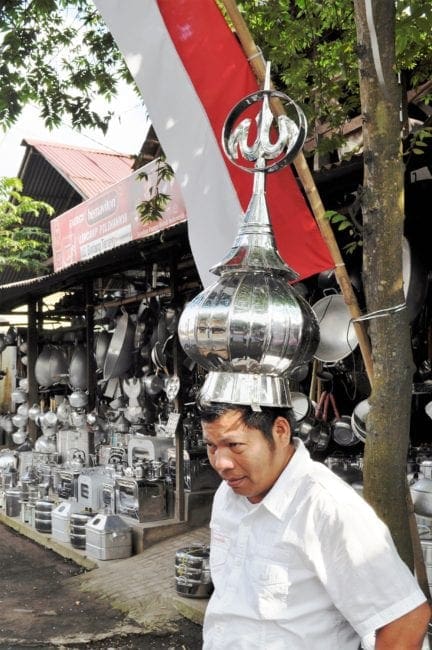 My diet today has been disgraceful. I have had coca cola, ice cream, dates, chocolate (well you have to support the local plantations) and sweets.

Now we catch the ferry to Bali.