The plane taking me from Shanghai o my Yangtze Gorges cruise is late, but the wait is fascinating. They show a cartoon video in the lounge - how to avoid the terrible swine flu from America. No mention of bird flu. Two different airlines are both flying from Shanghai to Chongqing at the same time and they board them both through the same gate. Great fun watching them chivvy all the passengers on and off the wrong planes.

The stewardess exhorts us to have a cosy flight in the cabin. Then they switch on the plastic music. You can’t get away from noise.

I’m being ferried everywhere by CTS guides who talk at me incessantly, testing me on my knowledge of the difference between the Republic of China and the Peoples’ Republic of China. It’s so one-on-one I don’t actually get to look out of the window much.

I imagined Chongqing to be a rural idyll perched on the Yangtze, at the beginning of the Three Gorges. It’s actually a conurbation of 38 million people, with a huge green opera house that looks like a giant tank. The river is very brown and muddy and I’m surrounded by tower blocks. No doubt the pretty scenery will begin tomorrow.

The boat doesn’t leave until four in the morning, so I’m sitting here in my cabin with balcony (and piped music), watching the boys fishing with looped nets like big lacrosse sticks. There’s a brass band playing on the boat moored next to mine and the passengers are marching in. However, I am diverted by the hospitable signs in my room. ‘We hope you have a comfortable and sweet time dear guests’. It will cost me 3000 Yuen if I want to buy the sofa in my room (or the mattress). Housekeeping will supply me with ‘ice rocks’. And, slightly more worryingly, ‘Please replace the life jackets after use’.

• My suntan lotion has leaked all over everything in my bag - it’s all gone, the whole lot - (it hasn’t done the things in my bag a lot of good either) and it’s pretty hot here. The shops on the boat only sell useful things like pearls and silk paintings.
• The safe in my room is broken
• The horrid man on reception says dinner isn’t included on the first night. No-one told me to bring any food and the boat is currently doing a Marie Celeste.
• There are only two small lifeboats for over 300 people 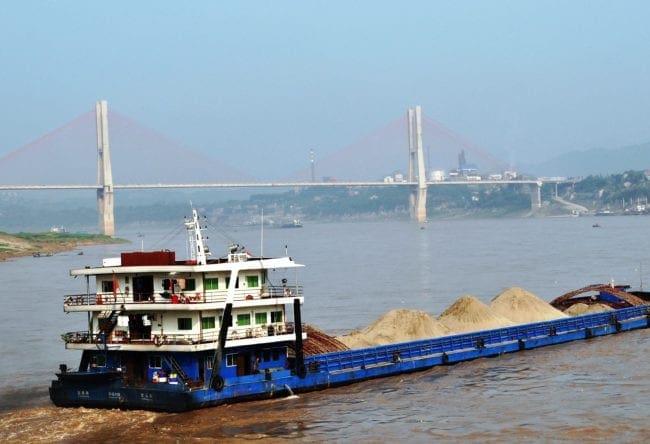 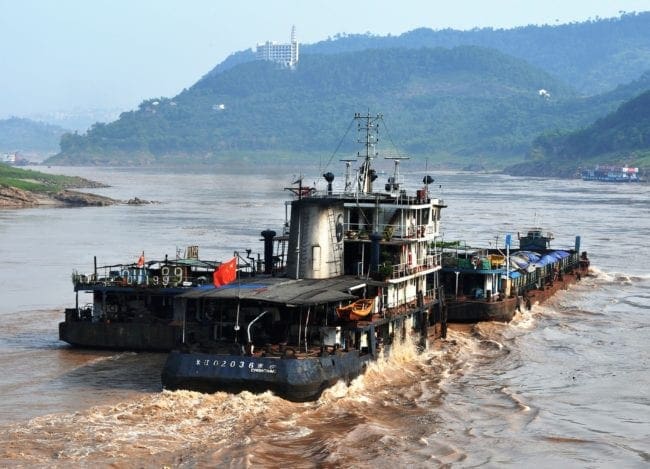 • The safe wasn’t malfunctioning after all and the guy from housekeeping who came to mend it repaired the broken zip in my bag instead.
• The nice man on the reception desk got me a free dinner. Enough for 4 people if peppered steak, rice, fish and tomatoes, pork and bamboo shoots, Macedoine vegetables, the thickest mushroom soup you ever saw, melon and wooden green stick all served at once is your thing
• The man on the tannoy says two lifeboats is plenty, as there is so much traffic on the river we are bound to get picked up quickly if the boat sinks. (In the dark? Before we get mown down by coal barges?)
• They serve margaritas in the bar, though I haven’t quality checked them yet

Woken at 7a.m.by the tannoy. When I wake up properly I will look for the off switch. I refuse to do a Hi de Hi. 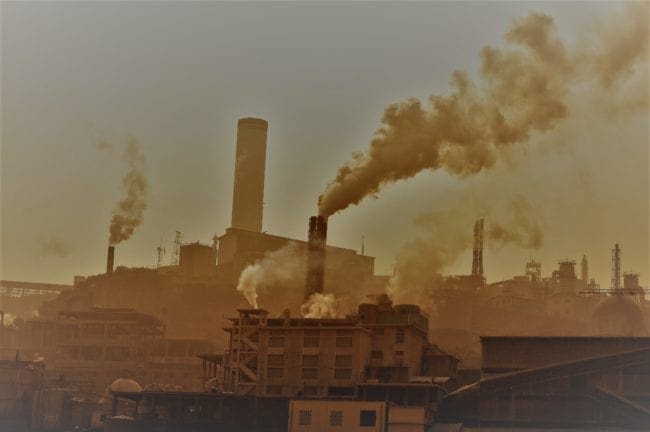 I thought the passengers were roughly half Chinese, half American. However, I have discovered that half the Chinese are also American. The Chinese are seated on one side of the dining room and ‘the foreigners’ on the other. We sail past rural scenes, limestone and bamboo. But these are interspersed with monstrous factories and refineries belching smoke á la Germinal. Concrete villages and convoys of barges chugging in the opposite direction – mostly coal to feed the pollution. The river is exceptionally dirty – the swirling eddies carry all kinds of detritus, everything from flip flops to tin cans. Everyone here talks about conservation, but in reality recycling means tipping the rubbish into the river.

The cruise is not very beautiful yet, but it’s certainly interesting. It’s humid and sticky in the breeze, but even so, and notwithstanding jet lag, I‘m having awful trouble staying awake today. I have just realised that I took one of my sleepy melatonin tablets when I downed my morning vitamins. Now drinking Coca Cola to try and counteract the effects.

I’ve also been and had acupuncture in the clinic down in the hull. The white coated doctor threw in some moxibustion. I haven’t a clue what it is and I couldn’t see either as I was lying on my back. But it seemed to involve a lot of heat and the burning of some herbs in a tube. 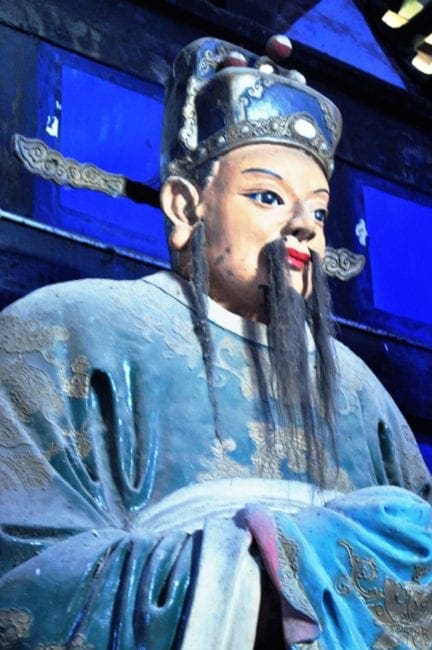 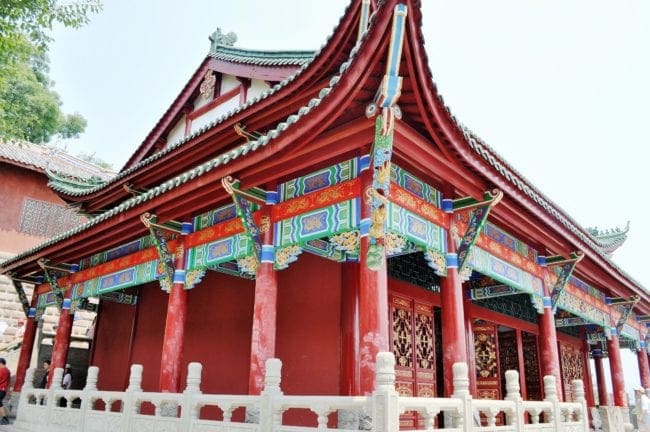 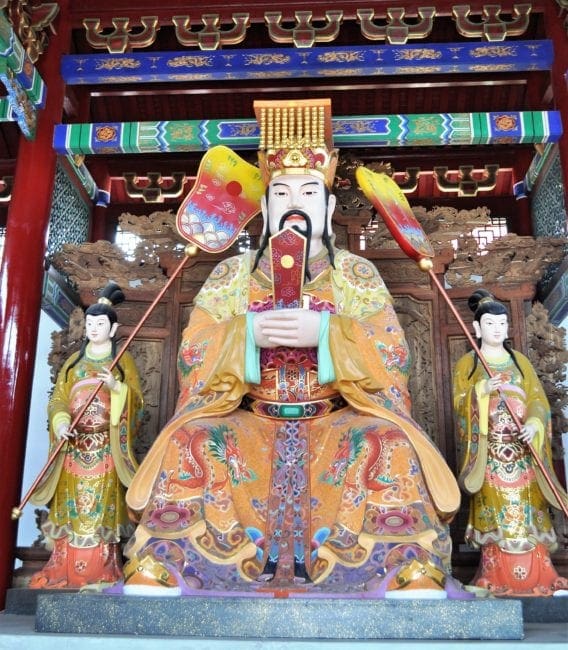 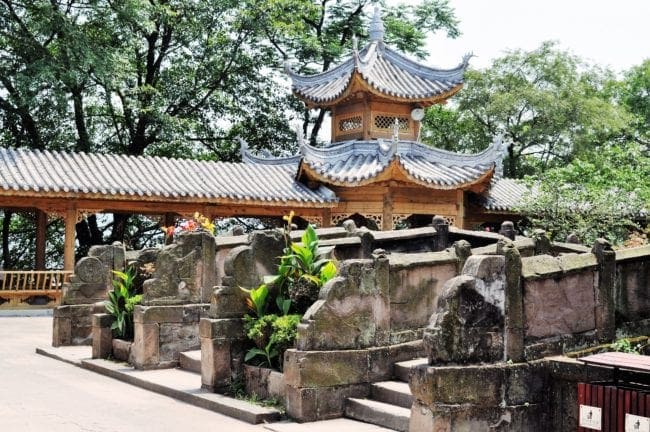 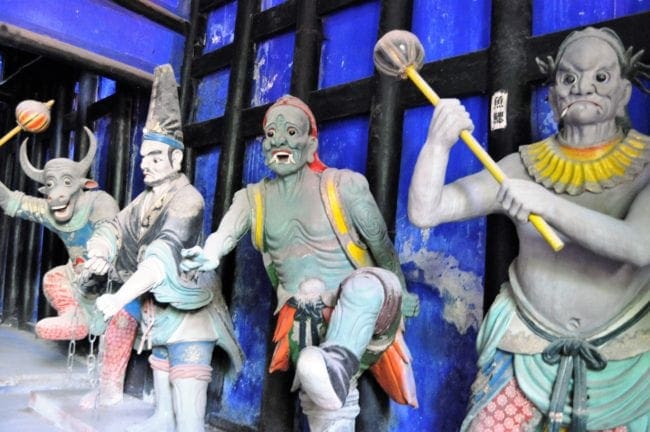 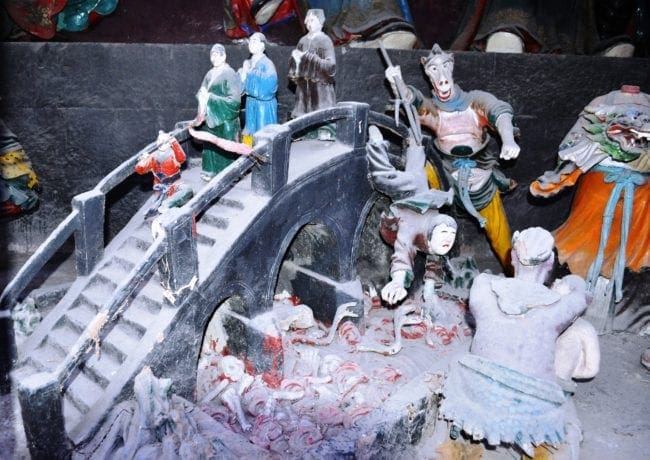 A visit to the ghost city at Fengdu - sorry ‘shore excursion’. It’s a sweltering 100 degrees Fahrenheit and there are 600 steps no-one has told us about. The funicular isn’t working yet. The jostling Chinese laugh at the mad English lady and share their umbrellas. And the noise pursues us. All the guides have microphones which are set at full volume, so the temples are far from peaceful. Aptly, this is Chinese Hell. The Chinese believe that every soul comes to this spot when the body is dead and is judged by the Lord of Hell at the top of the mountain. The city plays safe and combines the beliefs of Confucianism, Taoism and Buddhism. Some of the statues look much kindlier than others. Is that fair? There are also suitably gruesome tableaux of men being eviscerated or pushed off bridges with pitchforks (presumably this is a lesser punishment).

There are views across the river to more sprawling tower blocks 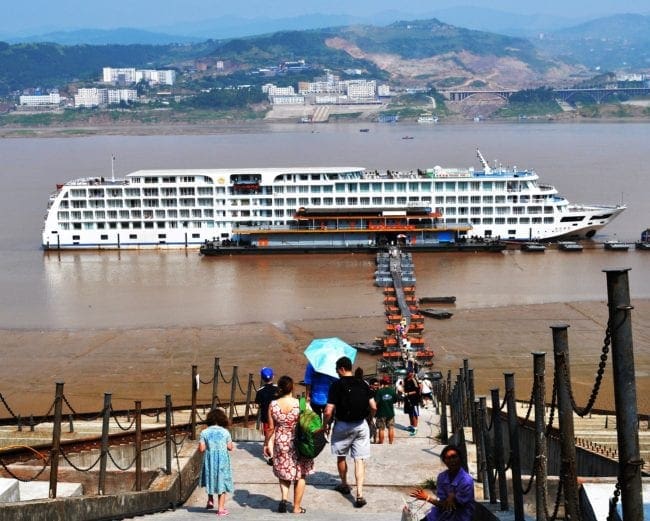 I eat dinner with a party of Americans, so I get my own back on the noise front. We are definitely the loudest table in the dining room. Chinese massage before bed.

Well I  didn’t take any melatonin today and I’m still falling sleep, so it must be the acupuncture. I certainly feel pretty giddy when I stand up afterwards. More Coca Cola. The Chinese doctor has given me a certificate. It says that I had an obstruction of Qi in my back and he has expelled the wind-evil and eliminated dampness. 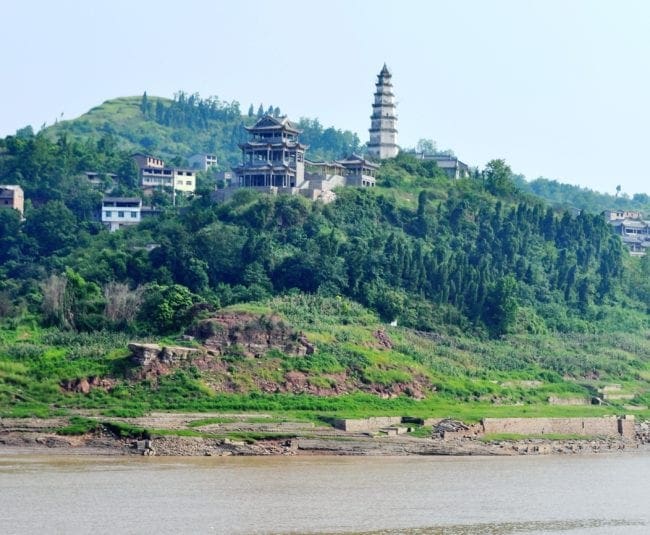 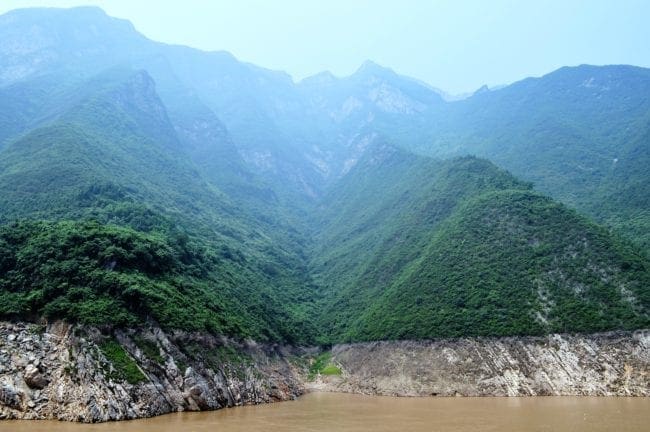 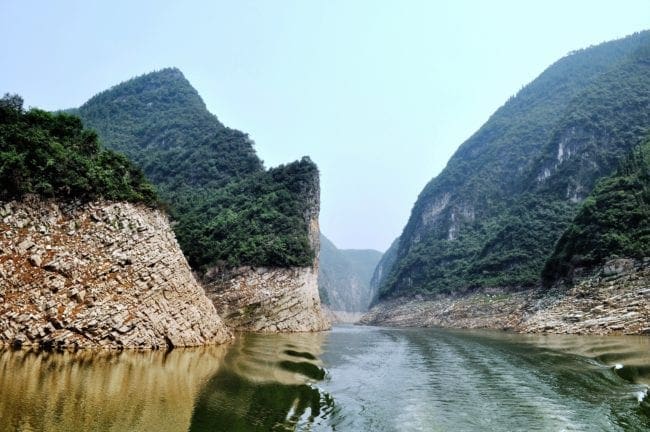 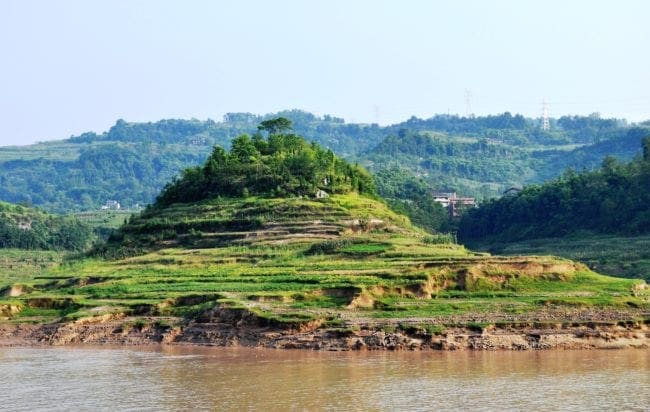 Today we are sailing through the Three Gorges: Qutang, Wu and Xiling . Unfortunately it’s so hazy I can only just make them out. The steep walls are impressive, but nothing spectacular. Maybe they were more imposing before they built the dam and the river was 80 metres lower. Never mind, it’s still relaxing, lolling on my balcony and watching all the life on the river. And an eighty year old Canadian-Chinese lady has instructed everyone on how to Photoshop their pictures. She says it’s much easier on a Mac though!

The second and third gorges, though less sheer, are prettier than the much lauded first. I prefer the mountains with the stalky green steps of the rice terraces leading up to their pointy peaks. The mist gives the scenery an ethereal beauty. (Though there is still the odd power station or two).

Today’s shore excursion is a trip up the Small Three Gorges (Lesser Three Gorges) of the Daning River, namely "Dragon-Gate Gorge", "Misty Gorge" and "Dicui (Emerald) Gorge". So, we traipse off our big boat and onto a slightly smaller junk, which takes us up the gorges, until we get on much smaller pea-pod boats that are rowed and poled in combination by the local Tuja people. They tow us up to and across some shallows, just to show they can do it and then the whole thing is repeated backwards. Not so long ago, according to pictures we are shown, they used to do the towing naked, but tourist sensibilities have put paid to that. Caves, coffins (suspended). monkeys, mandarin ducks and other water fowl are all on offer. 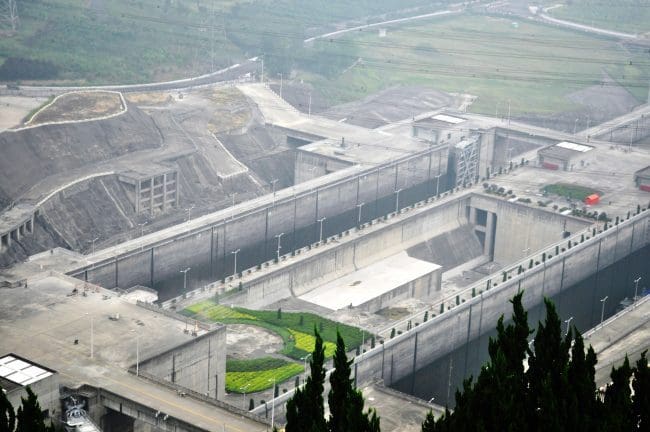 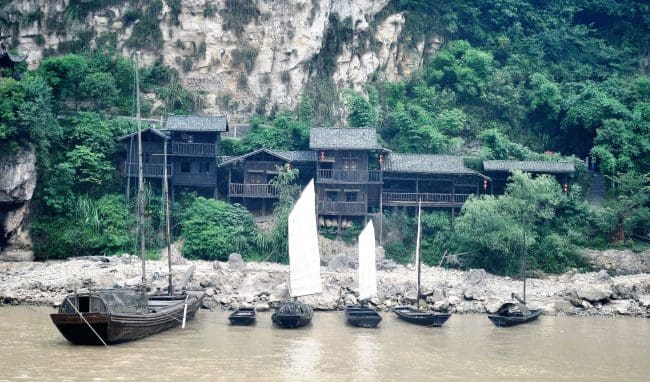 A damp squib of a day. We had to get up at a ridiculous hour for a trip to the Three Gorges Dam site at Sandouping City, where we couldn’t see much of the almost-but-not-quite-biggest-dam-in-the world, because of the fog. As someone on the bus remarked ‘Nothing about a vacation should begin with a 6!’ The view in the last gorge, below the dam, picturesque old wooden villages, gives a flavour of what the scenery was like in the rest of the river, before they flooded it. Then a flight back to Shanghai, which is three hours late, because there is a thunderstorm above us.