Rob made camp and then saw a lion make its kill on a rocky outcrop, so he decided to claim this land, and set up his farm there, just outside Karoi. Zimbabwe, then called Rhodesia, after the World Wars, was a beautiful country, rich in minerals and agricultural possibilities.  It was first settled by the Shona (Bantu) peoples and, in the west, the Matabele.

The British South Africa Company of Cecil Rhodes conquered first Mashonaland and later in 1893 Matabeleland after a fierce resistance by the Matabele - the First Matabele War. Company rule ended in 1923 with the establishment of Southern Rhodesia as a self-governing British colony. (Northern Rhodesia became Zambia.)

He enclosed and settled a large area and, as was the colonial custom, used the local people as labourers. They had their own village of mud huts, and enough to eat, but they were pitifully poor.  They helped Rob build his farmhouse and outbuildings and the acreage of maize grew year by year. Later he experimented with coffee. It grows well on the plateau. Other farmers were successful with tobacco, but Rob left it alone. Too labour intensive.

There were few women out in the wilderness of the bush, a harsh life. So Rob wrote to England for a pen pal and was put in touch with Mary. They corresponded for a year or so and then Rob proposed. She accepted and went out and married him. They had three children. 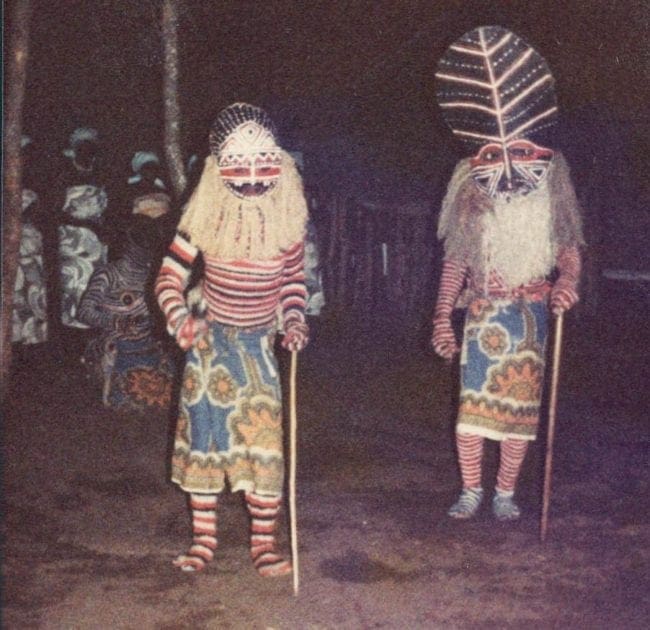 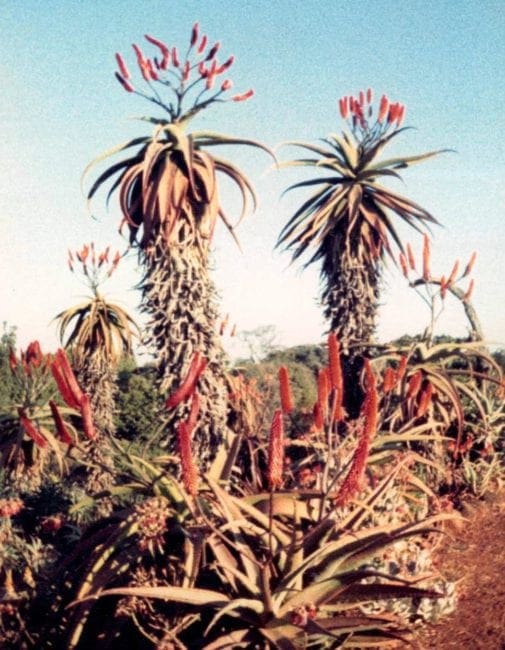 Mary was my husband Don’s aunt and we visited not long after UDI was revoked, A peace agreement was finally agreed in 1980 and Zimbabwe became a sovereign nation under Robert Mugabe. Rhodesia was renamed Zimbabwe and the capital, Salisbury, became Harare.

The Karoi area was rich with coppery blue lakes and waving maize in every direction.  We stayed in Rob Junior’s little house, tiptoeing over the compound every night to bed, avoiding waking the geese and wary of dozing puff adders. It was a true pioneer’s cottage. Rob had a gnome’s waving beard and spent every evening seeing how many bottles of beer he could put away. He would knock them back with his feet up on a stool and lob the empties into the fireplace when he was done.

Rob had two identical black labs called White and Red. Their names corresponded with the dabs of paint on their rumps. Mary had a spoilt dachshund and a Weimaraner puppy that bit everyone.  Mary hated the two labs and would shoo them out of the front door. They knew the drill. They ran round the side of the house to the sitting room window, which Rob would open so that they could jump back in. They’d be sitting in front of the fire again by the time she got back to the living room.

We travelled around the country. For some bizarre reason Rob and Mary decided to pay for just one of us to go on a trip to Victoria Falls and the Wankie Game Reserve (now called Hwange).  They said they would loan us the money for the other person. We had been led to believe it was a pre-paid trip. You weren’t allowed to take much money out of the UK in those days. Not that we had any; it had taken all our cash to pay for the flight.  They later felt guilty and commissioned Don to design an irrigation dam for them. The fee exactly covered our extra expenses. All the same, it was a wonderful few days.

When we came in to land at Wankie, in north west Zimbabwe, they had to clear the impala off the landing strip.  My first safari drives - amazing. lion, buffalo and huge herds of elephant. Hwange has now become famous as the place where Cecil, the lion was killed. by Walter Palmer in 2015. he had a permit! Two years after Cecil's killing, his son Xanda met a similar fate. 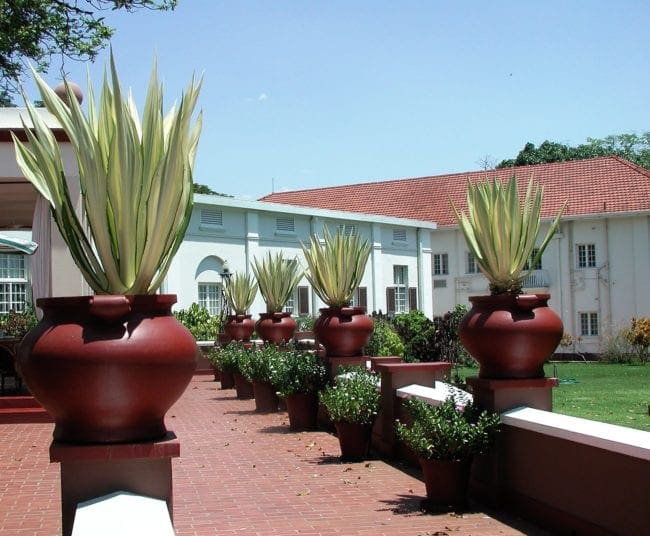 Victoria Falls has the accolade 'the largest waterfall in the world'. On the Zambezi River, between Zimbabwe and Zambia, they are not the widest or the highest. But with all dimensions taken into account, including almost the largest flow rate, this is considered to be the biggest curtain of falling water in the world. The falls were deserted and stunning. There were few visitors. Tourists were naturally wary after the war. A spray covered Chain Track led from the colonial splendour of The Victoria Falls Hotel along the top of the chasm opposite the cascade. The ground reverberated and we got soaked. Bushbuck peeped out of the rainforest and there was a fresh lion’s paw print in the mud.

The Zambezi River is not only the border between Zimbabwe and Zambia. It's the fourth-longest river in Africa, the longest east-flowing river in Africa and the largest flowing into the Indian Ocean from Africa. The Kariba Dam was built to flood the Kariba Gorge and create Lake Kariba, the world's largest artificial lake and reservoir by volume. Lake Kariba was filled between 1958 and 1963.

The stark grey branches protruding out of the blue waters of Lake Kariba were awesome. Also awesome were the stories of Operation Noah, set up to rescue the displaced wildlife. In a wildlife rescue operation lasting 5 years, over 6000 animals were rescued and relocated to the mainland. Wildlife was moved from the rising waters and largely relocated to Matusadona National Park.

The town of Kariba was built for construction workers on the lake's dam. Houses were also required in the locality for displaced villagers. 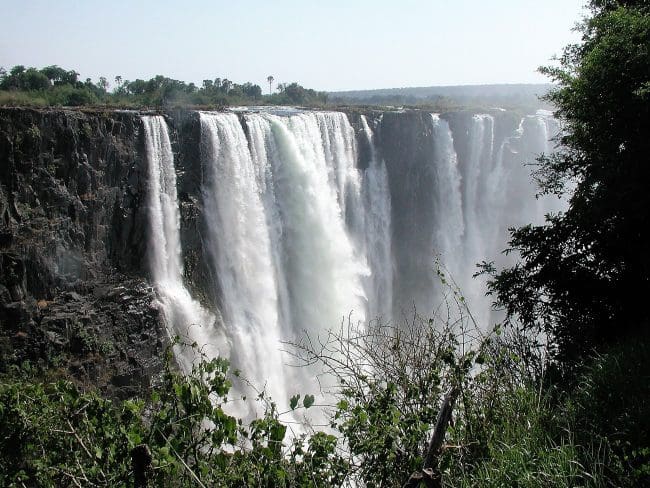 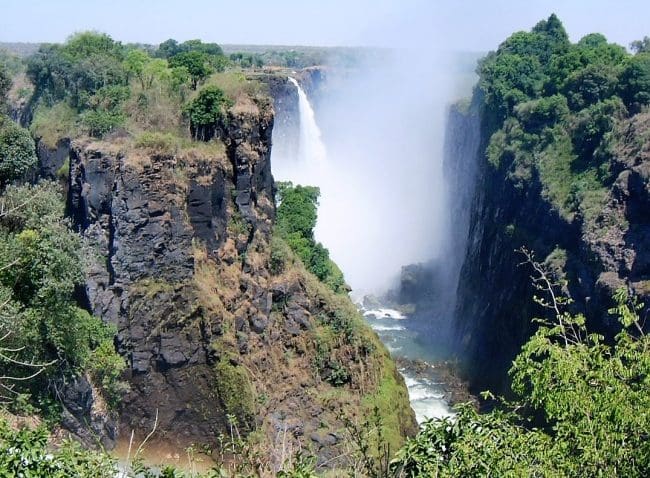 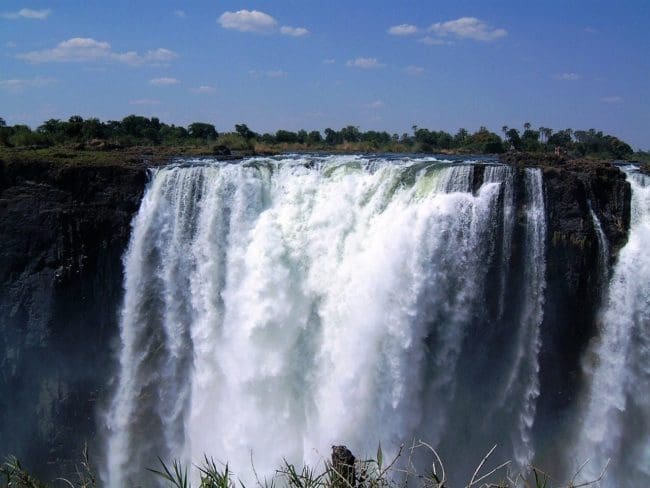 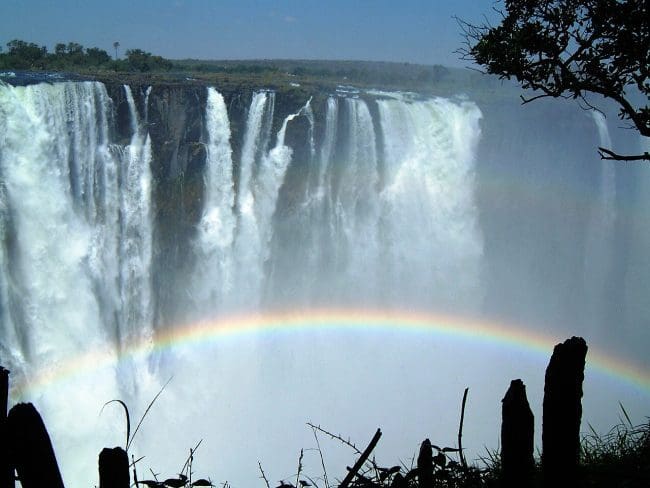 Up the Zambezi River

Later, Rob took us camping on the banks of the Zambezi, venturing illegally into Zambia.  Our tent was so small that we couldn’t decide if we should allow the hyenas to nip our heads or crunch off our toes. Rob had a much bigger tent and a mattress. ‘Why didn’t you bring one too?’ he asked. Knowing they existed would have been a helpful start. He set out to make the experience as terrifying as possible.  We fished for vundu (ugly whiskery catfish) and fearsome tiger fish with soap bait on the river and watched the hippos scuttle around us. Rob told us how fearsome and territorial they were. One stuck its head up in front of us, just as our little speed boat was zooming along. We shot straight up and over its back.

There were plenty of crocodiles around too. Rob insisted on using his dinner steak for bait, on a long thick steel line. Don did the same, all strictly illegal. And the crocs weren’t stupid. They took the meat and avoided the hook every time. I refused to let the men have any of my steak, come supper time.

Rob and his younger son terrified me with stories about the savage sting of the tsetse flies, so it was poetic justice when Michael got stung on the way home, travelling in the back of the trailer. Rob blasted over the dusty tracks and shot through the maize on the look-out for leopards and springbok. The latter, of course, were legitimate game and made good biltong. The drying shed was decorated with tender strips, much nicer than the tourist variety. There was also a collection of python skins from snakes killed in the river.

Venturing south, in Harare we stayed in the colonial and respected Meikles Hotel. We drove to the second city of Bulawayo, the preeminent Matabele city and Bight Bridge. We moved on from the latter swiftly, hostilities were ongoing.

Next, Inyanga National Park, now Nyanga. this is the highest land in Zimbabwe, rolling hills, with Mount Nyangani, the highest point in Zimbabwe, at the centre. Mutarazi Falls, Zimbabwe's highest waterfall, is in the south of the park. There are also velvety tea plantations 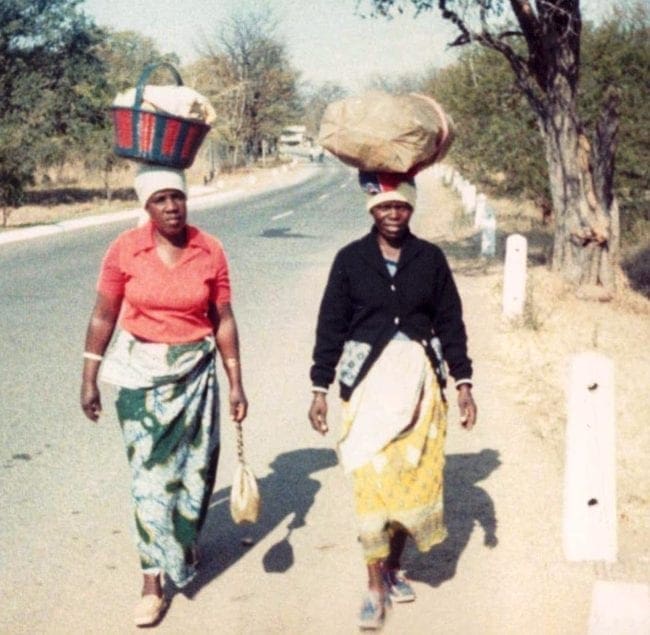 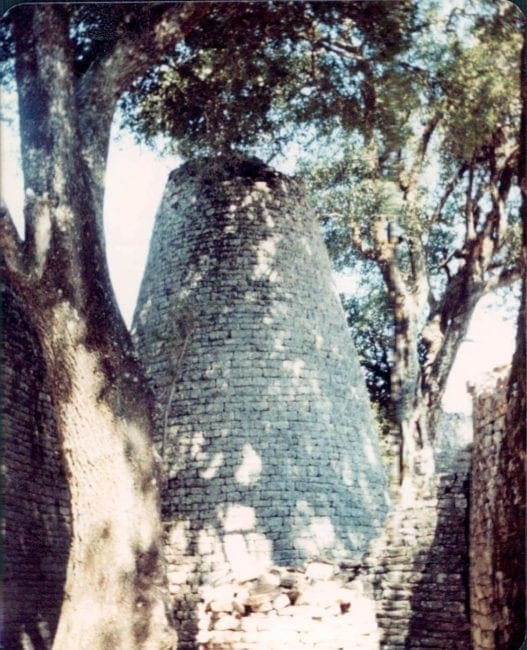 And then, in the south, the ancient, surprising and as yet unexplained Zimbabwe Ruins. This is a UNESCO world heritage site, a medieval city state, dating from the ninth century onwards, about which little is known. It's thought that the stone city could have housed up to 18,000 people at its peak, and that it served as a royal palace for the local monarch. The drystone walls are up to 11 metres high.

One theory states that it was built by the Bantu people (who would become the ethnic Shona) and that it became one of the major African trade centres by the eleventh century. By the mid fifteenth century, for some reason, the city-state had been abandoned. Whatever its origins, the jungle clad Great Zimbabwe has since been adopted as a national monument by the Zimbabwean government, and the modern independent state was named after it.

The trail though the maize was literally blazed at times. Itinerants or political protesters were setting fires often enough to be a genuine threat to their livelihood. Rob would go out on the tractor, harrowing the ground to put out the flames. Once he took us with him. This was rather too much excitement for me and I was naïve enough to think that he knew what he was doing and that the fuel was unlikely to ignite. We were lucky.

A year later Don’s parents made a similar trip to Zimbabwe and Rob and Don’s father went firefighting. But they weren’t quick enough to extinguish the blaze and were encircled by the flames.  They were both rescued and recuperated in hospital. Don’s father seemed to regain his full health, but Rob’s lungs were damaged; he died a year later.