This is a trip I’ve been wanting to make for a long time; we learned so much about the Holy Land at school - I’m expecting a very spiritual experience. But my trip has become much too scary before I’ve even left home. Saddam Hussein, with immaculate timing, has invaded Kuwait and the Middle East is in uproar. We’re wondering if the trip will be cancelled but the FCO haven’t declared Jordan a no-go zone, even though Israel is polishing up its rockets, and the tour goes ahead.

Amman, the Capital of Jordan

Naturally, by the time my plane lands, the FCO has changed its mind, but we’re here now. David, our tour leader tells us to keep our head down, in all senses of the word. The British are not very popular here currently and sightseeing in Amman is off. Amman is still our starting point. and we catch glimpses off the modern mixed with the ancient. The earliest evidence of settlement in Amman dates to the 8th millennium BC. Atop Jabal al-Qala’a hill, the historic Citadel includes the pillars of the Roman Temple of Hercules and the 8th-century Umayyad Palace complex, known for its grand dome. Built into a different downtown hillside, the stone Roman amphitheatre has a 6,000-capacity.

We’re not too oppressed, though there are some surly faces and a few internationally recognised gestures in our direction. It’s ironic that Amman was the original Philadelphia - City of Brotherly Love. It was re-named, for a time, after Ptolemy II Philadelphus, the Macedonian ruler of the Ptolemaic Kingdom, who reigned from 283 to 246 BC. (after himself, of course), 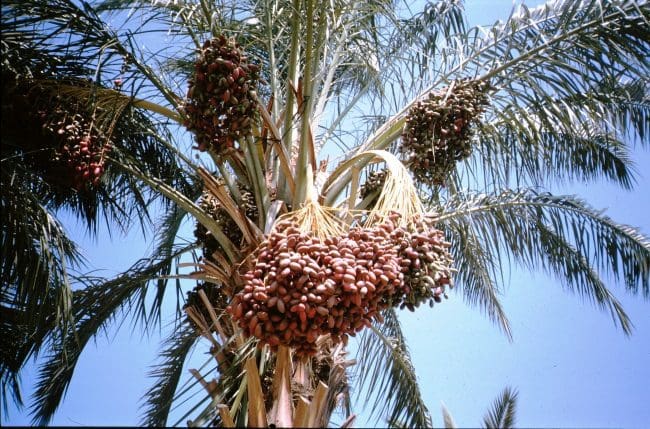 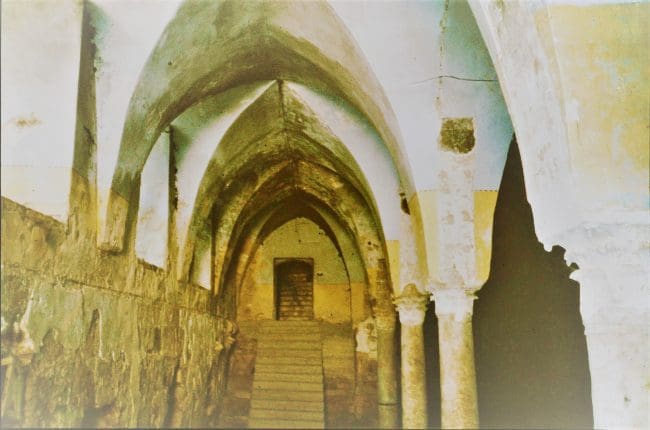 The area where modern-day Jordan exists has been inhabited by humans since the Paleolithic period. Three stable kingdoms emerged there at the end of the Bronze Age: Ammon, Moab and Edom. In the third century BC, the Arab Nabataeans established their Kingdom here, with Petra as the capital. Over the years the land was incorporated into the Assyrian, Babylonian, Roman, Byzantine, Rashidun, Umayyad, Abassid, and Ottoman empires.

After World War I, the Greater Syria region was partitioned by Britain and France. The Emirate of Transjordan was established in 1921 by the Hashemite, then Emir, Abdullah I, and the emirate became a British protectorate. In 1946, Jordan gained independence and became officially known in Arabic as the Hashemite Kingdom of Jordan. The country captured the West Bank during the 1948 Arab–Israeli War and annexed it until it was lost to Israel in 1967. Jordan renounced its claim to the territory in 1988, and became the second Arab state to sign a peace treaty with Israel in 1994. 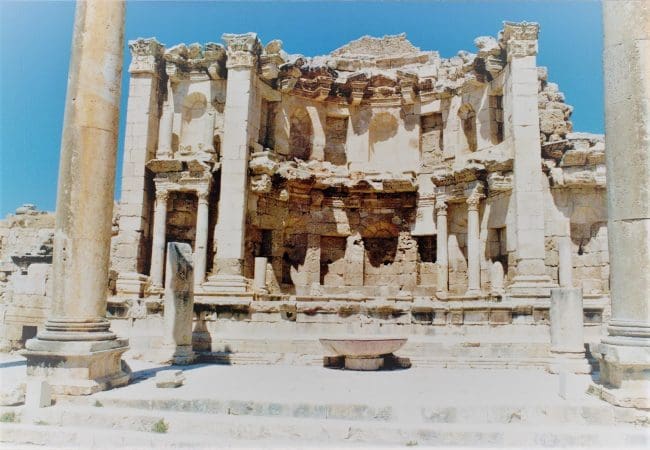 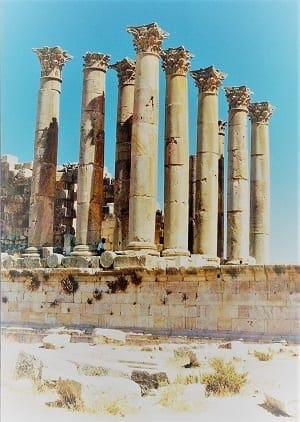 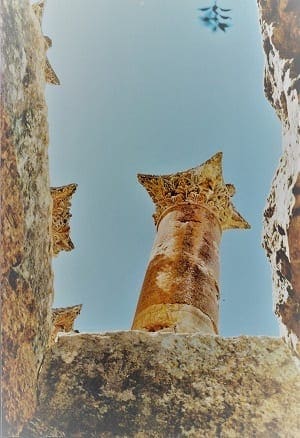 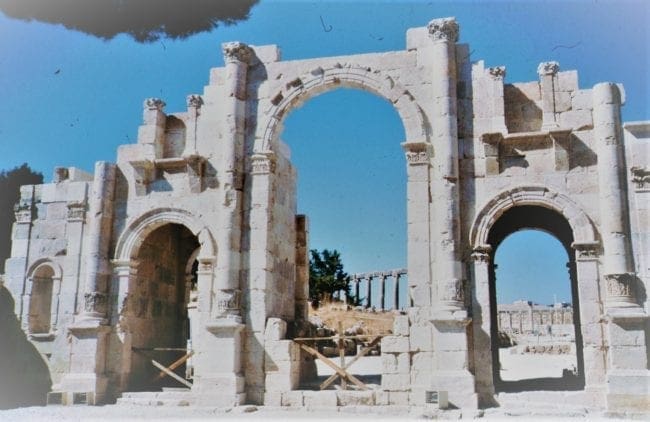 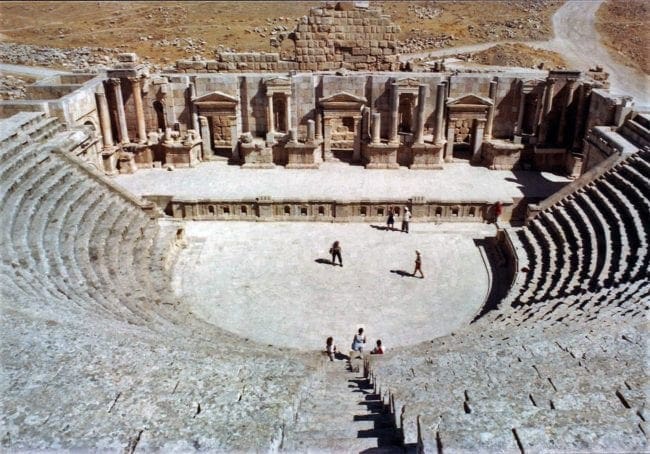 Jordan is home to many biblical sites including, among others, the Jordan River, where Jesus was baptised by John, as well as the sinful cities of Sodom and Gomorrah. Ancient Jerash, located in the Gilead Hills is still a sightseeing possibility. The itinerary says that ‘this beautiful Roman city (Gerasa) is considered to be the best preserved of the Decapolis, a confederation of ten Middle Eastern cities established by Pompey’, but I believe it’s the only one to have survived at all, in any meaningful way. There’s plenty of colonnaded streets, theatres, temples, baths and an oval forum to be admired.

Next, south west of Amman, to Madaba. This is home to the sixth-century mosaic map of the Holy Land, in the Greek Orthodox Church of St. George.

Northwest, the biblical hill of Mount Nebo overlooks the Jordan Valley, the West Bank, Jericho and the Dead Sea. Mount Nebo is an elevated ridge , approximately 710 metres above sea level. The Bible tells us that this the place where Moses was granted a view of the Promised Land before his death. (He was not allowed to reach there after transgressing.) A Brazen Serpent sculpture commemorates the event. It was created by Italian artist Giovanni Fantoni and represents both the miracle of the bronze serpent invoked by Moses in the wilderness and the cross upon which Jesus was crucified.

Mount Nebo crops up again in the Old Testament (Maccabees), as the prophet Jeremiah hid the tabernacle and the Ark of the Covenant in a cave there. There's also a Christian church from Byzantine times with some nice mosaics. 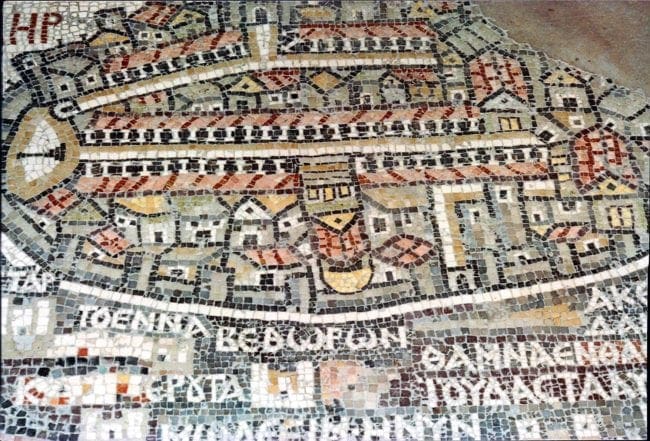 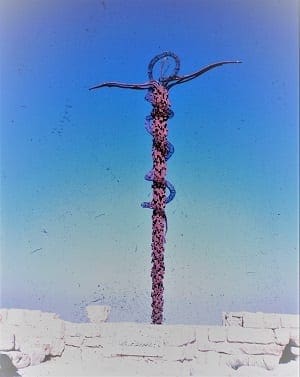 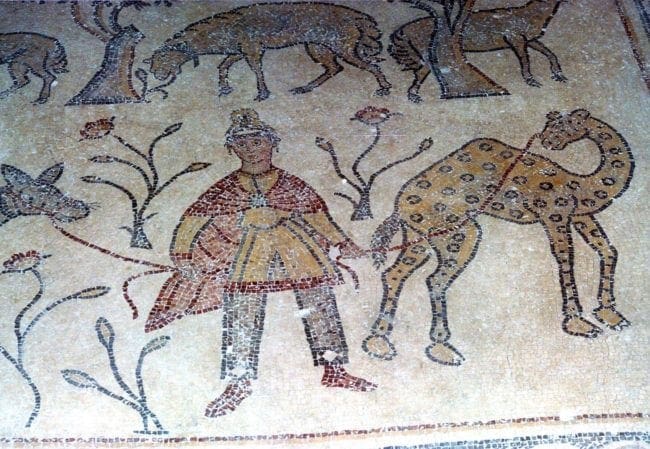 There’s a crusader castle or two, to take in. Kerak Castle is probably the most famous. Qasr Al Abd, is actually older than it first appears - it dates from Hellenistic times. Qasr Al-Kharana (below) is one of Jordan’s best-preserved and most frequently visited Desert Castles. It is located just 60 kilometres to the east of Amman, near to the Jordanian – Saudi Arabian border. It is believed to have been constructed at some point during the first half of the 8th century AD by an Umayyad caliph. so again, it's older than would be expected. Most of the castles are twelfth century, actually built during the Crusader Wars. At the time I’m more concerned with a distinct lack of toilets – gut rot has already set in. Perhaps the national dish, mansaf - lamb cooked in a sauce of dried yogurt hasn’t agreed with me. 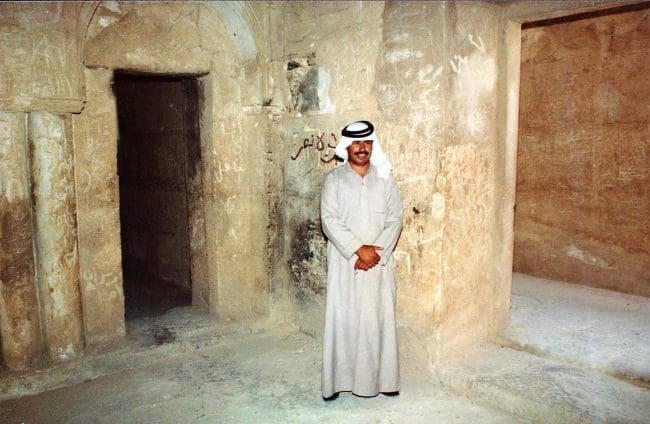 Then over the Allenby Bridge...

See Israel and Palestine for the next few days of this trip.

Back into Jordan, from Israel and down the King's Highway, roller-coastering over huge 'wadis' (valleys). We finally reach Nabataean Petra (sixth century BC), billed as one of the world's most outstanding ancient cities: ‘the rose-red city, half as old as time'. It’s deliberately located in the midst of mountains, most of the buildings carved out of the rock face, making it virtually unapproachable. This was to protect the riches collected in levies on caravans. We venture in on horseback (walking is discouraged), through the Siq, an exceedingly  narrow chasm. The first thing we see is the huge basilica of the (Khazneh) Treasury, made famous in Indiana Jones and the Last Crusade. Petra is  even more eerie than Jerusalem. All the other tourists have gone home. I expect it’s usually heaving, so it’s lovely to have it all to ourselves.

We are guided high and low - streets, monastery, tombs, cave houses, a wonderful theatre and shards of pottery lying in heaps on all the mountainsides. It is a unique and unforgettable place, enhanced by the play of light and shadow. 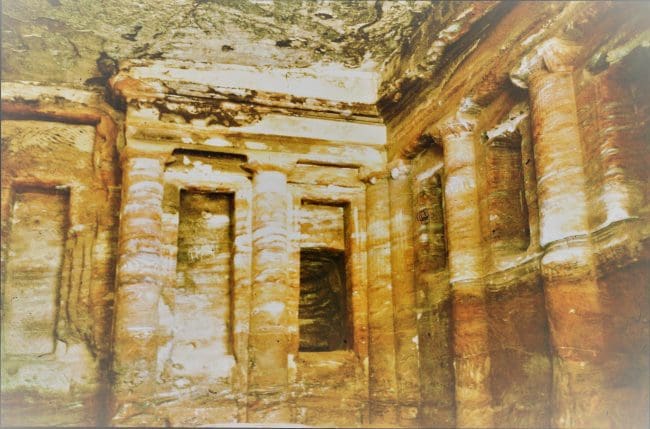 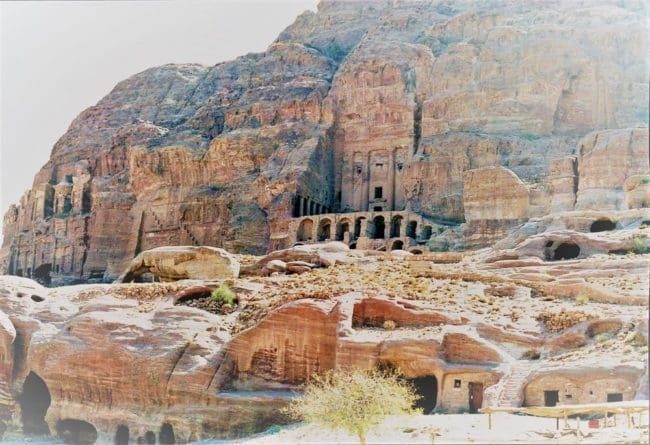 Onwards on the ‘fast’ Desert Highway, which is increasingly full of vans and trucks. Egyptians workers are pouring out of Iraq, to retreat to their homeland, in anticipation of a war. Wadi Rum, to the east, not so far from the Saudi border, is the largest wadi in Jordan. It's also known as Valley of the Moon (not a unique name by any means...) But this is how one imagines deserts to be, instead of the rocky desolate places they often manifest. It has dunes and dramatic sandstone mountains rising from the sandy desert floor. This is where Lawrence of Arabia operated - he described the landscape lyrically. And this is where part of the film was actually shot. (Sorry, some of my photos are not in good condition - it was a long time ago!)

The road south, to Aqaba, is now lined with vehicles, as the fleeing occupants wait patiently (some have been here for several days already),for a ferry back to Egypt. Jordan has just 16 miles of coastline along the Red Sea and Aqaba is a very important port city. This is my first opportunity to snorkel - and this area, of course, is famous for its coral reefs. But Aqaba is struggling with its influx of refugees and we are patently unwelcome. After my underwater adventure it’s time to go home.