Train across Poland to Warsaw

Just after the wall came down friend Jenny and I took a flight to Berlin and an overnight train across East Germany to Warsaw, capital of Poland. In 2020, I'm on the train to Warsaw again, continuing on my diagonal line south east through Czechia from Prague to the south of Poland and Katowice. Hills, flat plains and more hills, the fields covered in David Hockney style rolled hay bales. The churches still have tall thin spires, but small onion domes are creeping in below. There’s an area of small lakes.

The train is even more decrepit than the last one, in Germany. And I’m in a carriage with compartments. At the end, a tiled toilet that looks as if it was built in the 1950s. It’s a six hour journey, but there’s no dining car. A guy in the end compartment has a rickety trolley with crisps and wafers and coffee that he pours into containers that people have saved from Starbucks and the like. He also has a few packets of sandwiches he’s enterprisingly picked up at the local supermarket. 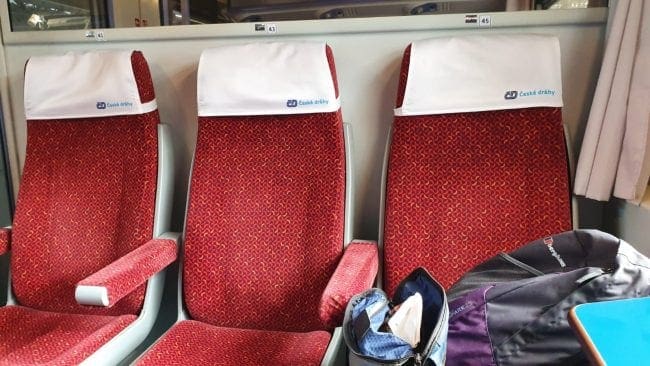 Someone is playing a video so loudly that you can hear it through the whole carriage. I go to investigate but it’s a burly security guy with a flak jacket and a gun in a holster, so I retreat quietly.

Over the border into Poland. We have to wait while they change locomotives. I’m the only passenger in the whole carriage at this point. The steward with the food says that this route is very quiet nowadays. The electricity has gone. And so has the Wi-Fi. It takes them over an hour to sort out the transfer. I’m not sure what’s happening - we’re shunted backwards and forwards several times. The steward doesn’t know either – he says the crew all speak Polish and he only understands Czech.

The upshot is that I’m half an hour late into Katowice, but that’s still enough time to find the right platform for the next leg to Warsaw. Surprisingly, this train is in complete contrast to the last one. It’s a smart Pendolino with waitress service and free food - mini buns on china plates. We whizz along – the views outside as far as I can tell through the blur are mainly farmland and birch forest.

Warsaw, the Capital of Poland

Once described as the 'Paris of the North', Warsaw was believed to be one of the most beautiful cities in the world, until it was ravaged in World War II.  Some of the damaged buildings were (contentiously) replaced by Stalinist architecture. Most notable is the  towering (237 metre high) Palace of Culture and Science, a 'gift' from Stalin, built in 1955. The Old Town (Stare Miasto or the Starówka) is UNESCO world heritage listed. It's a medieval layout, from the 13th century, with a market square and city walls, but most of the architecture dates back to the 17th and 18th centuries and most of that is restored.

Warsaw, When the Wall Came Down

Jenny has booked us a cheap hotel and we go to take a taxi there, so we can dispose of our backpacks. The drivers in the rank gesticulate at one particular car and we clamber in. The vehicle immediately starts to head out of town, the meter spinning at an astonishing rate. A tourist set up. We ask the driver to stop and he does. He is big and burly, and he won't open the boot until we pay up. We trudge back into the city with our rucksacks. It's hard work.

We meet an Australian girl, Karen and have breakfast for three for the equivalent of 40 pence. Bread and jam and red and white checked table cloths. Much of the old town is scuffed or under scaffolding. but there are still pointy castles, stepped gables and pastel houses.  The shops are all virtually empty, a few stacks of tins on the wooden shelves.

There are also plenty of churches, mostly Gothic  architecture, with a sprinkling of neo-classical.  Jenny insists on visiting every one we come across, even though I kept trying to divert her attention. The Church of the Holy Cross next to Czapski/Krasiński Palace, where Frederik Chopin's family lived, was the largest church in Warsaw at the beginning of the nineteenth century. Chopin's heart is buried under his monument here. There’s a commemorative plaque on the wall. His sister smuggled the heart from Paris, in a jar of cognac. The Nazis stole it during the war and banned the playing of Chopin's music. 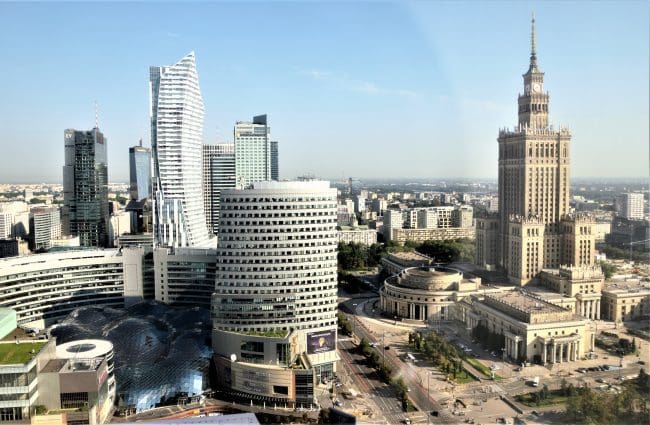 Warsaw has changed more than Prague. The first sight that greets me as I exit the (relatively) new station is the Soviet monolith - the Palace of Science and Culture. It remains majestically awe-inspiring and still the tallest building in the country. But now it’s surrounded by other skyscrapers, including the Marriott where I’m staying. I’ve got a great view over the palace from my bedroom window. In fact it's better than the view from the bar on the top floor. Though the bar provides better cocktails. 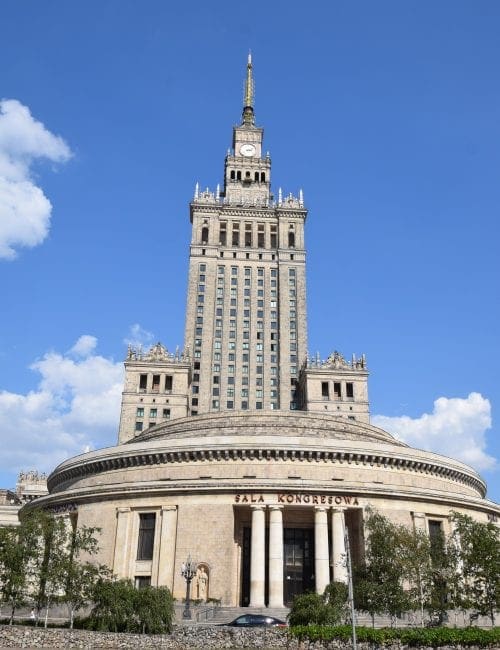 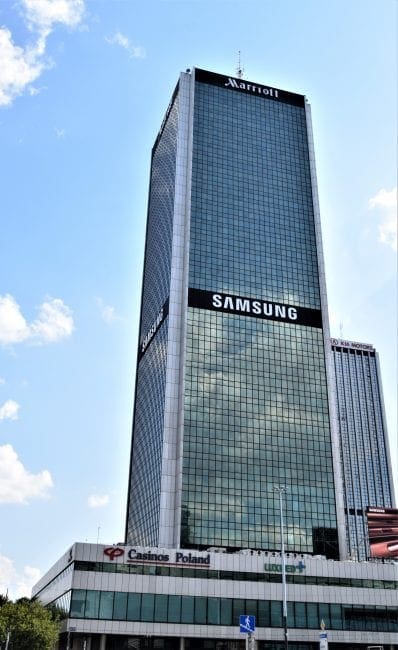 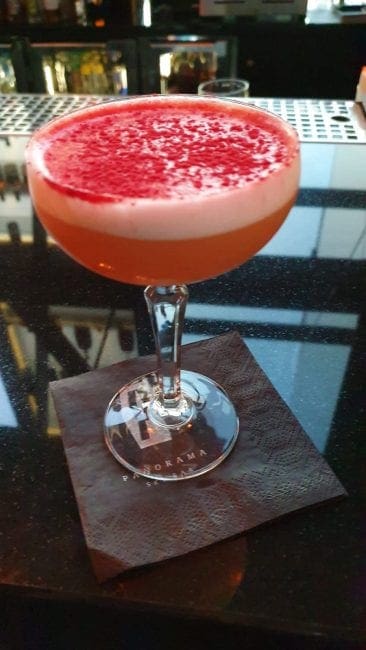 Since I was here they've created the Royal Route (1994) utilising the old communications paths. This road links the old town to the new and is lined with palaces, churches, statues  and parks. It’s an interesting affair, mostly grandly baroque, though I would have been happier if it were easier to find on a map. It’s over two miles from the Marriott to the Old Town and I accidentally manage to circumvent the Royal Route entirely, walking parallel with it most of the way. So I have to cover the same distance again, once I’ve found it, on my way back. 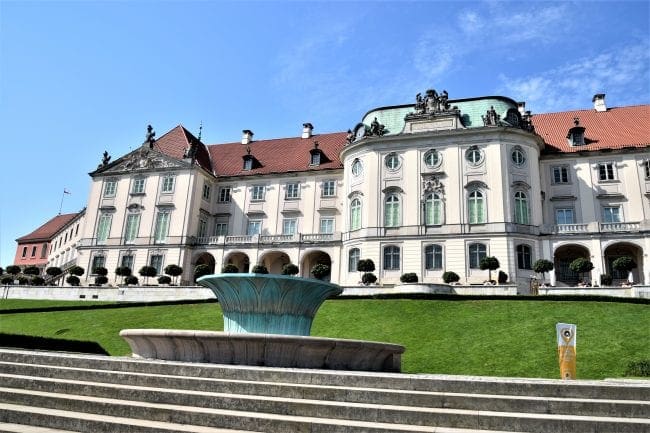 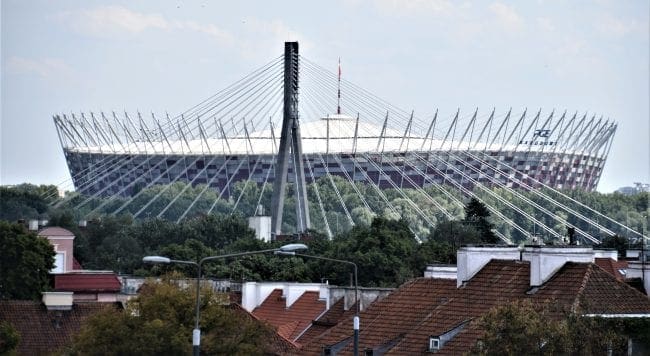 The streets are quiet, for the most part. The dusky red roofed Royal Castle above the Vistula River used to be the home of the Dukes of Moravia and the city grew up around it. Then it became the home of the Polish Senate. Now it's a museum. And it's closed. I clamber up the steep, urn bedecked garden paths and peer in the windows. There are panoramic views across the river to the National Stadium beyond and to the parks stretching either side. In normal years they feature fountain displays. There is no-one in those at the moment. 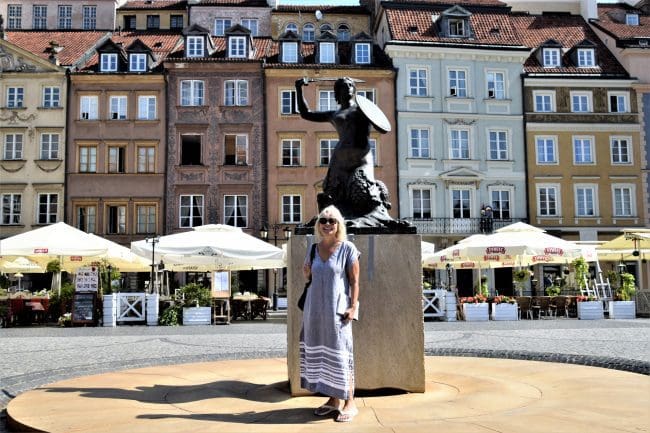 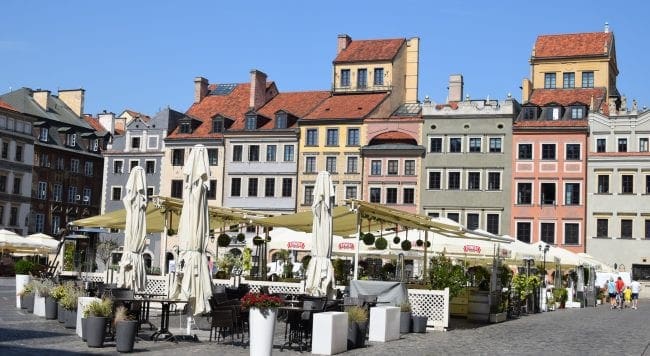 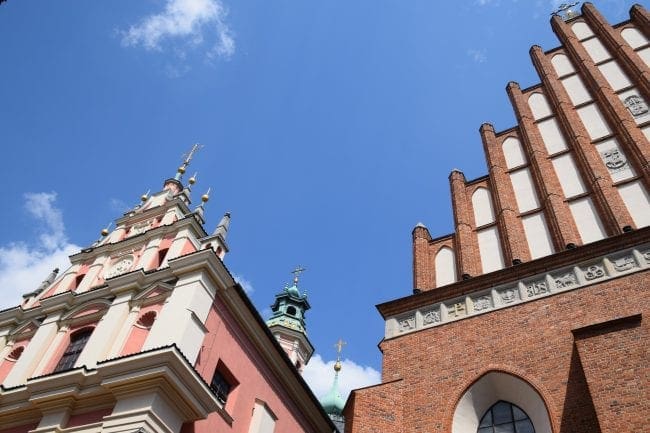 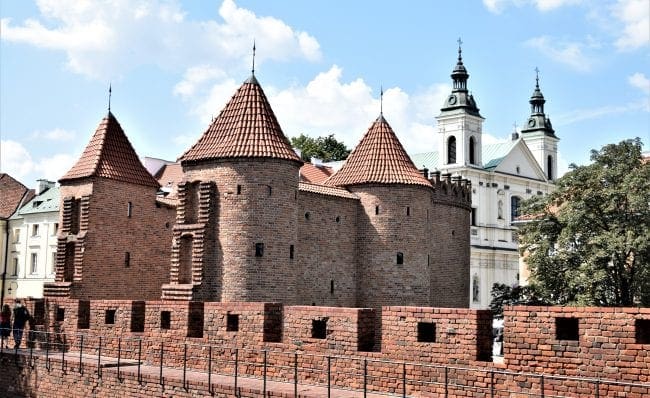 Beyond, leading to the Old Town, is Castle Square, with a tall column and Sigismund II up top. This is where the really interesting buildings start. The Old Town is much the same, but extended and cleaned up. Like Prague it’s now full of tourist cafes and restaurants with outside tables. The narrow streets showcase arches, courtyards and sundry decorative additions. Świętojańska Street is the main thoroughfare, joining the two main squares. Along here are some of Warsaw's oldest churches, including the brick, Gothic Cathdral, where the Dukes were buried. The Market Square, once home of fairs, showcases the most beautiful houses and is empty of visitors when I arrive. The buildings are copies of the original medieval merchants houses, replaced after the Second World War. They've done a good job, restoring them further over the years.

They're arranging the tables under the awnings in the cafes and an organ grinder is setting up in the centre. A surly girl refuses to serve me, but a more kindly young man across the cobbles is amenable and a few other tourists drift in and reward him with more custom. It's the same picture at the pristine four turreted Barbican (redundant almost as soon as it was built). 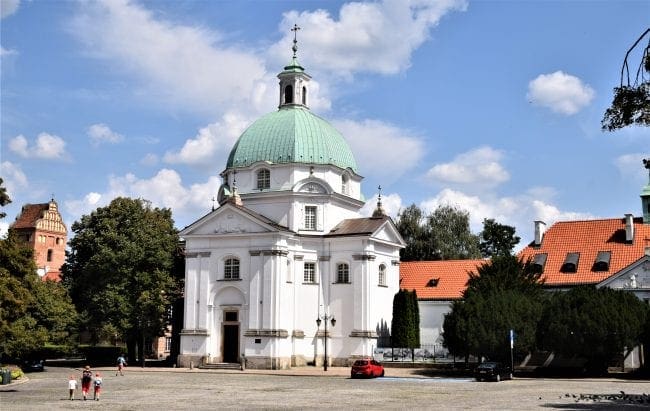 Here, and at the New Town, (this only dates back to the turn of the 14th century as an independent city), the other side of the Barbican, it’s very sleepy. The new Ol Town was also destroyed in the war and almost completely rebuilt. There are plenty more churches here, including the Military Cathedral with its twin towers. It's closed. There's also a New Market Square, several museums and more gardens.

There are at least 20 palaces in Warsaw, mostly now used as museums, or for state business. After the Royal Castle, the most impressive is probably the Presidential Palace, on the Royal Route, close to the Church of the Holy Cross. 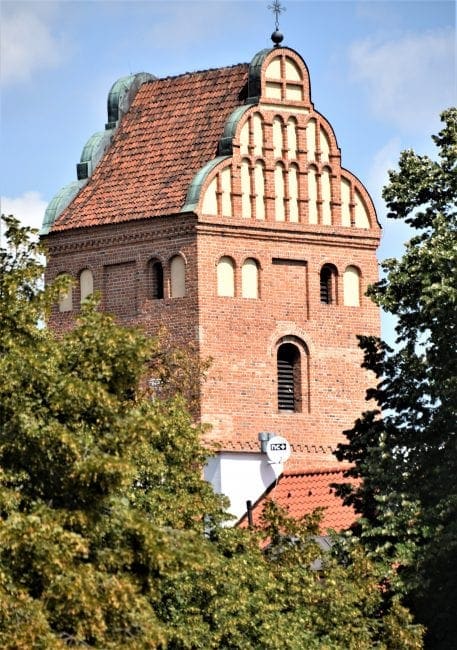 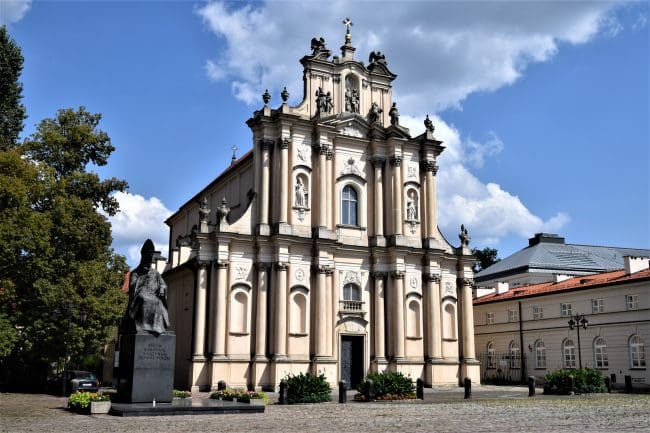 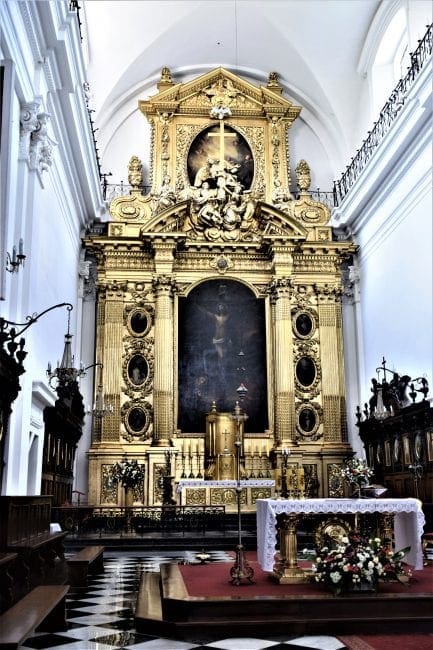 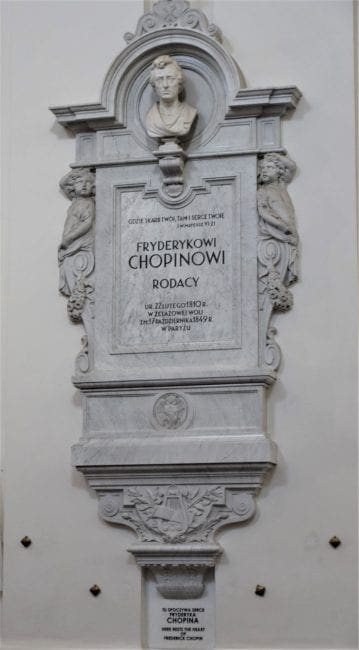 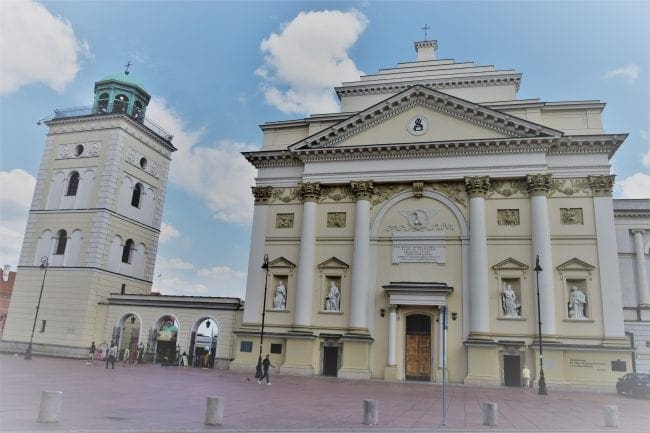 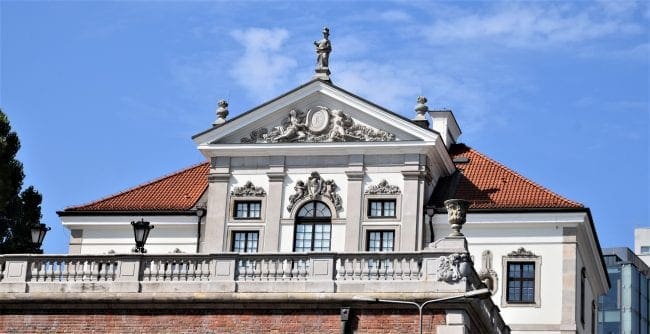 The churches - there are just as many as before and at least three cathedrals - are mainly shut. The Royal Route is lined with them. Though the door to the Church of the Holy Cross, housing Frederic Chopin’s heart is ajar and I slide in. The plaque is still there. and so is his heart. I'm told they exhumed it in 2014 to make sure it was still in good condition, well relatively speaking. There's very good ice cream in a little café opposite. Just up the road is Chopin’s house – a white porticoed museum.

Then there’s the theatre and the opera house and some more museums and more pretty gardens, with fountains. Endless statues of course, especially outside the various palaces – Marie Curie and Copernicus feature heavily, as do various kings and generals.

The mode of transport of choice here is the e scooter; these are rented out like Boris Bikes and zip along the pavement without warning, frequently cutting me up. The riders, it has to be said, are not always fully in control.  Nevertheless, it's a rewarding if exhausting day. It's been a very long walk. 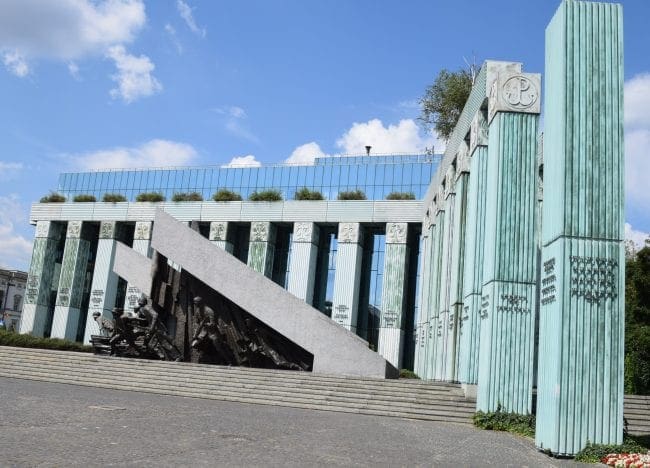 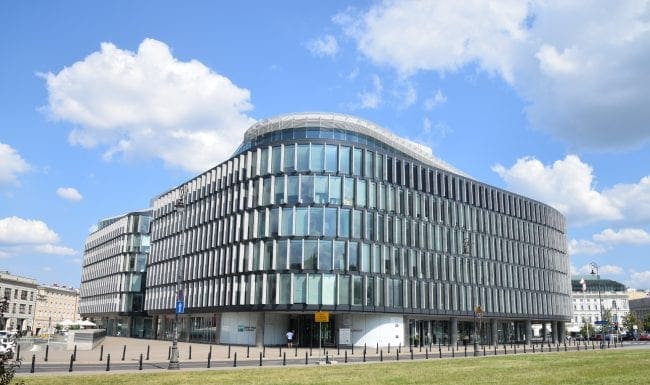 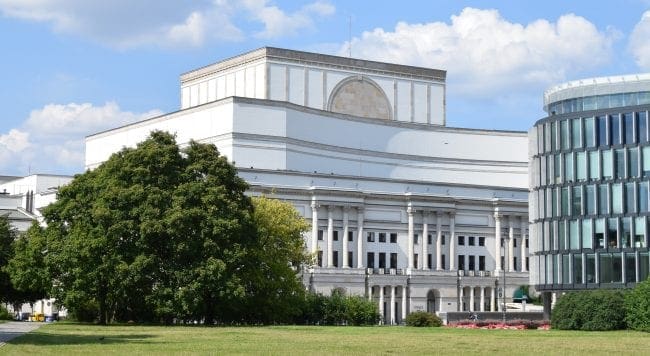 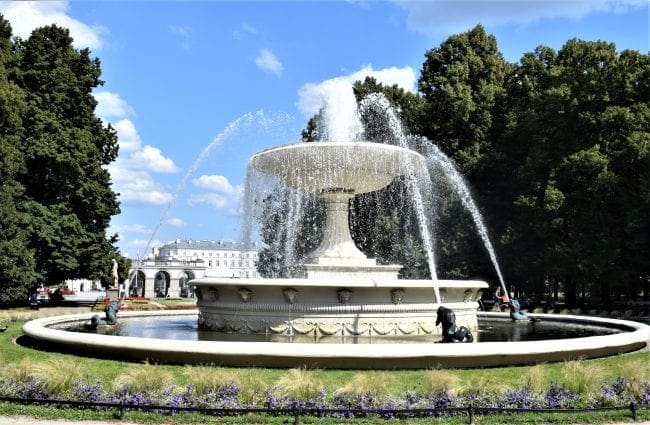 Back to Berlin and then Slovenia.