Over the border in my truck and eleven others from Botswana. I'm travelling one of the great classic overland routes: Victoria Falls in Zimbabwe to Cape Town, through Botswana and Namibia in a truck.

Namibia has been inhabited since pre-historic times by the San, Damara and Nama peoples and from around the fourteenth century by the immigrating Bantu peoples, who today constitute the majority of the population. In 1884, the area was colonised by the German Empire who named it German South West Africa. German rule ended in 1915, after a war with South Africa, and following World War I, the League of Nations handed administration of the colony over to South Africa. South Africa's rule included South Africa's laws and, later on, apartheid. Uprisings and protests against this regime led to the formation of the South West Africa People's Organisation (SWAPO) and many years of guerrilla warfare, Namibia finally obtained independence in 1990.

Namibia is the driest country in sub-Saharan Africa and one of the least densely populated countries in the world. Its economy is based on agriculture, mining ( diamonds, uranium, gold, silver and base metals) and tourism. Trophy hunting and ecotourism sit, somewhat awkwardly together. as the main sources of income. The country is home to a wide range of wildlife and Namibia is a feast of sights scenery wise. So, it's an exciting prospect. It's also advertised as the place to go for thrills and spills. I'm less excited about that. 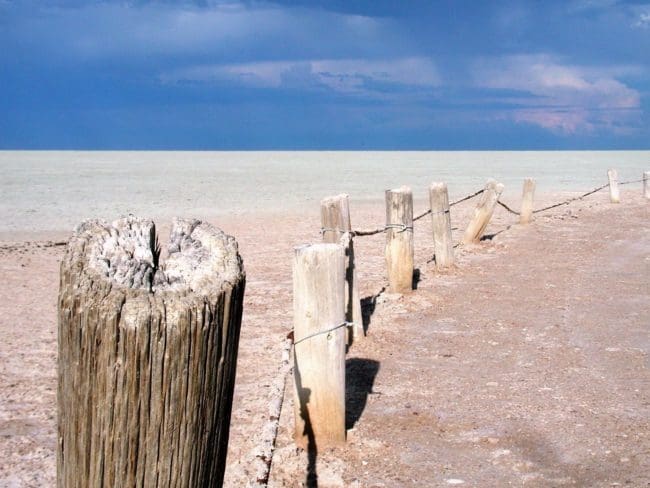 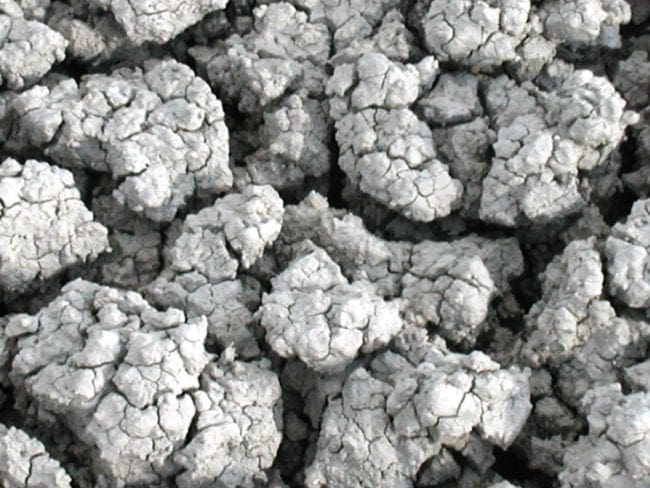 In the north, we overnight at three different sites based around waterholes in Etosha National Park. This is the third largest park in Africa, named after its massive salt pans (75 miles long), The word ‘Etosha’ actually means ‘great white place’. Lake Etosha was part of the larger Kalahari Basin in Namibia. It's thought that a shift in the tectonic plates cut the lake off from its river source, where it became an endorheic, or self-draining lake. Over time, the lake to dried out, leaving the salt and minerals we see today - huge glistening hexagonal (sort of) chunks.

The waterholes at the salt pans draw a huge variety of game including elephant, zebra, wildebeest, hartebeest, impala, oryx, black rhino, ostriches and giraffe. Meerkats peeping. Hornbills hiding. The game drives are amazing. Mongoose with babies skittering around one of the camps. An endearing baby eagle owl being dive bombed by night jars. At dusk, we sit in an amphitheatre watching the elephants lead the way down to drink. It’s a well-choreographed performance, as the fauna take it in turn to appear. Hyena enters right! 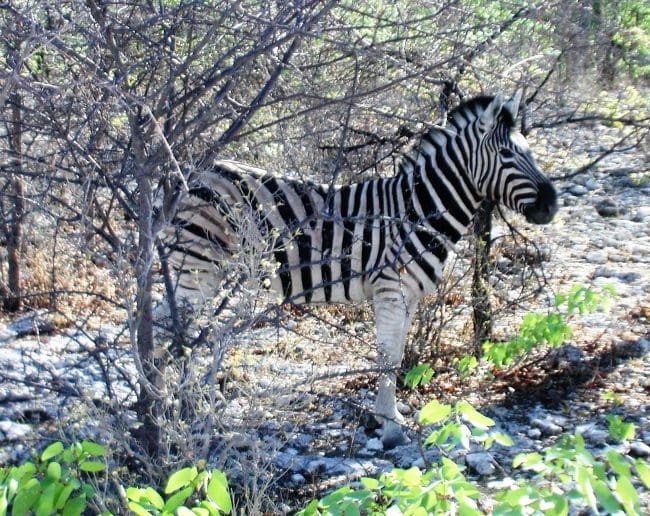 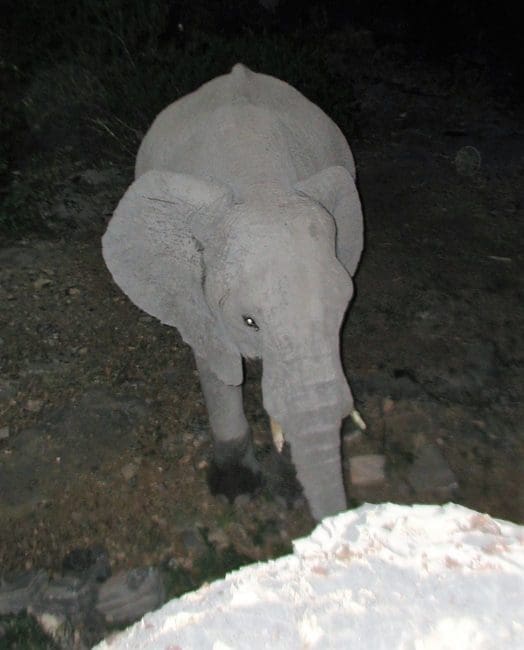 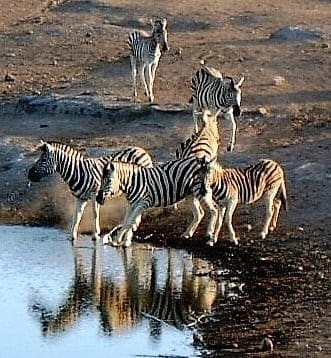 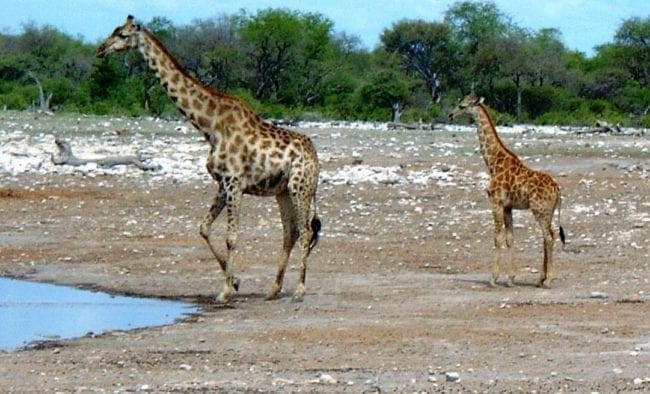 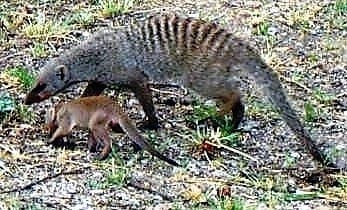 South to Twyfelfontein, in the region once known as Damaraland, after its original inhabitants. And a dramatic change of scenery. Mountains and a red and yellow Tequila Sunrise desert. This extremely arid area was the first to be UNESCO designated in Namibia, because of its ancient petroglyphs. There are over 2500 distinctive rock carvings and paintings on 212 slabs of rock, with 13 additional art rock slabs,, dating back 6000 - 2000 years (according to different sources). Some are badly damaged. Designation doesn't always mean protection and preservation. If you've read my other posts, you will know that I find it hard to get excited about rock art. There are many simplistic drawings of animals to admire, if you are so inclined.

Also, in Damaraland, the Petrified Forest, close to the town of Khorixas, Here, a deposit of large tree trunks have "turned to stone" through a process of diagenesis. There are at two large tree trunks, exposed, each 45 metres long, but there are apparently, many more in the area. It is thought that the trees were swept downstream by a large flood and covered by alluvial sands.

We camp by a dried up river bed, hopeful of sighting desert elephants. Liz sets up a chair on the dried up mud and offers Ali from Zambia a haircut “And where is modom thinking of taking her next holiday”. Our drivers, Brett and Sven, keep us dancing until we’re in danger of our clothes turning to rags. 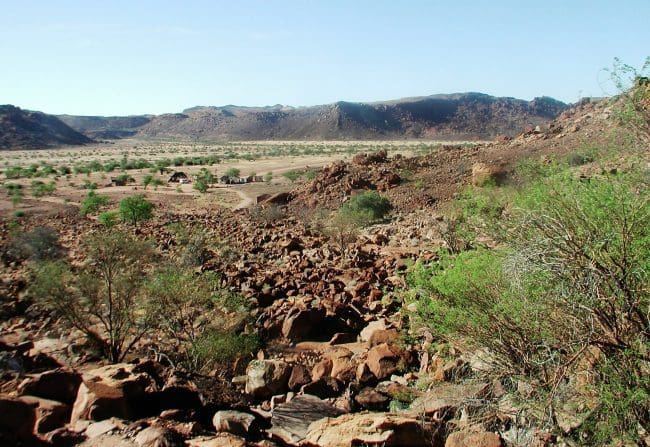 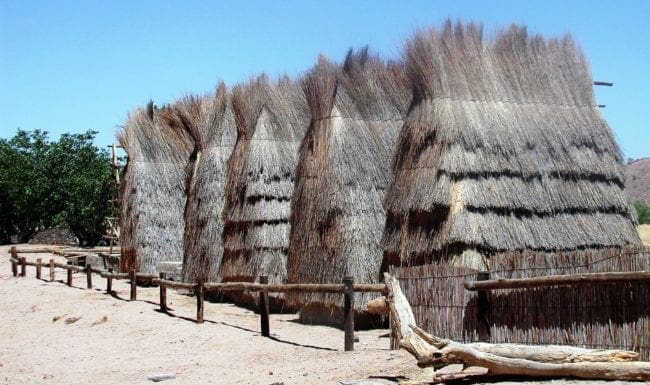 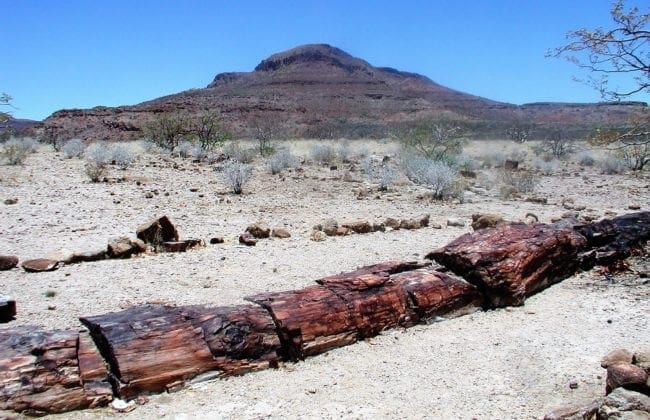 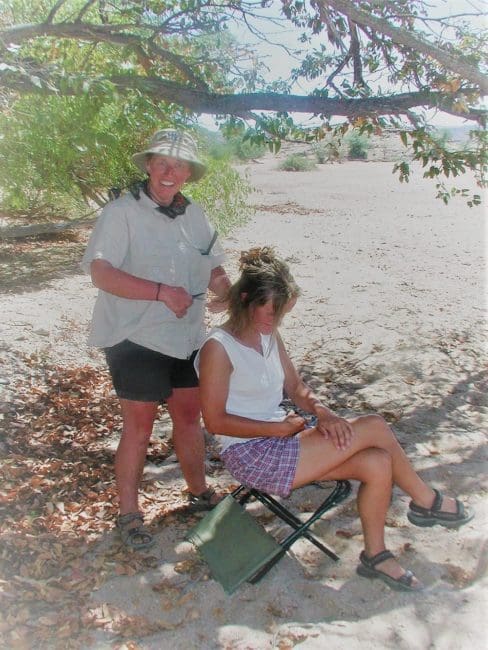 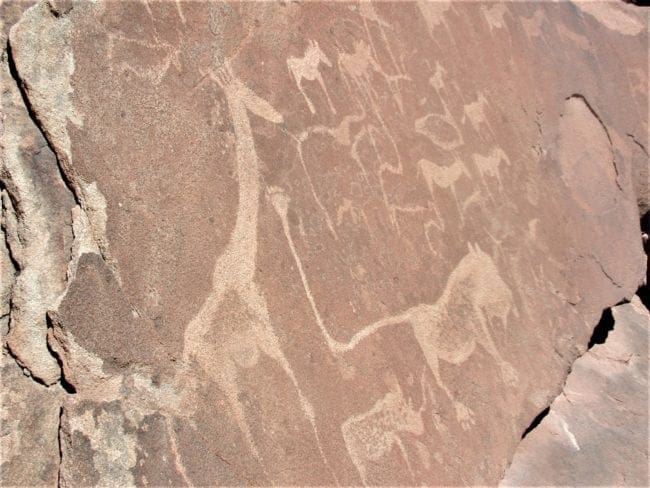 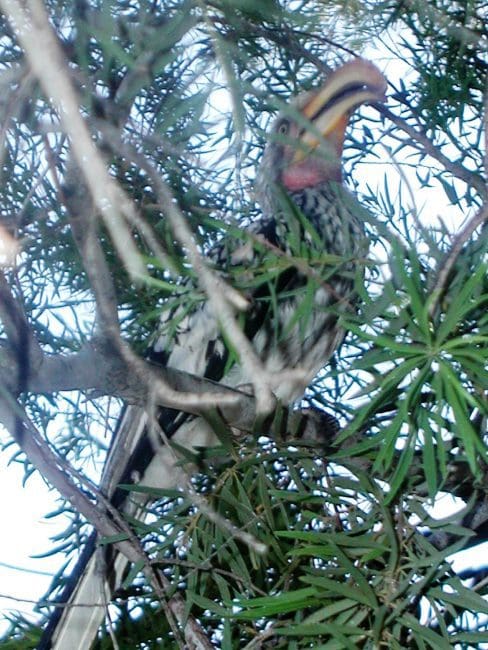 Further south it’s very dry,. Again, there’s a lot of very different desert scenery to traverse, multicoloured hues and some mountains. followed by marine sights on the renowned Skeleton Coast. This stretch of Atlantic coast is named for the whale and seal skeletons that proliferate along this treacherous coast. There are plenty of ship wrecks too. The cold Benguela Current is said to produce constant sea mist, making visibility difficult. We can testify that this is true. Very smelly basking seals are crammed into every inch of beach at Cape Cross. 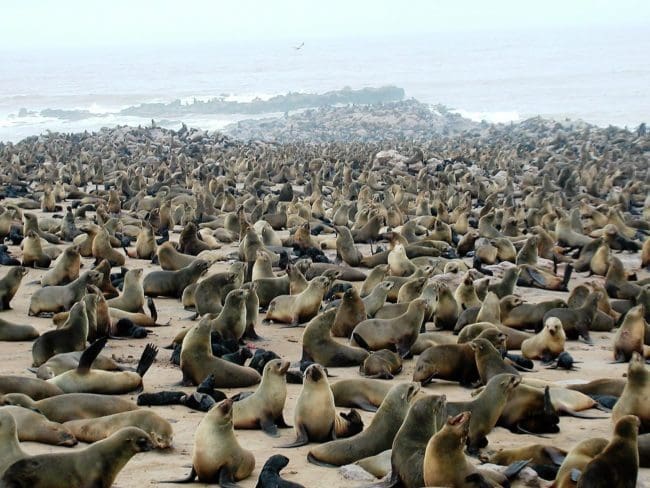 The wonderfully named Swakopmund, also known as 'Little Germany',  is surprisingly cool and has colonial-era buildings, just discernible through the fog. The main attraction here is affordable adventure (and cake shops). Quad biking on the huge dunes and skydiving beckon, but ballooning later on sounds much more restful. Brett and Ali go sky diving together and the shared frisson seems to be kindling a romance. while we're all dancing later at The Lighthouse. 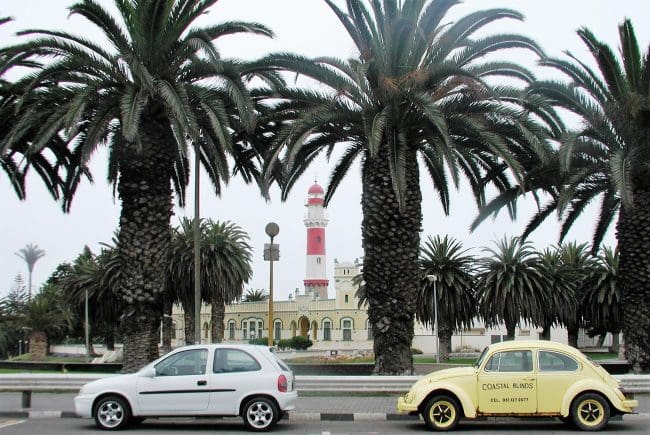 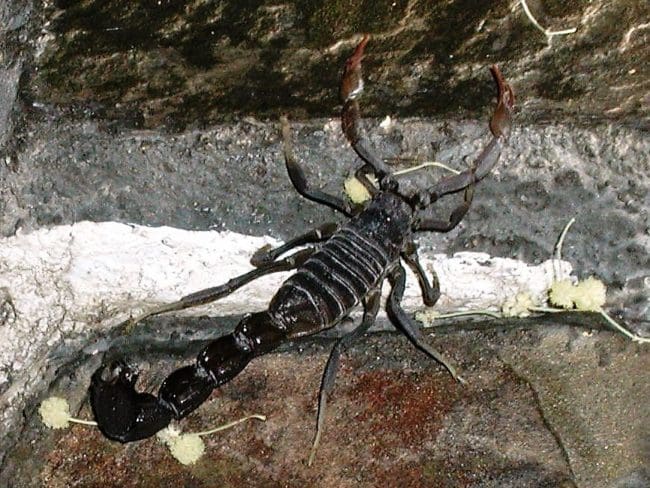 Flamingos carpet the water at Walvis Bay. the second largest city in Namibia. (The capital is Windhoek.) There are huge dunes sand dunes here - they're numbered and the biggest is known as Dune 7. This one is 388 metres and the highest in the Namib desert. More mountains, the odd canyon, alternating with vast stretches of flat desert. We're not doing so well with food today. At Solitaire we find a scorpion in the lunchbox. The town is a lonely truck on the edge of the Namib-Naukluft National Park , hence the name. Then, there's a sandstorm as we arrive in Sesriem. in the heart of the park. It's very atmospheric and very uncomfortable  and dinner is mainly sand. 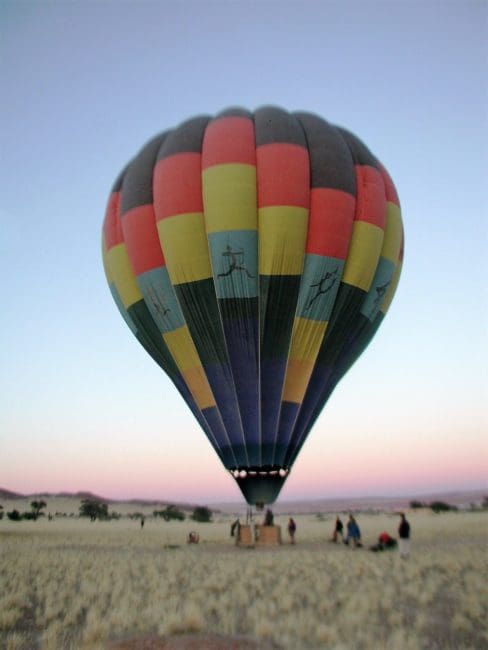 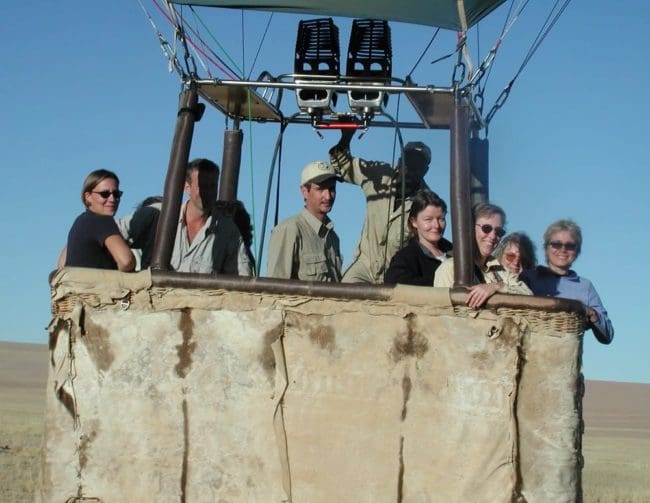 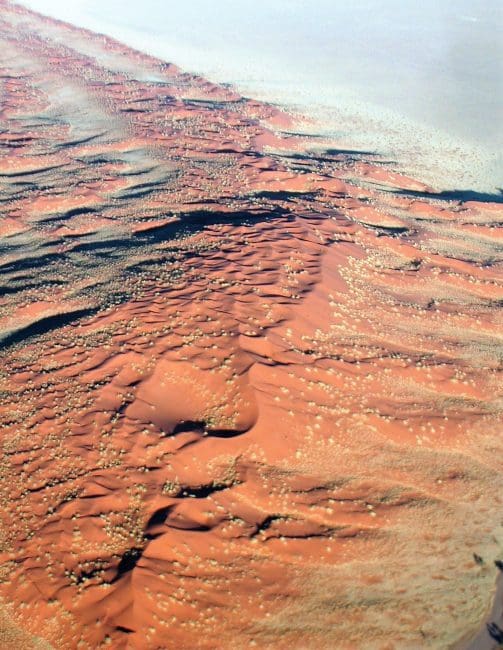 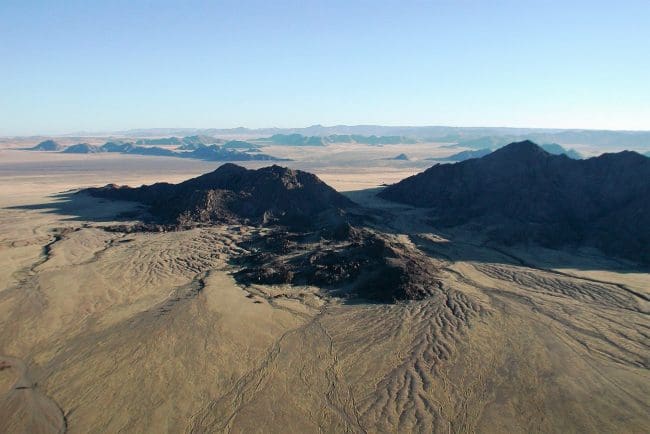 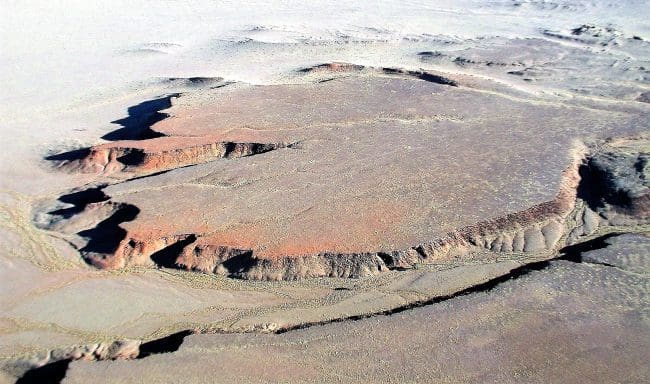 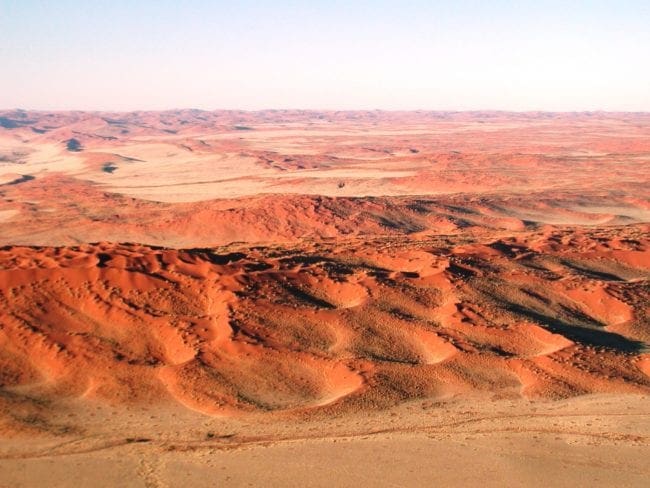 Sossusvlei, or 'dead-end marsh' is another endorheic drainage basin, a really dry one. As a result the fauna is small (ish) and resilient. Antelopes, rodents and retiles. A hot air balloon ride over the dunes here. These are purported to be amongst the biggest sand dunes in the world, with many over 200 metres. (They have a long way to go. Some in the Gobi desert are 500 metres.) The oldest dunes are blood red, the smaller ones vivid candy floss shades of orange-pink.

The dunes really glow at sunrise, as we drift past, and it's a great way to take in the incredible canyons and lunar landscape. We then partake of the usual après-ballooning champagne breakfast. Later, we scramble up some of the dunes. Number 45 is the most photographed because it's close to the road. It seems colossal, but it's only 170 metres high, very red and very hard on the calves. It's called 45 because its at the 45th kilometre on the road. The largest dune in this area is Big Daddy; that's 327 metres up. Next, Sesriem Canyon from the ground. The stark cinnamon landscapes and spiky plants work admirably together.

Our lunch is, literally, sand - wiches. 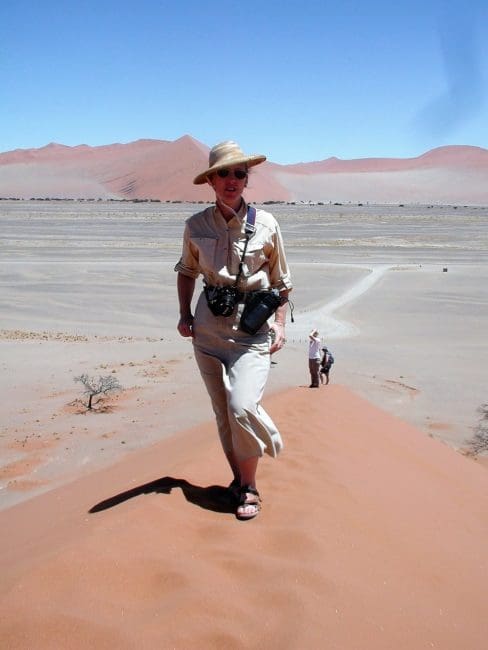 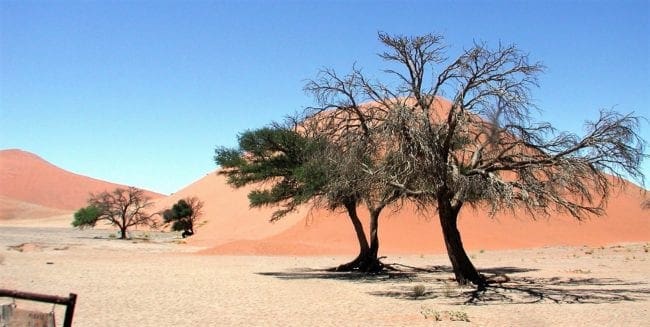 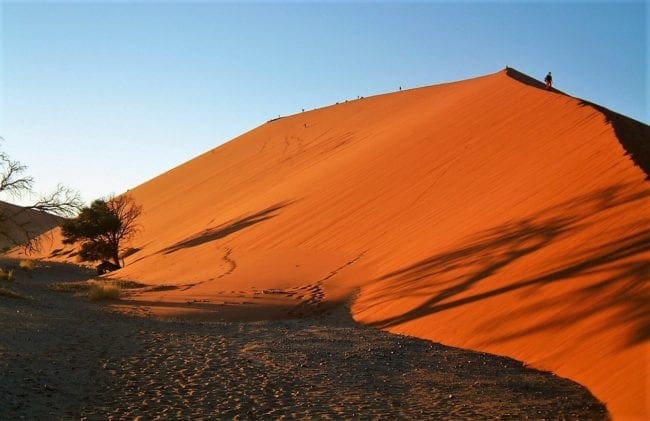 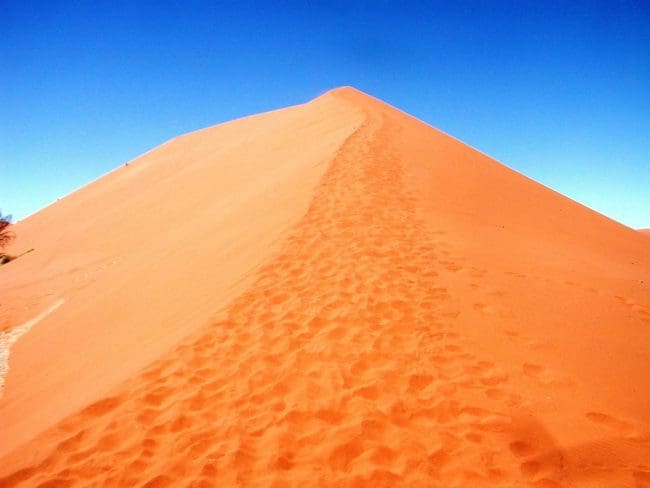 The starkly beautiful Fish River Canyon is the highest in Africa and the second largest on earth. It’s 550 metres deep, 27 kilometres wide and 160 kilometres long and over 500 million years old. The solitude is intense. 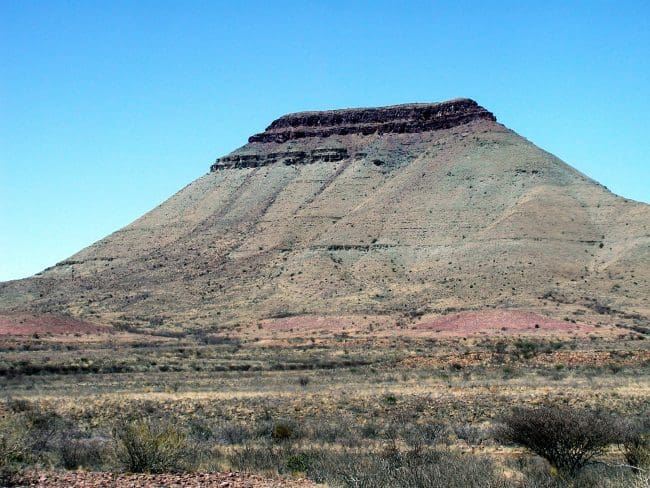 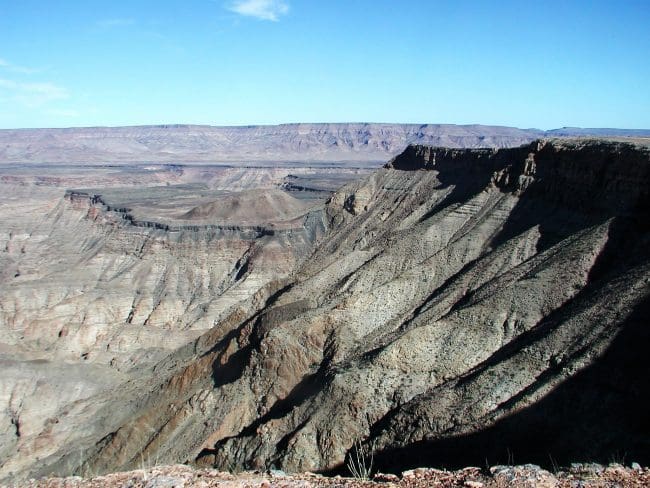 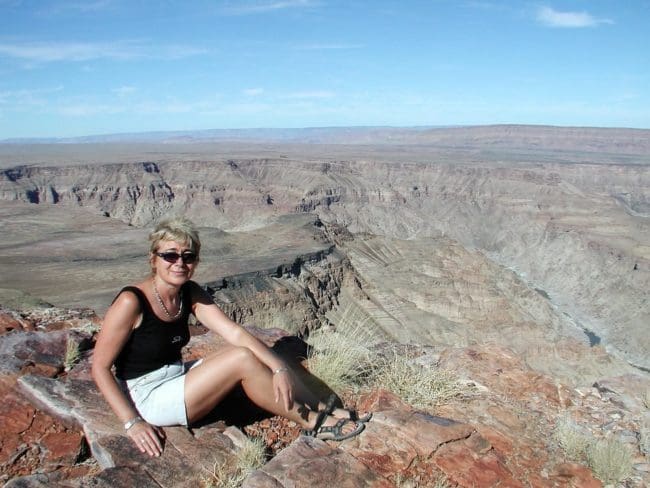 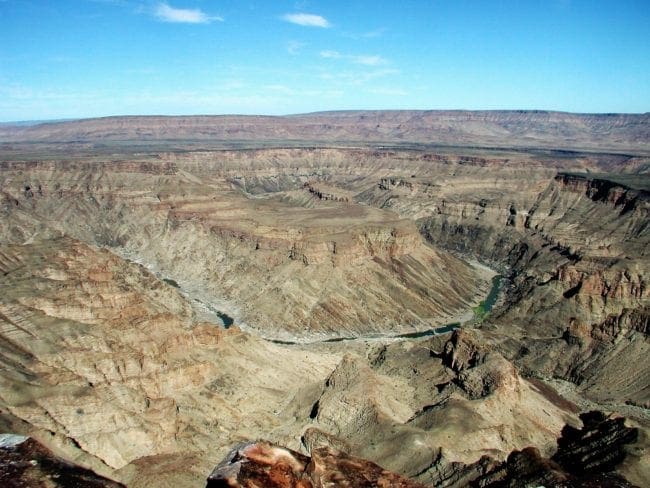 We motor still further south. Over the border, at the Orange River, and into South Africa.