I'm travelling to Jersey, with a friend, also called Sue, just to make life complicated. Our hotel looms over the edge of the Jersey capital, aspiring to chateau style magnificence. It was opened as the Imperial Hotel, but it had to close because its pretension wasn’t appreciated. It went through several more incarnations (Jesuit school, German NCO training college), before re-opening as a hotel. The buildings around are a mish-mash of styles, relatively modern and uninspiring. Suffice it to say that when I looked up architecture in St Helier, the first article that came up was a debate on which was the ugliest building in the town. 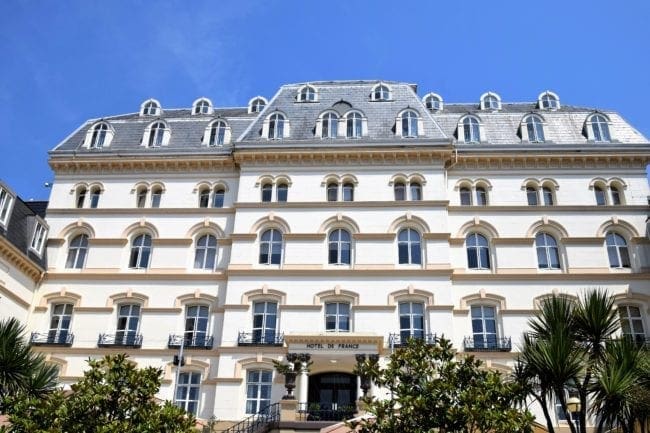 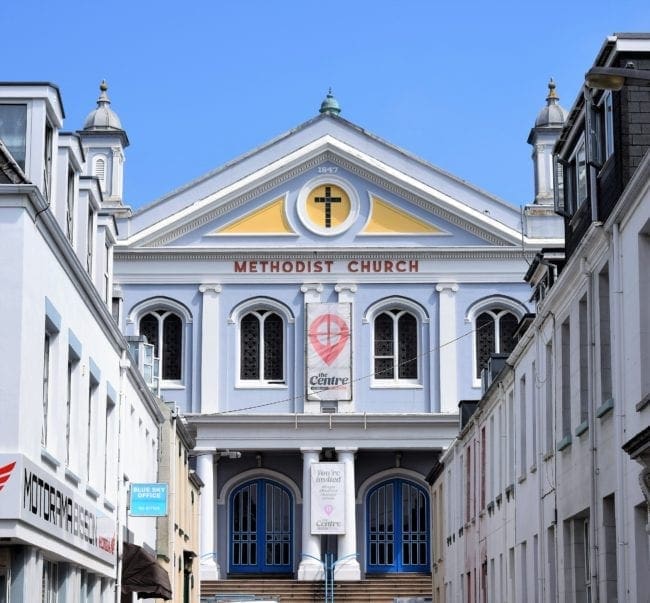 Further into the centre, via a warren of small streets, there are a few more French curlicues, lots of shops (some in a converted warehouse) and a couple of colourful flag bedecked bustling markets. One has a fountain, with some odd plastic mannequins sitting on spouts. The other is crammed with local fish and orange-red seafood. There are various statues – a gilded George II (he gave the inhabitants £300 to restore the harbour) and a stone Britannia. The latter, out of the line of sight on a portico above a tavern, emerged unscathed after the German occupation, her union flag shield proudly intact.

There’s also a Liberation Square, with a flag waving liberation statue, by the marina. Opposite, is a huge bright yellow monstrosity of a building, which cries out for demolition, lying below a small fort attached to a sprawling futuristic dome. This, the crowning glory of St Helier, turns out to be a leisure centre. 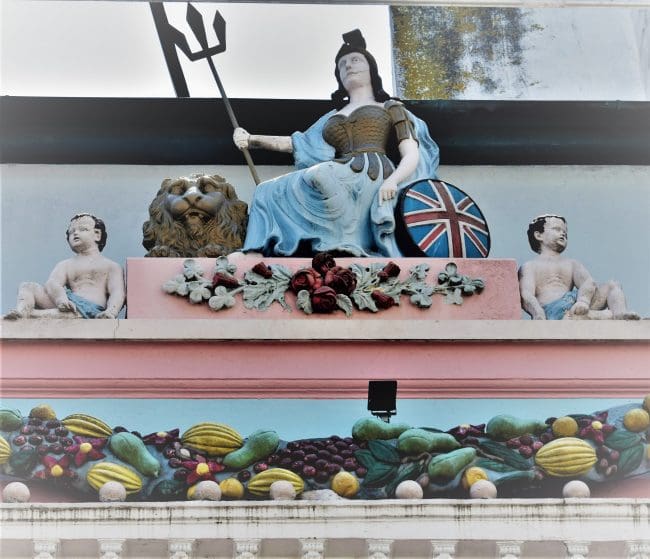 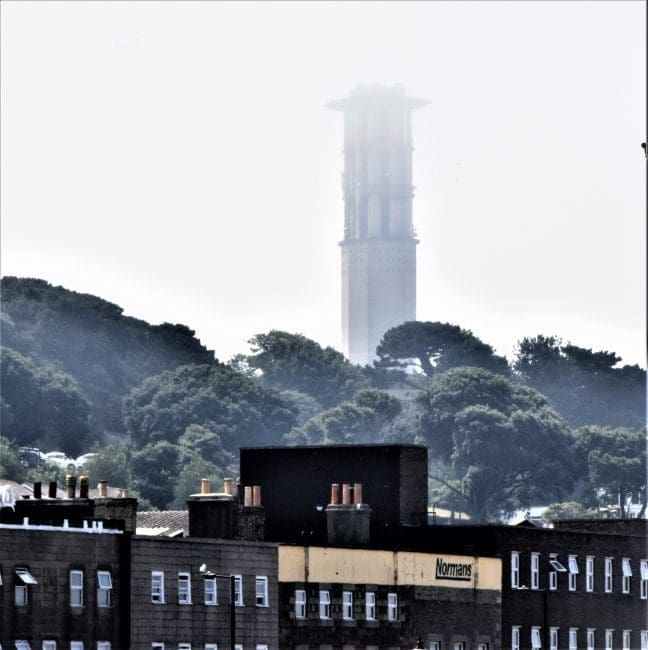 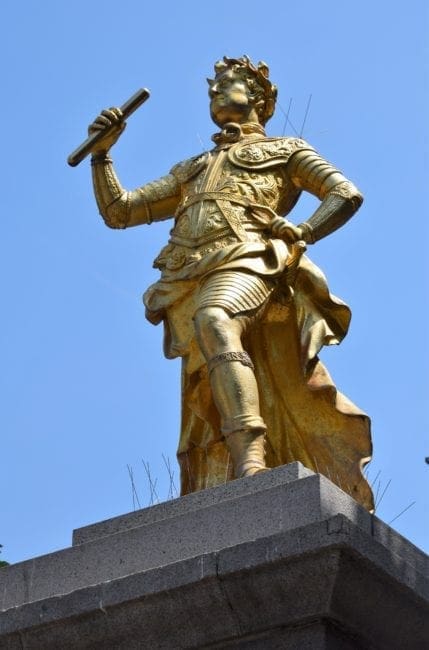 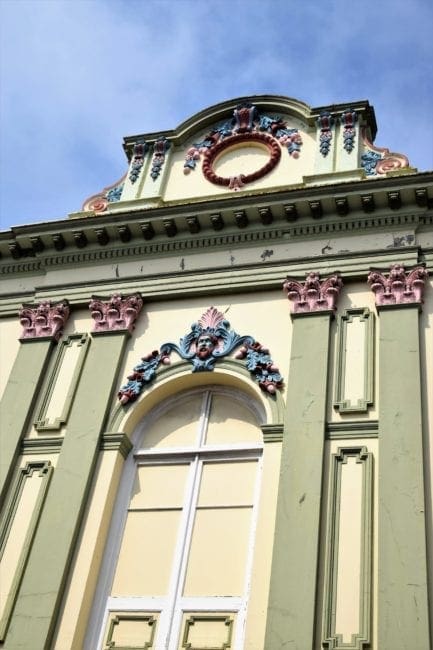 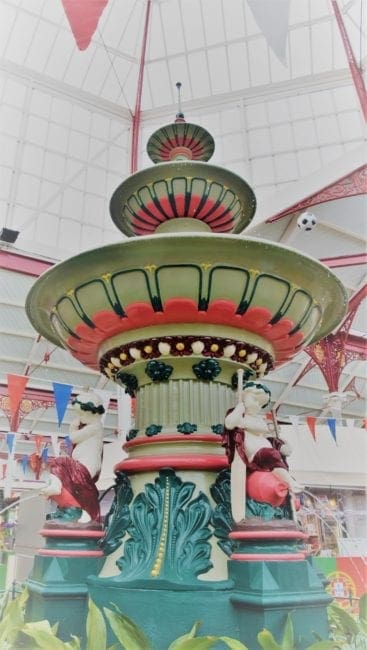 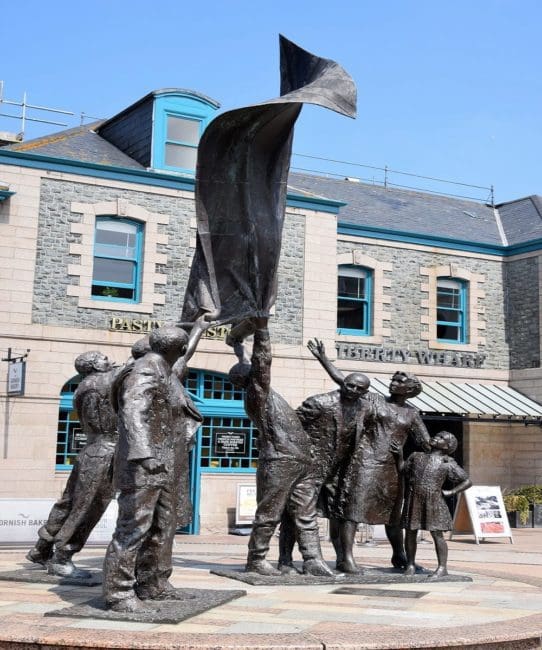 We have a rental car and glorious weather and plan to take the coastal route round Jersey. We also have a map and have highlighted all the scenic wonders suggested by the guide books (and other tourists in the hotel). Though leaving St Helier isn’t that easy. The narrow streets have been organised into a fiendishly incomprehensible one way system. Parking is equally complicated. There are areas requiring scratch cards, parking discs (of several different colours and no instructions as to where to get one from) and various other delineated spots, mostly on precipitous cobbled boat slipways.

Every little bay we pass is invitingly charming, but striking Mont Orgueil Castle on its rocky promontory is our first proper stop. It has turret top views across Gorey Harbour and down the coast and is cunningly arranged with interlinked chambers and ‘secret rooms’. There is no signposting whatsoever. The result is  perpetually lost visitors, who might be tempted to pay the extra pound for a map of the castle that isn’t included in the already pricey entrance fee. 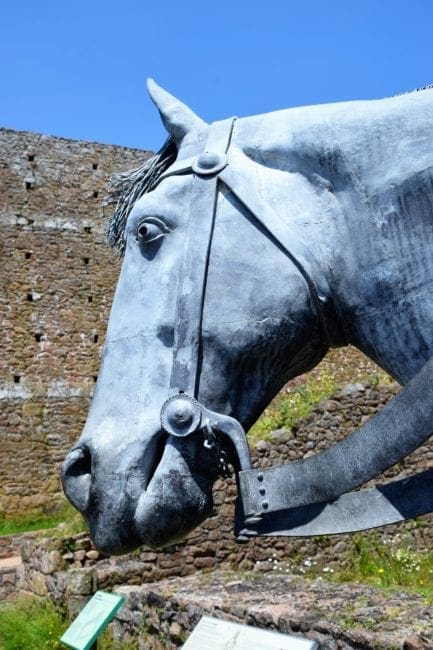 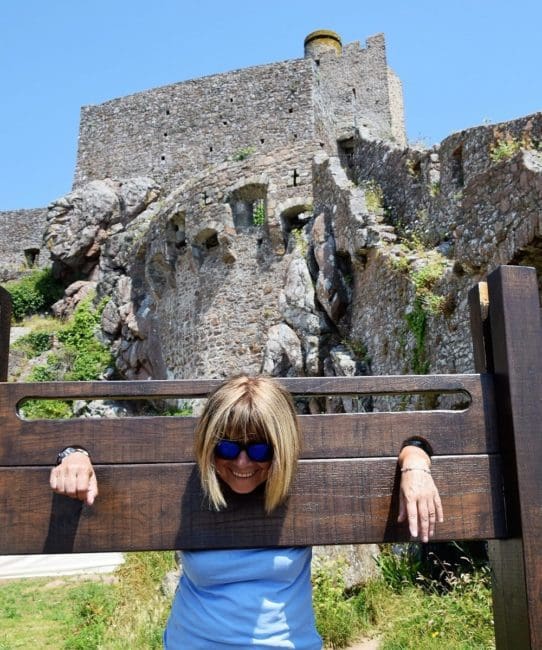 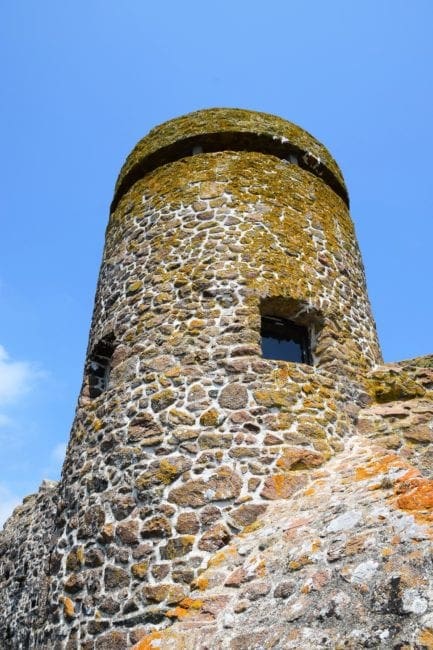 Gorey village is neat and tidy with beds (and boats) packed with bright blooms. Every kiosk offers Jersey ice cream and we succumb here, where we’re handed two heaped and wobbling, cones. My creamy whorl immediately leaps off its cone to land splat on the kerb, much to the delight of the seagulls.

We’re unsure what’s supposed to be exciting about St Catherine’s Breakwater, but we halt dutifully. It has quickly becomes apparent a) that we’re staying in the least attractive part of the island and b)t hat we should ignore all the recommendations we have been made and so, we proceed free-style. Sue’s driving and I’m navigating. This is a full time job, as the main routes run across the island. Dropping into the little coves involves following narrow hedge lined tracks, with little in the way of signposting. It’s a good decision to stick to the coast, which rarely provides less than stunning views, and is replete with maritime heritage. 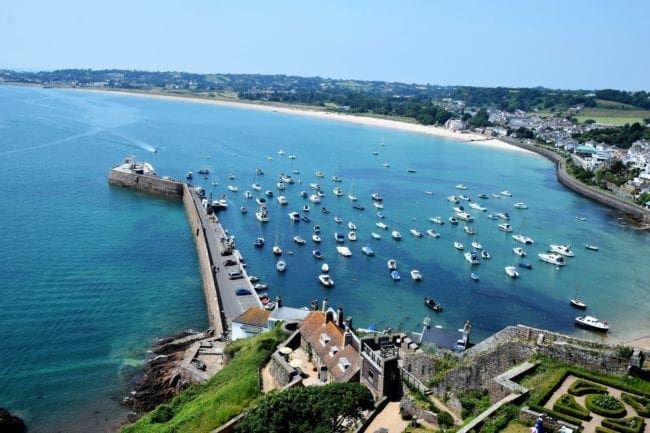 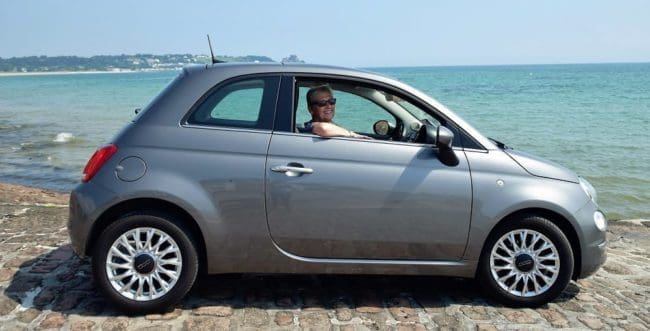 The welcome wider coastal roads on the more open stretches are gorgeously edged with banks of waving blue agapanthus. The scenery becomes increasingly more dramatic as we head north, and anti-clockwise, stopping numerous times, to take photographs. The little fishing villages are delightful, the views from the headlands to picturesque rocks (artistically arranged on sandy beaches and bestrewn across an emerald hued sea), France and the other Channel Islands are wonderful. It’s one long pageant of variously striped and decorated fortifications: castles, forts, towers, Martello towers, artillery batteries and seawalls. 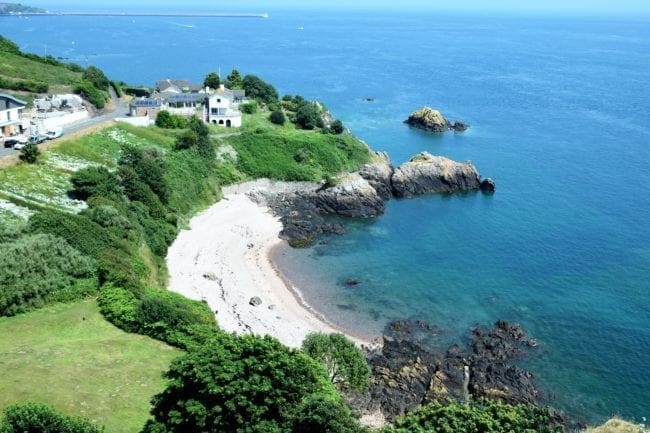 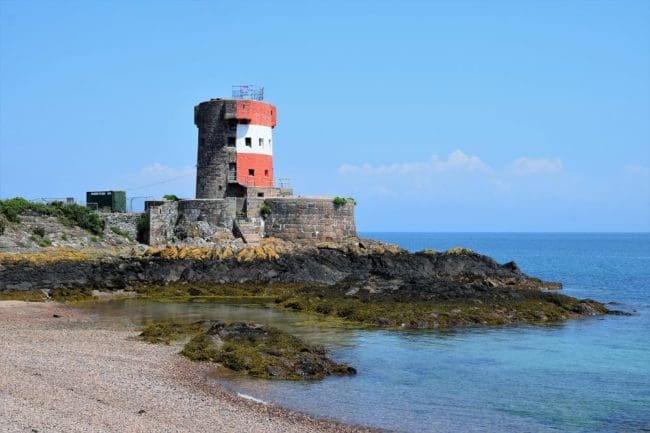 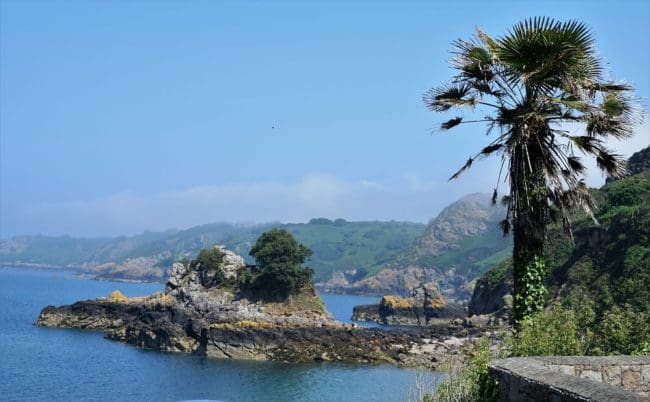 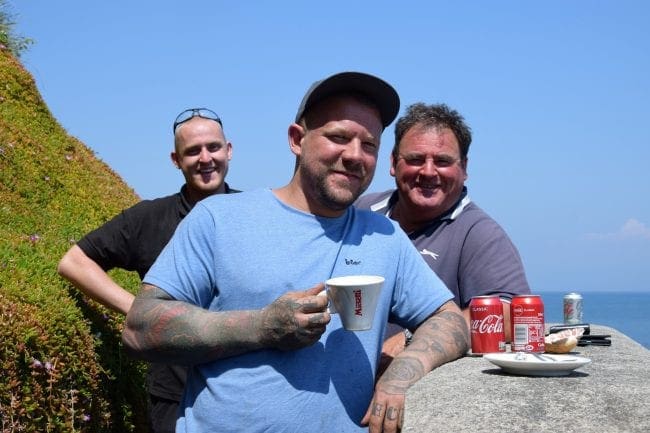 We spend the rest of our first day happily sampling these, round to the Devil’s Hole (the devil himself is lurking in a stagnant green pond at top of the path). Beaming locals offer themselves as subjects between shots of buildings and bays.

Finally, we wend our way south to St Brelade’s Beach for a crab supper. The tide is out and the vast stretch of sand here, framed by more craggy islets, can only be described as awesome.

On Exploration Day Two we venture clockwise. There are several more castles linked to the mainland by causeways, only walkable at low tide. The most remarkable is Elizabeth Castle, just off St Helier. Here they have amphibious ferries, crawling along the sand. 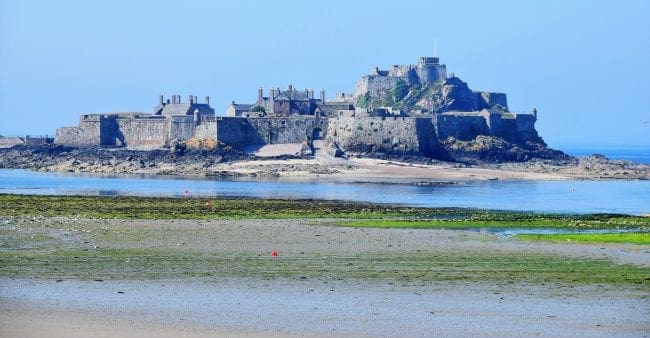 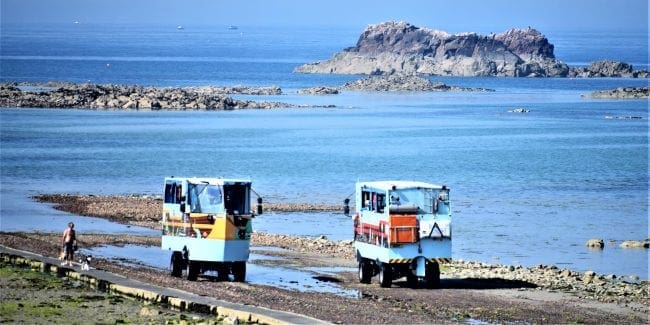 The views on the southwest tip of Jersey are arguably even better than the east coast. ‘West is best’ says our dubiously authoritative guide. The panoramas from the headlands at Noirpoint, Beauport Bay and Corbiere Point are where I begin to run out of superlatives. Noirmont Point overlooks St. Aubin's Bay, Elizabeth Castle, the Martello Tower, Tour de Vinde.and the harbours of Saint Helier. Battery Lothringen here was a World War II coastal artillery battery constructed for the Wehrmacht, during the Occupation of the Channel Islands. ,Most of the concrete structures remain today and they are running tours. 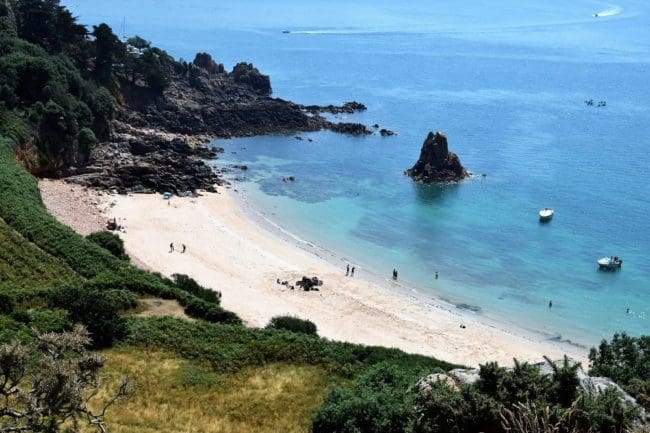 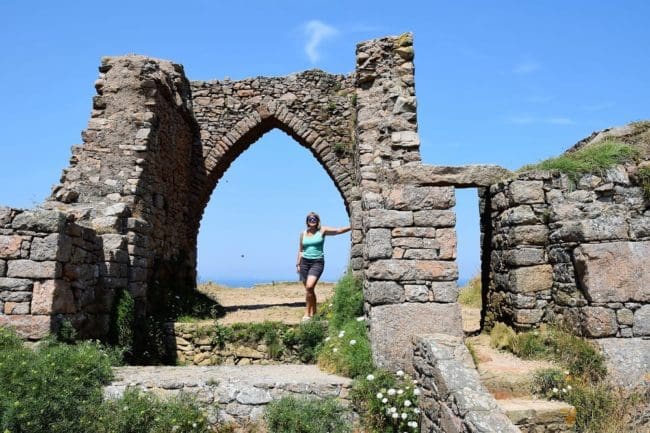 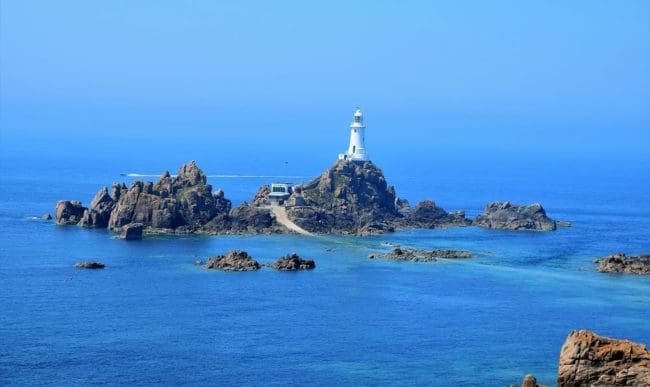 A run up the wild five mile coastal road (sand dunes, surfing waves and vicious currents) for final outlooks across crystal clear water to Guernsey, from the spectacularly ruined Grosnez Castle and Plemont Bay. The latter is a precarious walk behind a waterfall if you don’t mind risking the rock falls and one of the fastest incoming tides in the world).

The interior of Jersey is no more than pleasant (why worry when the coast is so fabulous?) and the narrow roads busy. There’s a lavender farm, with one of the surliest waiters I’ve ever met – we only wanted a bottle of water (maybe he is a pouque?)  The renowned Jersey cows laze on lush pastureland. It’s clearly important, therefore to test the cream tea on a farm, complete with pedigree velvet eyed calves. Delicious. 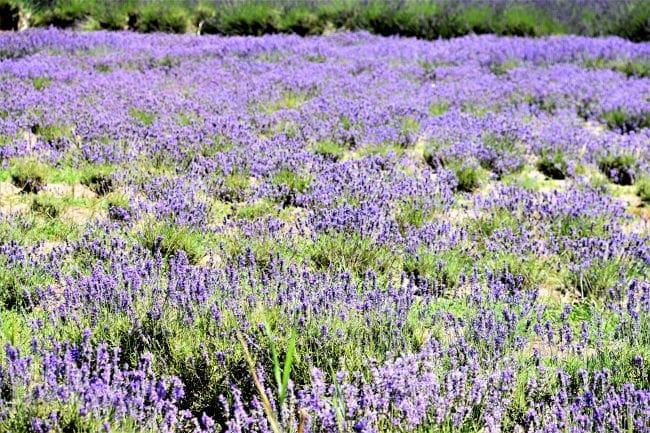 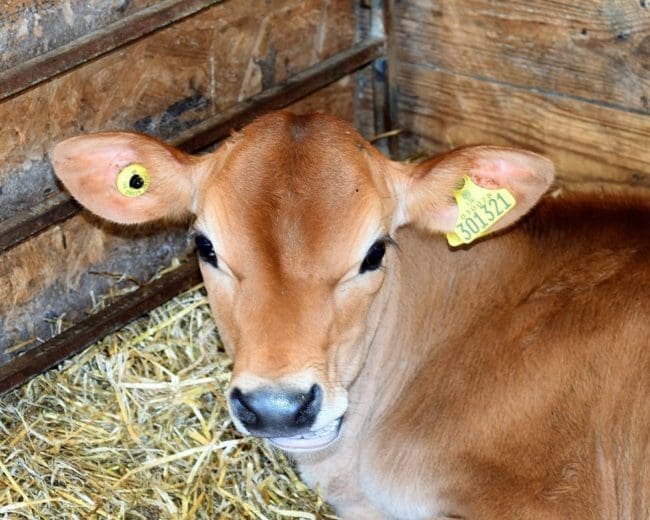 Finally, to St Aubin, another recommendation. It’s pretty enough, with a little harbour that’s lined with bars and restaurants and yet another fort. However, the bars are packed with raucous tourists (England have just won their World Cup football tie). We’re eating at the Old Courthouse Inn, at the very end of the quay. This is where Bergerac used to hang out when he was detecting. However, it’s, sadly, just been taken over by a pub chain and the service is more Basil Fawlty than BBC. The buttery Jersey Royal potatoes (that accompany most menu selections) are the highlight of the meal.

Four days has been sufficient for some very rewarding sightseeing and some welcome sunbed relaxation in the immaculate hotel gardens. The lovely weather has presented the island at its very best and I shall be very sad to leave. Jersey Royal potatoes are on sale in brown paper bags at the airport. I’m not convinced they would make good keepsakes, but the island is a definite possibility for a return visit.