Over the Allenby Bridge through the West Bank from Jordan and into the West Bank of Palestine/ Israel. The wait at immigration isn’t too bad - though the bus is comprehensively vetted. The Arabs taking through their trucks and buses are having a much harder time. Our entry visas are stamped on pieces of paper, to be collected when we return to Jordan. The Jordanians won’t object. They don’t recognise the State of Israel at this time. So we aren’t deemed to have strayed over the border.

Israel is synonymous with the Biblical Holy Land. The earliest known archaeological artefact to mention the word "Israel" is the Egyptian Merneptah Stele (dated to the late 13th century BC). The name Israel (Struggle with God in Hebrew), derives from the Biblical patriarch, Jacob,who successfully wrestled with the angel of the Lord. Jacob's twelve sons became the ancestors of the Israelites, - the Twelve Tribes of Israel. as we all know from the musical, Jacob and his sons had lived in Canaan but were forced by famine to go into Egypt for four generations, lasting 430 years. Moses, a descendant of Jacob, eventually led the Israelites back into Canaan during the "Exodus". 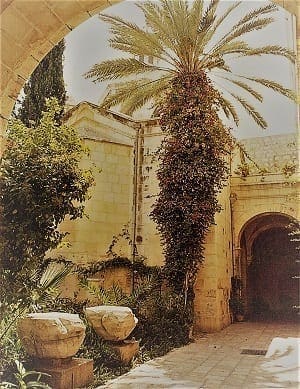 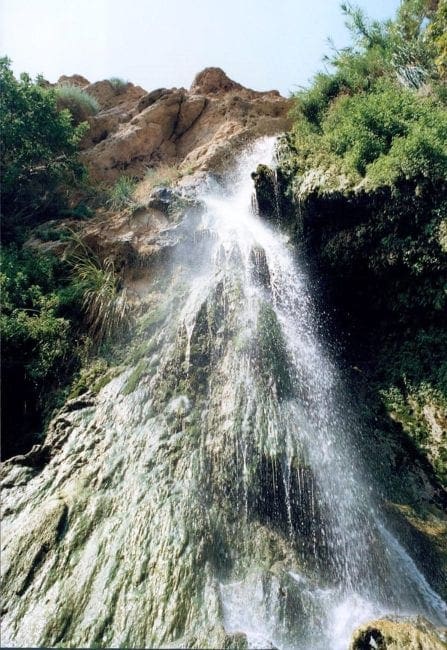 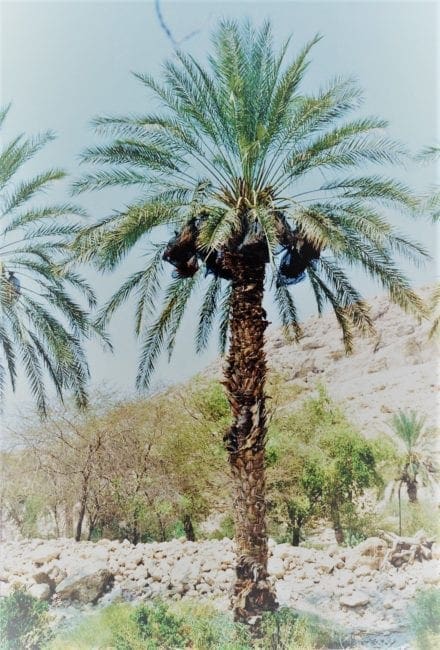 It's thought that the kingdom of Israel centred around the capital Samaria, with Judah to the south. The Israeli people were subject to invasions by different empires - the Bible tells this story much better than me. Assyrians, Babylonians (many of the Jews were forced to remove to Babylon at this time), Persians, Romans, Byzantines, Arabs, Ottomans. Over the centuries many of the Jewish inhabitants fled abroad to escape oppression, slavery and then Christian and Islamic rule.

Geo politics of the new Israeli state that emerged post World Wars, after the Ottomans were expelled (1948), are contentious and not easy to explain. There is ongoing conflict. Please read up for yourself. My understanding is, that according to international law Israel currently occupies land on the West Bank, East Jerusalem and other areas, that legally belongs to Arab nations, Palestine in particular. So I have written about those areas in a separate post, under the heading Palestine. 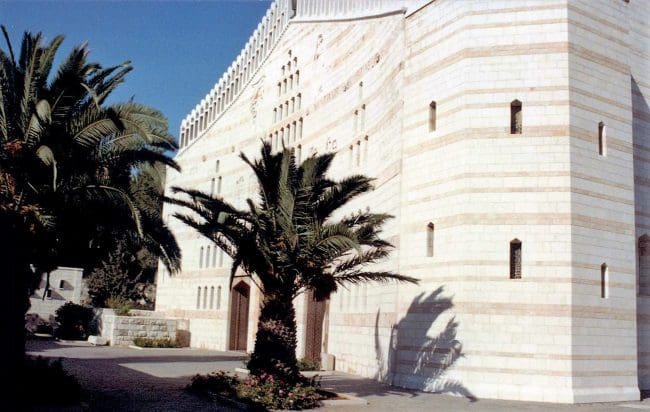 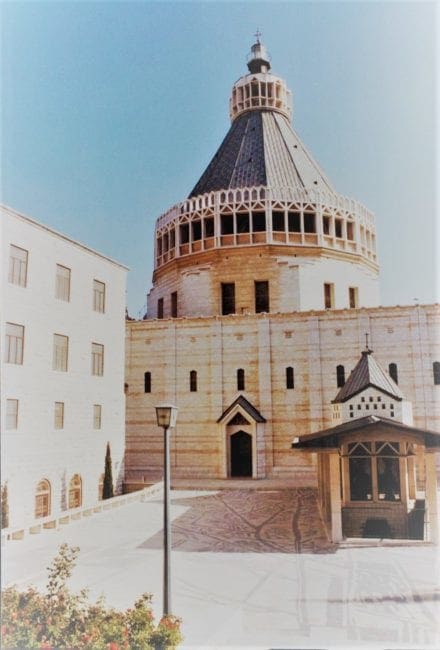 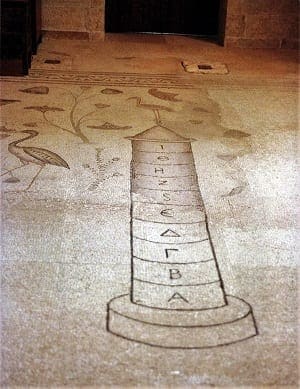 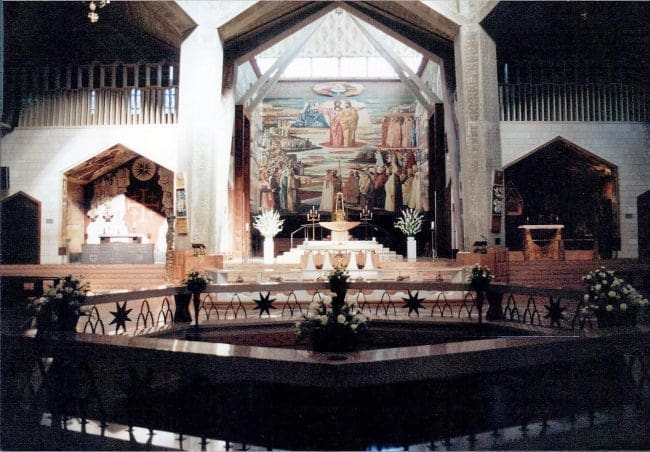 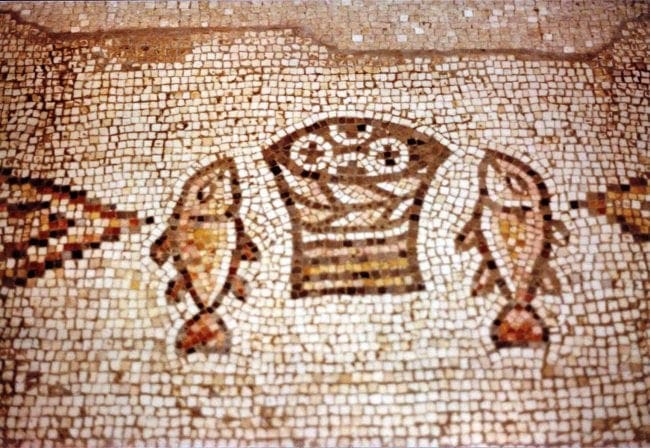 North to Nazareth, huge and bustling. I'm thinking it's very different to the scenes in the Bible, where it is described as the home of Mary and Joseph. In the old city, the turreted Basilica of the Annunciation is, some believe, where the angel Gabriel told Mary she would bear a child. St. Joseph’s Church is said to be the site of Joseph’s carpentry workshop. The underground Synagogue Church is reputedly where Jesus studied and prayed.

Next, Lake Galilee (very little fishing going on today),the scene of miracles, such as the Wedding at Cana, and the Feeding of the Five Thousand with the loaves and the fishes. It's also the spot where Jesus delivered the Sermon on the Mount (before he fed the attendees). The loaves and fishes are represented in one of the mosaics in the church at Tabgha, as this area is where the miracle is said to have taken place. 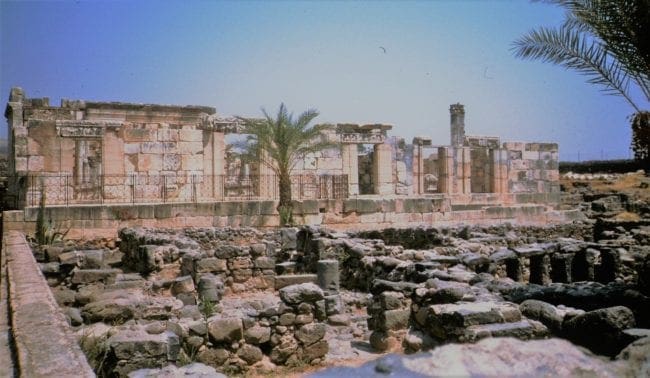 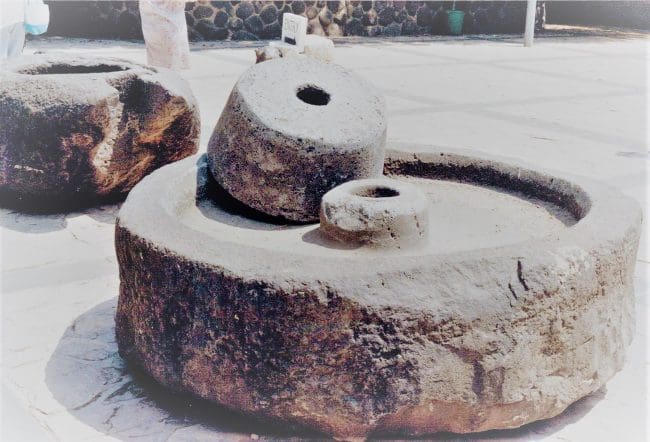 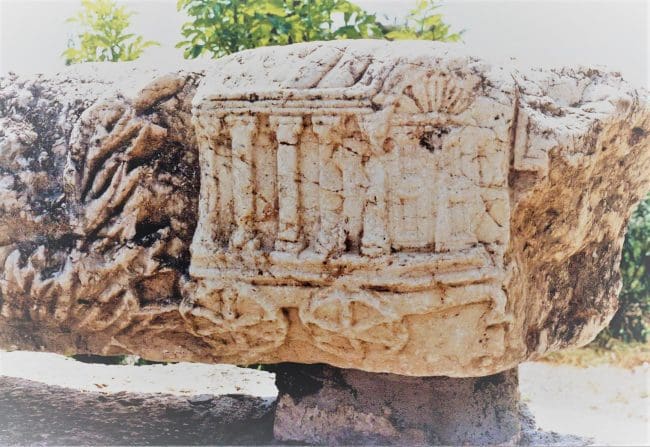 In New Testament times, Capernaum was a fishing village located on the northern shore of the Sea of Galilee. Archaeological excavations have revealed two ancient synagogues built one over the other. They're amongst the oldest synagogues in the world. A house turned into a church by the Byzantines is also believed to have been the home of Saint Peter. 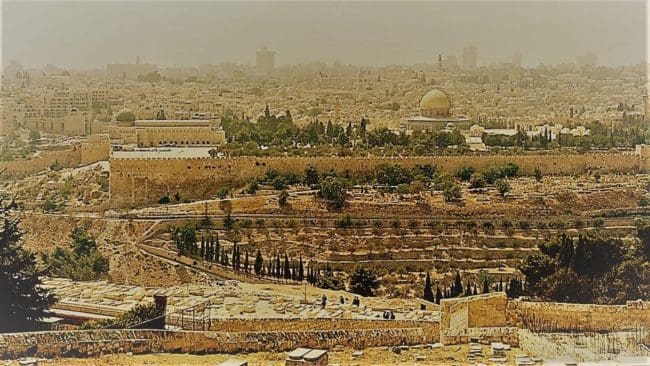 South to Jerusalem, one of the oldest cities in the world and, considered to be a holy city for the three major Abrahamic religions: Judaism, Christianity, and Islam. Both Palestine and Israel claim it as their capital, and it is currently the seat of government for Israel. Most of the major world powers have failed to recognise either claim, as the dispute between Palestine and Israel is ongoing and long running. East Jerusalem (mainly the Old City) and the Bethlehem city area are designated legally as belonging to Palestine. So,read about those visits here. Jerusalem is exceptionally quiet. Most of the stall holders are on strike, so the souks are empty, the shops all shuttered.

From Palestine, south into the Israeli Desert. Ein Gedi, (spring of the kid), is an oasis, an archaeological site and a nature reserve, to the west of the Dead Sea. It's a relaxing place to stop, admire the data palms and the sprinkle of water in the falls.

Onto the isolated hilltop fortress city of Masada. Herod the Great (many mentions in the Bible) captured the area and built his palace on the table like top (400 metre drop in one direction 90 metres in the other), in anticipation of further revolts. It sprawls over three rock terraces. There's a Roman-style bathhouse with mosaic floors and it is notoriously difficult to access.

Here, we are persuaded that this is one of those views that is best experienced at sunrise. So we are  forced to arise at 3 a.m. to trek up countless steps and slippery paths and  appreciate the sunrise over the Dead Sea.

To be fair, it’s a worthwhile enterprise, if a starkly brown vista. It brings home the sadness and courage of the splinter group, the Sicarii, who made their last stand against the Romans, here in AD70. They committed mass suicide, rather than surrender, setting most of the buildings ablaze. (960 men, women, and children in total only two women and five children were found alive. 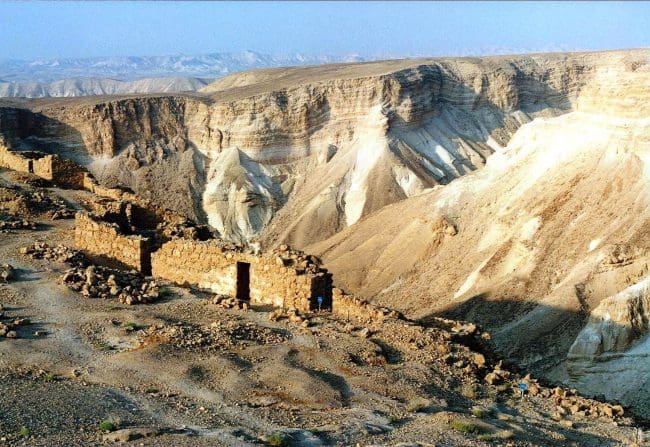 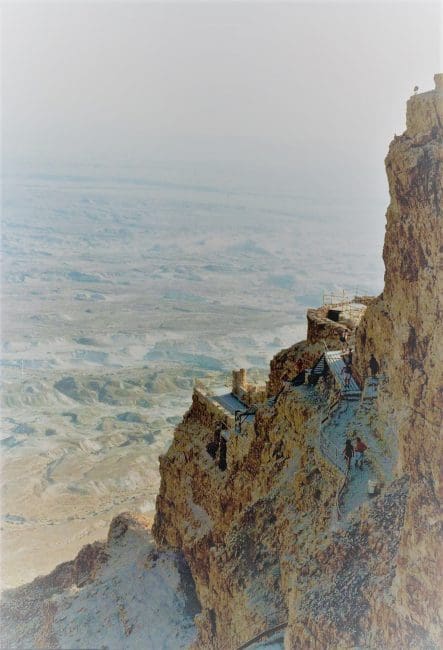 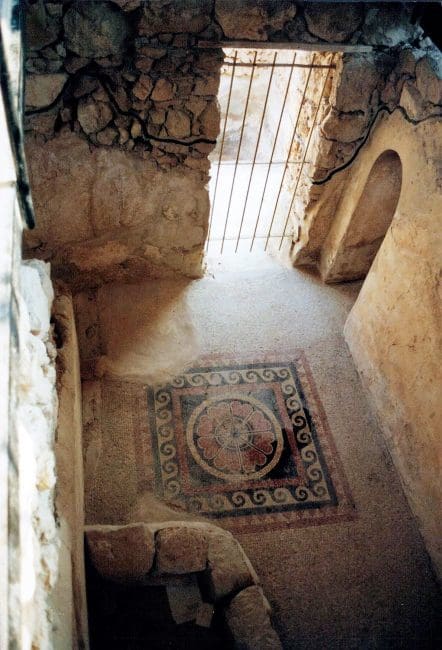 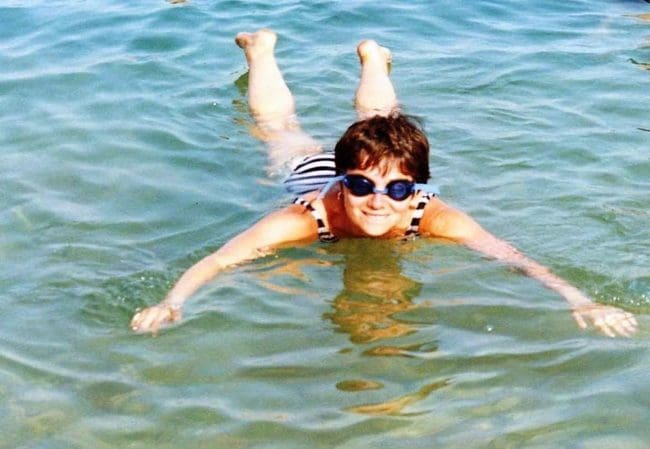 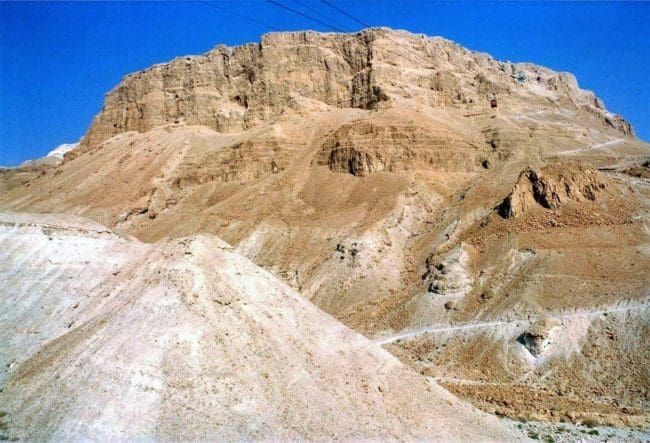 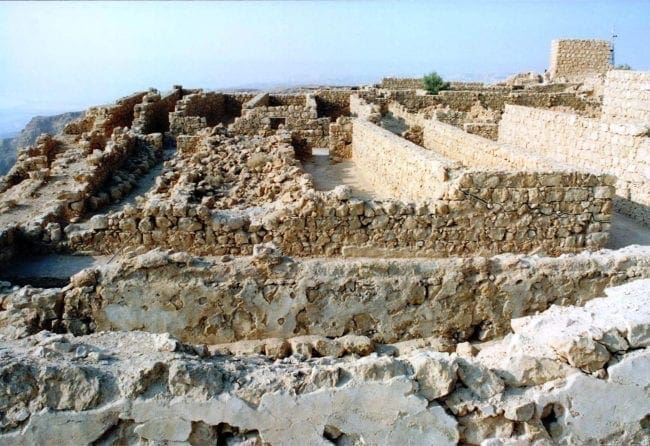 We are rewarded  an hour to recuperate after our exertions, by bobbing  in the Dead Sea. It’s so saline that your arms and legs stick upwards and it's almost impossible to swim properly.  (I think there’s a cable car at Masada now.)

The story of the remainder of this journey is to be found under Jordan.