Flying in from South Korea, I seem to be on a sort of ANZAC tour of Uzbekistan and The Silk Road. Three couples, one from Australia, one from New Zealand, one from Canada. (Well the acronym still works.) And me. The spare part. One of the Kiwis is also called Sue, so it has been ordained that I will be known as Susie for the duration of the trip. The guide is called Surat and he's a bewildered little man from Tashkent.

Breakfast - I consume rice pudding, cauliflower cheese and a peach. 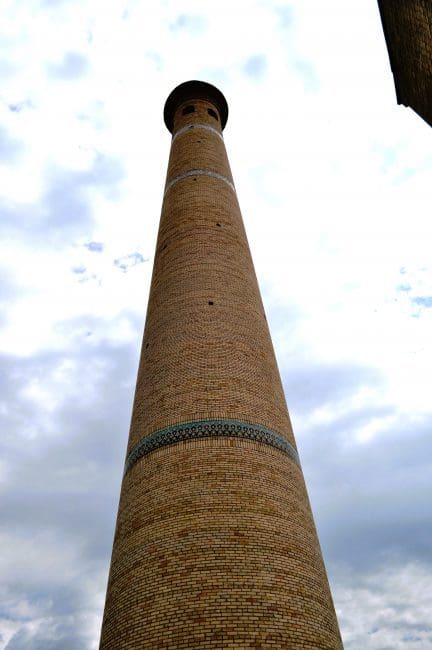 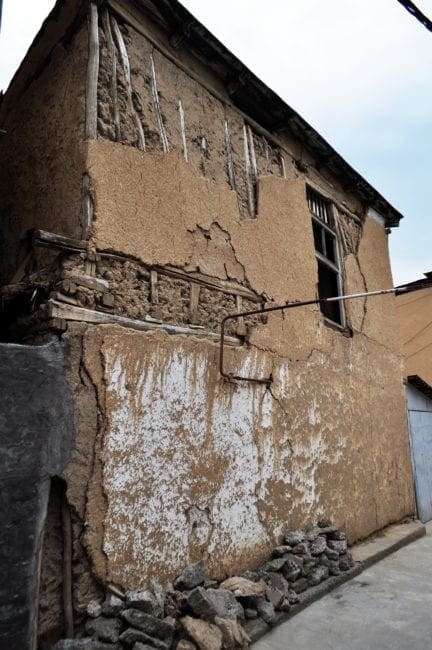 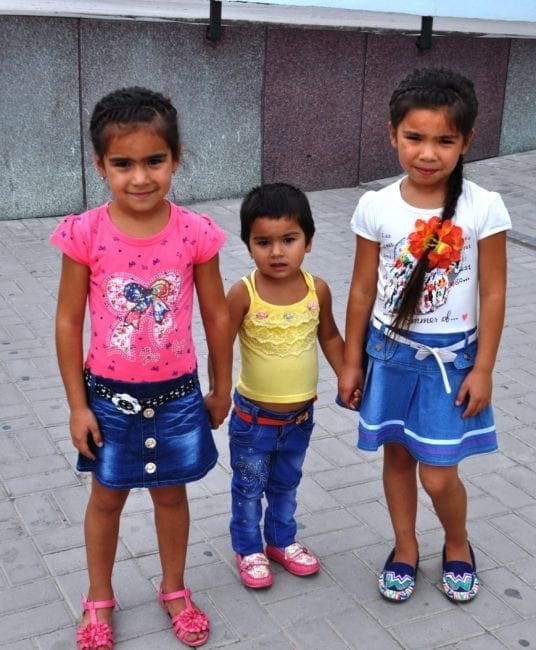 Tashkent, the capital of Uzbekistan, was one of the major trading centres along the Silk Road, and remains one of the largest exporters of cotton, silk and textiles to Eastern Europe. It is a pleasant city with several green parks and a very modern centre. Very little that seems to predate 1970. and there are new mosques. There was an earthquake in 1966 and there's the usual ex Soviet state reconstruction.

The people of Tashkent are friendly, but also seem to regard us with a great deal of curiosity. They all stare unashamedly, especially the young men, and several groups want to include me in their photos. Blonde, curly hair is a real novelty. The women mostly wear headscarves (not hijabs) and longish floral floaty dresses. The men wear jeans and T shirts. Like the women, they are dark haired and olive skinned and tend towards thick set and squat in build. It's Eidh at the moment and many have their holiday/visit-the-city gear on. It also means that most of the bazaar and all the museums are shut. 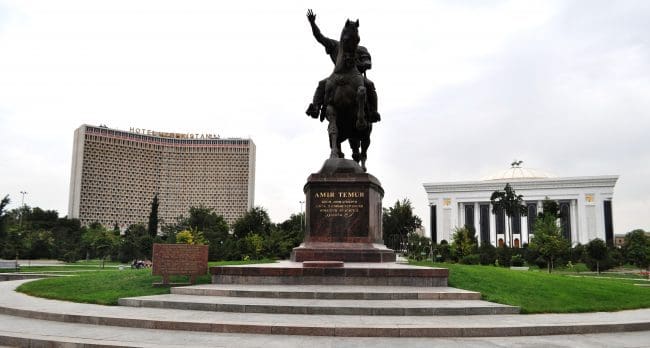 Although Tashkent is his home town, Surat seems to be at the peak of his indecisiveness. He looks to be improvising wildly and strangely at a loss when it comes to navigation. In the end, we accomplish a tour of the old town - brown crumbling houses. The Teleshayakh Mosque complex has the main Friday mosque (with huge minarets). the Barak Khan Madrassah ( no longer used) and several handicraft outlets. There is also the mausoleum of Abu Bakr Mohammed Kaffal Shashi. But the main attraction is the eighth century Quran - apparently the oldest Quran is existence.

In central Tashkent, is Amir Temur Square - we are now moving into Soviet and relatively modern Tashkent. The statue here commemorates one of Uzbekistan's great leaders. Amir Temur's empire spanned Central Asia, Iran, the Caucasus and parts of the middle east. The square is surrounded by wonderfully grandiose Soviet style buildings. It's a pleasant walk along Mustaqillik Maydoni, through parklands, formal gardens and by fountains, past the presidential palace, other government buildings and the Alisher Nava'i Theatre (closed for refurbishment) to Independence Square, with its huge golden globe monument. 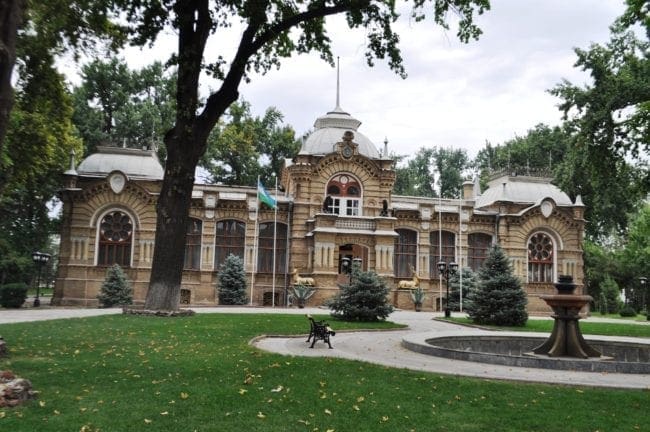 On the way, is a palace, with a colourful history. It was built for a Romanov prince who was exiled for having an affair with an American and stealing several diamonds to fund it. Grand Prince Nikolay Konstantinovich Romanov was a first cousin of Tsar Nikolay II, It's unclear if he died, in 1917, of pneumonia or Bolshevik bullets.

Then, a trip on the metro, to see the stations (ornate like Moscow but no photos allowed). And a bus trip out to the park containing the Memorial to the Victims of Repression in Tashkent (for the thousands of Uzbeks massacred by Stalin), next to the Tashkent TV Tower. It also contains a domed museum (see above). There is a very large police presence, especially on the Metro. I suppose that's reassuring.

Lunch is a point-at-what-you-want-self-service café. Surat doesn't seem to be able to recommend dishes or know what anything is. All very odd. ( I would say that perhaps he is taking after his namesake and going dotty, but that would be a terrible joke.) 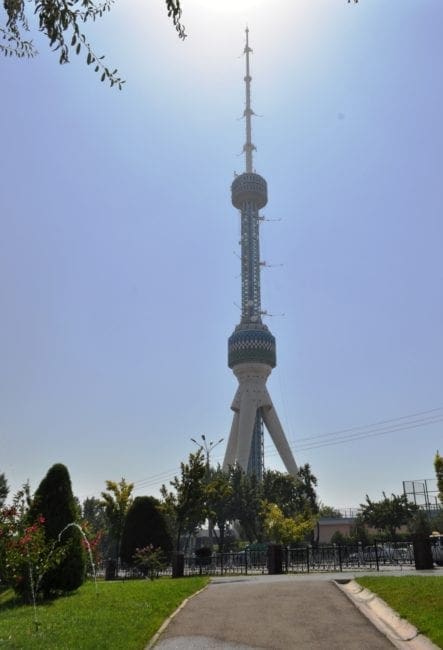 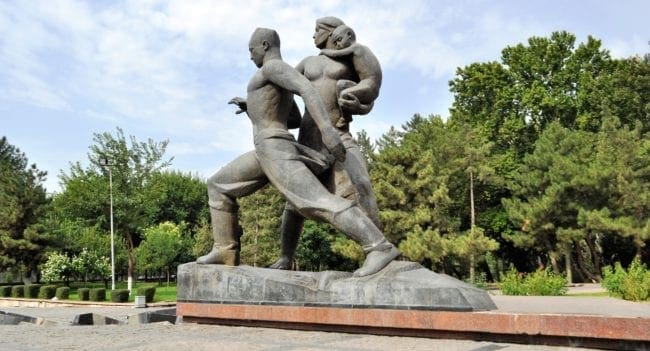 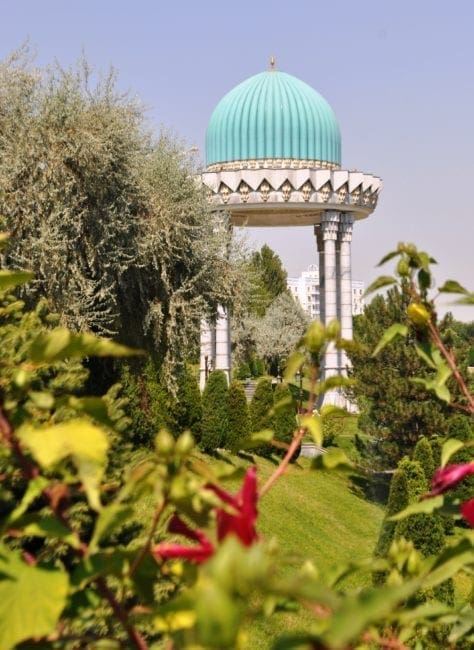 A last quick excursion to Chorsu Bazaar, the granddaddy of them all. A huge and frenetic sprawling old style bazaar in domed and tiered new style surroundings. If you want it they've got it. The most interesting and photogenic stalls are the bakeries. The loaves (are they still called loaves? ) are disc shaped, decorated large trays propped in various displays. 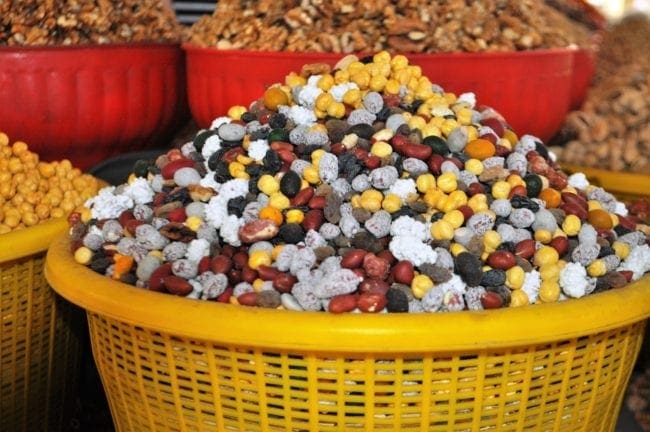 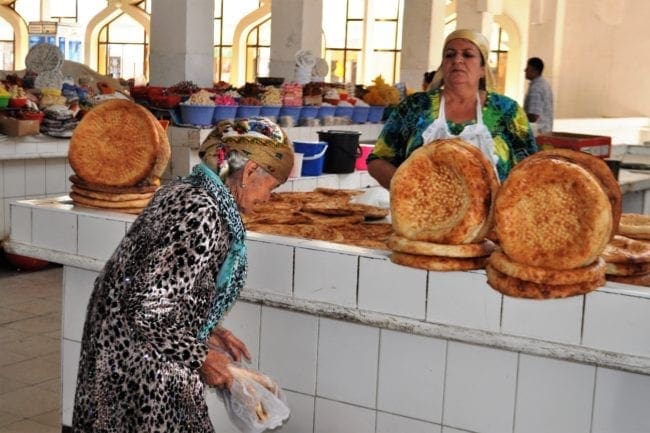 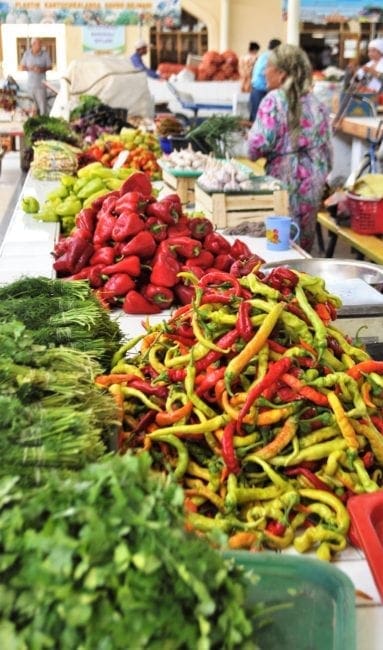 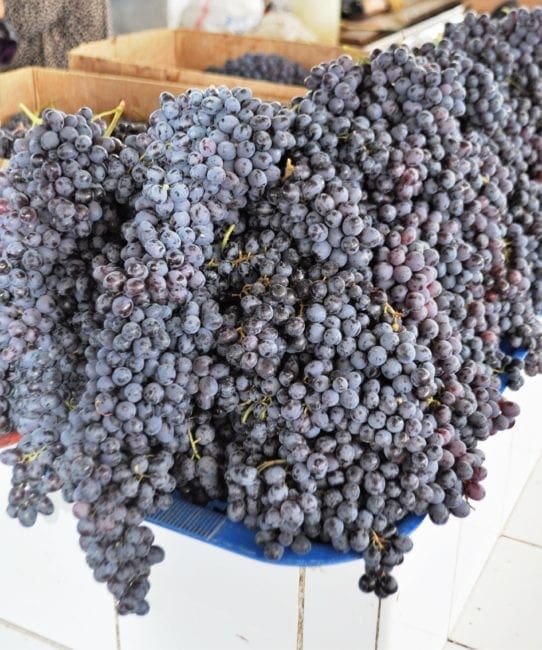 The View From the Tashkent Hotel Window

Our hotel in Tashkent(ostensibly three star) is very basic and everywhere reeks of cigarette smoke. There's a sign on my bedroom window that says 'No Photography'. It might have something to do with all the satellite dishes on the tall cuboid building opposite.

It's not been a great couple of days for me. My lens cap has jammed on my main, wonderful NIKKOR camera lens and no-one, not one of these muscly men, can get it to budge. I've got blisters all over my fingers, where I've tried to unscrew it. And of course all the shops in Tashkent are shut. Tomorrow we are off into remote areas. I've lost the key to the safe deposit box in my room. My passport and my wodges of thousands of sum notes are in there (4000 sum to the pound). And something has bitten my foot. It's swollen and I can't walk very far.

The Silk Road - on the Road to the Fergana Valley, Uzbekistan 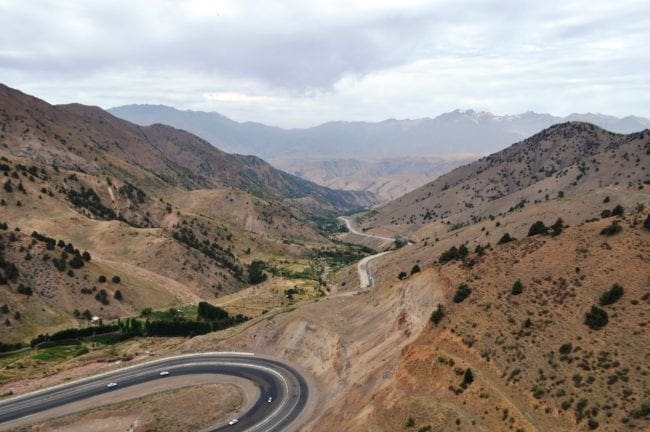 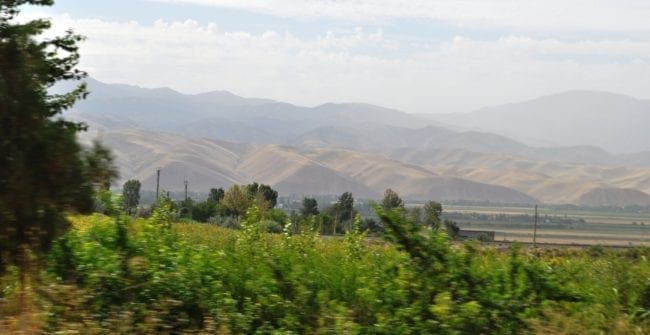 We take three smallish cars into the Fergana Valley. We are following the main Silk Road route between Samarkand and Kashgar in China. The three cars drive strictly in convoy, speeding along the highway weaving in and out of the other traffic, too close together. It's a little traumatic squashed in the front. My brake doesn't work. It was like lucky dip - which couple do I get in with? Today I'm Canadian. None of the drivers speak English and Surat isn't with us, as only foreigners are allowed through the land border into Kyrgyzstan. Mini vans aren't allowed over the mountains either, hence the Italian Job style operation. There are umpteen army posts with men toting very large guns and passport checkpoints before we get anywhere near the border. Photos are banned in numerous areas. It's all very KGB.

There don't seem to be any actual taxis here - Surat says that every car in Uzbekistan is a taxi. Most of the cars are white Chevrolets. White because they are cooler and Chevrolets because there is a big manufacturing plant here. We're speeding so fast that the scenery is a blur. This despite the fake police cars along the verges supposed to deter bad drivers. At one point I spot a herd of goats with a driver on a donkey in the opposite fast lane. We cross the Chaktal Mountains with the mandatory ex communist bloc smoke belching factory or row of marching pylons marring every potentially beautiful spot. There are head-scarved women selling melons and wheels of bread from roadside booths, interspersed with clunky unsympathetic restaurants and filling stations. It's a curious mix of Soviet and the orient.

The Fergana Valley is a lyrical land of fruit and honey. The valley is very flat, and supplies a large proportion of the world's cotton, though we can see snow tipped mountains in the distance, across the fields of white bolls.

En route, we stop at one of the oldest cities of Uzbekistan, Kokand. It is at the crossroads of the two main ancient trade routes into the Fergana Valley,

We visit a khan's reconstructed palace, a mausoleum and two more reconstructed mosques, one of which is now a museum. I'm becoming very familiar with mosaic tiling and turquoise blue domes. Though it's interesting to know that this is where the Mogul Empire originated. The Palace of Khudayar Khan was built between 1863 and 1874. He commissioned 113 rooms, set around seven courtyards. Khudayar Khan wanted his mother to live in one of the palace's grand buildings, but she refused and set up her yurt in a courtyard.

Only 19 rooms remain, partially restored after the Soviets ransacked the palace and we are allowed to visit these. The workmanship and colours - a combination of Russian and traditional Uzbek styles are exquisite. 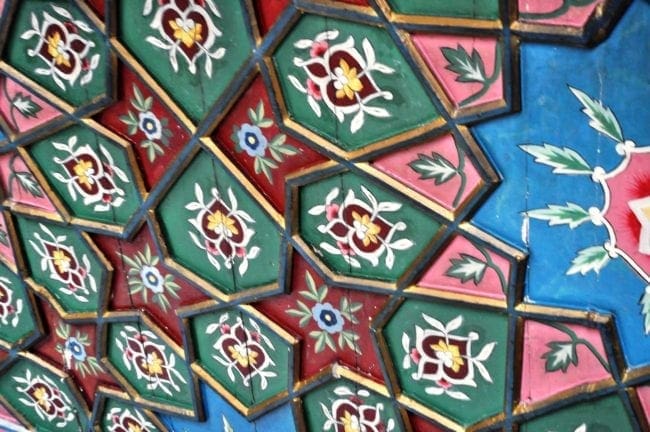 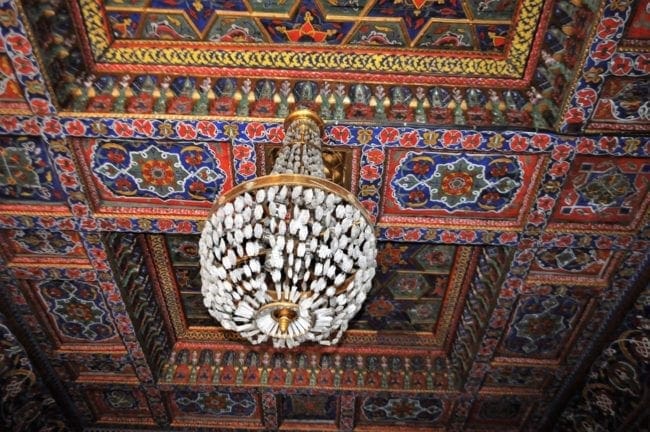 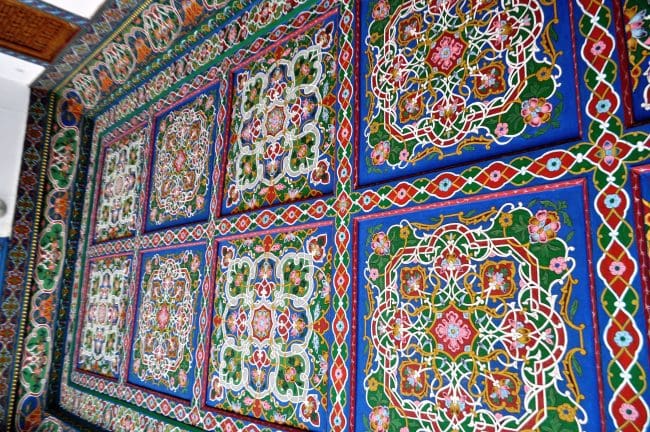 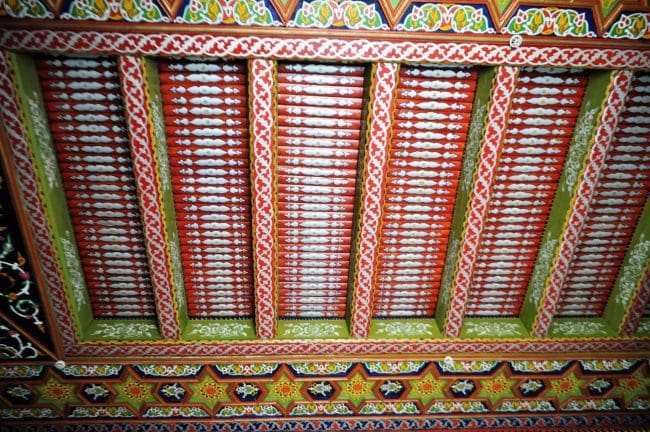 Kokand's Juma Mosque (Friday Mosque) dates back to 1809 and has a 22 metre minaret. It now houses a small museum with displays of embroideries and ceramics.

The Madarikhan Mausoleum is the grave of the mother of Umarkhan, the ruler of Kokand. After her death, the famous Uzbek poetess Nadira, the wife of the late ruler of Kokand, decreed that a beautiful mausoleum be built over the grave of her mother-in-law. Most of the 19th century structure has disappeared, leaving only the entrance pavilion and a cemetery. 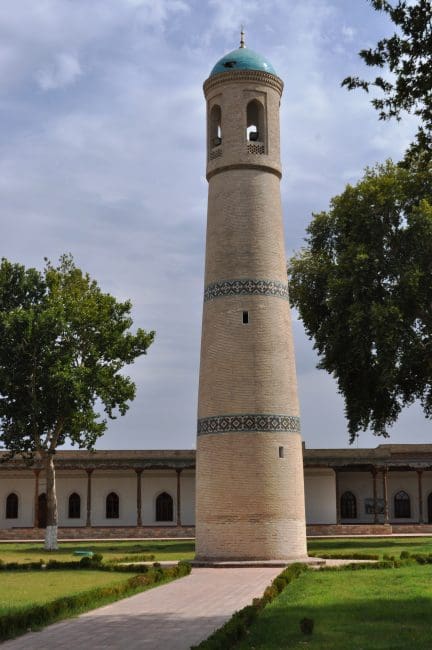 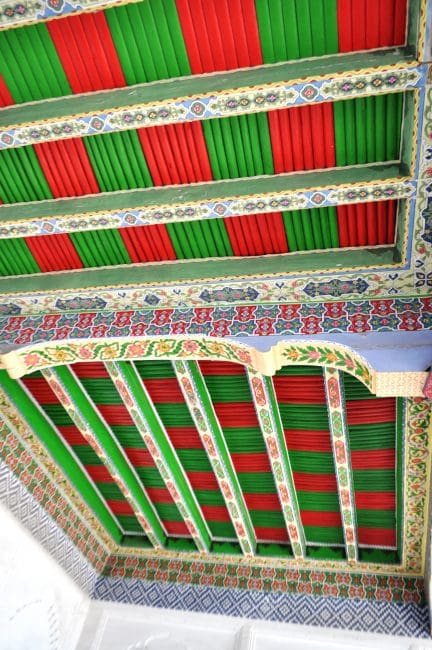 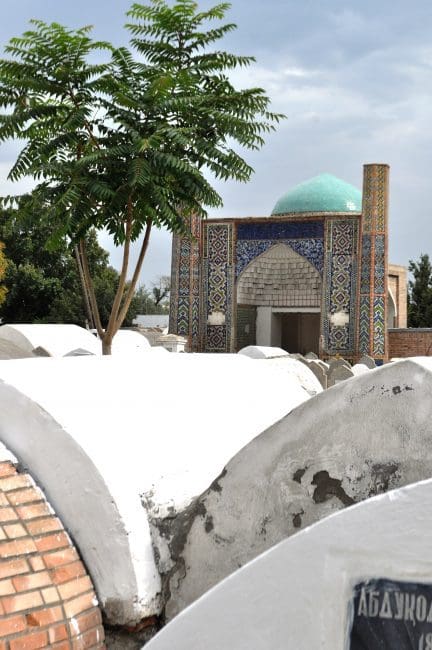 The Potters Town of Rishton

Rishton, the next stop is the go to Uzbek ceramics area. It sits on a fine quality reddish-yellow clay deposit 1-1.5 meters deep. The potters are also able to extracted various dyes, quartz sand, and fire clay from the surrounding mountains. They specialize in "ishkor" blue glaze made from ntural pigments and mountain ash plants.

Today's hotel room smells strongly of drains rather than tobacco. There's a sign in my room that tells me I will be fined if I use the towels to clean my shoes. In the restaurant I have to gear myself up to navigate the menu. These are typically long with odd sprinklings of excruciatingly unhelpful English. Top billing tonight goes to 'sloppy veal'. I thought beef stroganoff might be safe, but it comes with tomato, onion and fries instead of the rice I ordered. The next door table gets that and no fries. The food is pretty bad everywhere we've eaten so far; mostly meat in different stews and really heavily salted. I cant complain about the bill though - just over two quid.

And things are getting better. One of the drivers has managed to get the cap off my camera lens, a screwdriver was involved. 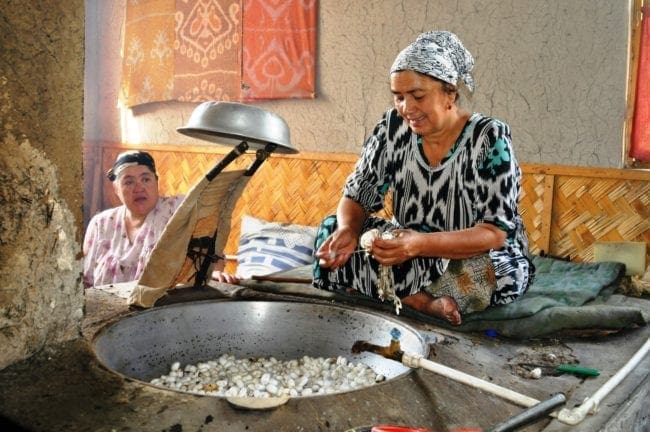 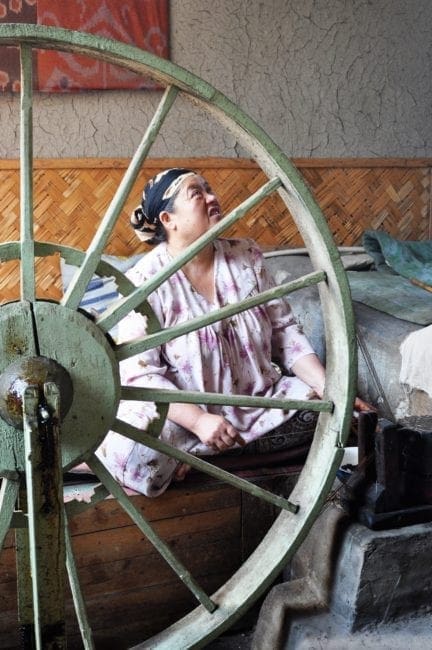 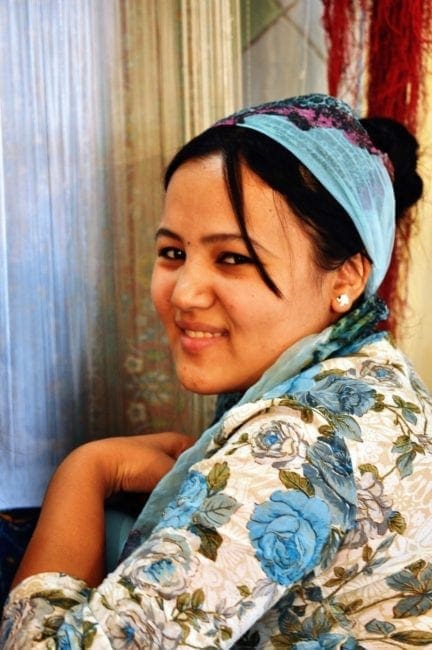 It's not easy getting ready in the morning when you have to hold your breath every time you go into the bathroom. Every action takes careful advance planning. Today, we have a minibus. All the drivers are very law abiding. There are 2D police cars along the road reminding them to behave.

As we are travelling The Silk Road a visit to a silk factory is obligatory. This one is at Margilan. perhaps the most important silk centre on the route. According to European legend, Margilan was founded by Alexander the Great. This is a very traditional factory and the silkworm cocoons are boiled in vats over wood fuelled fires. The peoples' attire is very traditional too - they don't get many tourists. The local bazaar with its seductive sights, sounds and aromas is also worth the visit. Then, onward through the valley to Kyrgyzstan and Osh.