From Delphi to Milos via Athens. I’ve heard rumours that the ferry crossings can be rough and unpredictable. The coastguard decides if sailing conditions are safe enough and they make rulings every six hours, so services are often disrupted at short notice. I’m on a hydrofoil and I'm told that these are faster, but more vulnerable to wind and waves, so more likely to be cancelled. They're virtually all enclosed too, so its not quite the tranquil sun-drenched journey I had fondly imagined. I'm not sure I'm looking forward to it at all now.

Another grumble is the time of departure – seven in the morning. And I have to get up and drive to the port to arrive just under an hour before the ship actually departs. There’s another ship at eight and I have lobbied to change to that one, but have been ‘strongly advised’ not to. It’s a smaller vessel, more vulnerable to bad weather and cancellation in this time of Covid, when there are far fewer tourists I’m told.

There’s a hardly a lurch, however, as we make our way down the Saronic Gulf - Piraeus (the largest passenger port in Europe and the second largest in the world) still shadowy and lamp lit, the island of Aegina a short while later, a dark hump on the horizon. Later, Serifos and Sifnos, white dice houses spilling up hills, with a domed church atop in each port. Serifos is on the government quarantine list at the moment, but no-one here is sure why. And I’m not sure if a ten minute stop counts as a transit. I'm not going to ask.

Milos is another postcard perfect island. Adamas, the main port and largest town sits below Plaka, the capital, which is the go-to-place for sunset. Every building on the island is a whitewashed cuboid, mostly with cerulean blue shutters and doors. A few rebels have painted their window frames grey or a paler blue. I’m staying in Pollonia, which was a fishing village, and is now a new tourist town, the apartments lining the bay still all in the same boxy style. It’s the only settlement with direct access to a beach.

Pollonia is pretty though, with its tranquil harbour, fishing boats bobbing, turquoise roofed churches and line of seafood tavernas. Hot pink bougainvillea spills over the roofs and cats are prolific, wandering the streets, hiding under the café tables and squatting hopefully in the garbage areas. The beach is scenic from a distance, as it is planted with small silvery pine trees. However, the sand isn’t the prettiest colour - it’s a muddy beige - and I’ve watched all the felines prowling here at night. I have a suspicion it’s a giant litter tray. I think I’ll stick to the swimming pool.

My Apartment in Milos

I’m in the En Milo apartments, very nicely situated two minutes out of the main town, just behind the edge of the beach. I have great views of the bay and port from my little terrace and everything I need in my studio. There’s a kitchenette which I won't be using, as there are no grocery shops in town at all and I haven’t brought any supplies with me. I can’t decide if the absence of a mini market is due to lack of demand or a cynical ploy to ensure that the tavernas are well patronised. So it's crisps and coke for lunch and an early dinner on the quay every evening. The hosts are super friendly and helpful. They're a local family with two sons. The latter also run the local travel agency and half the yacht I’m sailing on for a round the island tour.

The hotel cat makes free use of the sunbeds, stretching luxuriously, then snoozing. She also assumes that the towels folded on my neighbours terrace have been put there to provide her with a comfy place to spend the night

There are ten of us on the boat, and the tour is conducted in English, though I’m the only native speaker. Everyone else’s first language is French or German. Antonis, the eldest son, our charismatic guide for the day, describes Milos very accurately as an open air geological museum. It’s one of Greece’s four volcanic islands and offers a variety of spectacular scenery. The volcano last erupted 90000 years ago, but it is considered to still be a dormant volcano and there are sulphurous thermal springs in the sea and caves around the island. The submerged caldera created a horseshoe shaped island – two sides joined by a narrow isthmus. 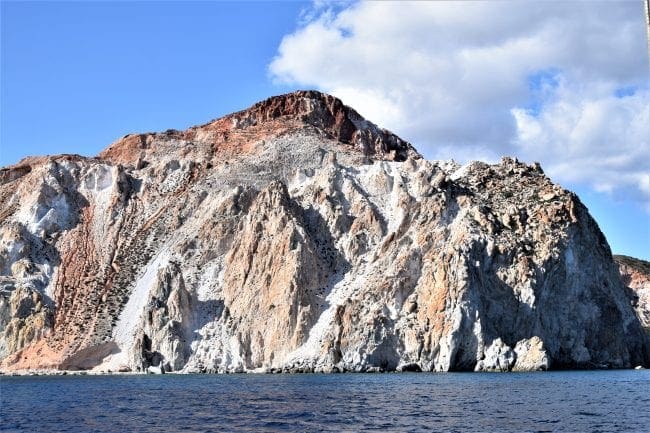 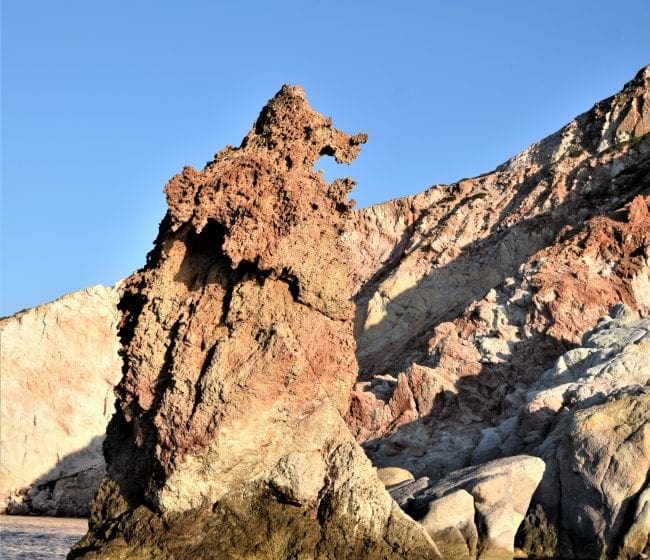 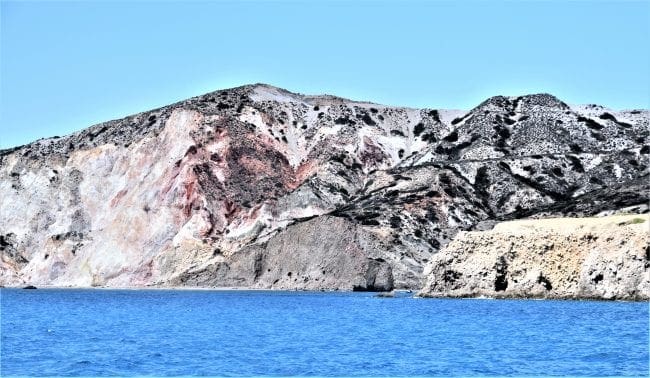 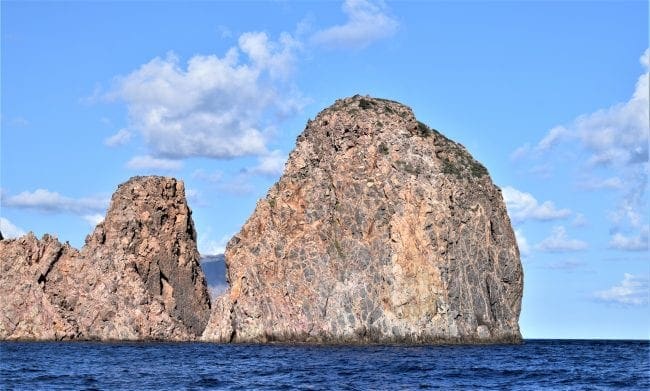 The volcanic rocks contain an abundance of minerals, which are doubly useful. They paint the cliffs and pillars in an amazing variety of shapes and colours. naturally legends have been woven around the pillars - especially the one that looks just like a bear.

And they have made the island wealthy. There have been mines here since ancient times. If Pliny is to be believed Milos was then the richest source of sulphur in the known world. In addition to sulphur manganese, bentonite and perlite are also lucratively extracted. Some of the mines are now in ruins, some still operational and nicely hidden from the main tourist routes.

Milos and the Sea

Just in case mineral wealth wasn't enough Milos also has what is said to be the safest and best harbour in the Mediterranean. It was utilised by the British in World War I and Germany in World War II; there’s still a submarine net across the entrance. So Milos has made its name through seafaring exploits and especially, historically, the provision of pilots to aid navigation. These were consequently very wealthy men, who lived in opulent villas close to the entrance of the harbour. Here, they could observe the comings and goings on the water.

This entrance area has the most ancient remains and is where the Venus de Milo (now in the Louvre) was discovered, the most famous of the artefacts retrieved round here. Created sometime between 130 and 100 BC, the statue is believed to depict Aphrodite, the Greek goddess of love and beauty. However, there's some debate around this. Some scholars claim it is actually the sea-goddess Amphitrite, who is venerated on Milos. There is also an ancient Roman theatre on the hillside here, as well as a labyrinth of catacombs.

Wealth from mines and seafaring meant that the people of Milos were all in gainful employment and, as a result, the island came late to tourism; despite its attractions it’s possibly not as well known as other parts of Greece. 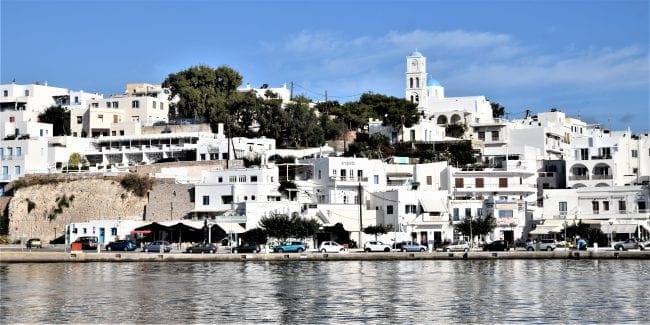 Most of my boat’s sightseeing, unsurprisingly. revolves around the scenic wonders of Milos. Kleftiko is the most renowned area, with its stacks and caves and ultra clear water. I’ve heard of the Greek dish, lamb kleftiko, but Antonis tells us that the word kleftiko actually means thief. The caves here are where the pirates or thieves stashed their haul – or treasure - if you like fairy stories. Barbarossa lived here for 25 years. The dish is called kleftiko, as you bake it with a lid on it, so that it can’t be smelled and give away your location. 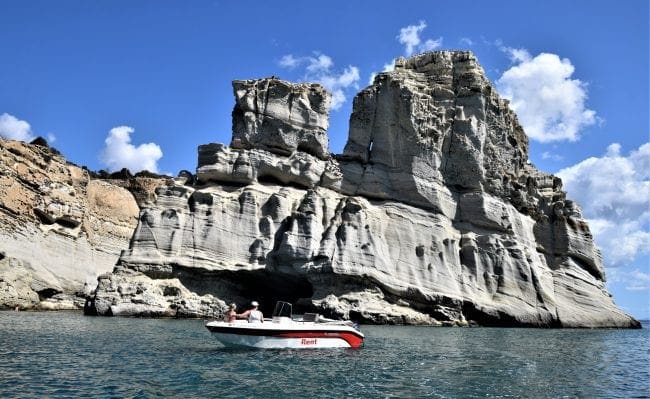 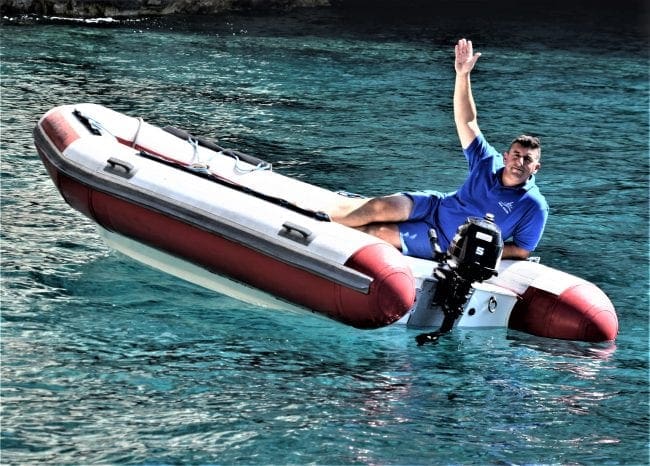 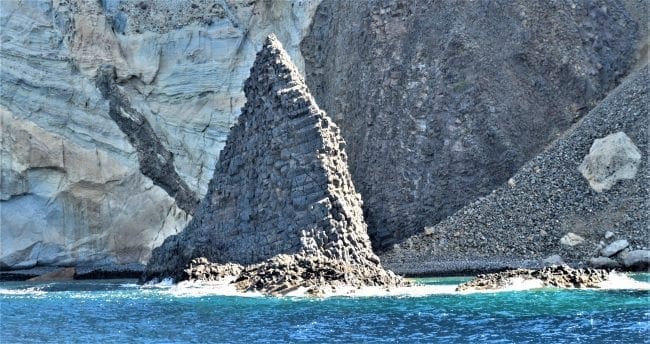 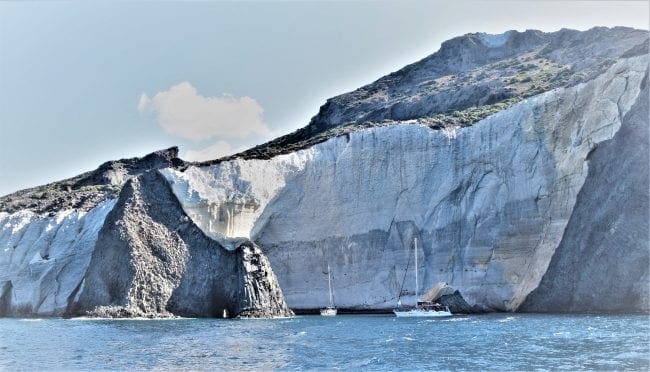 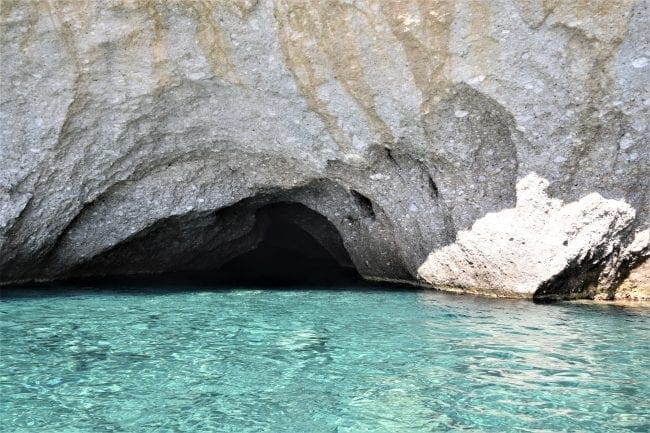 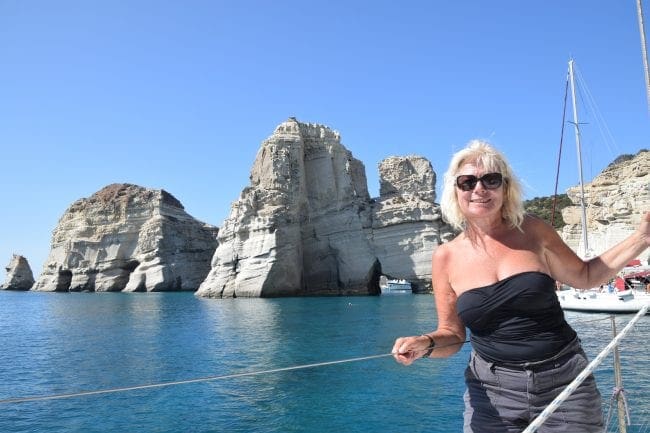 There are numerous beautiful beaches (mostly inaccessible) with cinnamon streaked cliffs, striped stacks and hexagonal lava formations spouting vertically out of the water. There’s little habitation round most of the coast, though there is the fortified Iron John monastery, perched on one cliff top (too far way to photograph properly). It has huge wooden doors, but these were said to become as strong as iron (because of God’s intervention) when the pirates attacked, so they couldn’t be battered down. Undeterred, the pirates clambered on the roof. One lopped off the top of the dome and insinuated his hand through the hole, to fire his pistol inside. His hand was instantly chopped off (God again) and the gun is on display in the monastery.

It’s a good day, with plenty of food and drink on offer - though a long one. We sail back into Adamas at seven thirty, as the sun sets.

I’ve hired a car and the rental agreement has a tiny map at the bottom with a ring on i,t to show all the places I’m not allowed to drive the car, as the roads are too bad – they’re mostly dirt. From east to west, Milos measures about 14 miles, from north to south eight miles. The greater portion is rugged and hilly, so the ring covers most of the island - nearly all the west and some of the east.

They might have extended the no-go zone still further if they’d seen me edging cautiously, on the unfamiliar right side of the road down the steep slopes and narrow lanes that are the approaches to the beaches and tiny fishing ports. Plaka, on the hilltop, with its bustling shops and churches, is especially challenging. The cars are parked with gay abandon and the locals charge their vehicles straight through the remaining space. There's just enough to squeeze by. 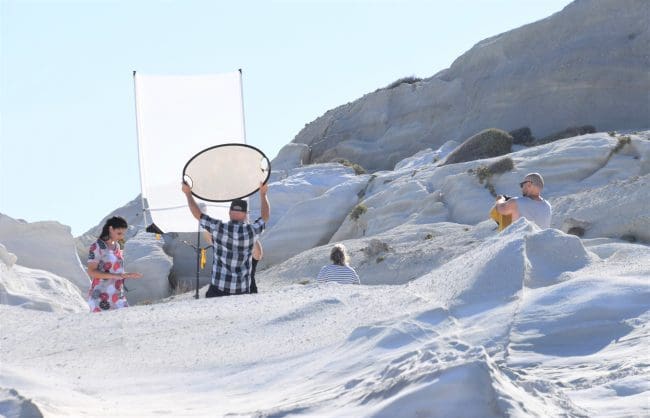 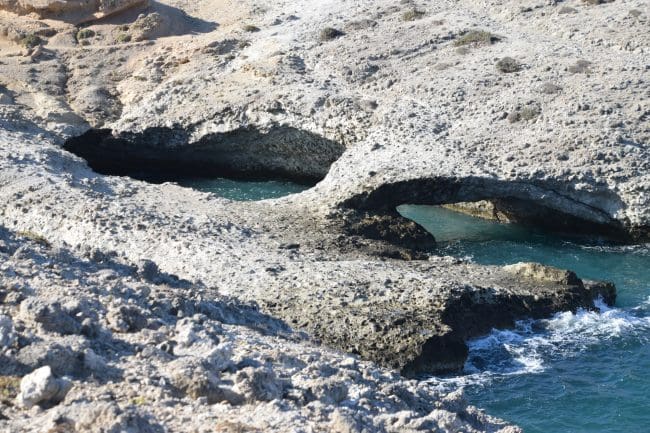 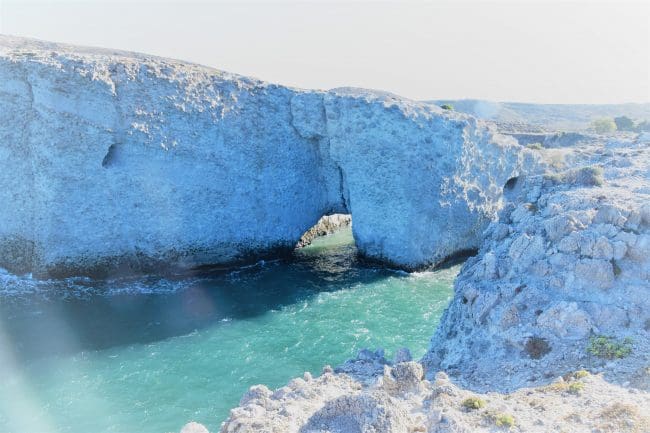 More geological wonders. Sarakiniko Beach is snowy white stone with caves and a creek and an assortment of stacks and pinnacles. I’ve been warned to go early, to avoid the hordes and it is busy, despite the current ‘quiet times’. There’s a model posing amongst the most extraordinary rocks, screens, reflectors and cameras on tripods. I’m trying to work round her.

There are caves all along the coast – Papafragas Beach has still more, lashed by the waves. Firapotamos Bay (great name) has the bluest possible sea. Firiplaka Beach has more stacks and beautifully coffee and soot splodged cliffs. Tsigrado next door, is tiny, the sand has been eroded away and what there is, is reached (if you’re feeling adventurous), via a wooden ladder. 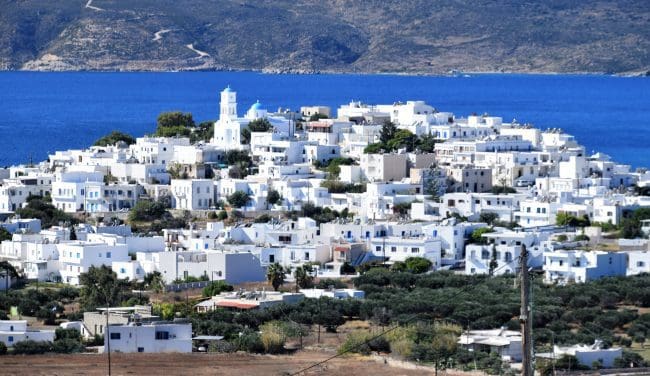 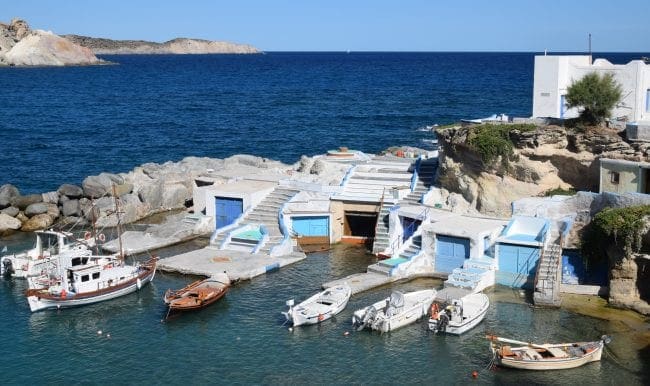 The fishing villages, especially Klima and Mandrakia, are almost impossibly cute. The houses here are called syrmatas – huts built into the rocks with boathouses below. It seems that colour is permitted alongside the harbours and the boat house doors are a rainbow of shades. The boats arranged perfectly in arcs out front. Tavernas on cliff tops with amazing views across the bays and little churches set on the points below. What more could you want?

Dropping down into Klima is far too thrilling. It’s a string of narrow hair pin bends down a steep hill edged with thorny vegetation. And more vehicles. I’m following another rental car and the occupants spill out into the parking bays at the bottom, sighing with relief, alongside me. Jay and Beth are from Calgary in Canada. We pile into the waterside bar and Jay lights up a huge cheroot to accompany his beer. It’s a good way to deal with stress – he was the passenger. 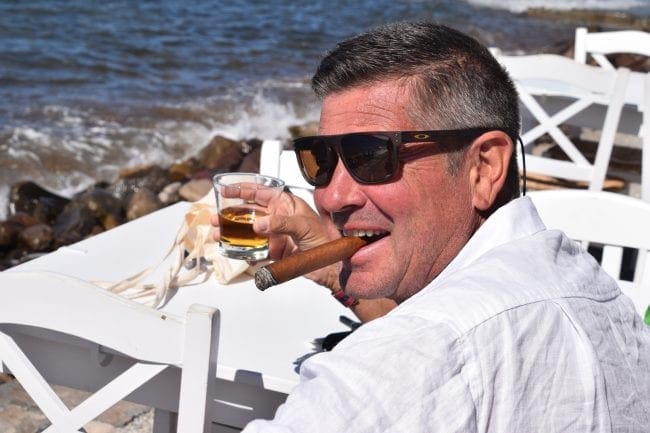 The al fresco taverna food isn't cheap, but it's good. in Pollonia. Jay and Beth are staying in Plaka, but pop over to Pollonia to eat with me on my last night. Antonis has recommended Enalion, another taverna on the waterfront – it’s a good choice. I drink luminescent pink cocktails made of Greek mastiche - it’s called N.O.S. (No ordinary spirit.) The mussels and squid are cooked exquisitely. We chat non stop. The cats look on plaintively from the beach behind. 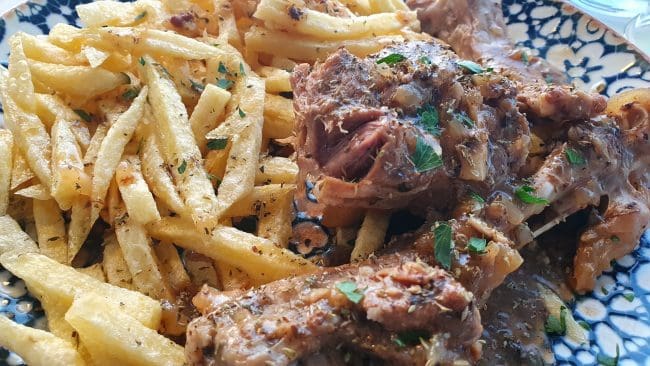 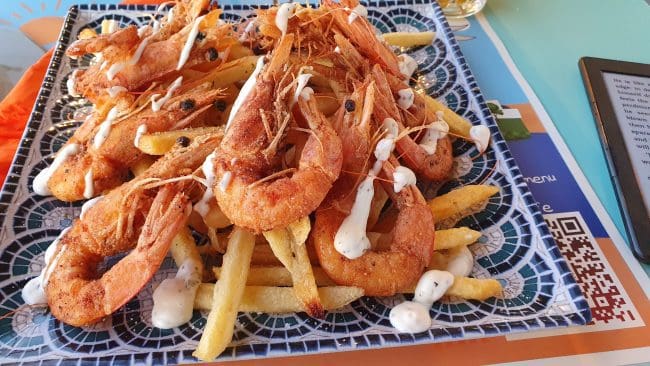 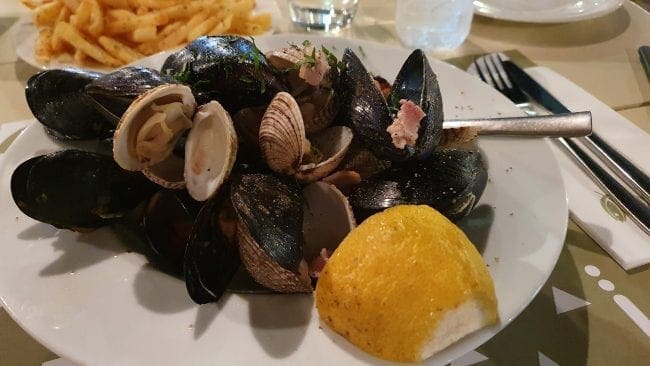 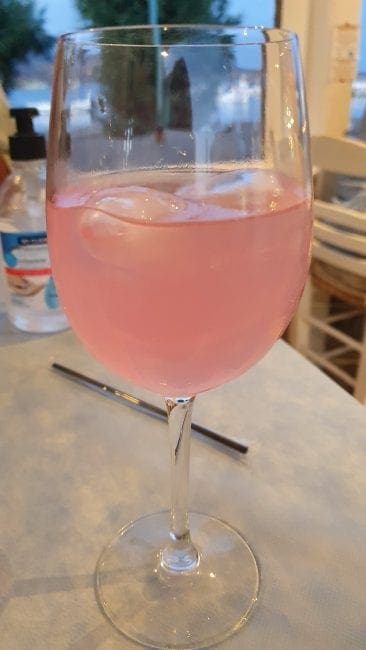 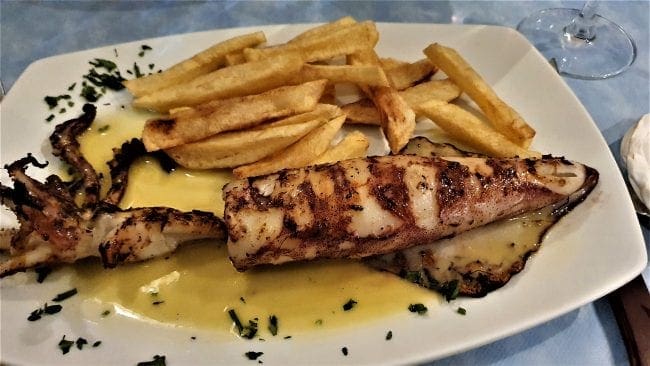