Thursday - An Unpromising Arrival in Singapore

A semi working weekend in Singapore. An evening  Singapore Airlines flight – very nice free champagne and the best landing ever.  I am very pleased with myself until I check my belongings in the arrivals hall in Changi Airport and find both my purse and Filofax missing. That takes a while to sort.

Then a taxi into the city.  My hotel is lovely and I can’t get over the cleanliness and order after Manila. There are lane markings and everyone overtakes on the outside.  The Chinese staff in my hotel though are not nearly as welcoming as the Filipinos.  The hotel is on the Singapore River and has about 40 floors - fabulous views. 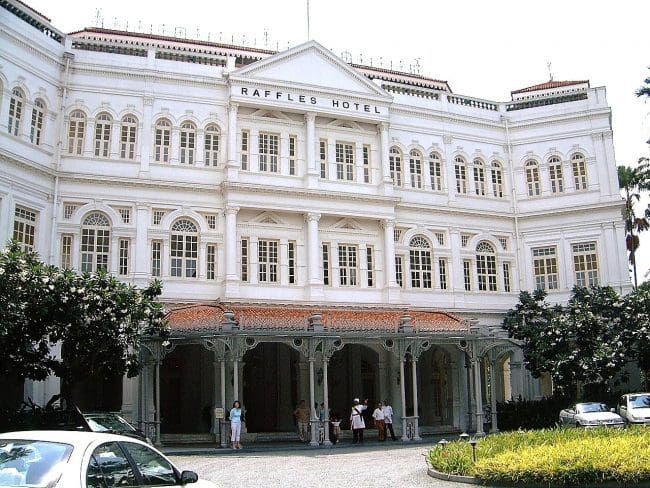 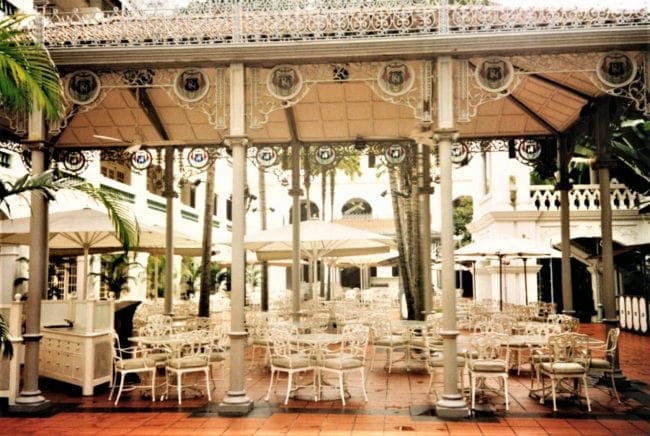 Work today and then the biggest treat - being taken out to dinner at colonial and newly renovated Raffles Hotel.. Raffles is iconic, the must go to place for a drink in Singapore. It's named after Sir Thomas Stamford Raffles, who founded Singapore. I'm surprised to learn it actually began life as a private beach house in the 1830s. Then it became the Emerson Hotel. The Armenian Sarkies brothers took over the lease, renamed it Raffles and opened with ten rooms in 1887. The rest is, literally, history. It's even been the title of a film. Staying here is well beyond my means, it's an all suite establishment.

It's nearly ten years since I was here last, for a 24 Hour Visit, and it's looking pristine, almost new. I don't think it has as much character. but the palm filled courtyards are still there First, the obligatory sickly sweet Singapore Sling in the Long Bar, with its rattan fans and the traditional peanut shells all over the floor. Next, a buffet meal in the Tiffin Room, which specializes in a variety of lightly spiced dishes. You can eat as much as you want.  It's very good and very opulent.

I'm due to meet a friend of a friend, Claudia, outside Scott’s Shopping Centre, just off the Orchard Road (its no longer there).  My taxi driver informs me that this is the most expensive shopping in Singapore and the tenth most expensive in the world and that I should go to Chinatown instead.  No doubt he has a brother with a shop there.  Claudia is delightful – a very mature 22.

She takes me through all the malls down world renowned Orchard Road. It runs the whole gamut - department stores to teeny boutiques. Emerald Hill for more traditional shops. It's not as cheap as I had hoped. In fact, in parts it's definitely high end (starting with Scotts) - Louis Vuitton, Patek Philippe, Saint Laurent, and Tiffany & Co. There’s also Singapore’s oldest departmental store, TANGS. a fascinating browse.

I stock up on salad cream, Branston pickle, shampoo, shaving foam, shortbread and CDs unobtainable in Manila (some items have been ordered by colleagues). Then on the bus to Holland Village and a complex of little Asian shops full of furniture and embroidered clothes.  The latter are irresistible and I buy a waistcoat and a dress.

Claudia has a barbecue to go to and I can hardly carry anything else, so back to the hotel and then a walking tour of nearby Chinatown, full of enticing little shops.  A tailor tries to sell me a beautiful Shantung suit – only £450, handmade to fit.  I buy a blue elephant sarong for £3 instead. 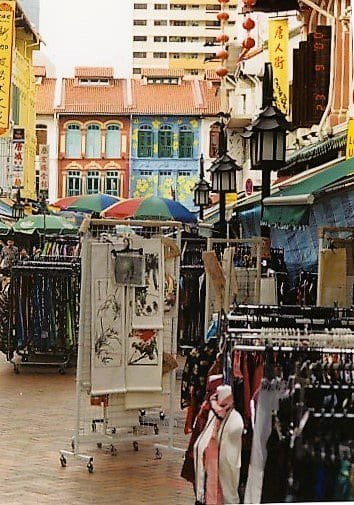 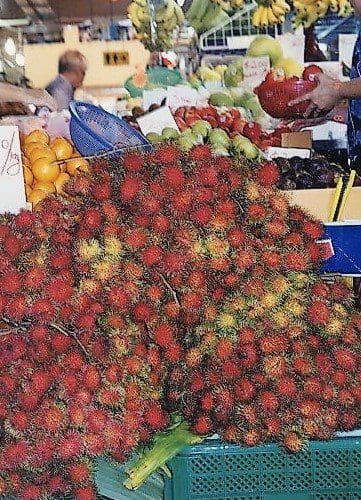 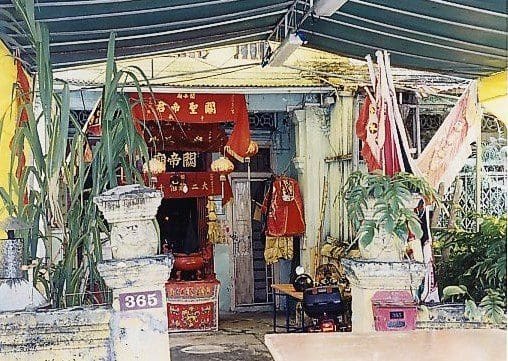 I have been invited to have dinner with Claudia’s parents at the Swiss Club out in the jungle edge of Singapore Island.  Claudia’s father is Swiss, her mother Indian.  These people I do not know welcome me and buy me dinner though I have to resist the local special – pork knuckle with sauerkraut.  A beautiful chalet setting under the palms with an ancient billiard table.  Five minutes after arriving an Indian called Rajat invites me to go to a nightclub with him.

Last time I was in Singapore I went to a nightclub to discover the navy was in town. It was fun. This time, the club is called Anywhere – stuck on the top floor corner of a mall, but packed with expats.  It is run by the band themselves, called Tanya, playing good rock music (old stuff of course). The lead singer is a cross dresser with very long false eyelashes.  I have a great time dancing and trying to be sociable with the two other Swiss who are with us, but the music is too loud to talk.  Rajat turns out to be a brilliant cliché. Married, but his wife does not understand him - they lead separate lives.  Can he come in for coffee?  Just coffee – we don’t have to do anything else.  How quaint. 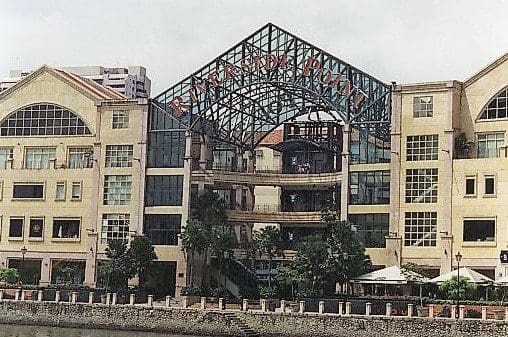 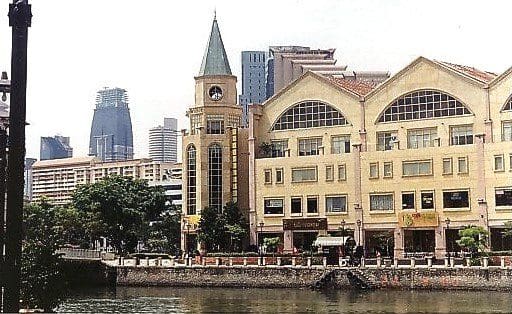 There is just time to wander along the Singapore River and around more shops and restaurants on humming Clarke Quay and Boat Quay. During the colonial era, in the nineteenth century, Boat Quay was the commercial centre of Singapore, the loading and unloading point where barges would transport goods upstream to warehouses at Clarke Quay. Here, at Boat Quay, the river is said to beshaped like the belly of a carp, which augurs wealth and prosperity. so everyone wanted to build their shop here and the area became crowded. At Clarke Quay tourist 'bumboats' jostled for space. The area became so busy and polluted that the government decided to relocate its cargo services to Pasir Panjang.

What to do with the existing quays? The area was cleaned up, buildings restored and many new buildings appeared, 'in the style of the old historical buildings. Clarke Quay Festival Village was officially opened on 10 December 1993. The shop-houses on boat quay were reconstructed and opened as new businesses.

Then, Claudia arrives to take me back to the airport and Manila again.

I met Donna, with her nephew, in Nepal, after I had my appendix out. Now I've flown out from Manila. I'm on my way to tour East Indonesia. and she's kindly invited me to stay at her flat en route.

We visit Little India, now renovated, since I was here on my 24 hour visit, with its beautifully painted, but too perfect, rows of houses, the food-market and the temples. The Sri Veeramakaliamman Temple, in the heart of Little India, on the Serangoon Road, is dedicated to Kali, a protector goddess and destroyer of evil. Mustafa's Centre is a 24 hour shopping mall that claims to sell everything.

Like most suburbs of this type Little India is not just inhabited by Indians. There are plenty of Chinese shops and visitors for example. And the Sakya Muni Temple, with it's 15 metre high Buddha. But it's the area of the city where the Indian heritage is conserved. 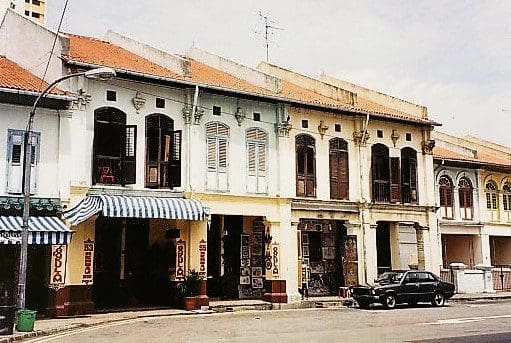 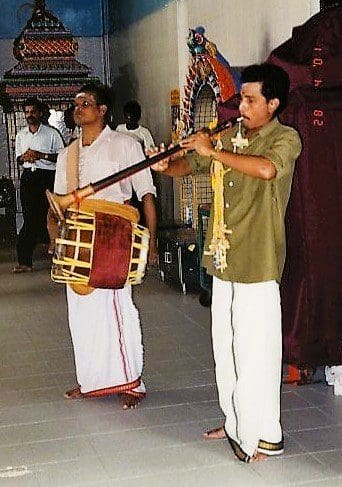 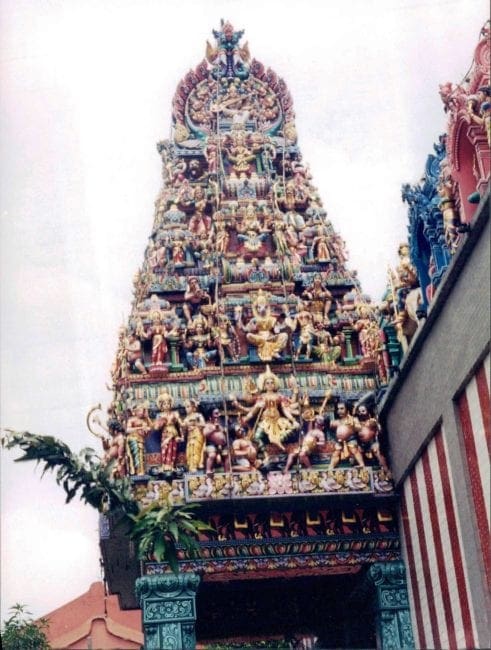 I've read that this area (known as Tekka in Singapore) once had a racecourse, cattle herders and brick kilns. (In the mid nineteenth century.) Then cattle trading took root, run mostly by Indian migrant workers (and convicts) and the culture became more Indian. There are correspondingly more Indian cafes and restaurants: roti, pulled tea (lots of showmanship involved here), spices. Soem of the streets are named after past residents: Dunlop Street, for an European family, Belilios Lane, (for a cattle importer)and Campbell Lane for British soldier, Sir Colin Campbell. Its a vibrant and colourful place, so its no surprise that it's home to Singapore's artists too. Most of the street hawkers though, have been relocated to Boat Quay..

We visit the American Bazaar three times. We eat ice cream sandwiches (yummy) in the street, then cakes at the Shangri La and dinner at the retro American Club. 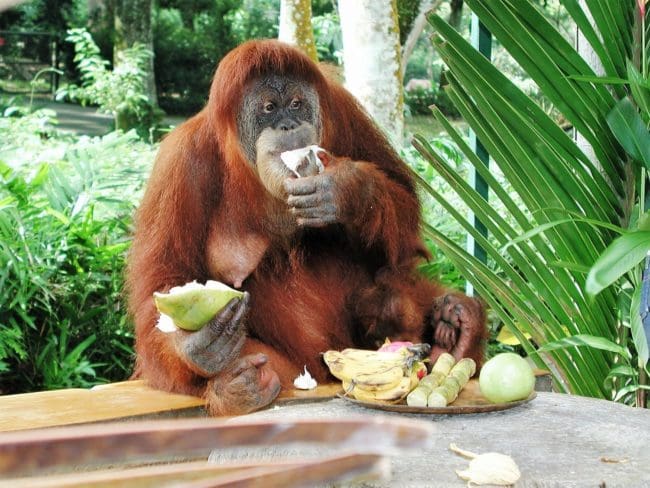 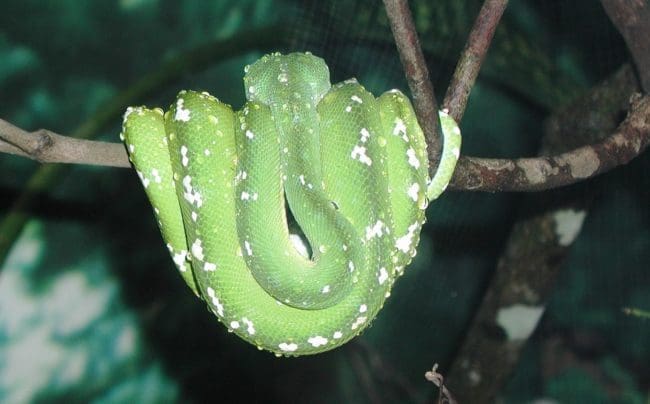 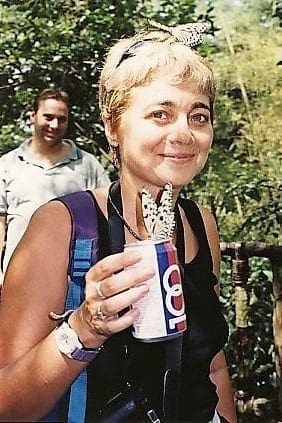 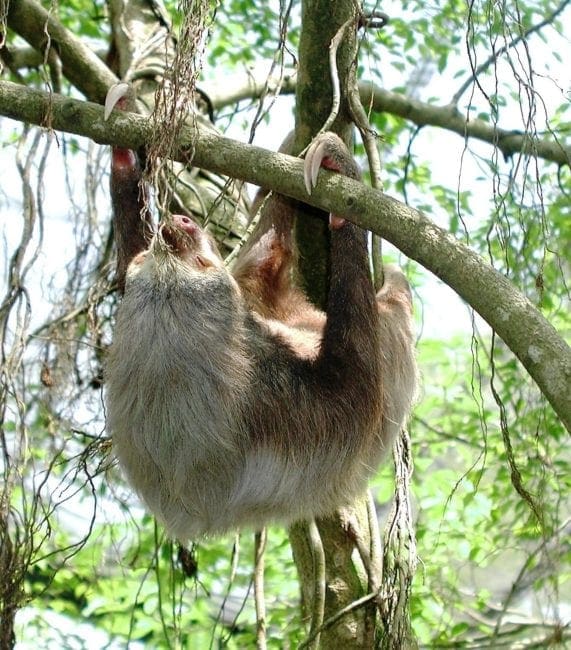 I buy my first digital camera from the spivs on the Orchard Road. It's hard work bartering and I'm not sure I got a bargain. Then, out to Singapore Zoo to try out my new purchase on the snakes and orang utans. There's a primate show on and the poor apes are being forced to eat breakfast with members of the public.

I don't do very well money-wise in Singapore. A hundred dollars has disappeared from my purse, this time. I think it might have been Donna's Filipino maid who took it. But I can't tackle her. She's run off with Donna's husband. And I'm off to Bali.