I was going to Slovenia, but they won’t let me in, as I’m English and they don’t like the way we’re handing the coronavirus crisis. So, I’m now on plan E and I’m on my way to visit Vaduz on my rail pass, travelling from Milan.

l I have to be scanned to check my temperature before I’m allowed onto the platforms, which are extremely busy, but my train is almost empty.

This is billed as a scenic ride. There are already grey jagged mountains again on my right and we lurch through Monza. No sign of any motor racing that I can see. North to Como, the scenery is already engaging with cute cuboid houses lining bobbly green hills. There’s just a glimpse of the lake. Blink and you miss it. The camera certainly did. 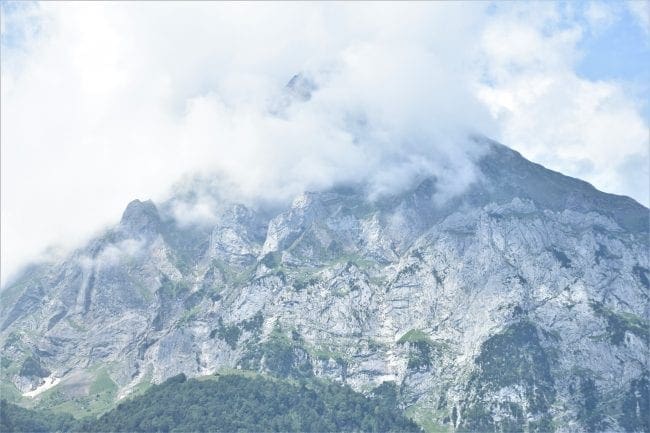 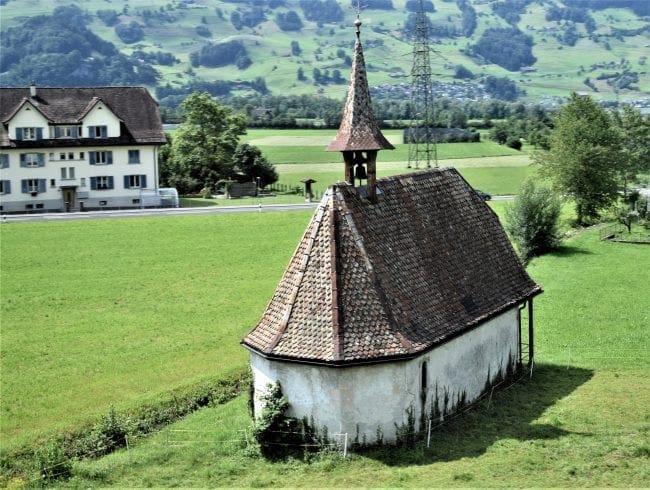 We run alongside shimmering Lake Lugano next. It’s preceded by tomato greenhouses and neat vine terraces. I think that must mean I’m in Switzerland now - Vodafone confirms this. The mountains here are all swathed in green vegetation, the odd patch of emerald velvet, rugged and impressive rather than beautiful, the creamy scars of limestone quarries line the lower slopes.

A twenty minute tunnel, turns out to be the Gotthard Base Tunnel, the longest tunnel in the world, (it took the title from the Channel Tunnel) followed by the VierWaldstatter See. That’s a great name, but it’s more commonly known as Lake Lucerne. The scenery now what one expects from an Alpine journey. Taller mountains, soft lush slopes, chalet houses, churches with onion domes, glistening lakes. It’s incredibly pretty. 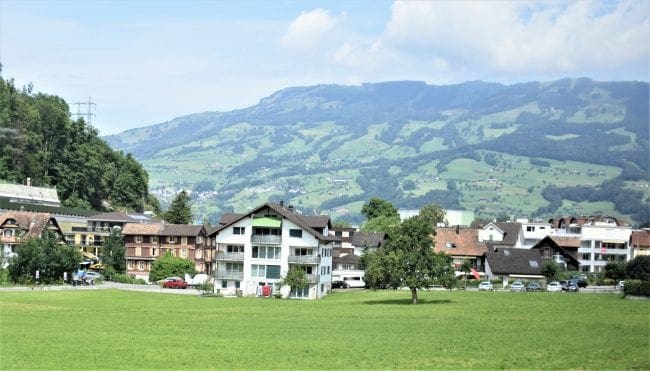 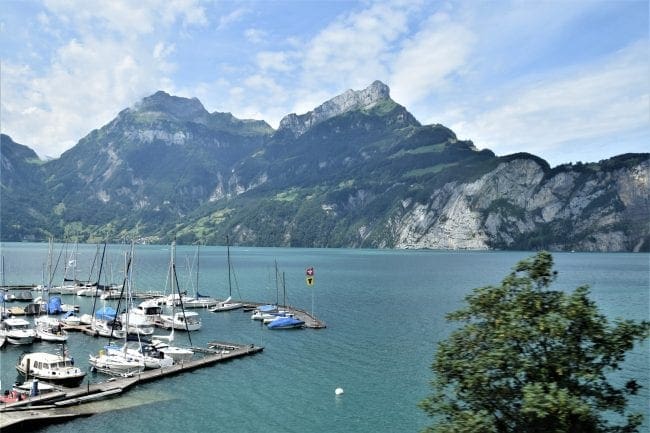 The Swiss are living up to their stereotypes and we pull into Zurich station exactly on time. Sorting my next leg isn’t quite so easy. I have matched the departure time to a train and two service agents on the concourse have assured me that this is the correct platform, but I would be happier if Sargans, where I’ve been told to disembark, ( Liechtenstein doesn’t have links to the national train network) was mentioned on the list of stops. More Swiss efficiency - the information boards on the platform helpfully flash up the different classes of carriages and the stops are displayed on electronic screens, zooming into the details - platforms and connections of each station as we approach. It’s not quite Japan, where this information is even marked out on the platforms, but it’s very helpful. And whoops - we’ve left a minute late. The Japanese wouldn’t have done that.. .

Back down Lake Zurich - plenty of life jacketed folk paddle boarding and swimming in pools sunk into stages and along a gorgeous wide valley to the more scenic Walensee. Thankfully, Sargans has been added to the information board as the train advances and other places drop off. There’s even a map tracking our journey with a scarlet highlighter. 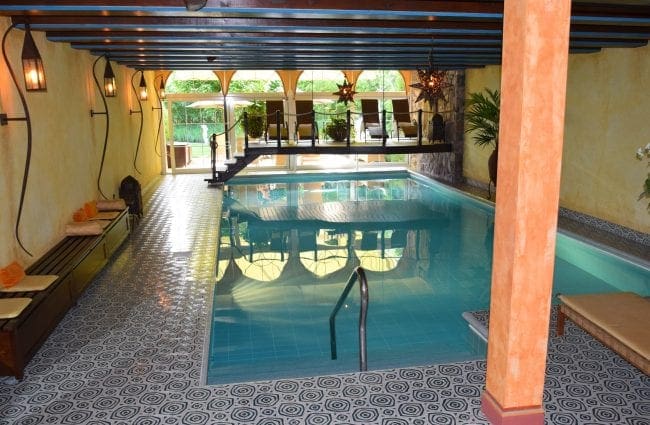 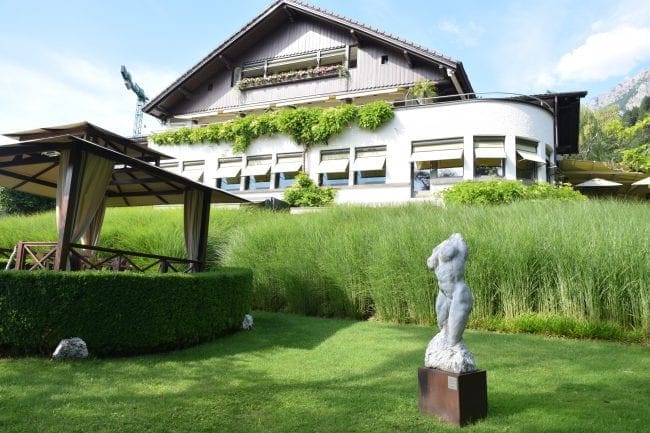 The Park Hotel Sonnenhof has four levels and my room is at the top - I’ve been upgraded, again, as there are hardly any guests. There’s a lawn on the roof of the building below mine, so as not to interrupt the view, a sort of infinity lawn I suppose. They use a robot lawn mower to keep the grass down. Technology is a big feature. You have to scan the hotel directory and walk booklets – it’s all very hygiene friendly in these Covid- aware times. My room is stylishly neat and has the softest and fluffiest of duvets. The only jarring note (IMHO) is the bizarre inclusion of life size fluorescent blue sheep, who are scattered through the gardens.

The service is excellent. There’s a very tranquil spa, with a swimming pool and a Michelin starred dining room on the terrace. There may not be many occupants in the rooms, but the restaurant is packed out every night – it’s obviously well thought of.

Prices to Die For 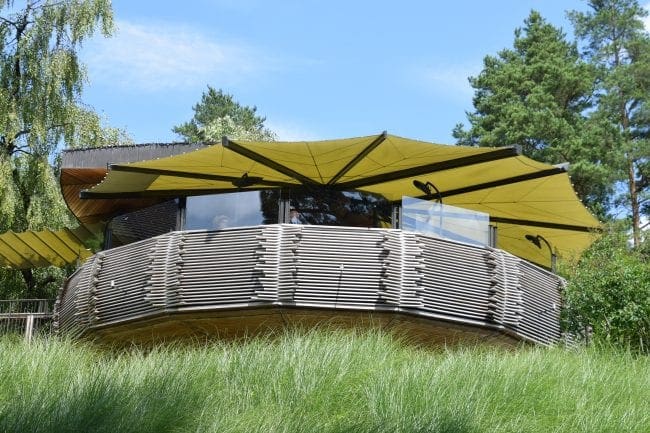 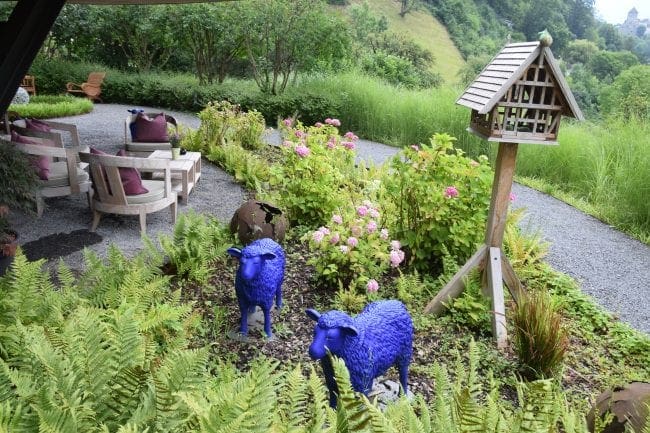 All this of course comes at a price, especially as this is Swiss (well in all but name) provenance. The cheapest massage comes in at £130 and the prices of the food make me wince. Two courses of the set menu is £60. I’ve sampled it and it was very tasty, but I’m not that rich and I’m writing this in my room eating a bag of potato crisps. They were £3 from the supermarket. The only other drawback to the hotel is also its advantage. It’s up a very steep hill. The fifteen minute walk back from town takes courage.

Everything is very Swiss-like and proper – there are expectations as to how things will be done. I’m berated for taking my bag to the top pf the stairs. ‘it is much easier for us to find it if you leave it in your room…’

The Best in Town

My hotel probably has the best view in town, if you don’t count Vaduz Schloss, at more or less the same altitude, just along the mountainside. And the castle is included in our view. Liechtenstein is basically the west side of one long valley divided by the Rhine. The stunning mountain panorama, with its two tone green and jagged tops mainly comprises the Swiss Alps.

The word Vaduz always reminds me of the brilliant radio comedy programme Cabin Pressure, where MJN Airlines goes to Vaduz and Captain Crieff eventually marries the Princess of Liechtenstein. It is not the prettiest of towns. They’ve done a good job of hiding the specialised engineering industry that makes Liechtenstein its money; so, whilst the buildings are not dirty or ugly, they’re not, barring one or two, exactly charming either. There’s a modern pedestrian area, known as the Städtle, with the sleek Kunst Museum (modern art), the National Museum (archaeological and cultural artifacts in a medieval building) and the Post Museum (philately).

Up the road in Schaan, I read that there is even a calculator and typewriter museum. There are also a couple of avant garde constructions, including the National Parliament, as well as the cathedral, which is about a hundred years old but has only been a cathedral since 1997. The whole is presided over by the castle, which dates back to the 12th century and is where the prince lives, looking down from his lofty perch. Much is described as princely this or that. I’ve even been given a book of ‘Princely Hikes’.

When I pause for breath en route back to the hotel in Vaduz Oberdorf (Upper Village), which is often, I admire the colourful window boxes. Some of the timber dwellings along here even have their own vineyards. One particularly spectacular fourteenth century mansion, with a tower and stepped gable, is known as the Red House. I would have said rusty brown.

I’ve decided to try an ‘easy walk’ from my Princely Hikes guide book. It takes me along past the castle with more amazing views down into the valley and across to the Swiss peaks. Then I’m directed into a forest, where I climb steadily upwards for an hour. There’s no one else around and it is backbreaking work, annoying when I know that the lovely scenery is tantalisingly just out of range. I eventually emerge at the village of Rotaboden, almost 1,000 metres up. My reward is typical alpine scenery: lush meadows, wooden chalets and cow bells tinkling. The velvet slopes are the foreground for some dramatic loden peaks behind. This is Walser country and there are signboards (in German) explaining the significance of the timber architecture and carvings to the local Walser peoples.

Downhill to Triesenberg, where I am directed to drop onto another woodland path to complete my circular walk back to Vaduz. The map is not easy to decipher and I pop into the supermarket to ask for directions to the start of this section. The German word for footpath is Wanderweg - which I think is just great. A man with a van says my Wanderweg is not easy to find and offers me a lift to the start. So, I climb in and he takes me back up the hill to Rotaboden and the path I have just climbed. I don’t have the will to climb back down to Triesenberg and I’m definitely not going to return by the same path. Instead I follow the hairpins of the (fortunately) quiet road down to the castle and drop down into the town.

Yesterday’s exertions have taken a toll on my body and my muscles are aching badly. I don’t think I’m up for another ‘easy walk’. Back down to the Städtle to take a thirty minute bus ride to Malbun. Even the bus has the monitors displaying the stops and our progress across the map. I heartily approve.

Malbuntal, is a hanging valley above Triesenberg. There are numerous chalet hotels and several chairlifts, forming a reasonable size ski resort at 1600 metres. The large four man Sesselbahn is still operating for the few hikers who are around, dutifully waving their poles, wafting them up to 2000 metres. As it’s summer there is ongoing building work, plastic orange webbing , slopes being carved out with JCBs. Again, I would describe the stark grey slopes as dramatic rather than pretty.

Just over the peaks is the Austrian Vorarlberg. Lichtenstein really is tiny. Cloud is building up, and at 13 degrees Celsius its decidedly Alpine fresh up here, so I opt to walk on the road again and hobble back down, alongside a miniature gorge and a suitably gushing stream to the village of Steg. This is small and utterly charming with classic wooden chalets and the odd Stüberl. More clinking cowbells and a tiny grey and white chapel. Now it’s raining and time to get the bus back to Vaduz. I might just have the energy to clamber back up the slope to the hotel before my legs give out.

The drizzle develops into more continuous rain for the remainder of my stay. White wisps of cloud hang outside my balcony and at times the schloss disappears altogether. But as I can hardly walk it doesn’t really matter. I need to spend another half a day rebooking hotels, changing dates and cancelling accommodation in line with Plan F. I can just manage to shuffle down to the pool.

When did Liechtenstein become a country?

Is Liechtenstein a Rich Country?

Is Liechtenstein in the EU?

Liechtenstein is not in the EU, but it is the only microstate (not counting Iceland by population) that is part of the EEA, as it joined the European Free Trade Association (EFTA) in 1991 (previously, it had participated in EFTA through Switzerland's membership). All EFTA states bar Switzerland are in the EEA, which gives them access to the EU single market. It also obliges Liechtenstein to apply European Union laws considered EEA-relevant. As of June 2016, around 5,000 of 23,000 EU legal acts in total were in force in the EEA.

What is There to See and Do in Liechtenstein?