Despite the inauspicious date an evening flight (later than I’d intended because of a last minute very annoying change by Cathay) from Manila to Hong Kong, South East Asia 5. I've been to Hong Kong several times before. The first encounter was en Route to Australia - Round the World 1. Another time, I started a trip through mainland China here.

This weekend, I have arranged to meet friends Susanna and Irvin, on their way to Australia, on a month’s break. From the new airport, Chek Lap Kok Airport, the express train speeds me to the city in twenty minutes. It’s all very efficient, but I miss the slightly alarming view, as the plane weaved in and out of the skyscrapers and almost plunges into the sea at old Kai Tak. You could see the occupants of the apartments through their windows.

Sue and Irvin are waiting at the Century Harbour Hotel on Hong Kong Island, and we just have time for a drink in the bar before bedtime. 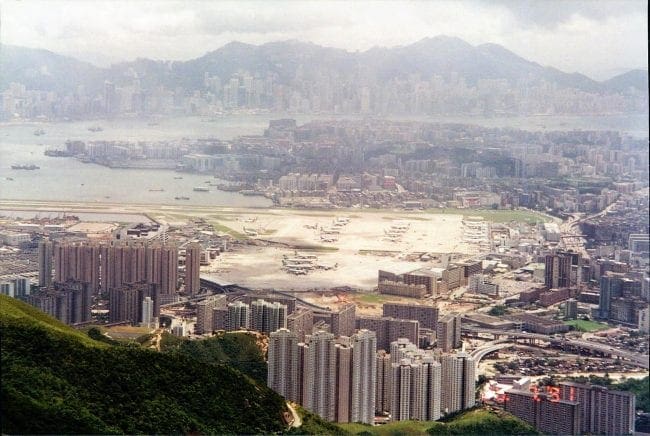 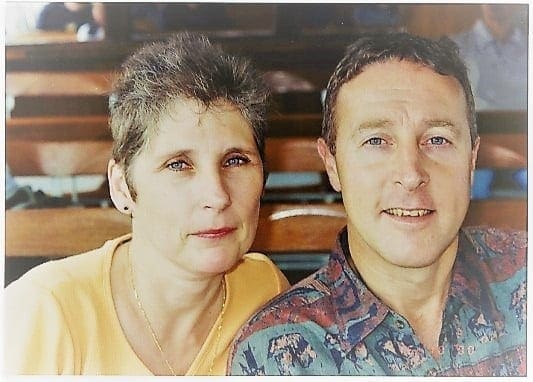 Hong Kong (along with Macau) is officially a Special Administrative Region of the People's Republic of China. It's a major global financial centre and one of the most developed cities in the world. It is the world's tenth-largest exporter and ninth-largest importer. It's also the least affordable and the most expensive housing market in the world. Land is scarce for housing The city has the largest number of skyscrapers of any city on Earth.

Hong Kong was established as a colony of the British Empire after the Qing Chinese ceded Hong Kong Island at the end of the First Opium War in 1841, then again in, in perpetuity, in 1842. The colony expanded to the Kowloon Peninsula in 1860 after the Second Opium War and was further extended when Britain obtained a 99-year lease of the New Territories in 1898. The whole territory was transferred to China in 1997, with the agreement that 'Hong Kong maintains separate governing and economic systems from that of mainland China under the principle of "one country, two systems".

Hong Kong Island, as far as many people are concerned, is Hong Kong and that's usually what it's called - just Hong Kong. The island had a population of about 3,000, mainly fisherfolk inhabitants, when it was occupied by the United Kingdom. The City of Victoria was then established on the island by (in honour of Queen Victoria, of course).

The northern coast, facing Kowloon, is where it all happens. Central area, in the middle of this coast, is the most important, more specifically Wan Chai District. the historical, political and economic centre of Hong Kong. Victoria Harbour between Kowloon and the island is largely responsible for the development of Hong Kong, due to its deep waters. facilitating mooring for large trade ships. 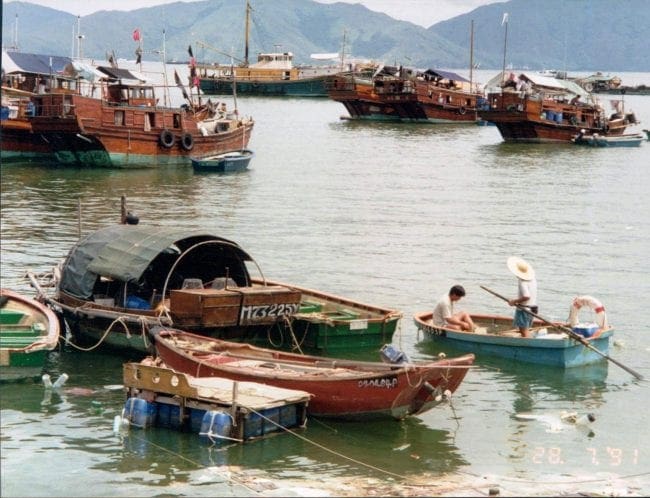 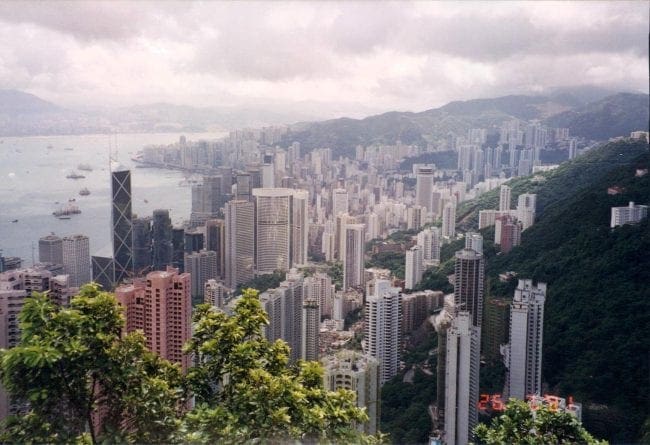 The number one must do in Hong Kong is taking in the panorama across Victoria Harbour from The (Victoria) Peak. It's incredible. Most of the tourists take the tram up (it dates from 1888), but I like the bus or the car. It wiggles up the steep hill, past all the expensive houses and apartments with their prime real estate views here.

You can't come to Hong Kong and not go shopping. Window-shopping around Western and the back of Central and all through Hollywood Road, where all the Chinese antique shops are. Also into the atmospheric Man Po temple, incense wafting from suspended coils and gilded statues of gods. The temple was built in 1847, in homage to Man, the god of Literature, and Mo, the god of War. 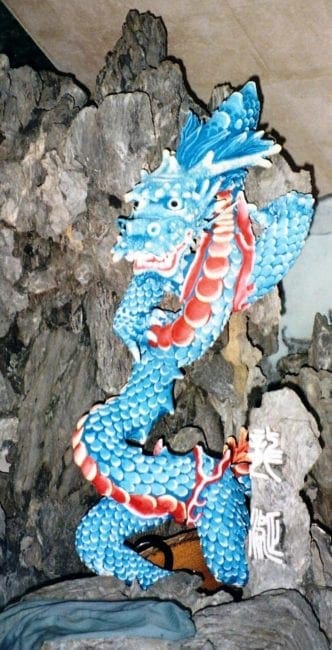 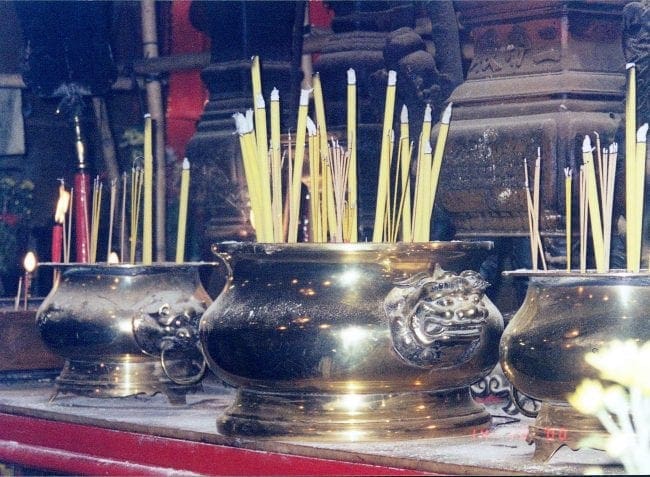 A bus, past the beaches of Repulse Bay, to Stanley Market, in the south. It's crammed with prints, cheap Chinese clothes, tea sets, chopsticks, Tiger Balm and gaudy ornaments. None of them are tempting, but I do need to stock up on Flex hair conditioner. The meal on the terrace in Stanley Oriental restaurant is much more satisfying. We eat on the third floor terrace looking out over the lights of the bay. The local food is excellent, though the Chinese waiter rather spoils it by sulking very loudly because he deems his tip (on top of 10% service charge) to be insufficient. The meal is expensive even by English standards.

Surprisingly, as the coastal areas are so built up, the centre of the island is relatively empty. The mountain ranges here are famous for hiking. There's even a trail called Dragon's Back Hike. I've never had time to explore out here. Back on the top of a double decker bus which crashes along knocking against all the overhanging trees and swaying ominously into roundabouts. We survive and then take a tram onto our respective hotels.

On Sunday, the streets round the ferry terminal are closed. They are crammed with women picnicking, playing cards and gossiping - the Sunday social reunion for all the Filipina maids working in Hong Kong. (Four percent of the population of Hong Kong are from the Philippines.) 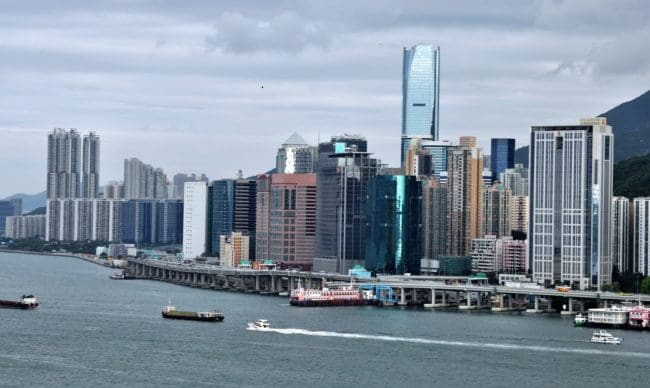 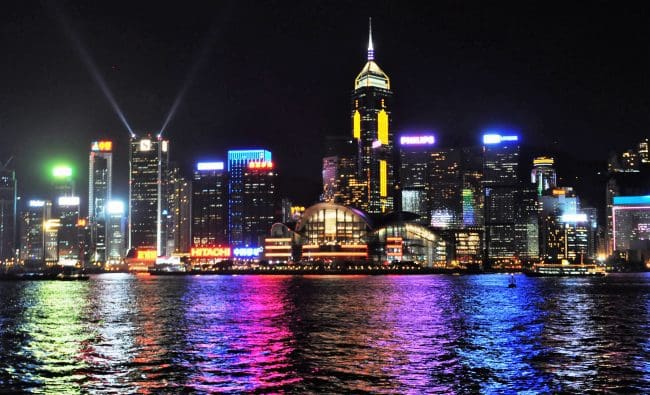 Another tram, to the Star Ferry terminal, where we catch the famous green ship across Hong Kong Harbour to Kowloon, or more specifically, Tsim Sha Tsui (TST) to Central. (There are road tunnels, but no bridges.) Every evening, by the water here, you you can catch Hong Kong's Symphony of Lights show. Lasers are choreographed to highlight the main scrapers, each side of the harbour. It's very pretty.

Kowloon is the area on the mainland, just north of Hong Kong Island, across Victoria Harbour. Yesterday’s weather was wet and cool (for Hong Kong); today is drier and permits the famed, spectacular island views from the boat. There's also a really great view from the promenade at TST, when we arrive. We get to see the many scrapers soaring to the sky in both directions. The Tsim Sha Tsui Cultural Centre is impressive, (Home to the Hong Kong Space Museum and the Hong Kong Museum of Art). As is the Meccano shaped Bank of China Tower, on the opposite side. But it’s a shame that the iconic fishermen’s sampans and junks have almost totally disappeared. 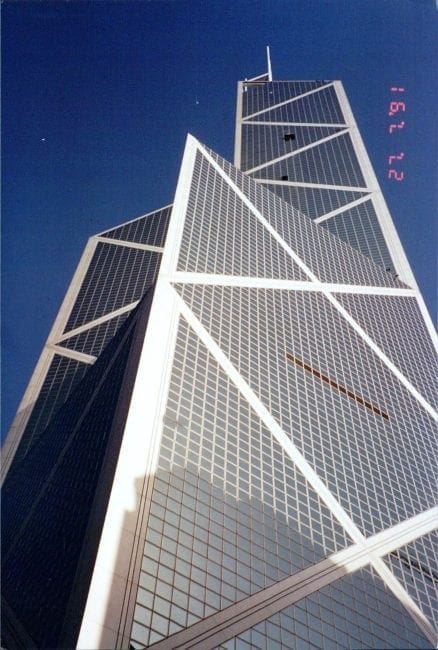 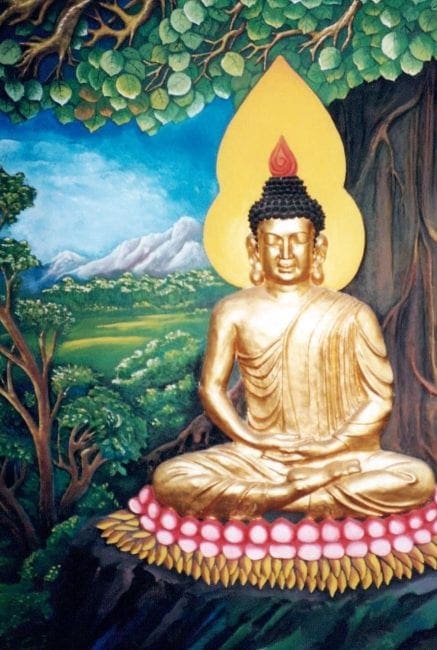 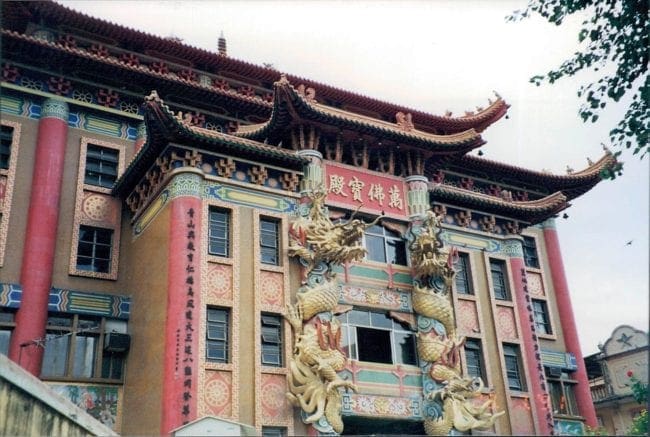 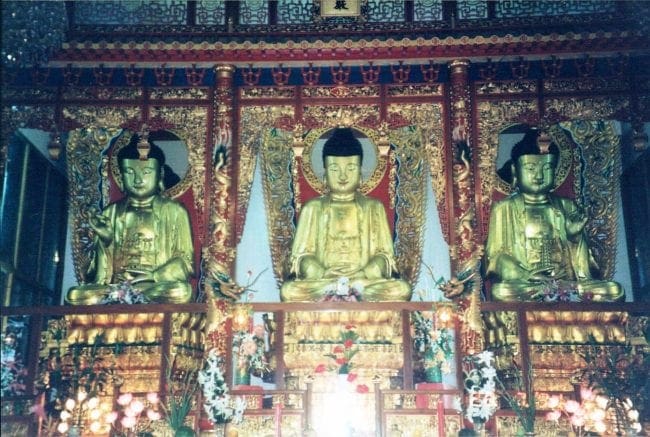 Copy watches abound. I almost feel guilty that I haven’t bought one. Three prints and a MacDonald’s instead. Kowloon Park and another gilt and scarlet lanterned Tao temple. 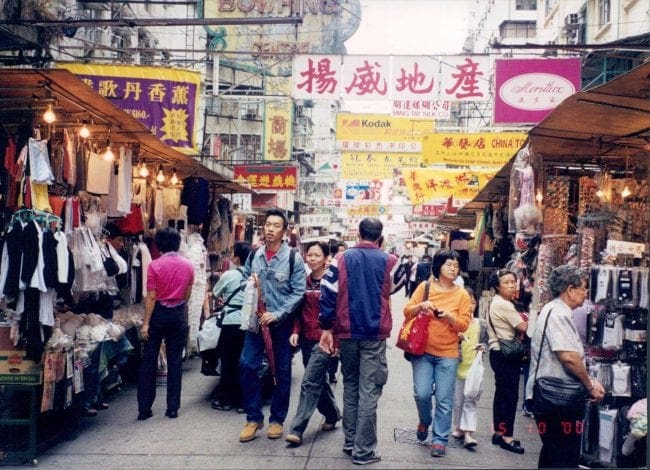 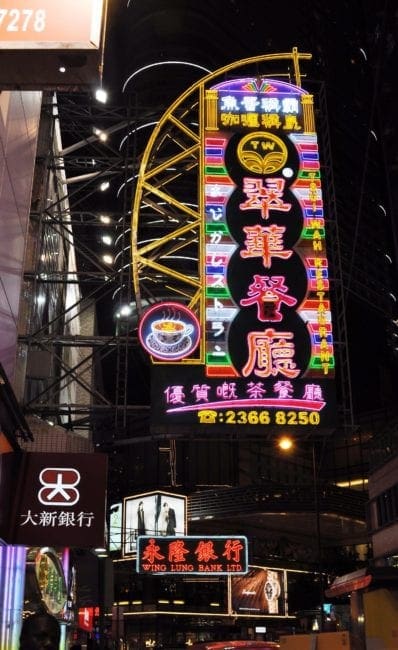 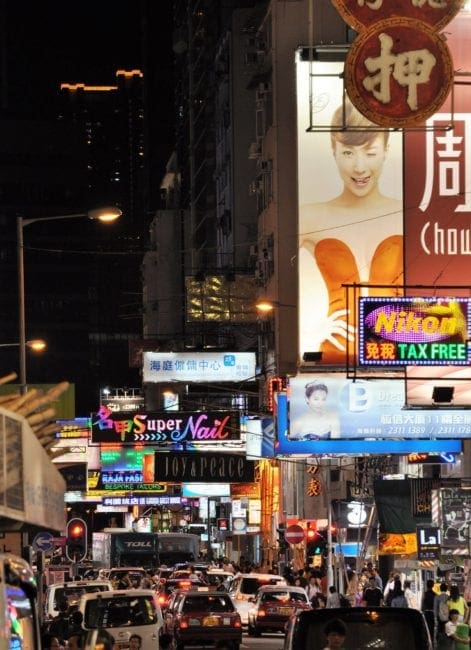 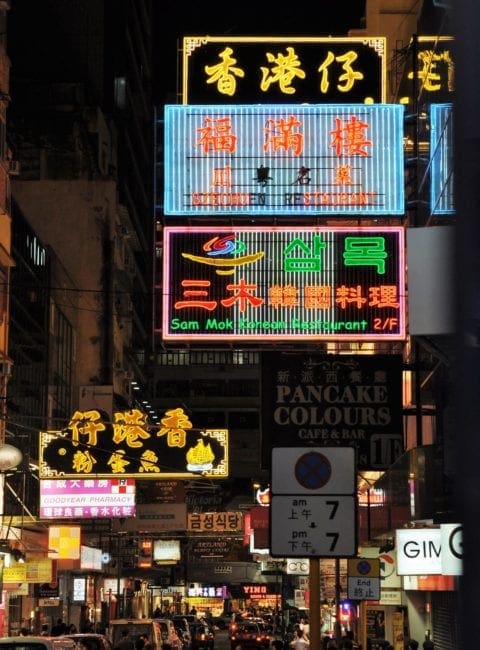 I've travelled twice through the New Territories. Once on the train, going through to Guangzhou and China. People are often surprised when they find out about this area. We tend to think of Hong Kong as just the island. In fact, the New Territories makes up 86.2% of Hong Kong's territory, and contains around half of the population of Hong Kong. The New Territories proper, is all the territory north of Kowloon (wetlands, parks and mountains), as well as the outlying islands. These include Lantau Island to the west (larger than Hong Kong Island and home to Hong Kong Disneyland theme park and the giant bronze Tian Tan Buddha) and Lamma Island (land of beaches) in the southwest.

And it was just this area, which the British leased from the Qing Chinese for 99 years. They owned Hong Kong and Kowloon, but chose to cede them back to China, at the same time, as it was deemed to be too difficult to govern them effectively on their own. 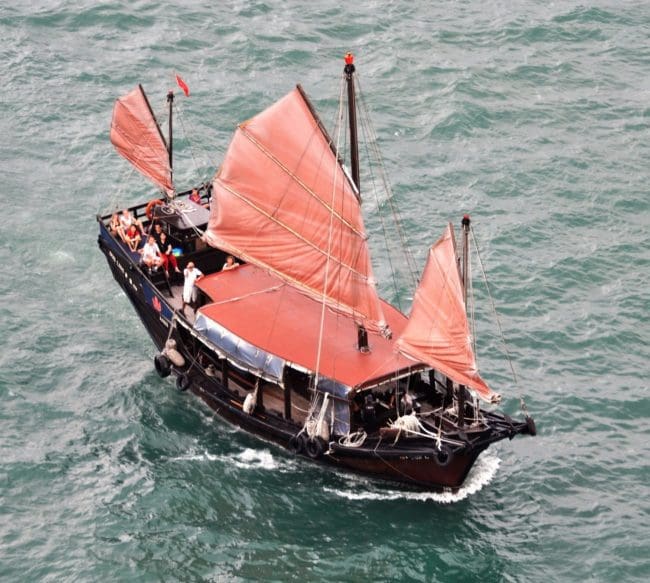 The first time I visit, with Raye, we take the the mass transit railway (MTR) as far as the border. It is crammed and the occupants stare silently. The carriages roll through endless grey high-rises and halt at a string of stations with names to match – Mong-Kok, Sha-Tin.

Out towards Fan-Ling (and ultimately China proper) urbanisation, it is definitely wet. The railway is lined with muddy duck farms. Too many jostling people and the crowds increase as the day wears on. I have Heard Hong Kong described as east meets west, but it's decidedly more east than west. And it’s very aggressive. Old Chinese ladies seem to take a delight in barging you deliberately out of the way. One sticks her tongue out at me, because I am in her way, when she is pushing a cart.

No time to venture out so far, this weekend. A final meal in a basic little Chinese restaurant, where we make the mistake of accidentally ordering enough for six. Then back to Manila.