Today’s driver from Delphi is efficient and on time. The car windows are all open and I’m directed firmly to the back seat, car sickness notwithstanding. ‘Covid rates are rising’. From here to Athens there are smaller mountains, the ridges topped with wind farms. The tall white mills suit the arid scrubby landscape better than other areas I’ve seen them where they are an intrusion. Though they’re not as pretty as the windmills of Mykonos.

Athens, the capital and largest city of Greece generates high expectations as a place to visit. It’s one of the world's oldest cities, with a recorded history spanning over 3,400 years. It is widely referred to as the cradle of western civilization and the birthplace of democracy. Ancient (classical) Athens was a powerful city-state, a centre for the arts, learning and philosophy. This heritage, coupled with an endless fascination for Greek mythology is a magnet for me (and the crowds).

Athens became the leading city of Ancient Greece in the first millennium BC. Legend has it that it was brought to prominence by Theseus of mythological fame (he fought the Minotaur), but he has sadly, never been proven to exist. By the fifth century BC Athens was the preeminent city state and this became known as the Golden Age of Athenian democracy. It was the time of playwrights Aeschylus, Sophocles and Euripides, historians Herodotus and Thucydides, the physician Hippocrates, the philosopher Socrates and Pericles, who promoted the arts and fostered democracy. And this was when Athens embarked on the ambitious building programme that saw the construction of the Acropolis and its temples. Eventually, Athens became too ambitious and was defeated, first by Sparta and then by Macedonia. Later, under Rome, Athens was given the status of a free city because of its widely admired schools.

According to Wikipedia, modern Athens is 'a cosmopolitan metropolis, central to economic, industrial, maritime, political and cultural life in Greece'. Though at first glance, from inside a car, it’s not hugely prepossessing: hills covered in beige three storey apartment blocks with balconies and plate glass shops underneath.

The Acropolis - Athens From The Top 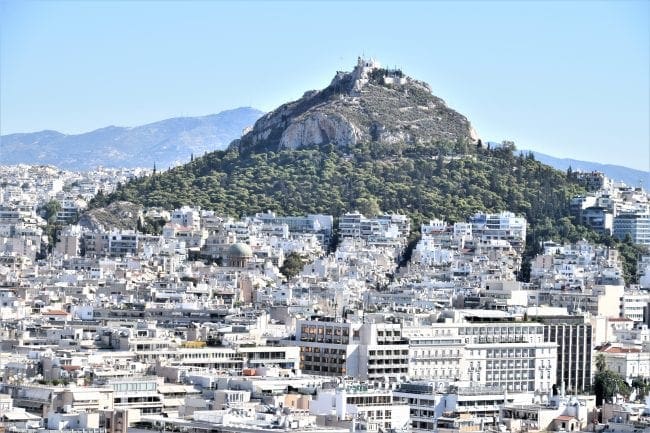 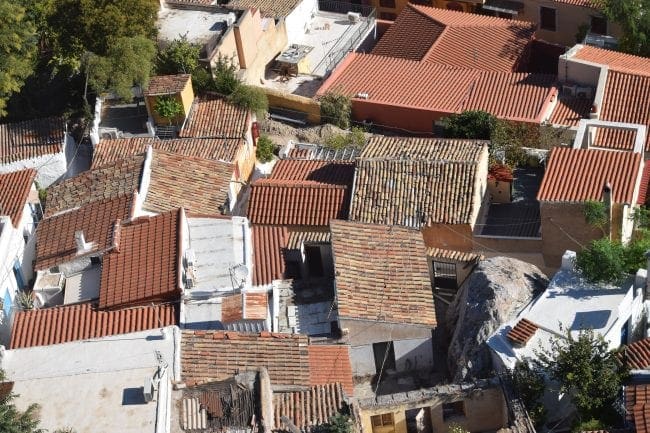 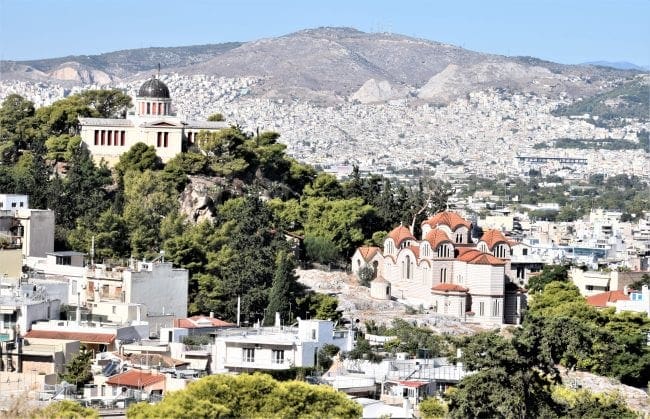 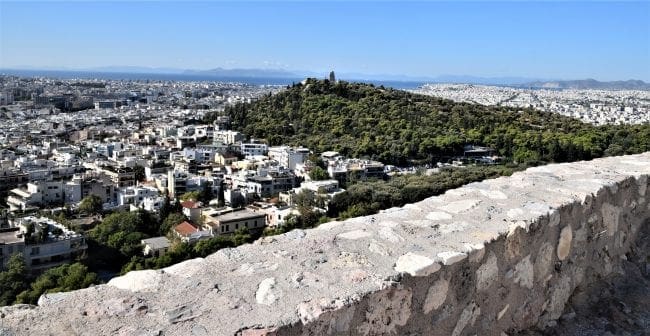 But once in the centre I glimpse the Acropolis , from the terrace of my hotel, and then I climb it and my opinion changes dramatically. From this marble covered flat topped hill (it’s very skiddy walking) Athens glitters. The whole of the city is spread out below. This is the awe inspiring stronghold which enabled Athens to become the centre of the Greek world. It helps of course that Athens is right in the centre of Greece and has direct access to the sea.

The buildings around the base of the Acropolis, looking from up top, are a fascinating melange of really old and fairly old. The red roofs of the lively Old Town Plaka district are juxtaposed against the ancient pillars of the numerous Roman and Greek sites and mega domed churches and mosques, Byzantine, Orthodox and Ottoman. After that excitement, my eyes wander outwards across the Attic basin – the spikey mound of Lycabettus, the smaller but still impressive Hill of the Muses, the whole bounded by four grandaddy mountains: Aigaleo, Parnitha, Pentelicus and Mount Hymettus. Beyond them, to the southwest, the port of Piraeus and the sparkling blue of the Saronic Gulf.

Athene and the Parthenon 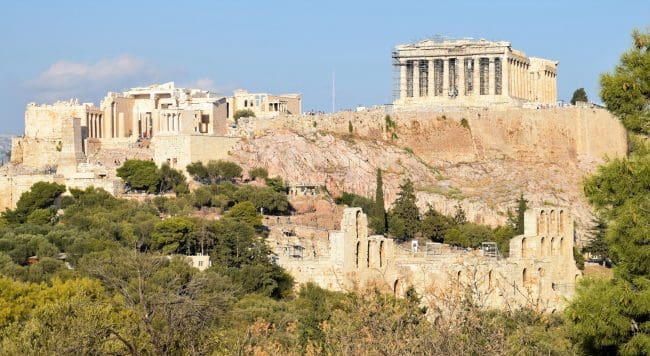 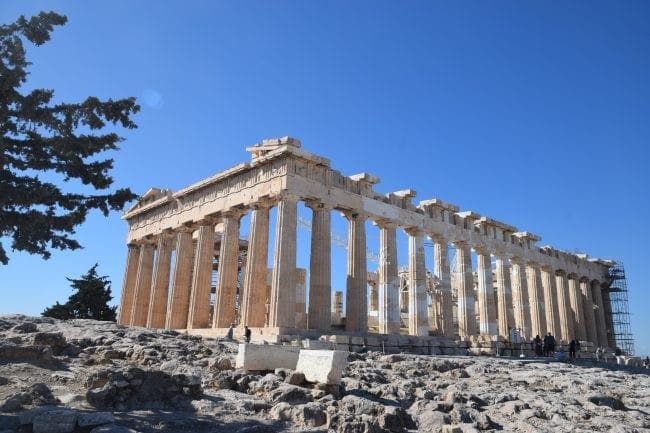 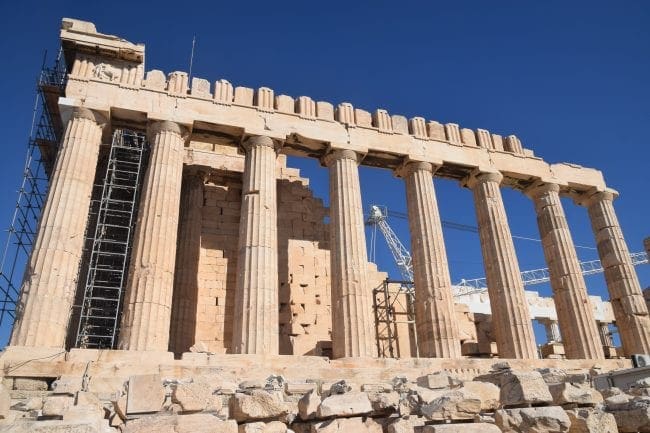 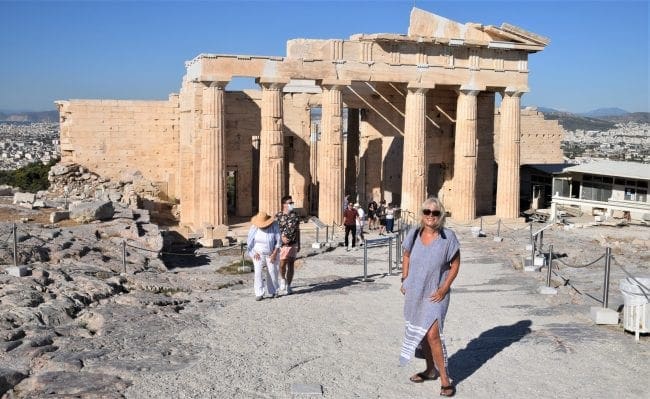 So, the monuments don’t steal the show from this angle at least. But they are totally glorious – even though they are all being renovated and almost, it seems, rebuilt. Pathways are blocked off, JCBs proliferate and views are obliterated. There are screeds on signs about the feat of getting the crane into place in the middle of the Parthenon.

There’s some debate about whether Athene gave her name to the city, or the city gave the name to the goddess. She apparently acquired the citizens’ patronage by offering them the olive tree. (Poseidon only offered horses) and most of the most famous temples up here are consequently dedicated to Athene. The Parthenon, the Nike, the Erechtheum (Erechtheus was the legendary founder of Athens ) are the three that are least damaged and most well-known. 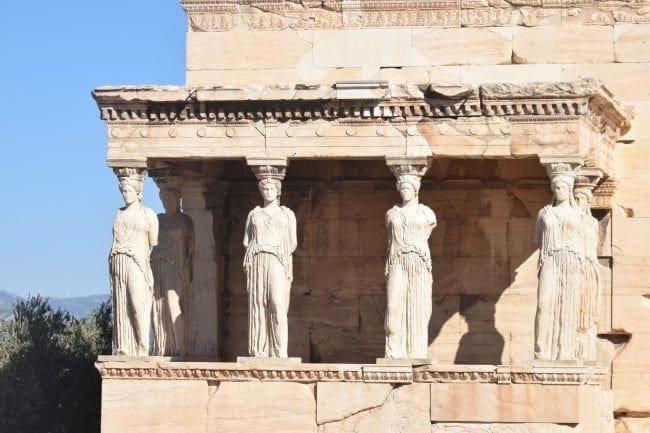 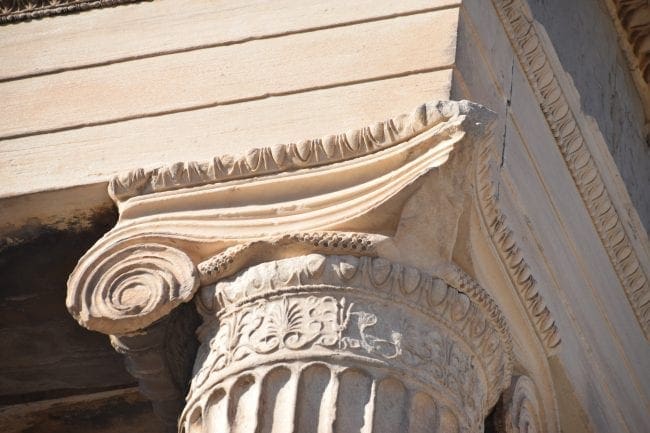 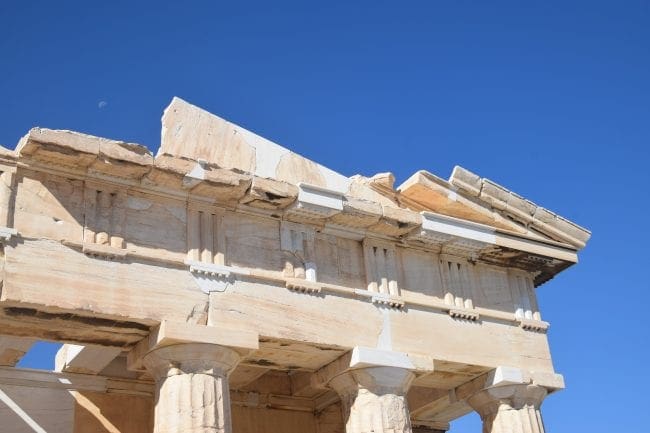 The caryatid ladies who hold up part of the roof of the Erechtheum are world renowned. These are only copies- the originals are in the relatively new and much lauded) Acropolis Museum, almost next to my hotel. along with all the interesting sculptures and findings. (I’m not even going to mention the Elgin Marbles). At a glance, it’s hard to tell how much else now is reconstruction.

The most complete temple is the Thesion, down below, in the ‘Ancient Agora’ next to the Hill of Mars. There are an astonishing array of other monuments to see from up here. The ancient Roman Agora with its gate and astronomical tower is clearly visible to the east of this even more ancient Ancient Agora. To the south, the Greek Dionysus Theatre and Roman Herod’s Odeon, both still utilised for performances. Further in the distance, the Temple of Zeus still has some huge pillars standing. 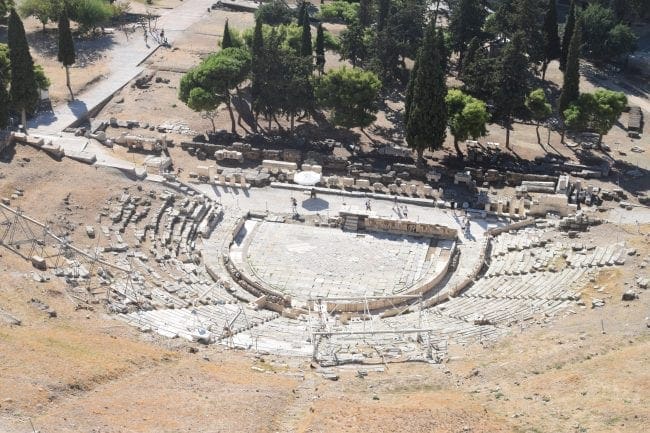 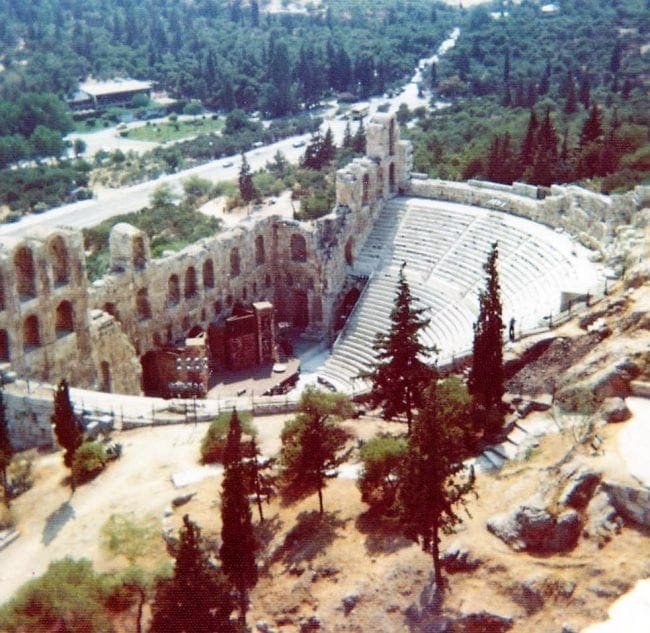 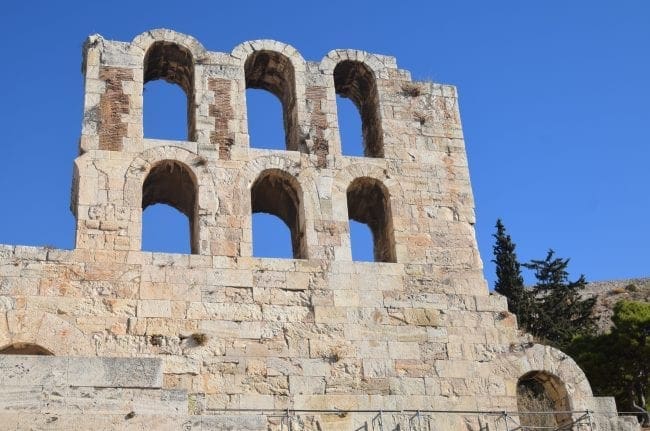 Athens From the Bottom

An incredible view, and in addition, bliss, no queues for tickets. Despite this, the sales lady still can’t summon up the energy to tell me that my guidebook is wrong, and my Acropolis ticket won’t let me into all the other sites, although you can buy a ticket that will allow this. It’s much better value than the one she sold me. And I don’t find out till I wander downhill and am refused entry to the ancient Ancient Agora. The lady on the Roman Agora gate I had already visited didn’t seem to mind. The agora was the marketplace and centre of town. One of the notable buildings here is The Tower of the Winds or the Horologion of Andronikos Kyrrhestes, an octagonal Pentelic marble clocktower. It's the world's first weather station.

The Hill of Muses

I discover an entirely different Athens on these lower slopes. Wide promenades, with street musicians to the south, beneath the theatres, slightly narrower walkways to the west, where you can wander free (hurrah)) and up the Hill of Muses (another skiddy track) to the Philopappos Monument (he was a prince) and what is said to have been Sophocles' prison in a dilapidated casemate. 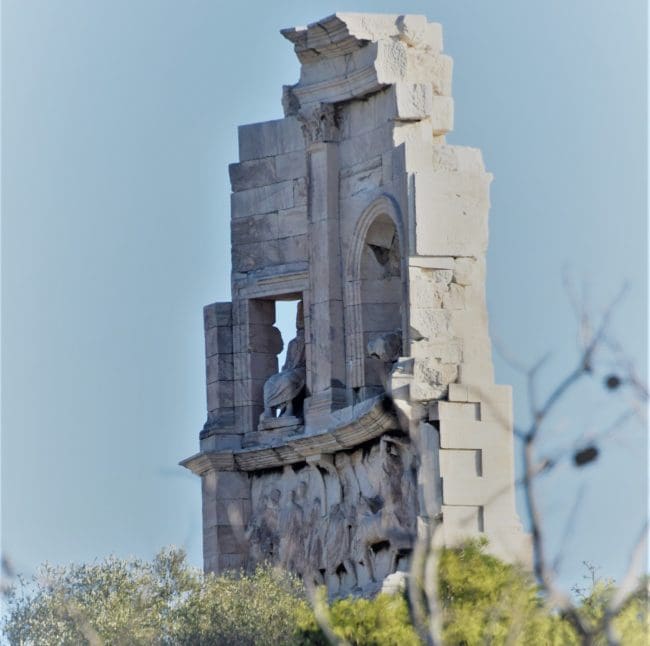 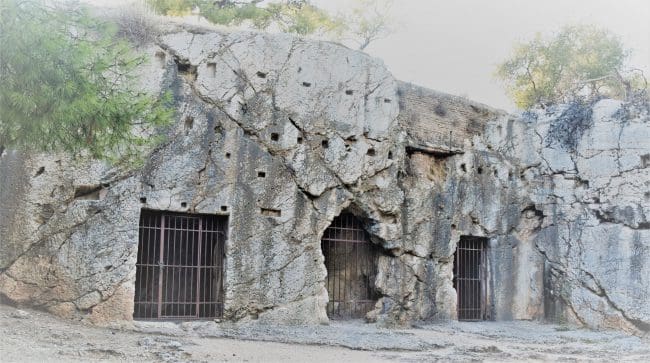 To the north, both agoras abut the Monastiraki area, which, with Plaka, most rewards my wandering. Monastiraki is an exceptionally pleasant stroll along side lines of pavement cafes and the tatty, but atmospheric flea market. I can testify to good ice cream and friendly service here.

Plaka is even more touristy, wide alleys packed with souvenir shops. Olive oil, olive oil soap, olive wood, sponges, wine and other Greek mementos. It’s also home to, what seems like thousands of tavernas, the nicest, in my opinion, tucked away under the leafy shade in the narrow alleys, winding up the lower slopes below the Acropolis. Nestling in-between, still more remains of the ancient world, Hadrian’s Library.... And when I get tired of columns there are the churches and cathedrals. There are some excellent, but touristy, fish restaurants around the cathedral square. 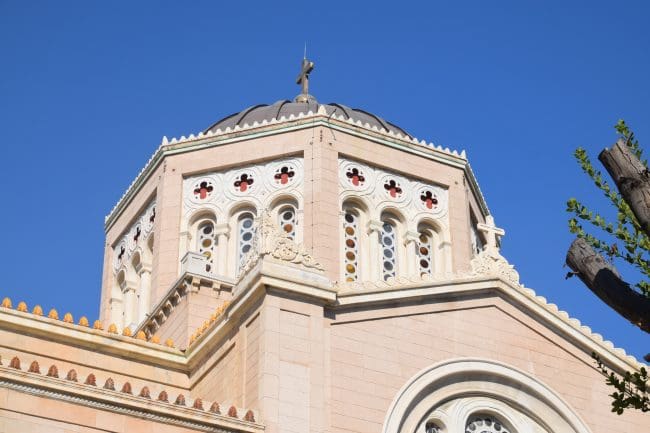 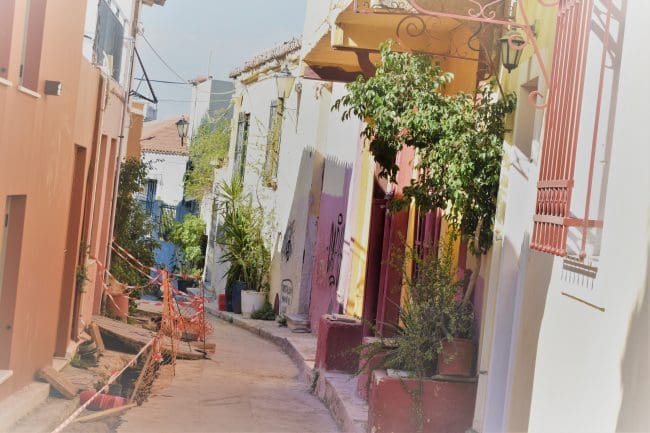 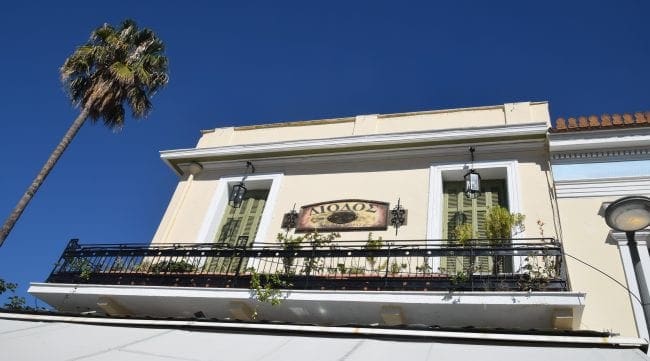 Then, the Olympeon, the Temple of Zeus (it is truly enormous), It must have been gargantuan when it was complete - which wasn't until Roman times. Emperor Hadrian paid for it to be finished in in the 2nd century AD. As I've discovered, he also ordered the construction of a library, still more temples and an aqueduct. The remains of many of these slightly less ancient buildings still stand in greater or lesser states of ruin.

Adjacent is Hadrian’s Arch, built to ‘welcome the city’s benefactor’. The entire monument is made of marble, from Mount Pentelikon. The inscription on the side facing the Acropolis says (in Greek): This is Athens, the ancient city of Theseus. On the other side, facing the Olympeon it reads: This is the city of Hadrian, and not of Theseus. 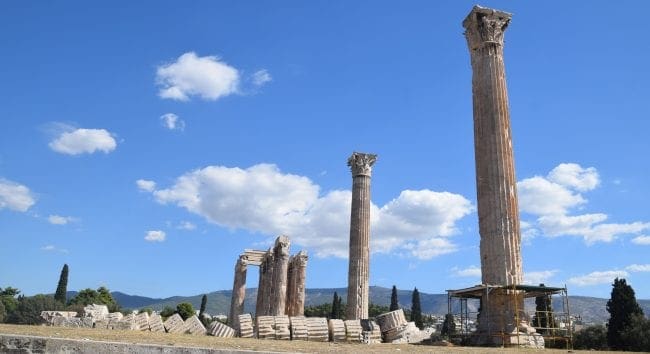 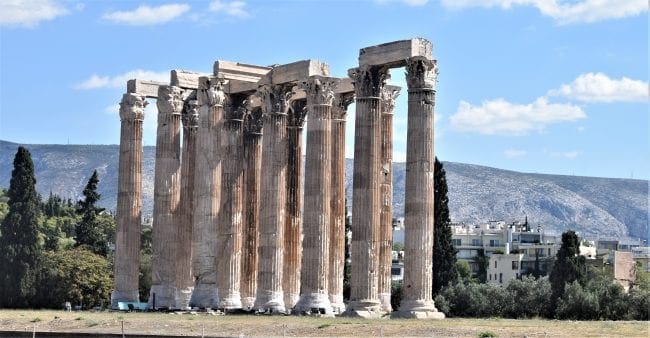 Next up, moving north again, the landmarks of the modern era, Syntagma Square, the central square of Athens with a (on -off) fountain and the tomb of the unknown Soldier. Fronting onto, it the Hellenic Parliament and then the National Garden (still more monuments). In the other direction, the stone stadium built in ancient style for the first of the modern-day Olympic Games in 1896. They used the stadium for the archery, when the games returned for the 2004 Summer Olympics.

The route back to my hotel takes me past the Choragic Monument of Lysicrates and two monuments to Byron. Lysicrates paid for the monument (the first in Corinthian style), to commemorate a choral competition that he sponsored. In the more ornate of the Byron monuments Greece is depicted in the form of a woman crowning Byron for his support in the war of Independence. 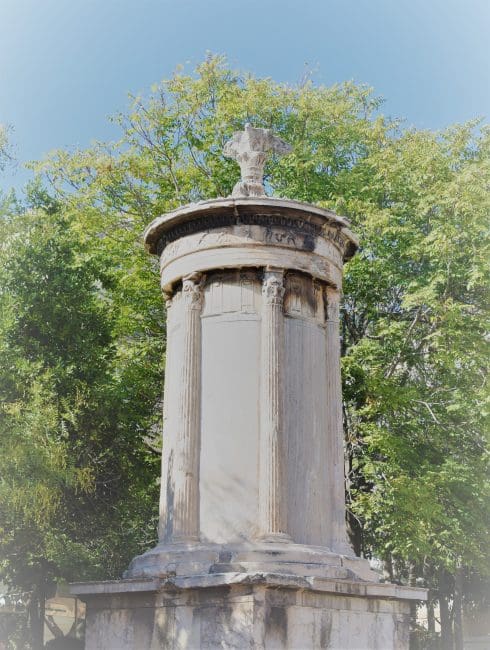 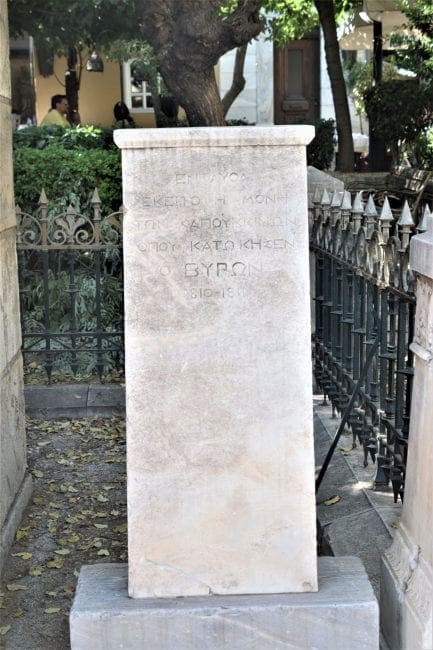 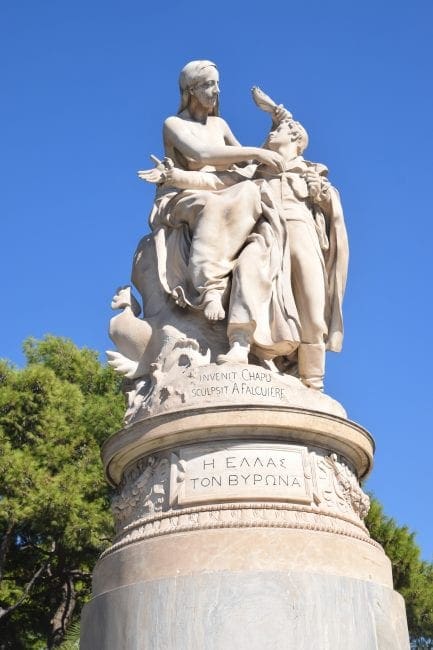 Now I’m utterly exhausted. And that’s before I’ve even got onto the museums - the National Archaeological Museum, featuring the world's largest collection of ancient Greek antiquities, the Acropolis Museum, the Museum of Cycladic Art, the Benaki Museum and the Byzantine and Christian Museums.

My Hotel in Athens

The Herodian couldn’t be better located. It has a view across the back of the Acropolis, (there’s a crane in the middle of course) creating a stunning outlook from the sun terrace (two Jacuzzis) and the restaurant. It’s most atmospheric at night when it’s lit up. The restaurant takes advantage of this and charges rather more than the distinctly average cocktails and pretentious food warrants. It’s also extremely Covid conscious. My suitcase is sprayed with disinfectant before I’m allowed up to my room, which is sadly dark and slightly poky. No view from in here or any mention of an upgrade – though they’re certainly not full. 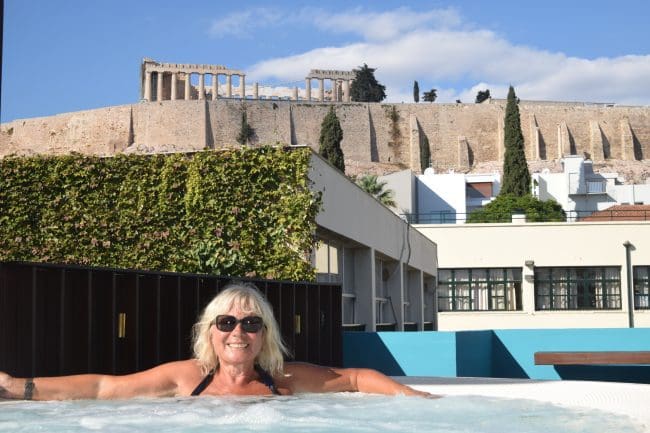 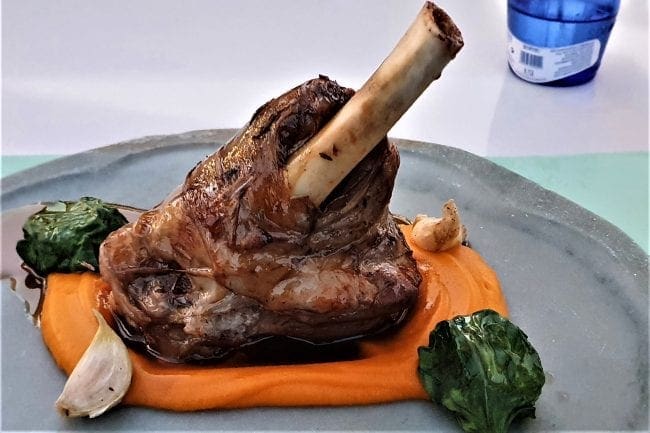 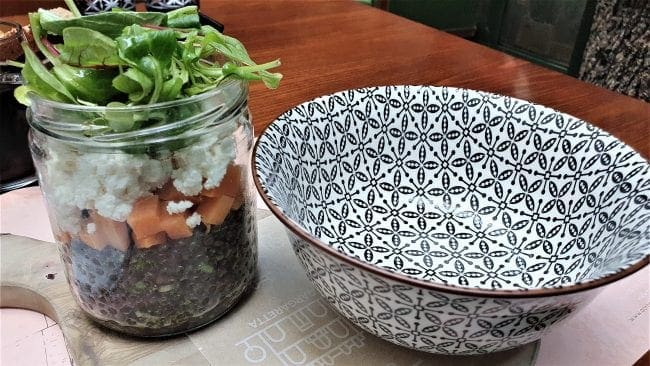 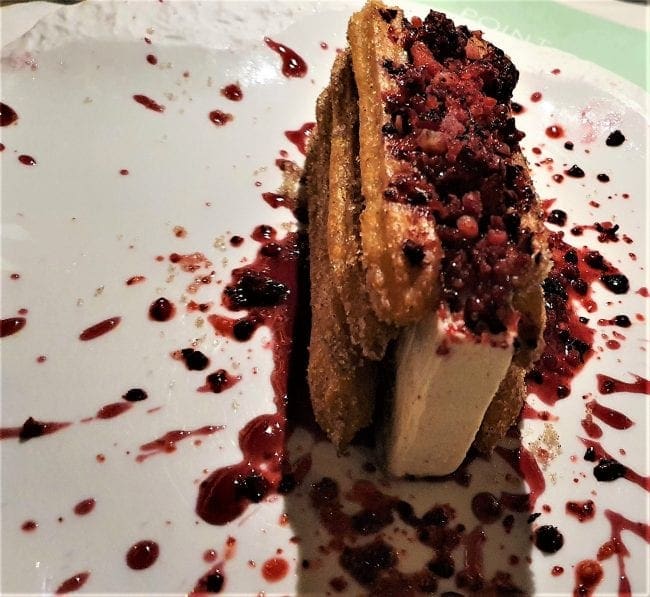 I’m going to be sorry to go home – I’ve even been considering extending my stay, but the English quarantine list keeps changing. The media suggests that they are going to put Greece on the list every Thursday and I keep having to check earlier flights home. BA have raised the price of their alter Friday flights to £700. This week five of the seven Greek islands were actually added to the safe list. Who knows what will happen? So reluctantly I’m heading back from the southernmost capital on the European mainland and the warmest major city in Europe.