Is Benin a Poor Country?

Benin has nearly 11 million people and around half live on less than a dollar a day, so it is among the world’s poorest countries. Unlike other West African countries, which export oil and cocoa, Benin's largest export is cotton. If the crop fails the results can be devastating. And cotton cultivation both leaches and takes over the land and makes life difficult for small landholders.

Benin used to be called Dahomey. The Dahomey Kingdom was known for its culture and traditions. Young boys were often apprenticed to older soldiers, and taught the kingdom's military customs until they were old enough to join the army. There was also an elite female soldier corps, formed from the king’s wives and dubbed the Dahomean Amazons by many Europeans. The kings of Dahomey worked with mainly Portuguese merchants to establish the slave trade from the end of the eighteenth century until well into the nineteenth century. As the trade lessened and the power of the kings weakened the French took over the area in 1892, later including included the land called French Dahomey within the larger French West Africa colonial region. Independence was granted in 1960 as the Republic of Dahomey

Is it Easy to Enter Benin?

I had to obtain an e- visa authorisation online. The form filling was a little trying- not all the links worked, but I mangaed it in the end. I got immediate authorisation. This was readily accepted at the border with Togo, though there were the usual interminable logbook entries to endure.

What are the Highlights of Benin? 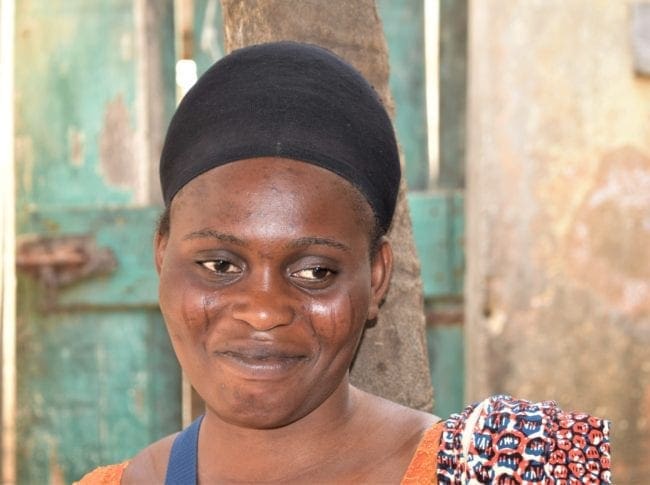 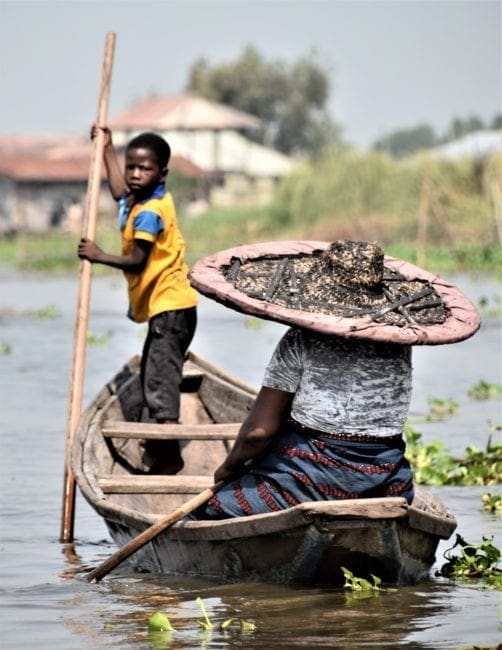 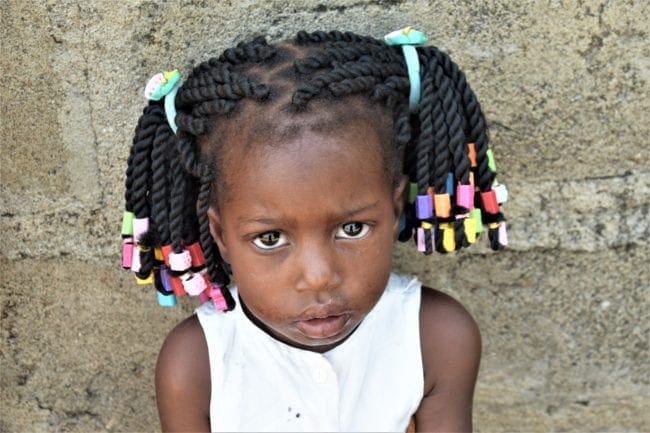 Is Benin a Safe Country?

Despite being located in a turbulent region, Benin is among Africa’s most stable democracies.

I felt perfectly safe travelling in the coastal areas. Far more caution is suggested on the northern borders, where there have been terrorist raids of late. At the time of my travel the FCO advises against all travel to the areas bordering Niger and Burkina Faso

Then it’s off to the airport. My ticket says I’m to be there by 1 pm, but I’m not allowed in for over half an hour until it’s under two hours before the flight and then I’m still not allowed to wait near the check in desks when I ask where the ASKY desk is. I’m yelled at and forced to sit well away. It’s not at all friendly. Niger next. Or not. After half an hour of no action I steel myself to creep back to the check in area. I notice the information desk is now open, so I ask the girl sitting there when to check in. ‘But your flight’s been cancelled,’ she says. ’It's a holiday and ASKY have decided not to work today’. There’s no flight until Friday. And that only goes as far as Lomé.

Getting Out of Benin

Several messages with Gabriele and conversation about all my bad luck.  I express regret that I didn’t buy any amulets at the fetish market and ask if it’s too late. ‘Buy 100’, he replies.

So, I’m now in a car heading back to Lomé where I’m assured there is a plane to Niamey at lunchtime tomorrow. I will have driven the width of Togo four times. At least I get to spend another night in that lovely boutique hotel. I’m even going to have the same meal.

I have a stomach upset the next morning.

But the flight goes.

Driving from the Slave Coast and Voodoo centres at Ouidah to Ganvie, “The Venice of Africa”, a group of villages floating in a lake just outside Cotonou; it is an astonishing spectacle, well worth a visit.

Ganvie - The Venice of Africa 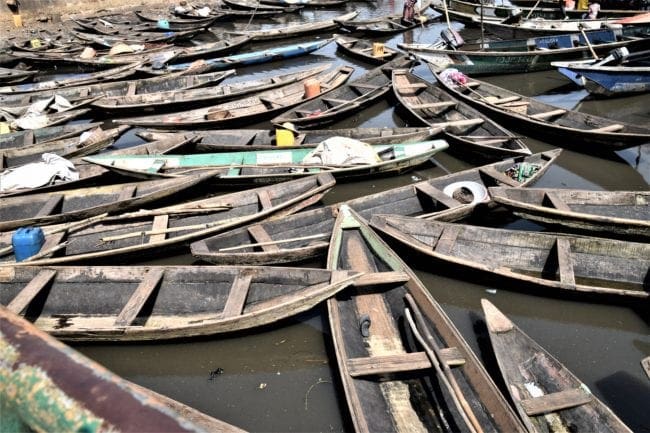 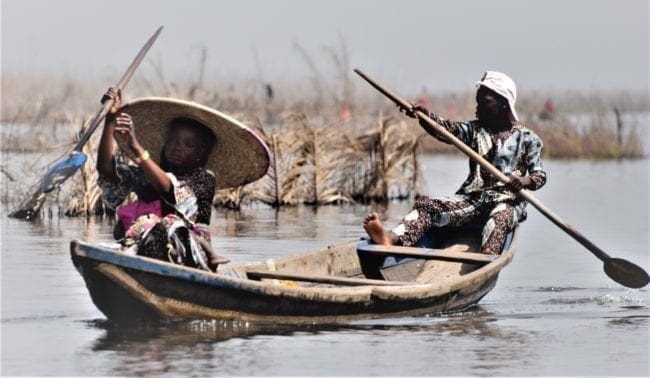 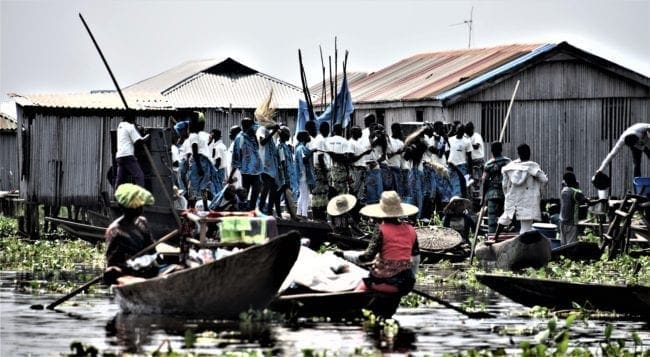 Cotonou, the de facto capital (the government buildings are here but parliament meets in Porto Novo), is situated on Lake Nokwe. A boat from a jetty with a large fish market, just outside Cotonou takes us through reed beds and fish farms to the stilt villages of Ganvie (Gan-vee-ay), which were established by people evading the slavers.

This Venice of Africa is a fascinating hotch potch of ethnicities, the locals wearing enormous elaborate sun hats, ferry their boats back and forth carrying fish to the stalls at the main dock, or barter goods at the floating market in the centre of town. There’s even a gushing fountain; boats are manoeuvred underneath the cascade, so that pots can be filed with water from a huge flexible pipe. It’s all done quietly and efficiently. Yet another astonishing spectacle. 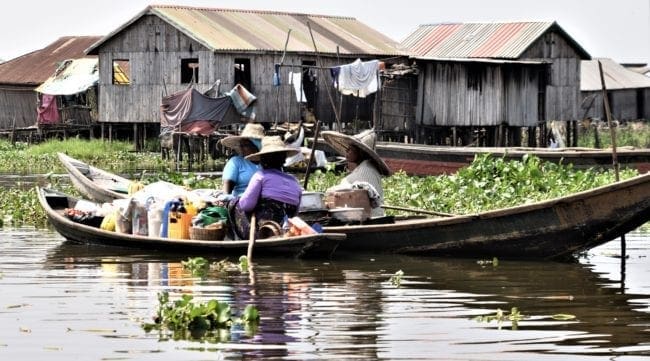 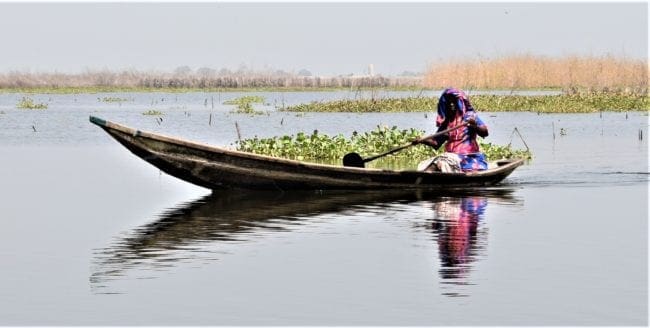 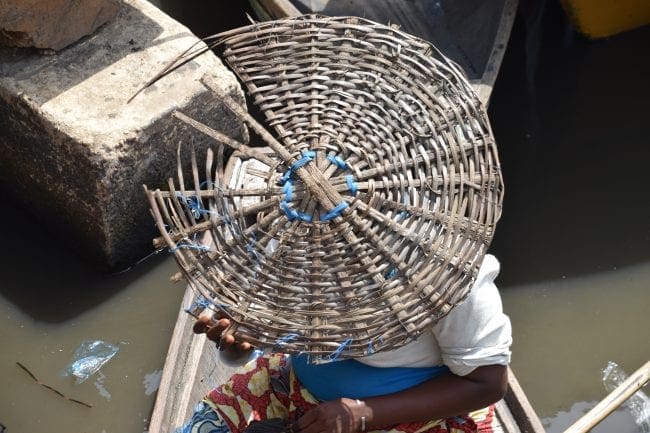 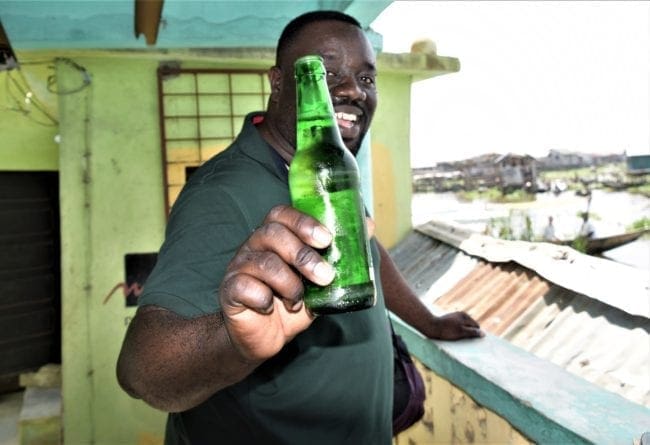 The road to Cotonou market curves up a raised section of road and is filled with yellow vested moto- taxi drivers. The market is a vast and colourful affair that sprawls over numerous streets and branching alleys. There are no separate sections, as in many markets and the stalls are a jumble of different types of produce: vegetables, fish, baskets, red cheeses, dried prawns and live goats. Carts jostle to pass in the cramped spaces and the stall holders grimace if they see the camera. 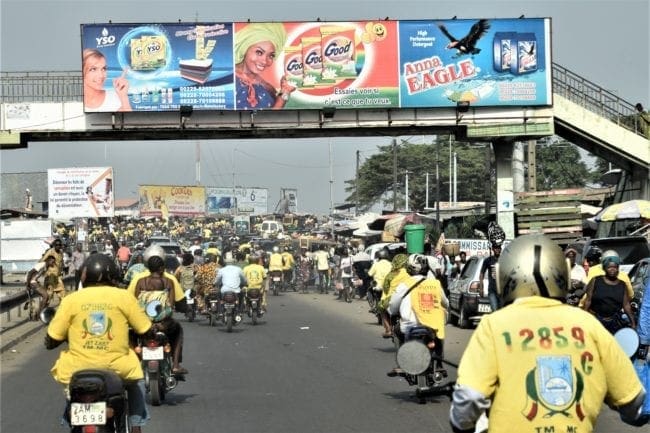 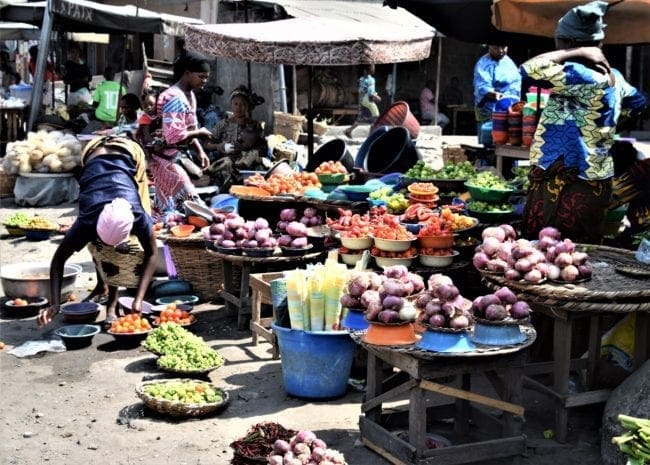 As it’s New Year’s Eve my charismatic guide Noah has taken me out to dinner at a bar. He tells me that his father had two wives; his mother was the first and had four children. The second had six. Polygamy is still very common in rural areas for West Africa, less so in the cities. Having many children is a means of securing free labour for agriculture. Noah’s siblings are all well-educated and in relatively well-paid jobs, several are teachers. His story is more interesting than the bar, which is not exactly lively, though there is (eventually) live music. The whole city seems very quiet. A few fireworks light up the sky at midnight.

Next stop, Niger, I hope