Tulips in Holland has been on the bucket list for a long time, so we load up the car and set off for Delft. I have to be careful not to confuse Holland and the Netherlands. The Netherlands is a country in Europe, which is part of the Kingdom of the Netherlands (with Aruba, Curacao and Sint Maarten). It was a founding member of the European Union and they use the Euro as currency. Netherlands literally means "lower countries". It's very flat, with over a quarter reclaimed land called polders; it all lies below sea level. You must remember the story we were told at school about the little boy who kept his finger in the hole to save the dyke?[

Holland is strictly the province of Holland, in the Netherlands, which has been divided into north and south. However, the two words are interchangeable in English and the Netherlands is actually called Holland in some languages. Whilst I'm on language the word Dutch is more complicated. It derives from the old German for 'German peoples' - similar to Deutsch and the Dutch were seen as West German peoples.

In any case, we are definitely visiting Holland, the western side of the country. It's so small that on the map everywhere seems reasonably close. Though there’s more traffic than we expected. It’s densely populated and there are festivals on (I think it’s the queen’s birthday). And there are the tulips. As usual Tina takes the wheel of my trusty mini and I navigate. The weather is a little perverse. So the two most famous sets of windmills are admired through a brooding misty haze, while the tulips at Keukenhof Park and around bask in glorious sunshine. It’s the right way round for the photographs. 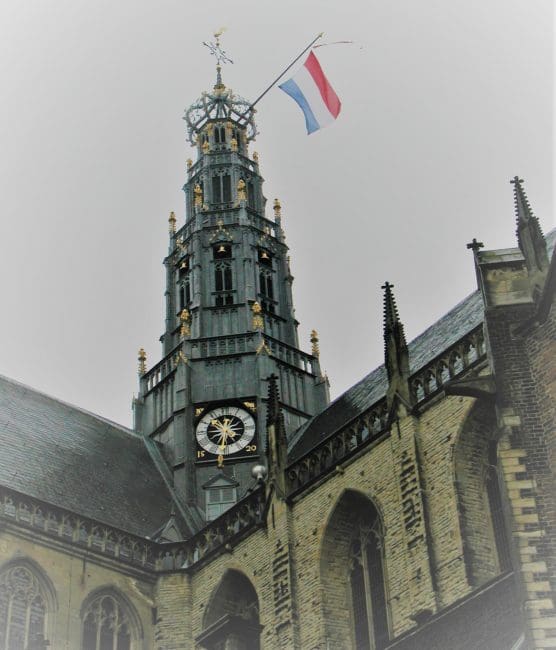 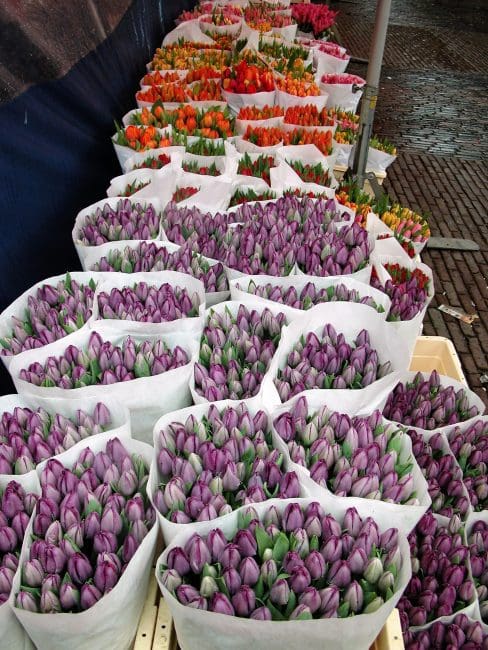 First, north to Aalsmeer, bypassing the nominal capital, Amsterdam. It's a gorgeous city, with its canals, galleries and red light district, but I went there on my last visit.

Aalsmeer is the flower capital of the world. The largest flower auction in the world is based here, along with numerous nurseries an experimental station for floriculture and a huge flower market.

Next, we reconnoitre Haarlem and wonder at the cobbled streets and gabled houses with their distinctive curves, There are art museums and hofjes (almshouses built around leafy courtyards), stacks of spherical cheeses and cakes in dinky little tea shops. Haarlem was once a major North Sea trading port surrounded by a defensive walls. It's the capital of North Holland province and its nickname is Bloemenstad, because it is in the centre of the bulb fields. 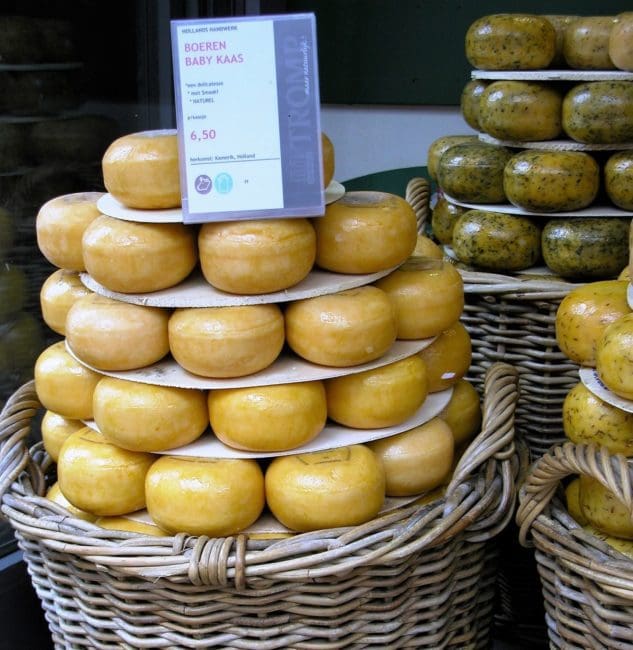 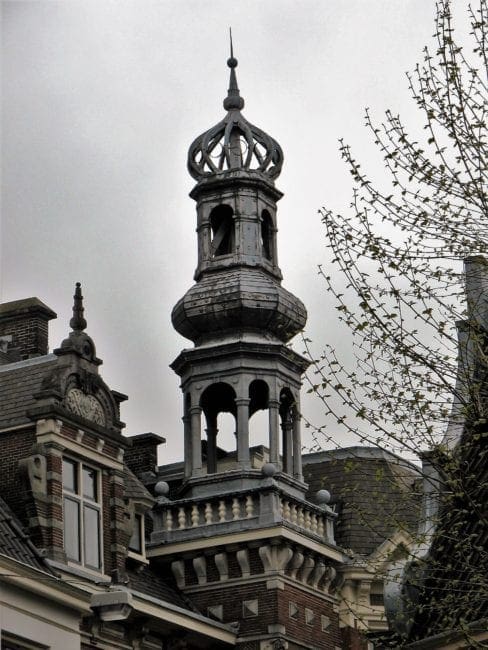 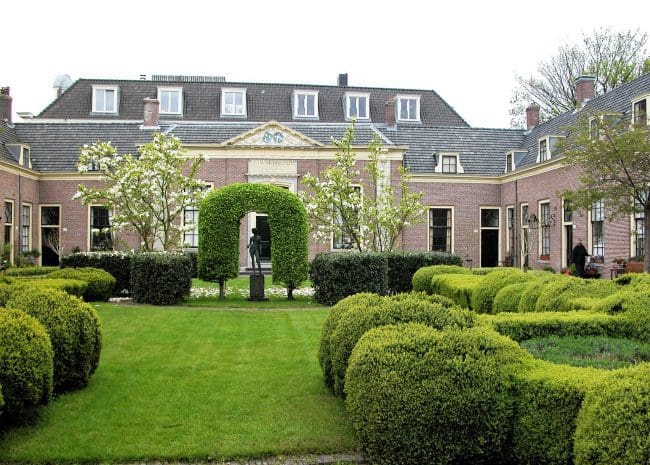 The nineteen splendid windmills of Kinderdijk, In South Holland, have been declared UNESCO World Heritage. This is the largest collection of old mills (eighteenth century) in the country.

The windmills at the Zaanse Schans are restored and mostly relocated, set in a kind of living museum with authentic Dutch houses and shops (of course). 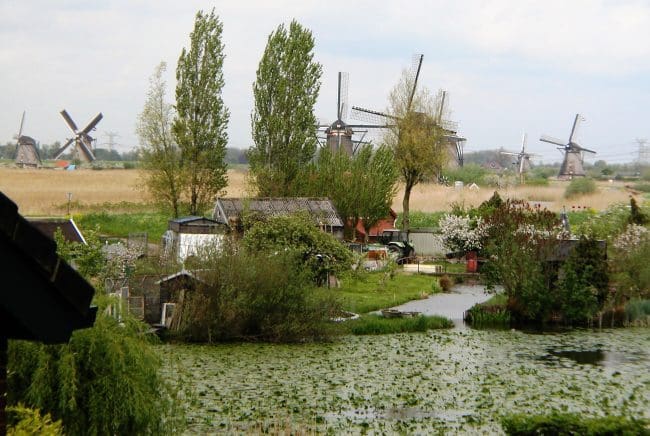 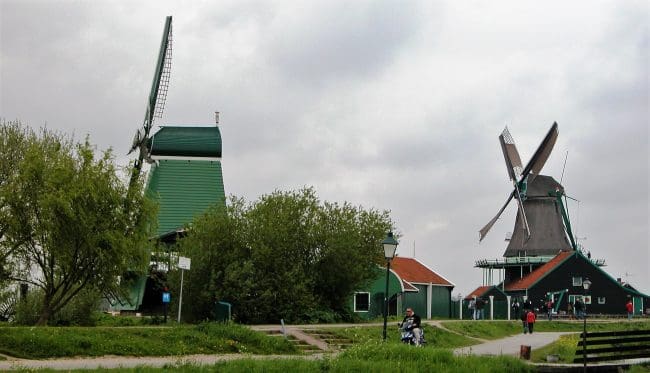 Tulips are synonymous with Amsterdam/Holland, but they actually originated in Turkey. Carolus Clusius, a Dutch botanist brought some back form Constantinople, designed a tulip garden, wrote a book and generally promoted his new love heavily. He started a craze, described in books like Tulip Fever.

Tulip mania reached its peak in 1637. with tulips being seen as investments and the price of rare bulbs rising astronomically. The market crashed and then picked up again. The Dutch are still the world’s main producer of the flower, up to three billion bulbs per year. 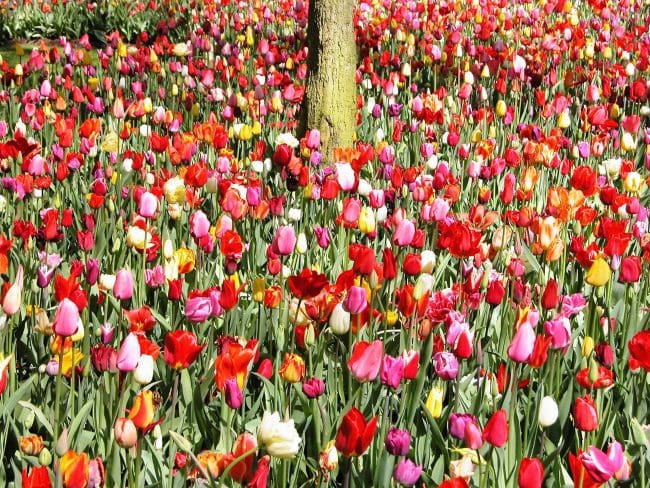 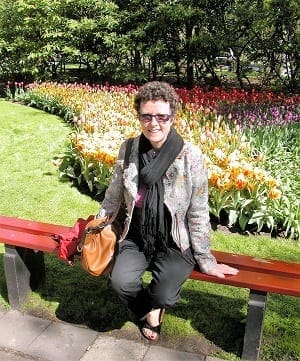 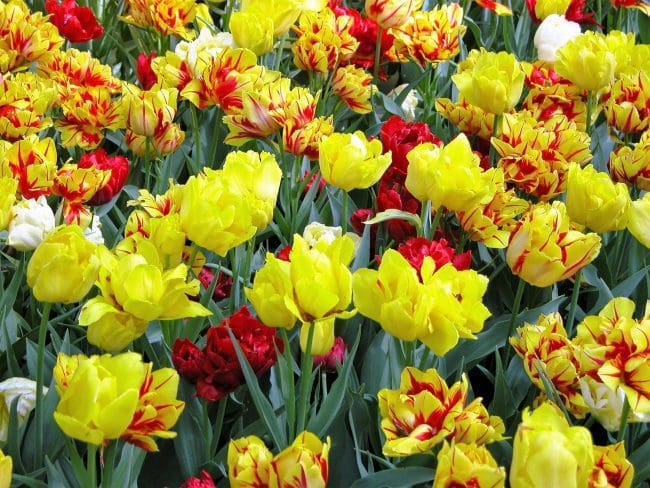 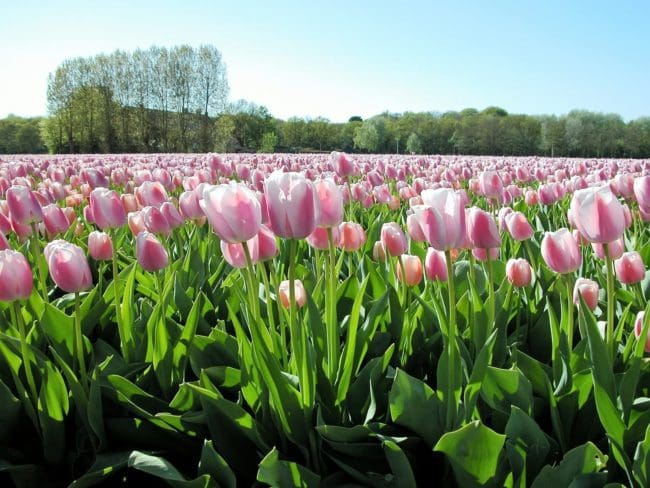 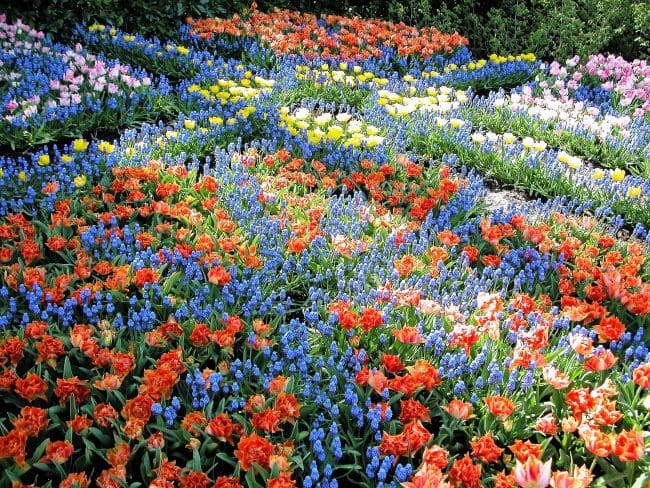 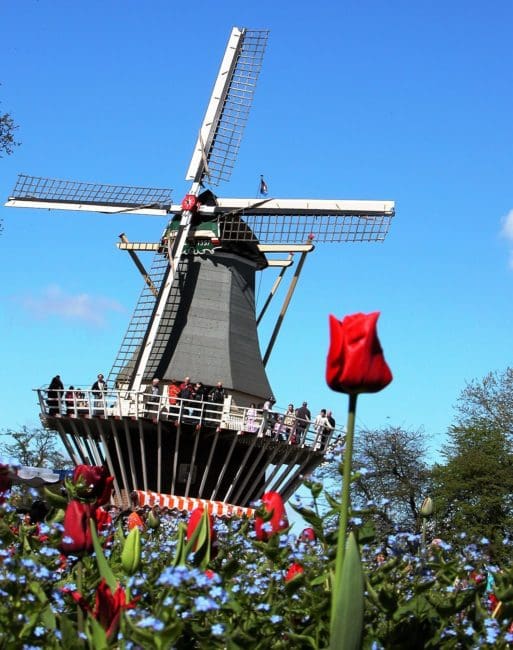 Keukenhof, in South Holland,(also known as the Garden of Europe), is one of the world's largest flower gardens. Seven million flower bulbs are planted in the gardens annually. The space began as a kitchen garden for a castle. It was then redesigned as an English style garden and finally opened to the public in 1950, to showcase the bulbs of Holland.

The tulips (and other bulbs) live up to expectation, and the park is lovely, if crowded, but these are gardens. Though there aren’t as many fields in flower as I had hoped. Maybe we just don’t’ know where to look? 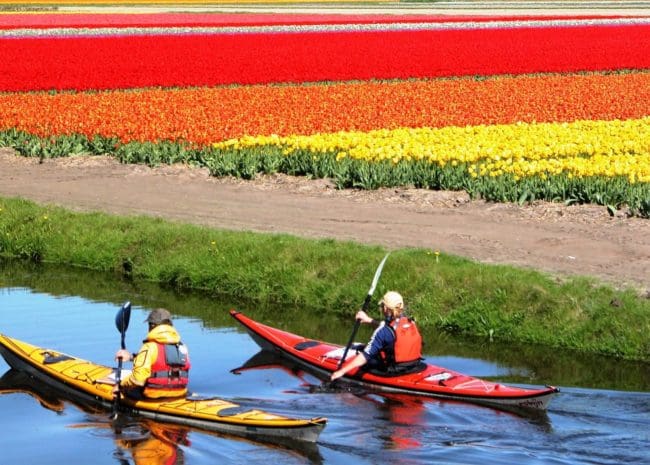 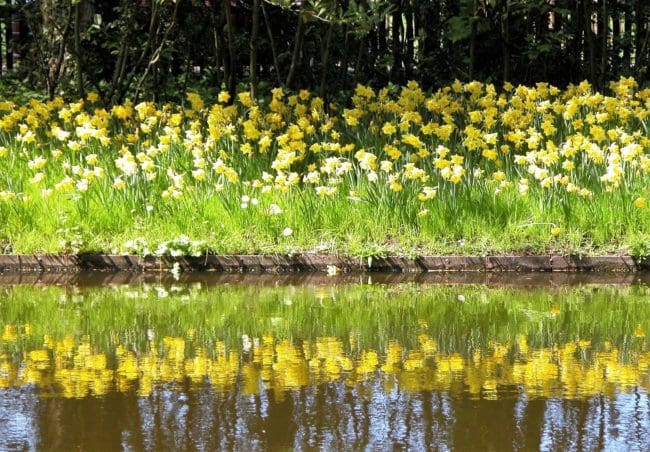 The old university town (and former capital) of Delft is possibly even more interesting as it is the home of the blue and white Delftware pottery and tiles (naturally) and has rings of canals with attendant little white bridges. Though my umbrella lands in the bottom of one canal after an unexpected gale. Delft was also the home of Vermeer and probably more importantly, the House of Orange. The New Church is full of their tombs. There's also the Old Church.The Oostpoort (Eastern gate), built around 1400. It's the only remaining gate of the old city walls.

There’s a music festival on and the market square is a hive of activity, mostly related to beer and the wearing of orange T shirts. Beer features a lot in Holland. The supermarkets are piled high with it and I notice there’s very little wine or spirit on offer. The lottery of choosing a hotel has worked to our advantage on this occasion. Our hotel is great - it’s a converted warehouse oozing character beams, brickwork and tasty breakfast. 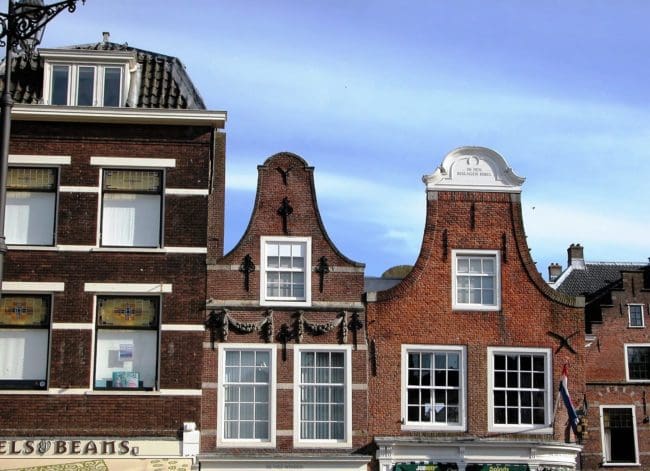 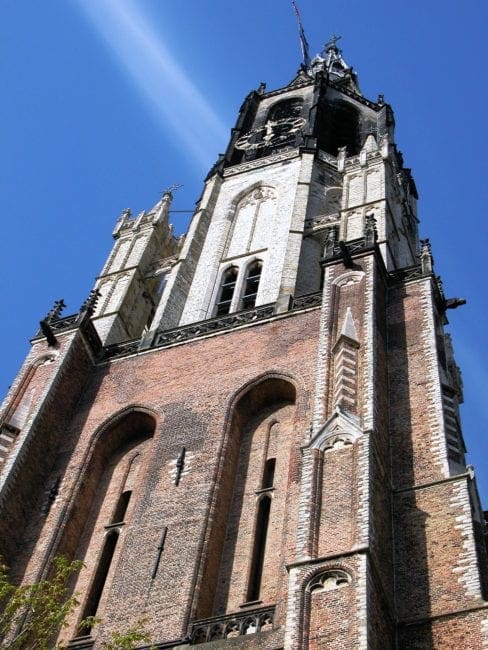 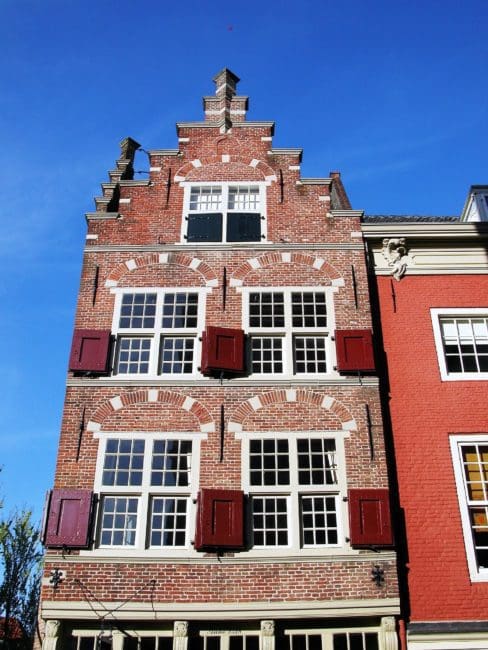 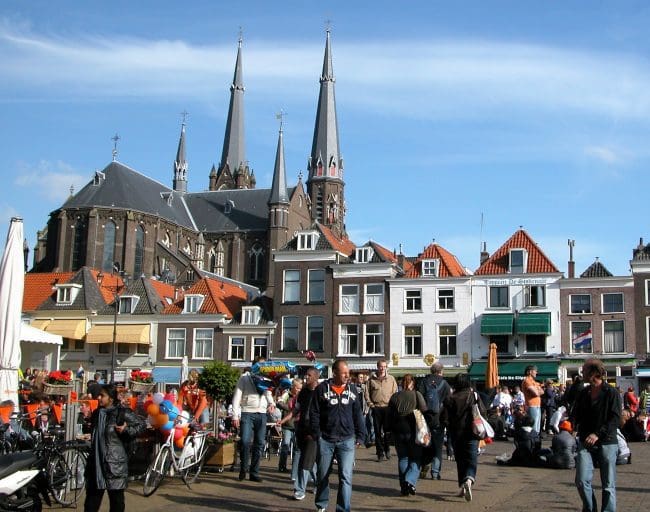 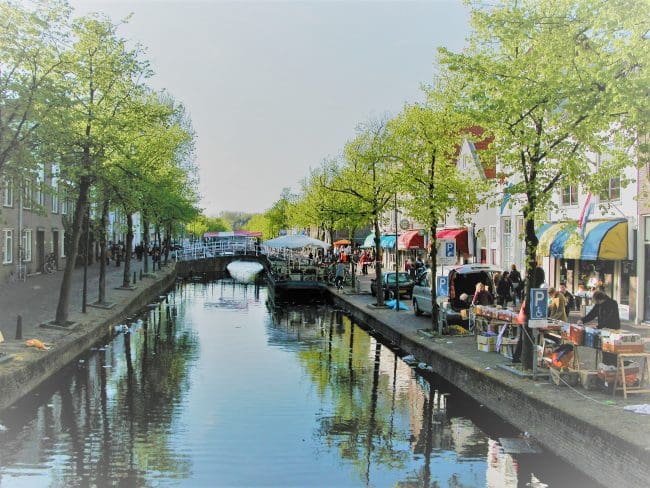 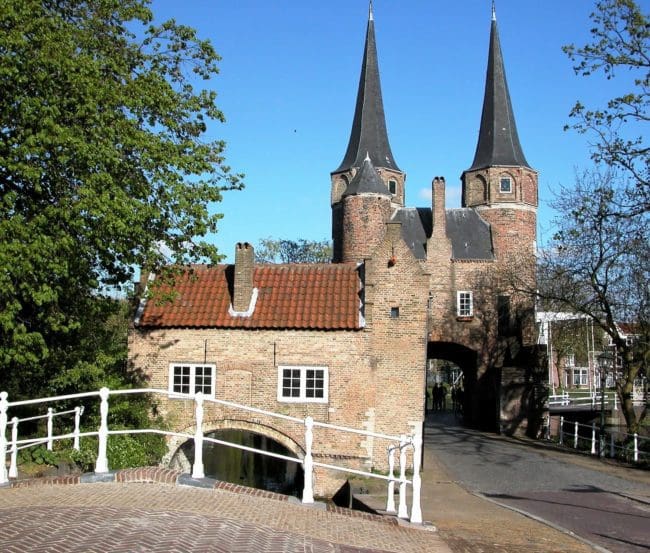 And after that the deluge begins. It’s bad enough to contemplate building an ark. We rule out Rotterdam, the biggest port in Europe, which has mixed reviews (unless you’re into nightclubs), and opt to wade round The Hague (Den Haag), with its solid civic buildings (it’s the seat of Parliament but not the national capital, which is Amsterdam). Binnenhof is home to an eclectic mx of architecture, most notably the Dutch Houses of Parliament and the Prime Minister's office. Not much looks wildly interesting in the low light, but the Knights Hall passes muster.

The Mauritshuis is home of the the Royal Cabinet of Paintings' 854 objects, mostly Dutch Golden Age paintings. The collection contains works by Vermeer, Frans Hals, Hans Holbein the Younger, and others. There’s a long queue (in the rain) for this one - Dutch Master painter Johannes Vermeer (of Girl with a Pearl Earring fame) is actually buried in the medieval Oude Kerk (old church) at Delft. The painting is here though. 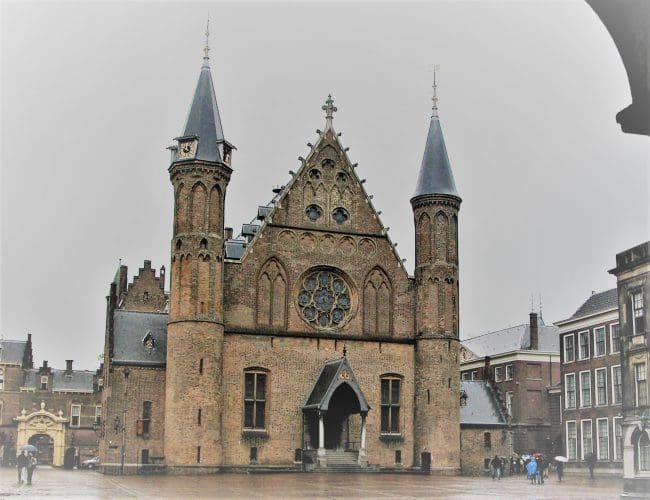 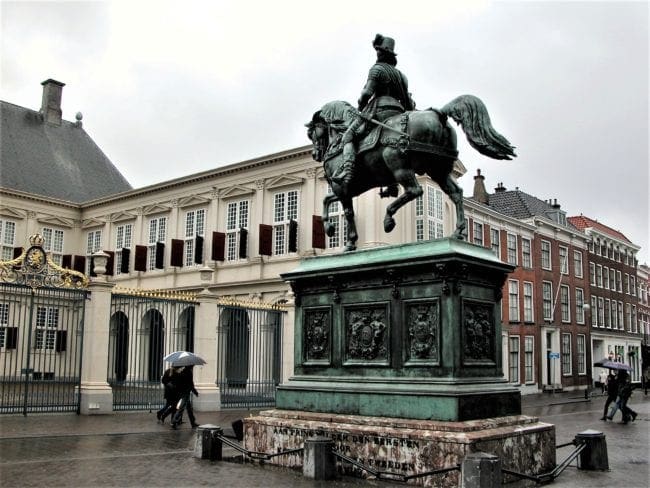 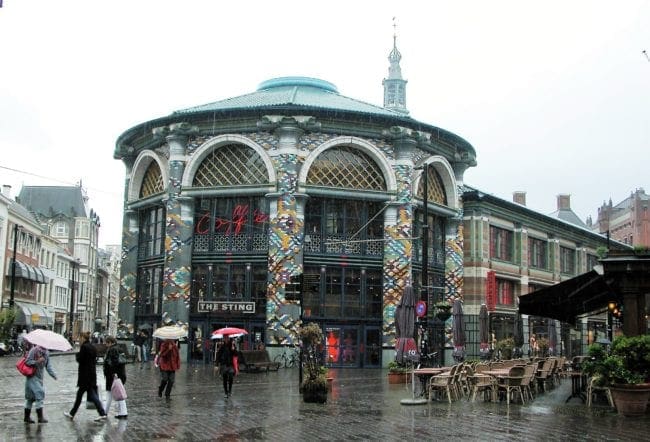 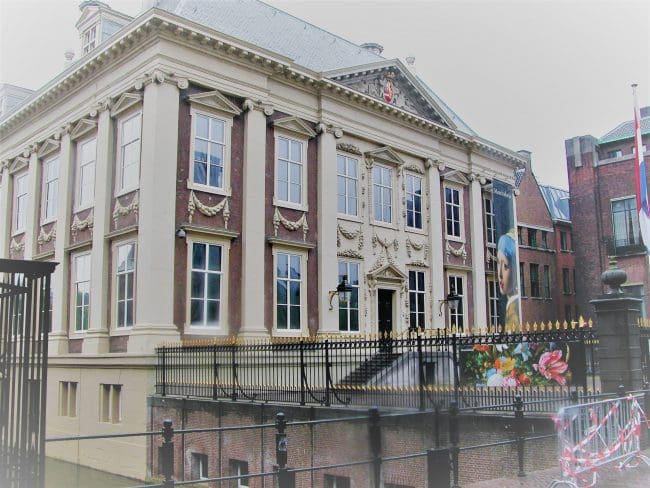 Possibly more exciting is the Escher Gallery with works on display in a former palace of the Royal Family. Maurits Cornelis Escher was a Dutch artist who made mathematically inspired woodcuts, lithographs, and mezzotints. Sadly, he didn't command much attention until he passed the age of 70, though most folk nowadays have heard of his puzzling works and tessellations.

The exhibition is an eclectic mix of mind boggling graphics and 3-D oddities and worth it, even though we’re sodden. 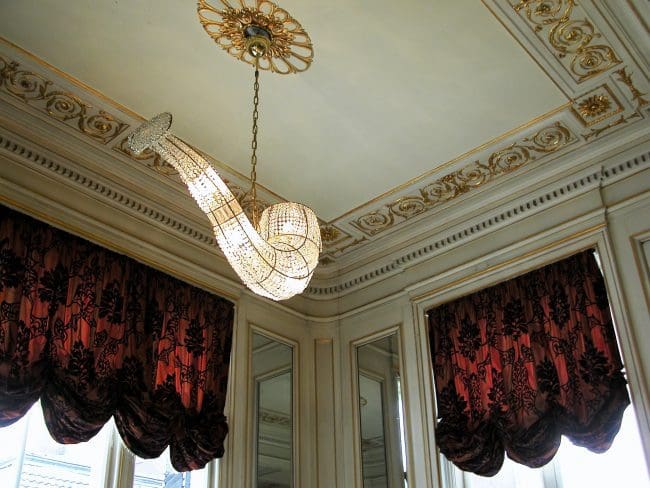 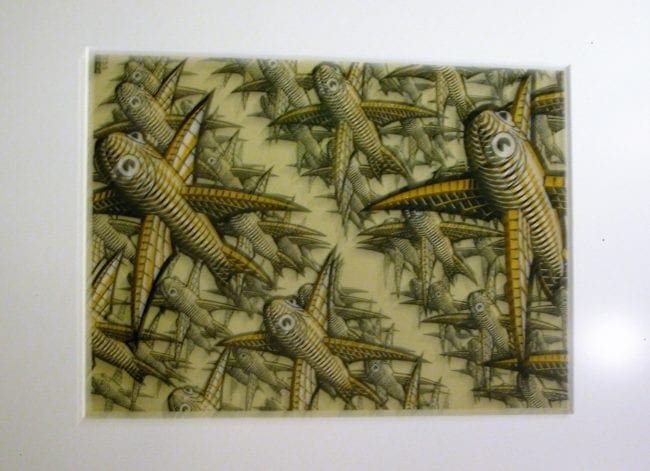