It’s a late start from Lubango today. The boat carrying diesel hasn’t arrived from the northern oilfields, in Cabinda, and there are long queues for fuel. West through the hills we visited  yesterday, to what Wilson tells me is the second most beautiful mountain pass in the world, Serra de Leba. Number One is in China he says. I shall have to look it up.

Before descending, we stop to admire the ribbons of hairpin bends cascading neatly down the escarpment. It’s another great view. Guide, Wilson’s uncle also happens to own the restaurant overlooking the pass, so a very early lunch is called for. I’m thinking it must be a tranquil place to live, but maybe not. Uncle is already on the beer. 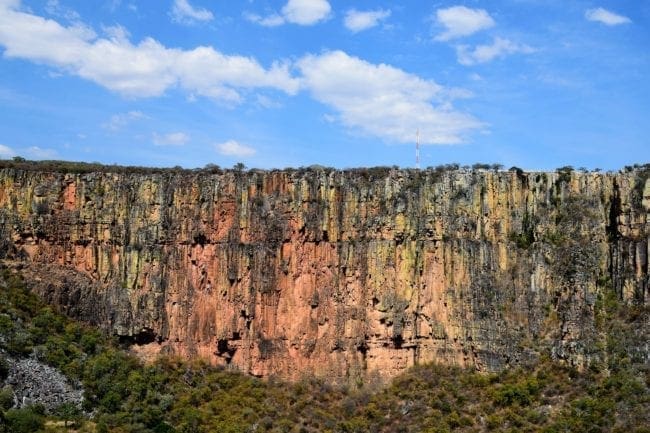 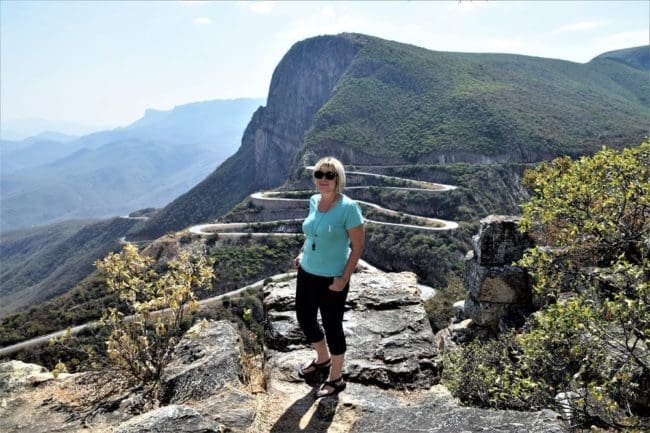 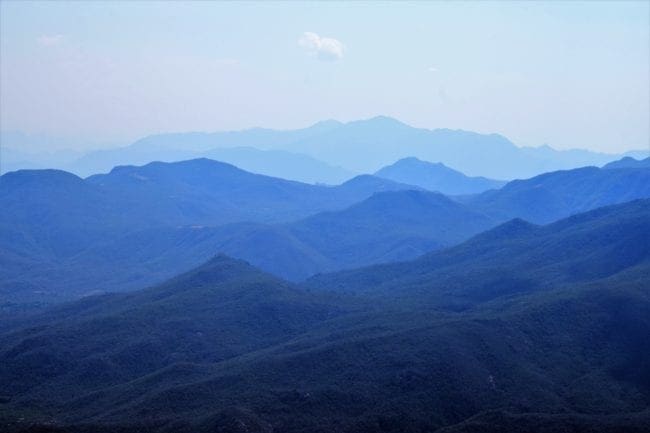 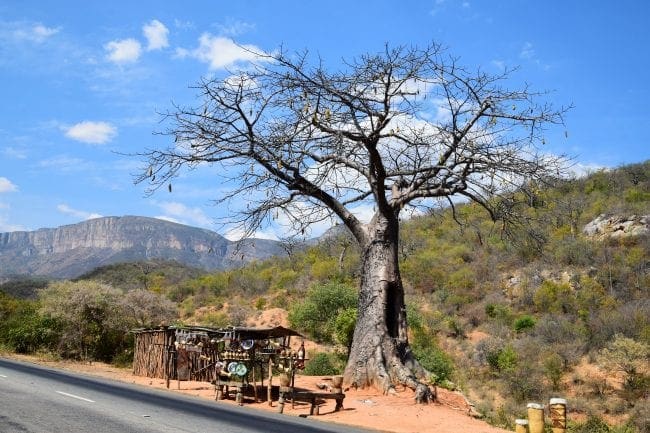 The ride down is scenic but not exhilarating, which is fine by me. Our road takes us past towering cliffs, through more craggy blue mountains and patches of baobabs. Beyond the mountains the Namibe Desert and golden boulder strewn flat lands, followed by equally spectacular dirty yellow mesas, as we drop down to the coast and Namibe City. Well, everyone calls It Namibe, but according to Wikipedia it changed its name to Moçâmedes in 2016.

I’m never sure if Wilson is lost or giving me a city tour. We drive very slowly down every street in Namibe, which has a faded slightly Caribbean flavour and yellow and pink Chinese hotels identical to the garish constructions in Lubango. There’s a fishing harbour with a flotilla of small blue boats bobbing and the people are unloading today’s catch direct to the market behind the dock.

Dinner in a fish restaurant further along the quay. Buttery clams, perfectly cooked lobster and a very good caipirinha. Things are definitely looking up on the food front.

My hotel is on a cliff overlooking the sea. It’s very smart and my room has a balcony facing the water, but appearances aren’t everything. Three out of the four light bulbs in my room don’t work. Neither does the phone, so I can’t summon help. This is still Africa. 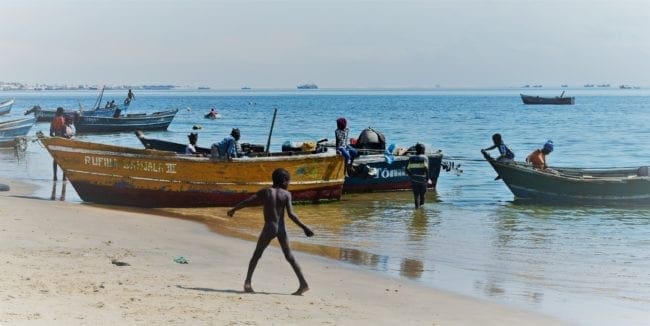 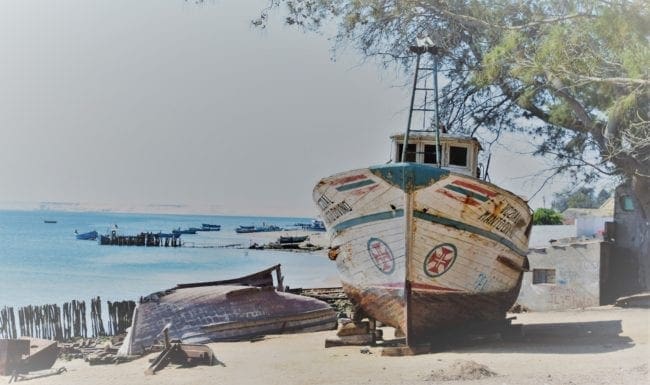 South through the coastal desert to Tombua, a harbour town set amidst pale sand dunes. I’m lulled into thinking I’m in Europe for a while, the roads are so well maintained, with No Overtaking signs and neat petrol stations along the route. Angola is not what I expected. Media coverage of the long wars has tainted my views and it’s not chaotic, or at all hostile. It's definitely, however, a country of two faces. This fishing port,  is very much back to developing world, with the salting and drying of fish, mainly sardines, on the sand. Women wearing spotted headscarves are smashing rock salt with heavy sticks, whilst others gut the catch wielding huge knives. There’s a further flurry of activity around the boats, mainly involving the men, while children scurry into the water to help - or hinder. The whole is backed by some very grubby brick dwellings. The town itself can be summed up as uninteresting and it boasts yet another pair of those hideous Chinese hotels. 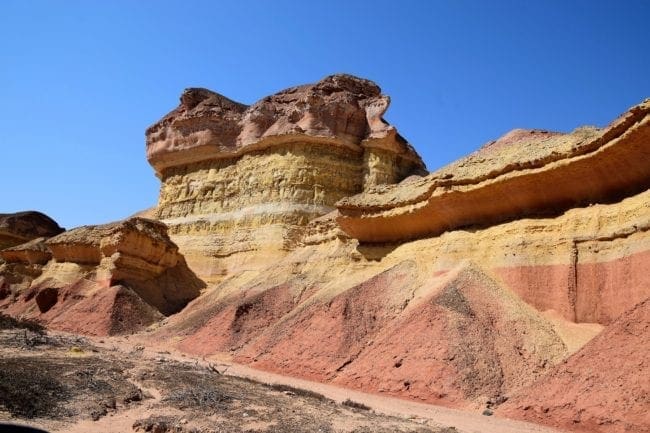 But first Wilson says he has a surprise. We head up a desert track across a small oasis to arrive at some epic scenery. I’ve seen some amazing rock formations this last year, in Djibouti, Chile and Bolivia especially, but this well off the beaten track spot might well trump them all. The pastel greens, yellows, reds and pinks are superior to those in any painted desert I’ve previously seen. There are a plethora of huge golden buttes and the cliffs themselves are arranged into an endless formation of ancient cities and temples. It could be the treasury at Petra, adjacent to a maharajah’s palace, followed by  a cathedral or two. Wilson says some Brazilians have been here making a film called The Promised Land. It would definitely make a great movie set. I would go for a remake of Dune, I think. 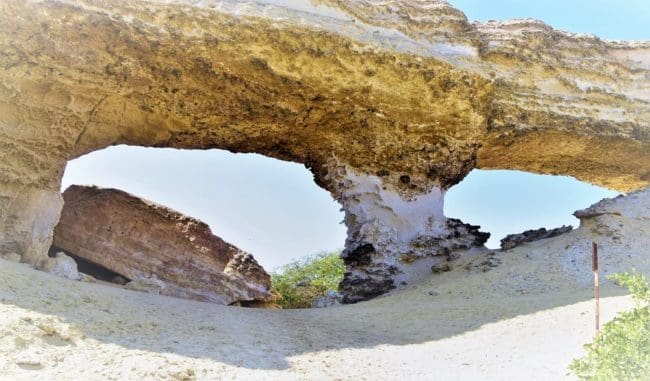 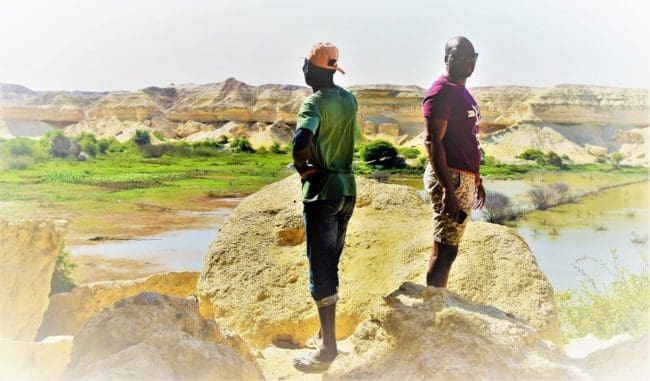 Arco has yet more remarkable desert scenery to admire. This time, there’s a freshwater lagoon with sandstone arches spanning the access track and framing the faded lime and mustard hued mesas reflecting in the blue water. Wilson says that escaped slaves used to hide in this area, living in the many caves. I’m thinking the formations look like a pagoda in the Forbidden City this time. We’re on the edge of Iona National Park here, which runs down to Namibia around the Cunene river delta. The guidebook says it used to teem with wildlife, but this has all gone now, driven out by war and poaching. It also says that the car park at Arco is renowned for snakes. I’m glad I read it after we had visited.

We’ve gone to the other extreme with lunchtime today and are heading back to town to eat at three. Except that we have a burst tyre and Wilson has to demonstrate his mechanical skills after we’ve skidded to a halt.

And Paulo in Luanda has phoned to say that my flight back to the capital tomorrow has been cancelled. I can’t go till Sunday afternoon. This is definitely Africa. 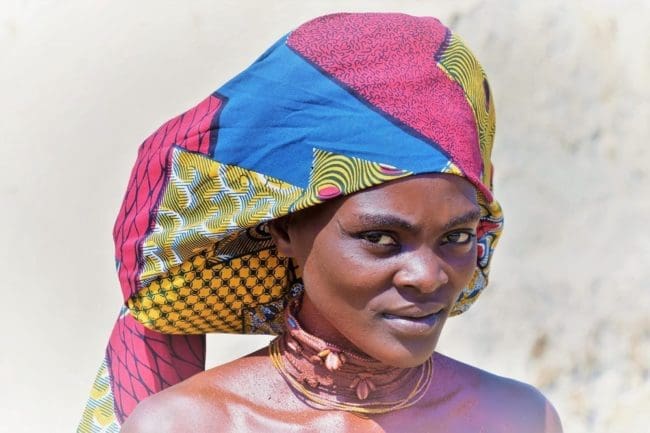 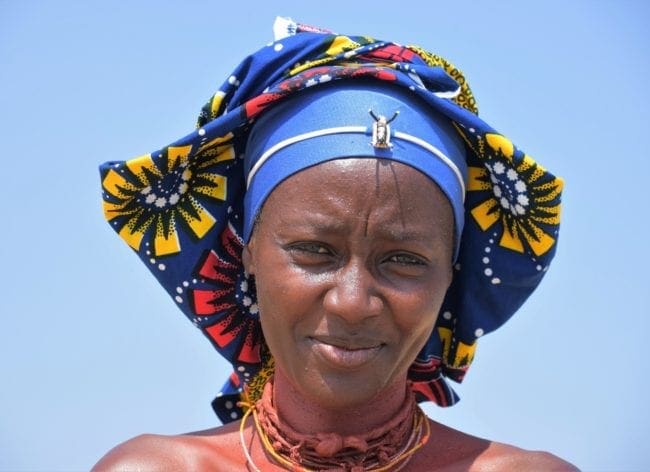 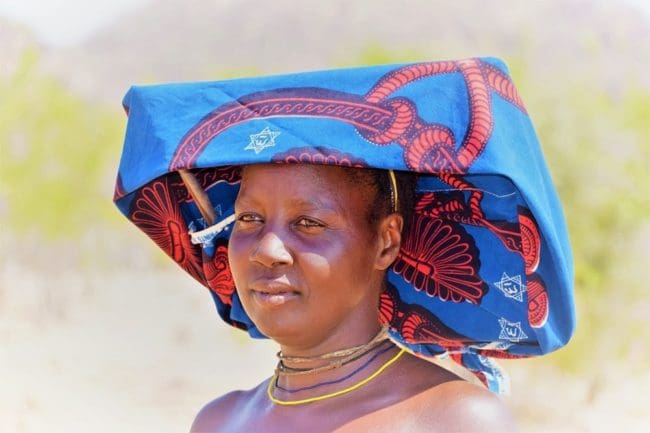 The Mucubal are a nomadic people and the women are famous for their unique headdress called the Ompota. It is made of a wicker framework, traditionally filled with a bunch of tied cow tails, decorated with buttons, shells, zippers and beads. The Mucabal ladies don their hats and bracelets with much giggling. I’m not surprised they don’t want to wear them every day. They are rigid and cumbersome, even if the bright colours do set off their high cheekbones very effectively. The women are shy and graceful and bare-breasted like the Muila, though they bind their chests with narrow strings of beads called oyonduthi.

The children watch quietly from a shelter. This feels more like a proper visit; some of the ladies are basket weaving and corn grinding It’s a beautiful setting, dominated by a towering volcanic plug. Nevertheless, they’re moving – some of the houses have already been dismantled, thin logs lined up on the earth. Wilson says the men have already gone.

Up the road, a gaggle of young ladies selling charcoal, who Wilson says are his friends. So, they have to be photographed and paid. I’m more and more uncomfortable about the commercialisation of the visits. It feels too much like a person safari. I’m happy to see the people rewarded for having visitors – they are all so poor and exist with next to nothing. The juxtaposition of the haves and have nots in Angola is stark. But I wish the photography was not the main event, could be done in a less intrusive way. Wilson says there isn’t time for this…. 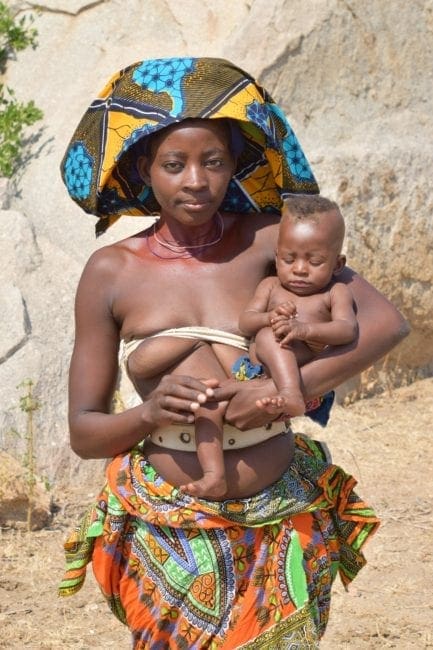 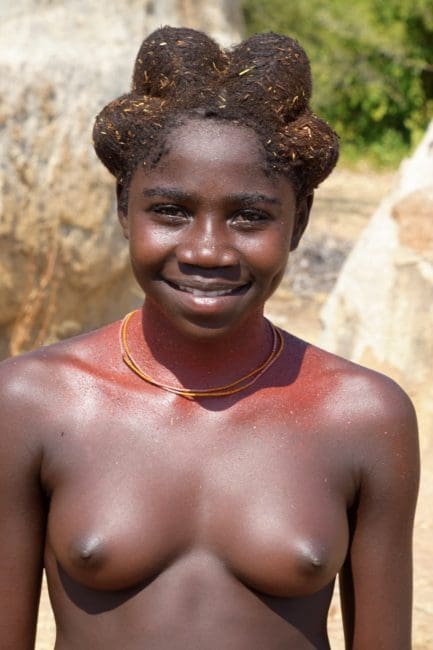 Even further round the volcano, at Garganta, is the home of the Nguendelenga people. I’m told there are only 200 or so of them left in existence, so it's not very aptly named. A group are sitting by the roadside plying their wares and most of them clamber excitedly into the back of the truck for the ride to their compound, a circle, barricaded with brush. There are 20 people, including warriors brandishing knives and bows in there, so I calculate we have ten percent of the tribe with us. The women are again bare-breasted, but have intricate woven and piled hair, covered first by a net and then by  bright cotton headscarves. They cover their necks with red mud to highlight their thin gold necklaces. Wilson goes to town here – the excitement indicates high expectations - and ultimately demands I pay 12000 kwanza. I tell him I’ve nothing left now for his tip.

Another late lunch of goat stew with beans in a local café at Bibala, nestling below the ridge down which we descended earlier this week. It has a huge railway station with pretensions well beyond the size of the town. We’ve criss-crossed the line several times. It runs from Lubango to Namibe and was built mainly to carry the black and white marble to the coast. 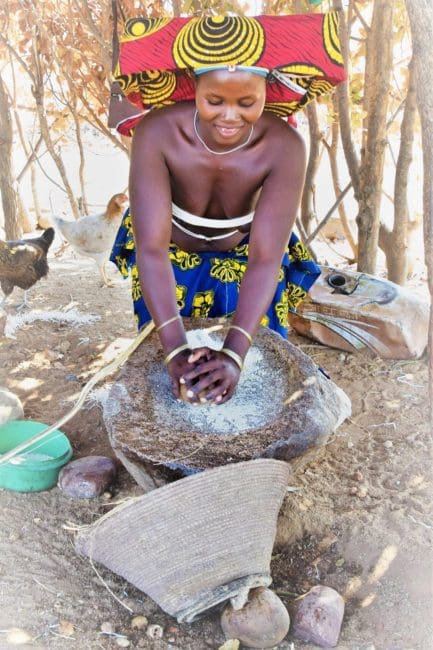 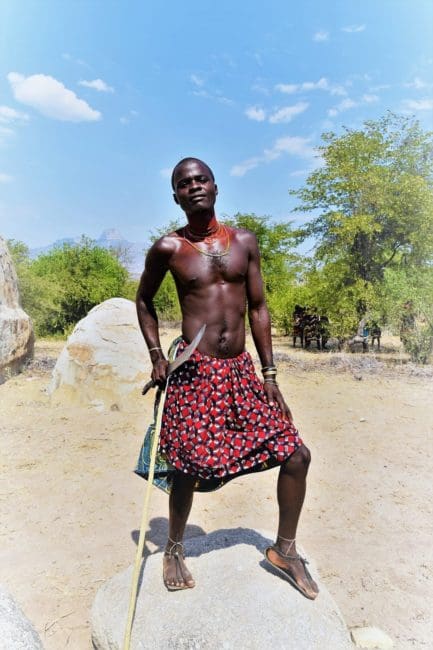 Back to Lubango and onto Sao Tome e Principe