Crete is Greece's largest island. That's why it is called krateos' or 'strong.' It is also the most southerly Greek island, known for its varied terrain, which ranges from fine-sand beaches to the White Mountains. Mount. Ida, the tallest of the range, is, allegedly, home to the birthplace of Zeus. It has an ancient history and is home to several Greek myths. But the description 'Island of Heroes' emanates from World War II, when the German occupiers were faced with incredible defiance, even in the face of execution.

The Palace of Knossos

Knossos is Europe's oldest city, the largest Bronze Age archaeological site on Crete. It dates from 7,000BC. The Palace of Knossos, was the ceremonial and political centre of the Minoan civilization and culture. It was famously unearthed by archeologist Arthur Evans. At its peak, the palace and surrounding city boasted a population of 100,000 people shortly after 1700 BC. It was abandoned at some unknown time at the end of the Late Bronze Age, 1380–1100 BC, but no-one is quite sure why. 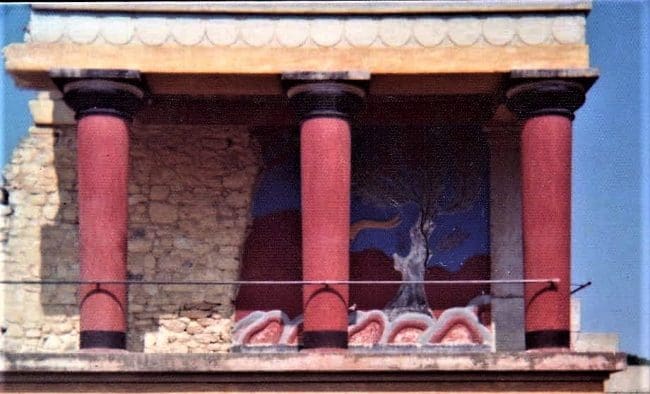 Excitingly, Knossos is thought to be the setting for the myth of the Minotaur. Theseus, Prince of Athens,, went into a labyrinth to fight the monster. a half man, half bull, who was kept there by by King Minos, the ruler of Crete. (The labyrinth was built by Daedalus of Daedalus and Icarus fame.) Theseus emerged victorious, of course, with the help of Ariadne, the king's daughter. There is definitely a prevalence of bulls here.

We got a lift on the back of a farmer's motorised truck,

Chania is definitely a picturesque town, on the north west coast. It’s known for its 14th-century Venetian harbour, narrow medieval streets and waterfront restaurants. At the harbour entrance there's a 16th-century lighthouse s. The red painted Nautical Museum has model ships, naval objects and photographs of Chania. ( I didn't go in). And I don't recall that much. It was a singles holiday......