From Luanda south to Lubango, with the national airline Taag. I’m reassured to see a nicely painted 737 waiting on the tarmac. Hopefully the oil money means new well-serviced planes.

Guide, Wilson (the last Wilson I met was my driver in Bolivia) is late to meet me at the airport when I arrive. He says he’s been cleaning his car. He’s six foot six at least, so I’m not going to remonstrate. Tonight’s lodge is so far out of town it doesn’t have an address. It’s very peaceful, with thatched bungalows..  A few surprised looking impala, and a posse of 30 or more peacocks patrol the grounds. 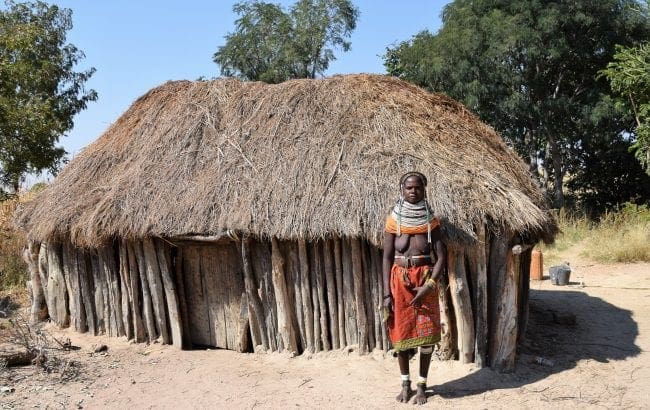 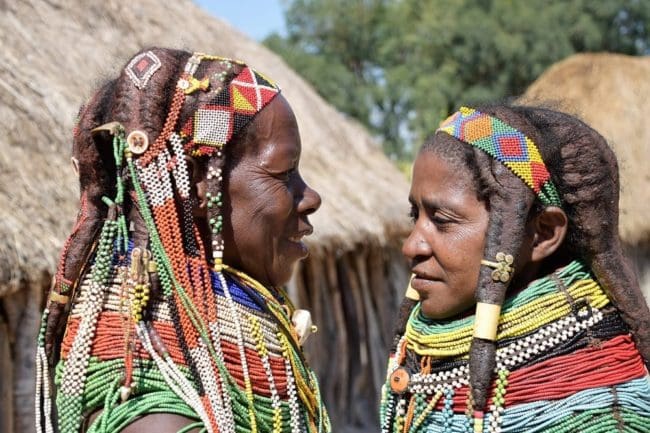 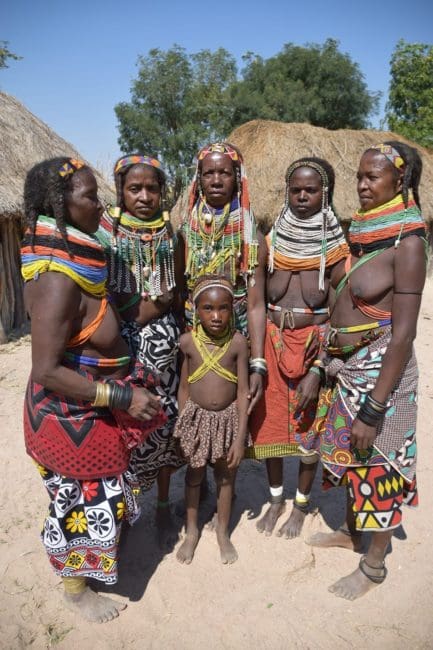 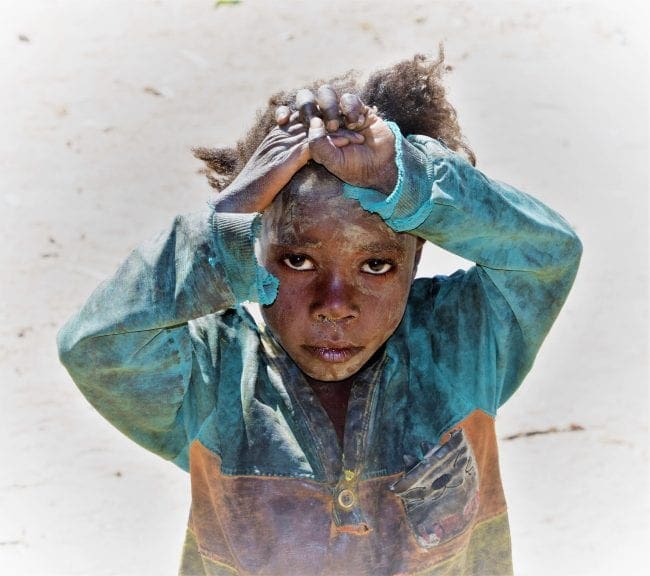 The Muila and Handa Peoples

It’s a mountain fresh morning, with sparkling clear air and blue skies. The road is bumpy and unmade, winding through tall aloes that frame the sorghum fields and more distant mountains. We’re off to see the Muila people to the south and the Handa to the north. The itinerary says this is so I can learn about their culture. Wilson has other ideas. He knows that tourists only want to take pictures.

So, he heads straight for the chief’s compound and instructs the head wife to round up some of the other women, who appear, dressed in their finest regalia, bead necklaces and head-dresses and topless; they divide their hair into plaits (or dreadlocks) and cake each section (called nontombi) with coloured mud, adding long trails of beads. There’s no messing about with ceremonial dancing for the punters here. Wilson orders the ladies to take off their plastic shoes and demonstrates  how and where they should pose. He says his father was a photographer before the civil war; the women don’t seem to mind and he orders me to pay them 1000 kwanza, (roughly 2 dollars a head). A little girl nicely got up in yellow beads and a tiny skirt only receives 500. The other, mud spattered and shock-haired children watch shyly, squashed together on a large tyre. Wilson says they don’t get tourists here. And that’s it. No-one so much as shows me inside one of the one-roomed mud brick  houses, until I ask. Then it’s a cursory peek. 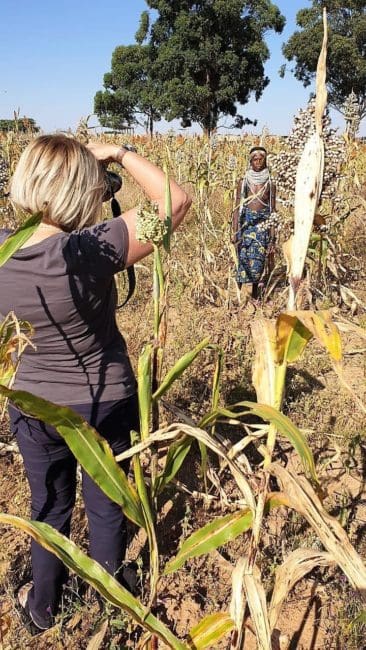 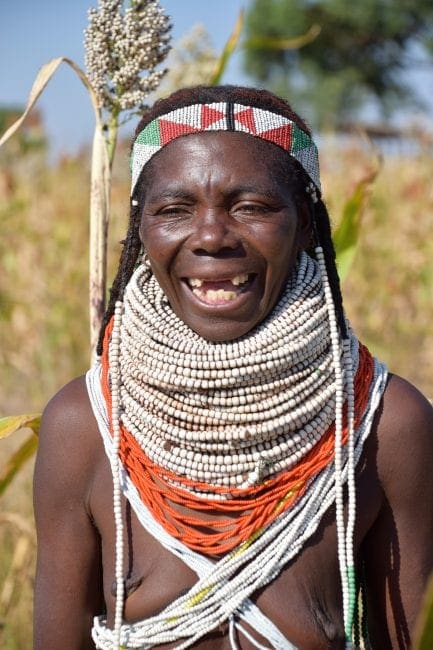 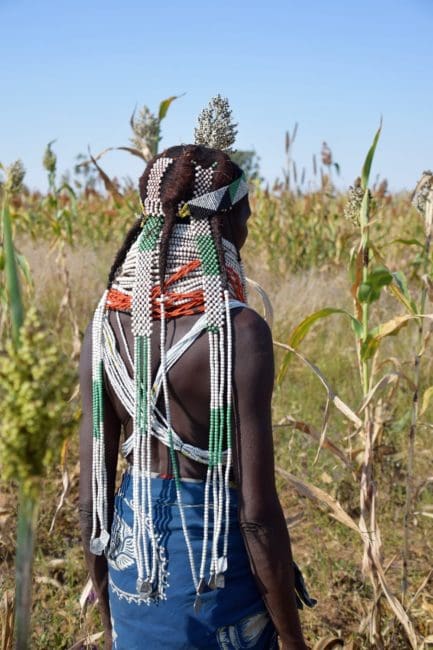 The afternoon is even more bizarre. We drive through the traffic of Lubango to the large market near Huila. There, Wilson sends runners in search of the Handa women, famous for their huge bead necklaces - they never take them off. He gathers up five or six and herds them away from the rubbish of the market, over the road to the sorghum fields – there’s still some plastic to avoid here. They giggle while they pose and I’m attacked by hundreds of tiny needle thorns, which makes them giggle more. I wield my Nikon SLR, Wilson once more acts as photographer’s assistant shouting directions. Solo poses and a group to finish, whilst a crowd looks on.

A quick whizz round the market (in the pick-up) and we’re off. 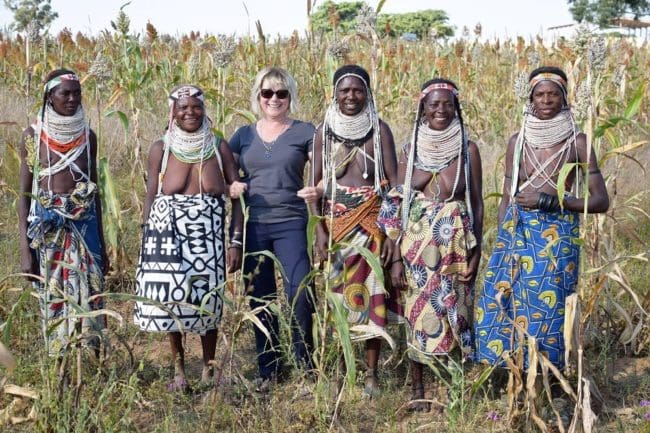 Charismatic Frenchman, who I met on the plane, (who has tracked me down on Facebook) warned me that that the food was bad here, even though some of the restaurants seem very presentable. He’s right. It's mostly very salty and fried until it’s so tough I can’t get my knife (or teeth) into it. It doesn’t help that everyone speaks Portuguese and very little English. I can have a reasonable stab at deciphering menus with the help of my limited Spanish. Though last night I thought Wilson had pre-ordered me beef for dinner and I got chicken. (Well I’m fairly sure it was chicken.) But there isn’t a menu at breakfast. The smiling waitress has just waved an egg and can of frankfurters at me. I make a thumbs down towards the the can and she’s gone to try and find the cook.

Directly south to Chibia, an affluent little town that is thriving because of its proximity to black marble quarries. It has broad avenues of low pastel colonial houses, lined with flame trees, and most of the shops are glass fronted. There are working ATMs. This is very upmarket Africa. 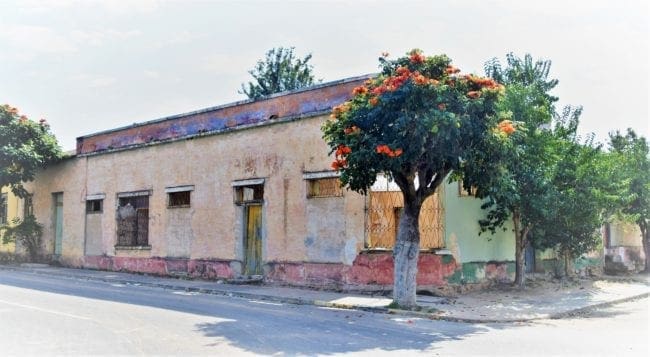 We proceed out of town, to yet another market, rows of booths made of woven wood. It’s very quiet here too. Wilson says this is because it’s not Monday. I’m feeling the days of my trip could possibly have been better arranged. Not to be deterred, Wilson is straight into tracking down an assistant, who duly returns with half a dozen Muila ladies. They are sporting more clay in their locks than yesterday’s women. The adolescents have mud necklaces. Stacked beads are only for married women and the rows increase as they age. They never take them off. There are also two bewildered babies to act as accessories. Today, my backdrop is the market booths and more distant fields of sorghum. I’m not going into those again. I’m still picking out thorns and scratching my bites. 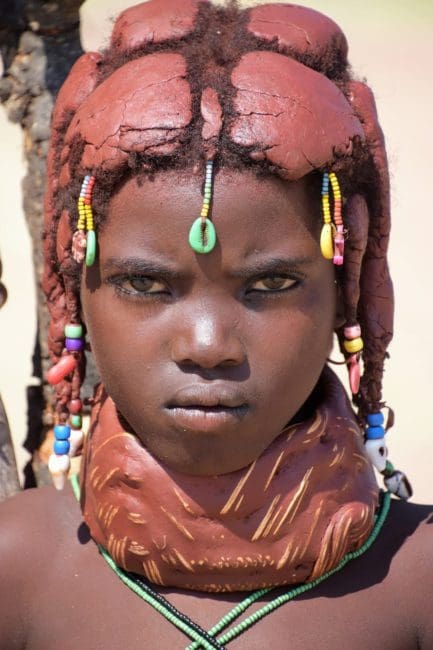 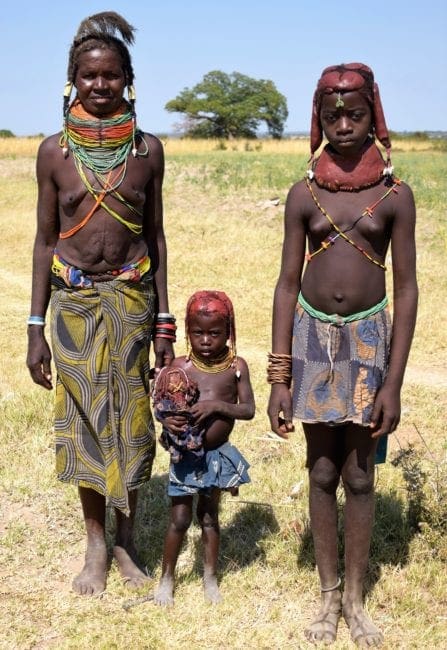 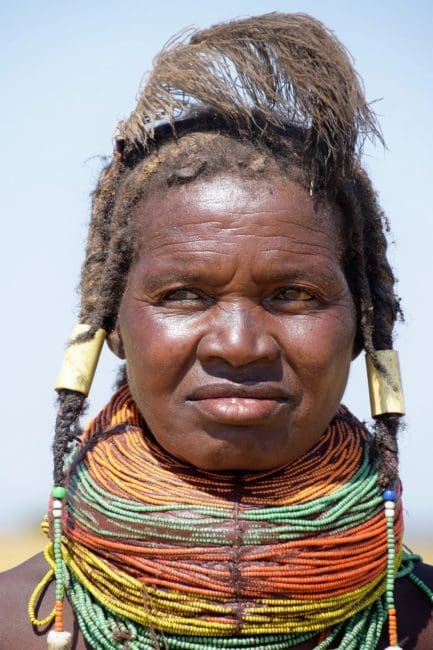 Much to Wilson’s bewilderment I wander round the stalls, after I’ve arranged my subjects, observing what little activity there is and trying to talk to the local people. Wilson and his assistant check to make sure I don’t want any more models. There’s a very cute little girl with a doll, so she is duly photographed and paid. And then we’re off. A dozen or so teenagers clamber into the back of our pick-up for a lift to school. They’re running late. I’m not surprised - it’s 11 kilometres up the dusty road.

In the afternoon I’m a proper tourist. We drive up into the mountains, through boulder strewn hills to the edge of an escarpment and a stunning view down the 2000 metre (if you believe Wilson and 1,000 metres if you believe the Bradt guide) Tunda Yala Gorge and across the plains below. It’s a tranquil spot, though the Bradt guide says that rebels were blindfolded and made to walk over the edge here. Wilson says only one person has died here - they drove their bike over the edge accidentally. 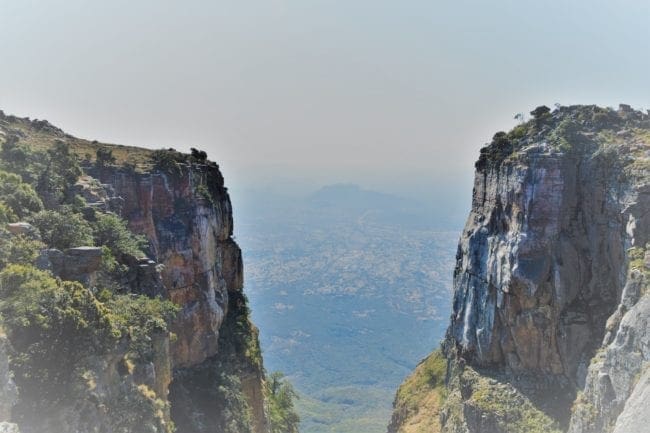 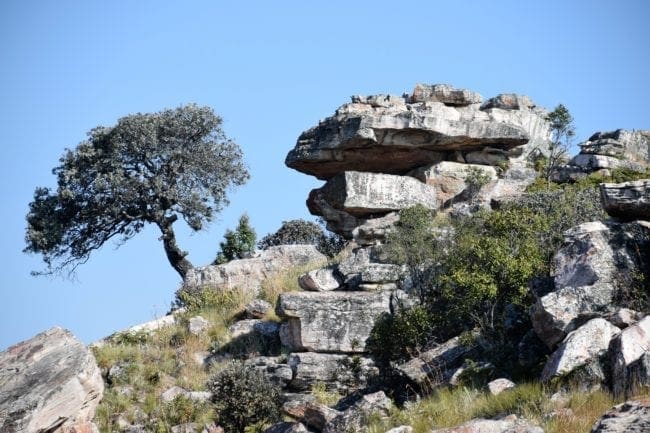 Lubango, the Hollywood of Africa

Last, a tour of Lubango. It’s almost encircled by mountains, crowned with a 30 metre copy of Rio’s Cristo Rei statue and a Hollywood style Lubango sign. This city  is also prosperous and well organised, with numerous deep candy civic buildings, lots of churches and a pair of monstrous Chinese hotels, one bright yellow, one a very nasty shade of pink. Chinese construction work abounds around the area. They built the roads (which are fairly well maintained) and donated at least one hospital. Wilson says that the new president has told them to go away now. They’re not getting the minerals.

Up to the Cristo for another panoramic view. Like the sphinx, his nose has been damaged by bullets, but this time it was the Cubans rather than Napoleon. They’ve done their best to repair him. The Lubango sign is even more battered close up. Wilson is bored with taking pictures of me and rounds up three more Muila teenagers who are hanging around the statue trying to pick up some extra money. He’s bargained them down to 500 kwanza for all three.

Back in Lubango, after visiting Namibe, we’re in a Portuguese/Brazilian restaurant for dinner. Picanha - thin sliced beef and more bean stew. We’re now behaving like a married couple. I read my book and Wilson watches the football on the television. His team, Sporting Lisbon are playing Porto in the Portuguese version of the FA cup final. It’s down to a penalty shoot-out, but Sporting take it on the last kick, so all is well. 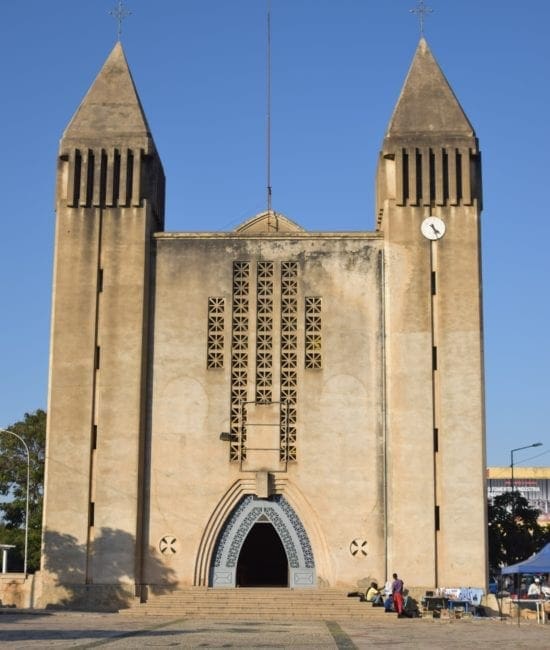 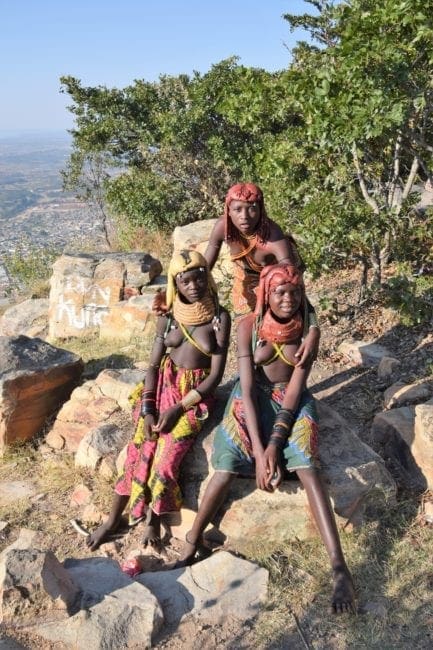 Now I have the day to fill before my postponed flight. I was supposed to return to Luanda yesterday. At breakfast they sneak the frankfurters past me, hidden inside my breakfast omelette. Then Wilson takes me to a local waterfall. Some small boys show us around three very small separate rocky sections, but the cascades hardly deserve the name of fall. The slippery scramble up and back and the children’s acrobatics and cavorting are more memorable.

Wilson declares that he knows a place where we can have lunch and watch the Monaco Grand Prix. It’s a sort of down market country club, with a small swimming pool and plastic chairs and tables. It’s somewhere to sit quietly in the sun and relax, even if the seats are a little punishing. I ask Wilson to confirm when the Grand Prix starts. He goes to ask and returns with the news that they don’t have the sports channel here. 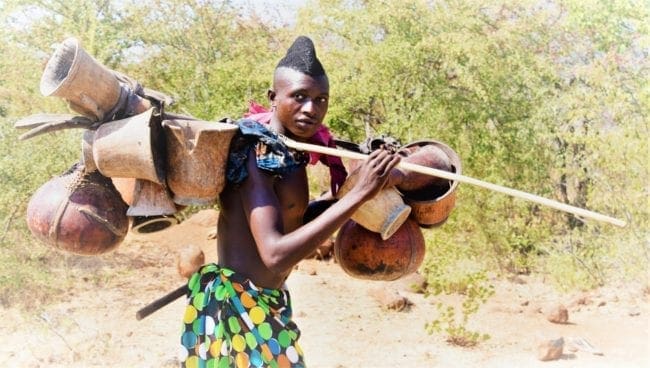 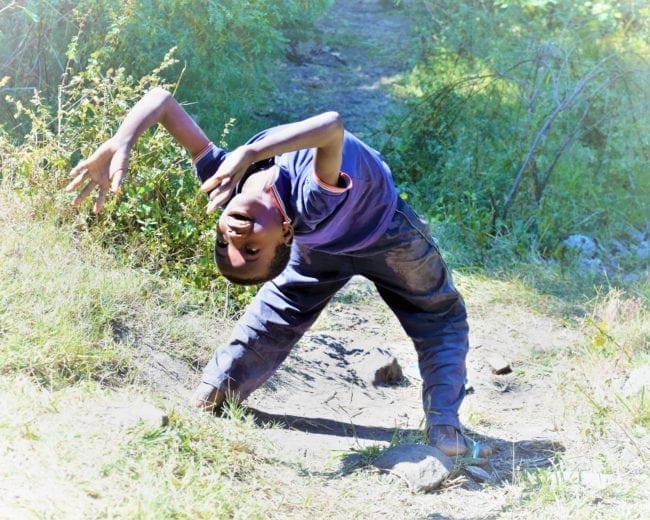 Eventually, to the airport. I’m apprehensive, as I don’t have a new ticket, especially as the check-in clerk looks perplexed when he scrutinises my passport. ‘But there was a flight to Luanda yesterday,’ he announces. This is so definitely Africa..