To travel hopefully is better than to arrive. I'm on my way to Cape Verde. I definitely begin to get into the mood more as we bump along and I can manage to persuade myself that work can wait till Iyou get back home. And at least my plane hasn’t disappeared yet...though Katie Price is on board, complete with four children and current husband. In economy too, not even the extra leg room bit. I've been chatting to her in the toilet queue. though I didn't realise who she was then. The lady in the seat next to me told me.

I get a really good peek at the scatter of islands that form the Cape Verde group as we swoop in. Hardly anyone in the UK had heard of them. and I'm visiting three of them - Sal, Sao Vicente and Santo Antão. The group is about 300 miles west of Senegal, but used to be part of (also Portuguese colonial) Guinea-Bissau.

And things get adventuresome as soon as I arrive. The rep meeting me has tried to persuade me that I would rather spend the four hours between my arrival on Sal and my inter island hop to São Vicente in the 'executive airport lounge'. Instead I opt for my original arrangement that was a trip into the tourist town of Santa Maria. It's on the other side of the island - a fifteen minute trip then. 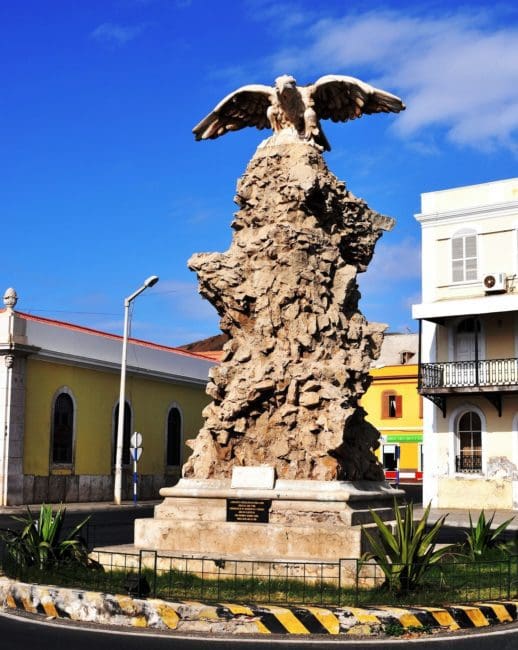 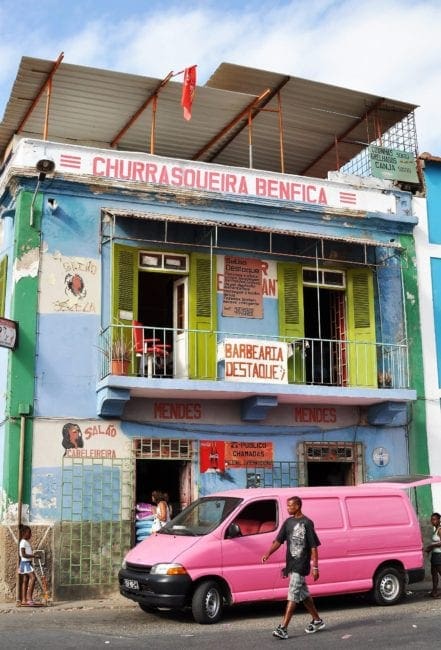 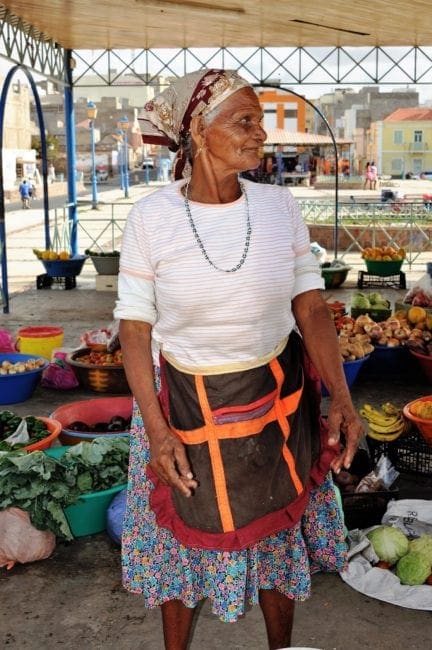 Cape Verde is anything but green on Sal. It is a sweep of brown with small pointy volcanoes sticking out, next to rows of salt pans. So arid it makes Abu Dhabi look lush. Santa Maria is vaguely like The Canaries transported to a mid west desert outpost. Entirely laid back. The beach is very nice. White coral, lots of sunbeds but not too crowded.

I have been allocated a day use room that involves checking into a hotel and signing copious forms. I'm also issued with a wrist band. It all seems very over the top but I sally forth for a visit to the buffet before it closes. The offerings are plain weird. Lots of shredded omelette, fritters that are mainly batter with a few French beans protruding, fried spam that is reminiscent of pink leather and chunky omelette squares with speckles of tinned ham. Also hot tinned pineapple and peaches. I know they have to import most of their food but this is ridiculous. Can I look forward to feasting like this all week?

The rep pays me back by sending a driver on his own to return me to the airport. As I'm a bit unsure about being accosted by an unknown taxi I ask the hotel to phone for confirmation that he has been sent to fetch me. The driver in his turn exacts revenge by pretending he's in a rally and belting along the twisty roads with the Benfica football match on the radio at full volume. I get the rest of the match on the TV at the airport as the connecting plane is, predictably, two hours late. Everyone speaks creole or Portuguese here so I can't follow the commentary. It's clear that Benfica have won though as everyone is in a very good mood. I suspect they delayed the plane so they could watch the rest of the match. 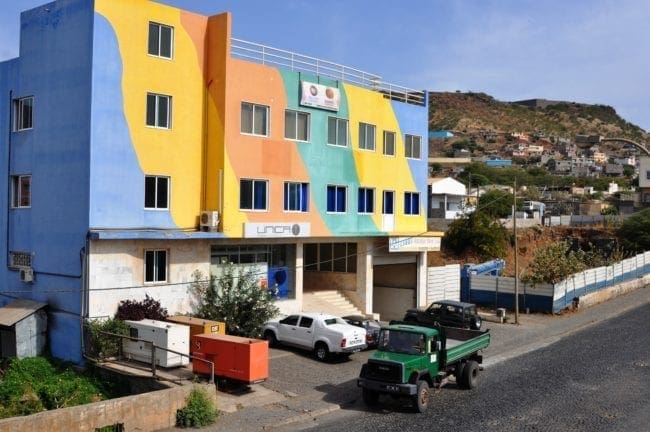 I have arrived, but in the wrong place, so I'm extremely grumpy. I missed the onward connection, so an unplanned overnight in the busy, very untouristy capital Praia on Santiago Island. Loud TV all night, lots of traffic outside on a road with grumbling cobbles too. So tired I drop my i-phone and smash the screen which has only just been repaired. All equals one very tetchy me.

Another weird food experience. We are allowed free breakfast in the cafe downstairs. The offending TV is still on, and so is the football it seems. No one speaks English, so we point at what we would like to eat. There's a mixture of fruit and sweet and savoury pastries and no limit to what we can have, apparently. I'm tempted to keep on pointing to see exactly how much the smiley attendant will dole out, but I retreat after securing a mound of food, a selection of juice and a large bottle of water. 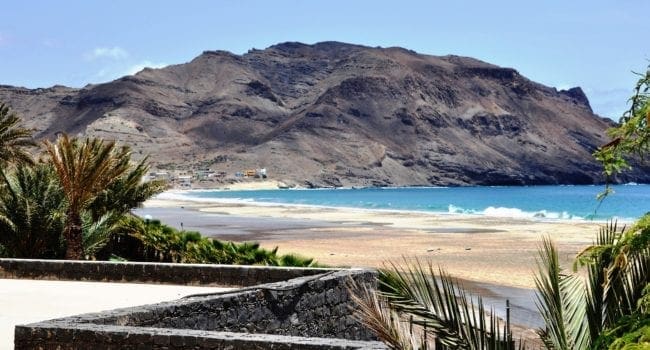 This plane is only an hour late and so I finally reach São Vicente. I think it's safe to say that tourism is pretty embryonic. The roads are dirt and the beach, well that looks like dirt too. The hotel is next to the airport, which is convenient, if a little noisy. Fortunately, it's not exactly Heathrow. The hotel layout is a bit holiday camp with green grass carpeting round the various pools. And guess what, lunch is a buffet. And so is dinner. Though slightly less weird. I recognise meat, salad and bean stew.

This is sold as the island of culture and poets. Perhaps I will glimpse some of that tomorrow. For the moment it's sadly, cloudy, with a posted forecast that says it will be like this all week. It's just about warm enough to doze on a sunbed. Till I'm woken by yet more loud music. Time for pool games!! Back to my room. But no, screams from a baby emanating through the wall. 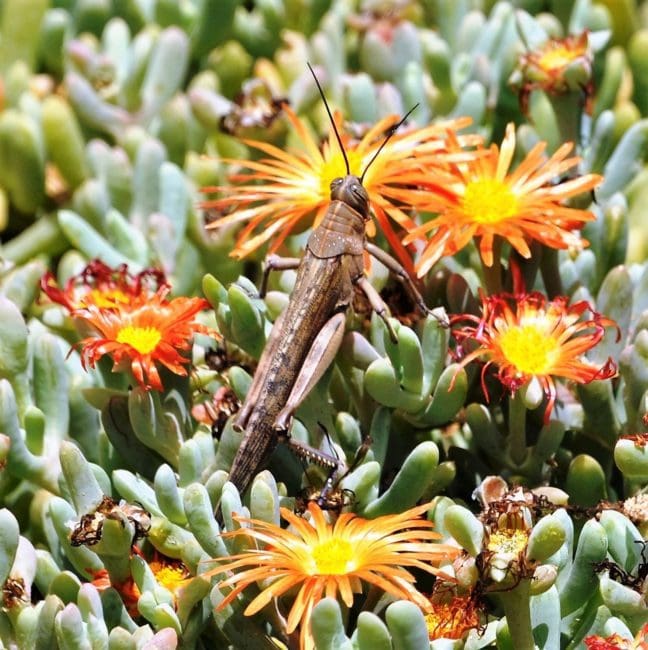 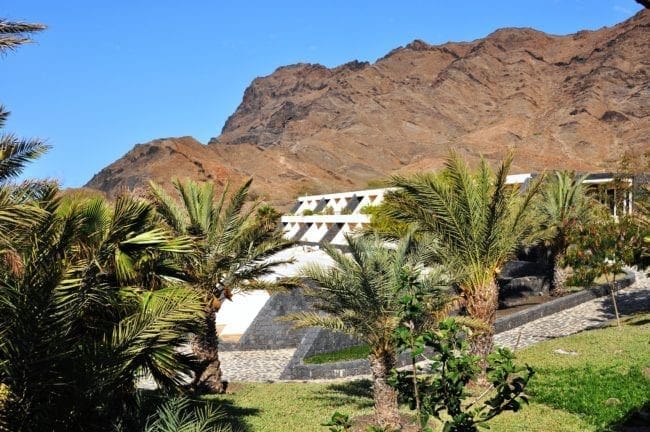 Well the weather forecast was wrong. So far it's been gorgeously sunny. I'm on my lounger, by the adult pool this time (the quality of the fake grass is infinitely superior,). Everything looks better in the sun. The surrounding mountains are majestically craggy, the little orange cactus flowers are opening up and even the beach looks sort of decent. It's so warm I even have to seek some shade - later. 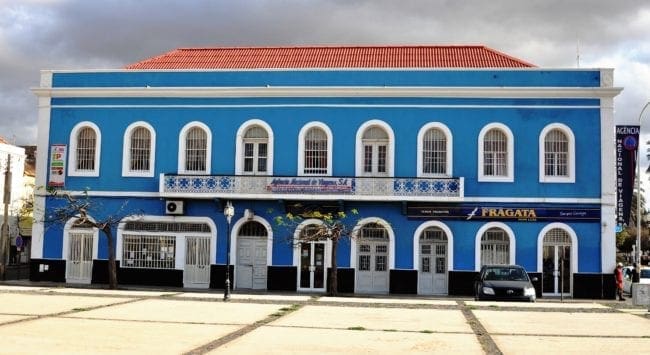 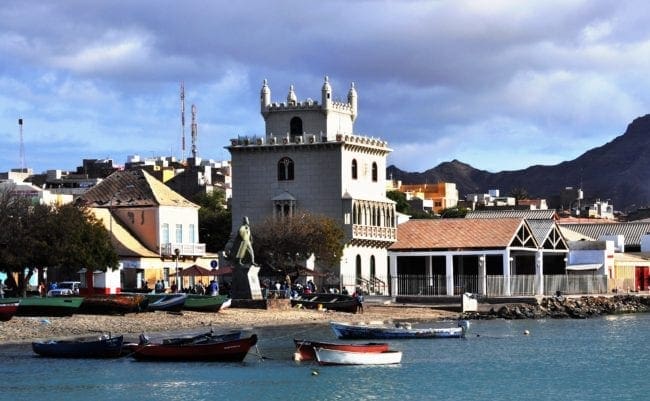 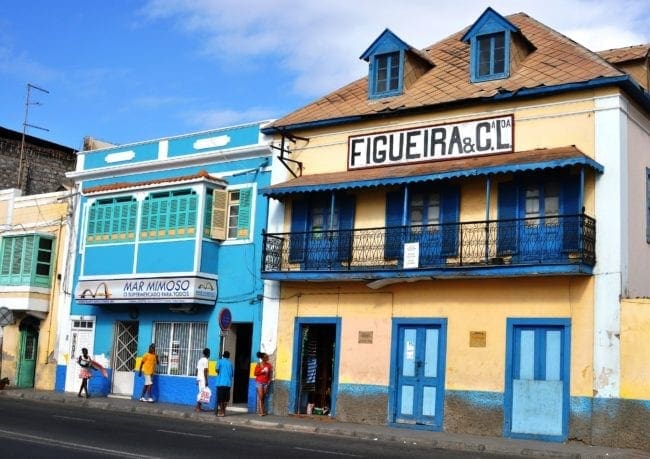 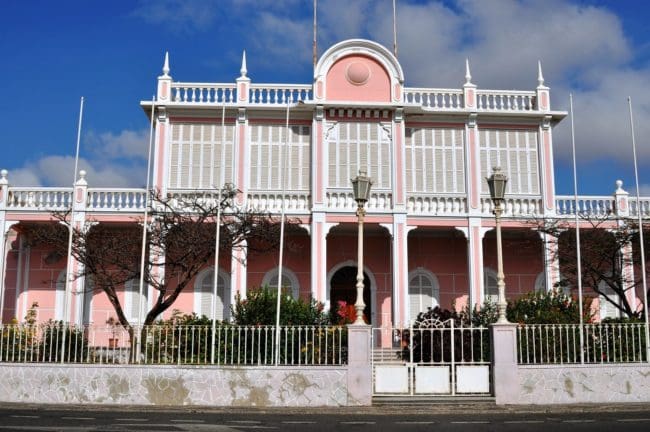 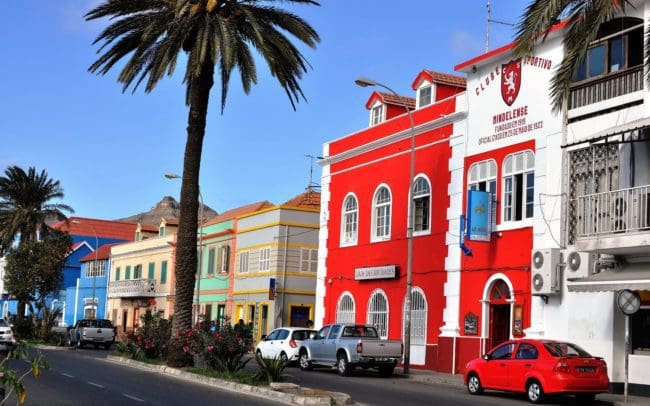 Late afternoon, I hop on the bus to Mindelo town, famed for tis annual carnival; and as the home of the singer Cesaria Evoria. (The island airport is named after her too.) It takes ten minutes to zoom across the island, so I'm not sure how they manage to eke out the day tours they offer.

Mindelo is very pretty and colourful. There's a little port with up market glass windowed cafés and a small market and there's live music belting out of several bars. It's all more Mediterranean than African, not at all like the mainland three hundred miles away. It's almost litter free; most of the people live in good housing, though admittedly some cottages are unfinished. Everyone walking the streets is very smart, and mostly tall and beautiful.

On my return I've found a diminutive, fairy light strewn restaurant just outside the hotel. A buffet free zone in Cape Verde. More celebrity. It turns out my rep on São Vicente is a famous singer. Reggae and other stuff he says. All the locals gape as we walk past and the braver ones ask for his autograph. Edson Duarte. He's certainly tall and gorgeous. 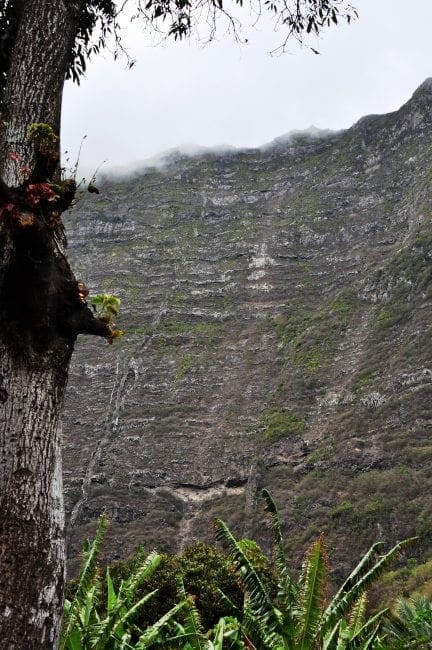 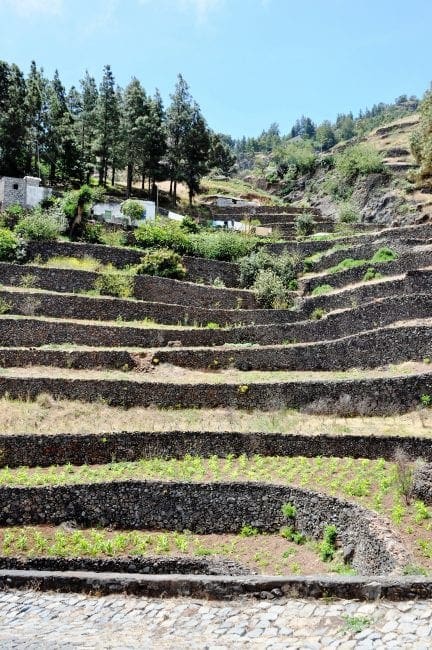 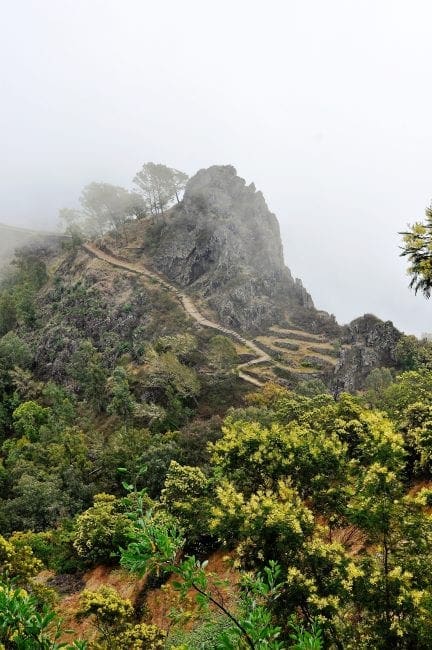 The islands are very different in character. Today, a day trip on the ferry to Santo Antão docking in the largest town, Porta Nova. This island is mostly mountainous, but also has a small desert area and is extraordinarily pretty; volcanic slopes patterned with stone terraces, pines and cypress trees. It seems to have escaped the deforestation of the other islands. Or perhaps the forest regenerates in the constant cloud cover. We drive on a road perched on the volcanic ridges, round the rim of a giant caldera, sheer sides plummeting into velvet depths. The road is cobbled the whole way - it took 47 years to construct. 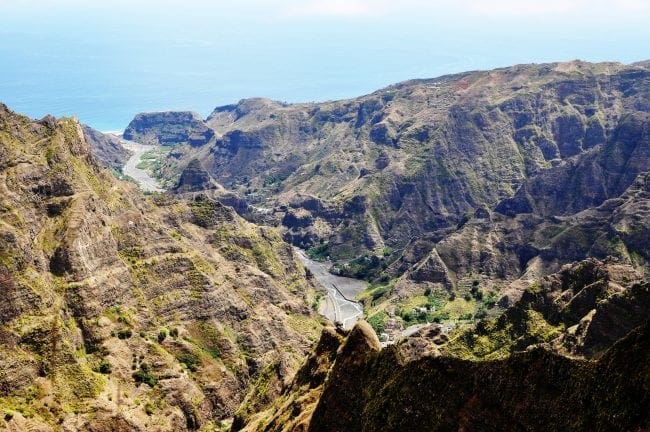 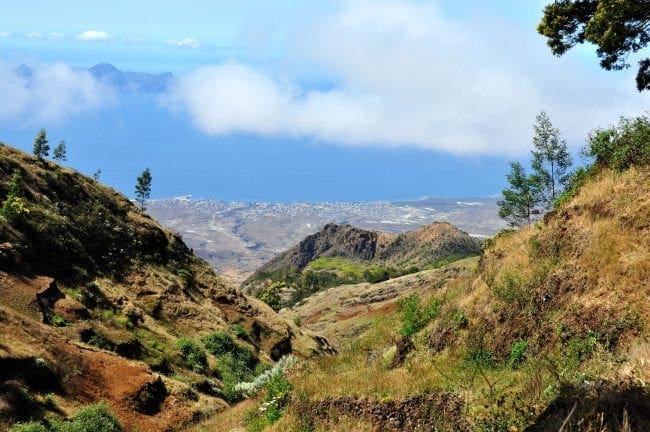 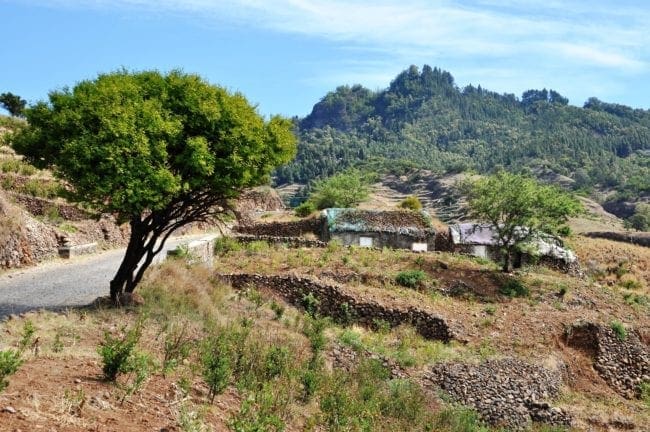 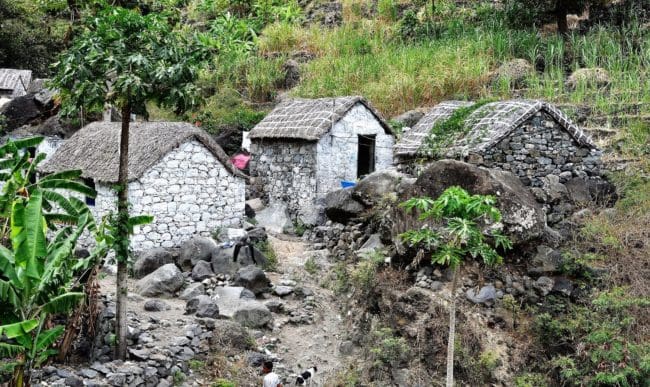 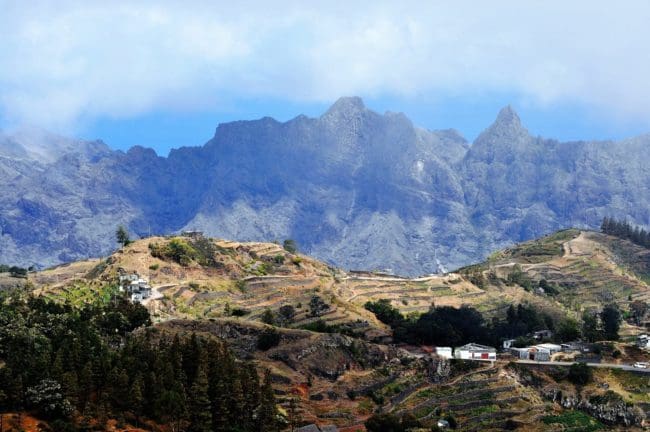 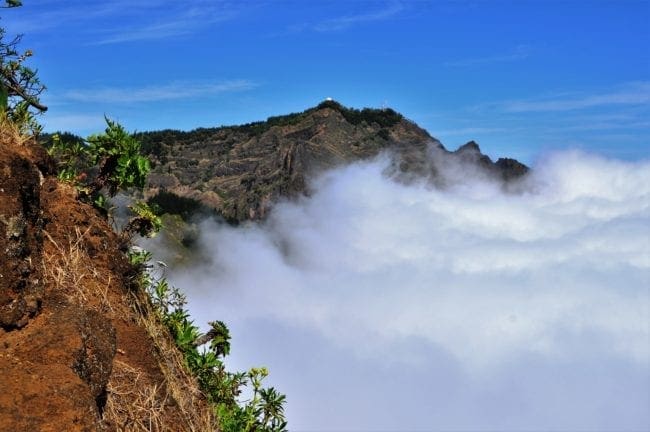 Into the bottom of the caldera, where the agriculture is intensive. Everything tropical seems to grow here, banana, mangoes, papaya, and sugar cane. Traditional thatched stone houses nestle against the steep walls and little cobbled irrigation channels meander through the crops, a relaxing trickle.. This is the food basket of the island, though much of the produce is shipped over to São Vincente, to feed the ever growing population of Mindelo. 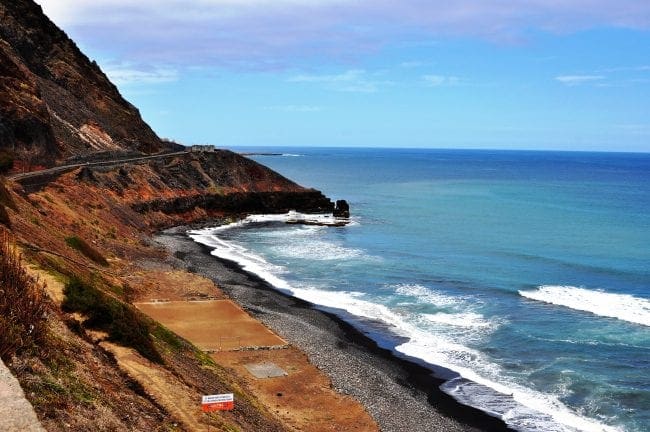 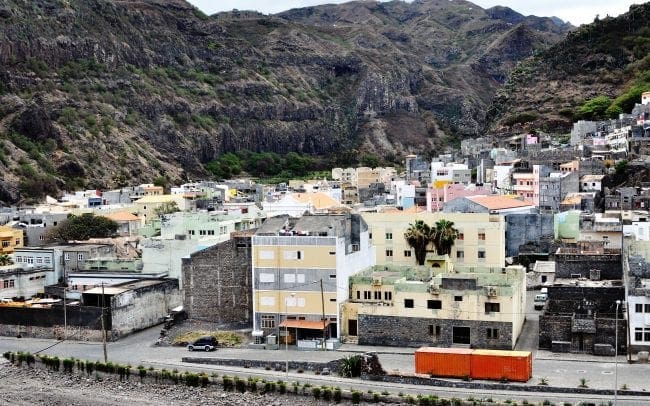 Then along the coast, incredible rock formations, organ pipes and little twisty outcrops straight out of The Hobbit. Bright seaside ports and a medley of fishing boats drawn up alongside. The towns are a mass of white and pastel cuboid houses emerging from the dark rock. There. even time to stop and watch the locals spilling out of church - they've been to an Easter Week celebration..

The ferry is carpeted in fake grass too. Is this why it's called Cape Verde? 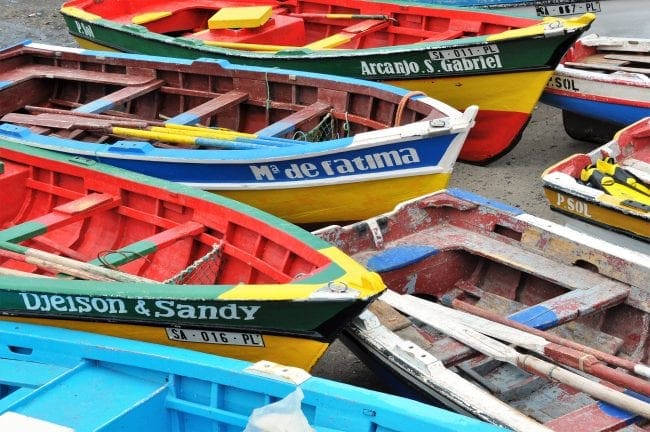 The Godfather of Cape Verde

My driver has long Rasta locks and is called Dongo. He seems to own half the island. He has a fleet of eight vehicles that transport all the tourists round. I use the word vehicles advisedly. He castigates me for referring to his pick-up as a van. He also owns some construction companies, real estate companies and a cafe. All the way round he is on his mobile, checking up on all his employees. We inspect the cement in his lock-up and see if all his buses are in the right place. He also salutes or speaks to various men seated by the roadside. His tone doesn't sound that friendly to me. I'm not sure if he's the island mogul or the island mafia. Best not to upset him. 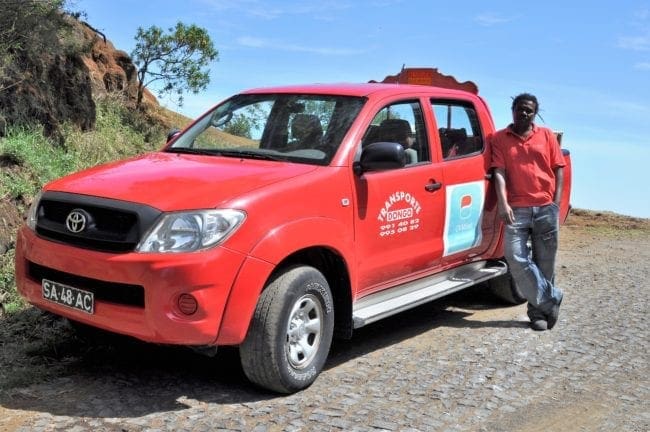 Today I fly back to Sal. The plane is late, quelle surprise, but only 40 minutes late. Apparently it only counts as late at all unless it is well over half an hour behind.

This hotel is very different again. It's all plate glass, decking and white umbrellas, but still sprawling. No grass in sight. The weather forecast has thankfully continued to be spectacularly inaccurate, with temperatures in the thirties today. The beach here is definitely premier class, the sea is at its most azure and the ice cream is delicious. 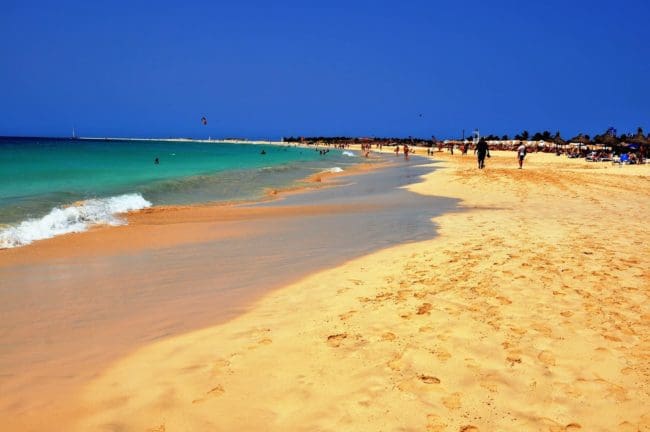 There are plenty of little bars and restaurants too, though the town is nowhere near as pretty as Mindelo. And here there is hassle, more like the mainland. There's a tout outside every shop. The holidaymakers are a mixed clientele. Mostly German and French in my hotel. Overall, we seem to be on the verge of upmarket, but not quite. It could go either way...

Home...no Katie on board this time, though my flight neighbour this time tells me that she and husband had a prolonged shouting match on the beach one evening. It's not all done for the cameras then.