The words French Riviera (or Côte d'Azur) are synonymous with fabulous sun soaked (as the Daily Mail would say), relaxing holidays, combined with the glamorous high life. The movies tell us so. There are lists of them on Wikipedia – And God Created Woman, Dirty Rotten Scoundrels. Not to mention Monte Carlo or Bust (which they don't). And the Cannes Film Festival is, of course,based here.

No-one is quite sure exactly where The French Riviera is, however. It was, vaguely, the Mediterranean coast of south-eastern France. Entirely within the Provence-Alpes-Côte d'Azur region. The mirror image of the Italian Riviera, from which it derives its name. (Cote d’Azur because of the gloriously blue sea and sky.) St Tropez to Menton and the Italian border, maybe. In her 1955 novel, The Talented Mr. Ripley, Patricia Highsmith describes the Riviera as including all of the coast between Toulon and the Italian border. Though I’m not sure how she is qualified as a geographical authority. Today, the term is often applied to the whole of the French south coast. 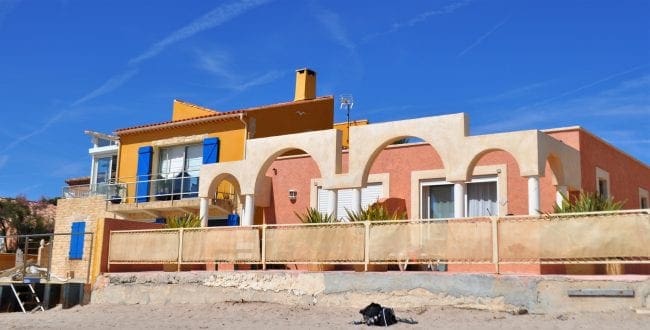 How Did the French Riviera Become a Tourist Hot Spot?

The Côte d'Azur was once a remote and impoverished region, known mostly for fishing, olive groves and the production of flowers for perfume (manufactured in Grasse). In the late eighteenth century, due to the consistently warm climate (310 to 330 days of sunshine per year) and gorgeous Provencal scenery, it emerged as a fashionable health resort for the British upper classes.

The arrival of the railway in the mid-19th century, established the area as vacation hot spot. Royalty, the rich and famous made it their playground. And then artists and writers arrived: Pablo Picasso, Henri Matisse, Marc Chagall, Francis Bacon, Edith Wharton, Somerset Maugham, Friedrich Nietzsche, Frank Harris, Anton Chekov and Aldous Huxley to name a few. The French Riviera coast today, includes jet set resorts like Saint-Tropez and Cannes, and the enclave that is the independent microstate of Monaco. Each year, these Riviera ports host 50 percent of the world's superyacht fleet, with 90 percent of all superyachts visiting the region's coast at least once in their lifetime.

Like those who journeyed before me I first discovered the French Riviera on trips to and from Italy and beyond. It's a great place to stop over and unwind after a trek to the outer reaches of Europe. But I've also taken very enjoyable short breaks, in Nice and Hyeres.

Nice, the Hub of the French Riviera

The fashion for visiting the French Riviera began in Nice. The trend was begun by the novelist Tobias Smollett, who visited Nice in 1763 and wrote about it in the prosaically titled Travels through France and Italy. Doctors at that time began prescribing climate therapy. As a result, Nice was filled with "a colony of pale and listless English women and listless sons of nobility near death" (according to historian Paul Gonnet). Victoria and Edward VII came and Henry Cavendish, who discovered hydrogen, was born here. the main esplanade is even named the 'Promenade des Anglais'.

But Nice's appeal didn't extend only to the English. other aristocracy and royalty, especially the Russians, flocked here too. They still do. Nice attracts 4 million visitors a year. 'Because of its historical importance as a winter resort town for the European aristocracy and the resulting mix of cultures found in the city', UNESCO proclaimed Nice a World Heritage Site in 2021.

Nice is a very ancient settlement. There's an archaeological site, Terra Amata, an archaeological site, here, which shows very early use of fire 380,000 years ago. Its name derives from the Greek town founded here in the fourth century BC- Nikaia, after Nike, the goddess of victory. Because of its strategic location Nice has changed hands many times over the years. It has been aprt of Savoy and also, in the nineteenth century, the Kingdom of Piedmont-Sardinia. the legal predecessor of the Kingdom of Italy. It was re-annexed by France in 1860. 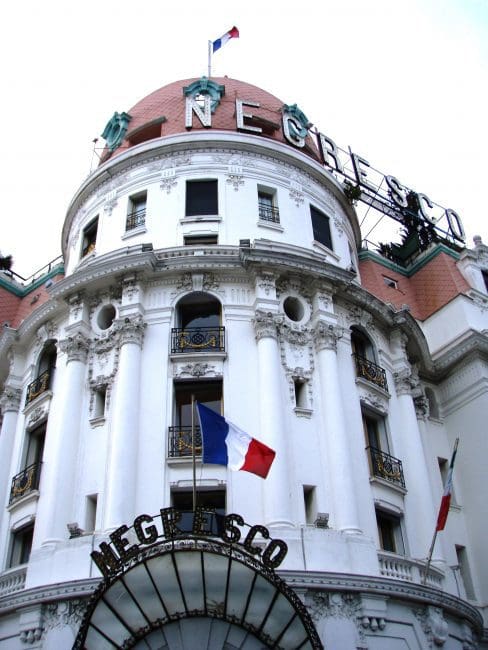 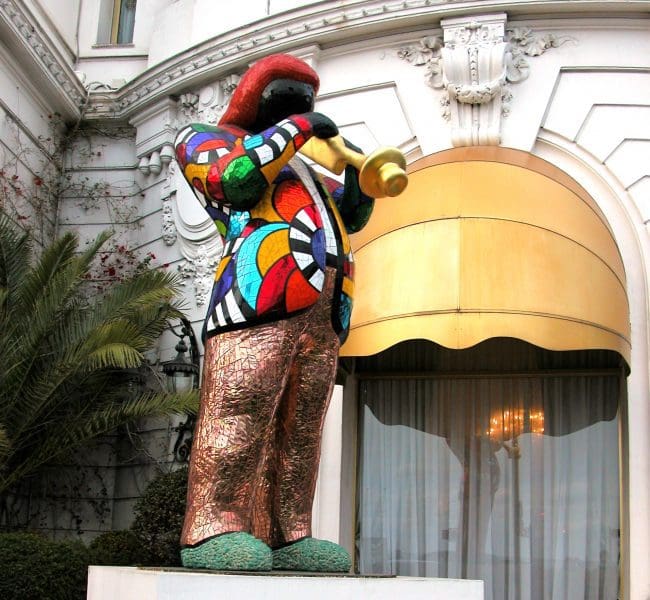 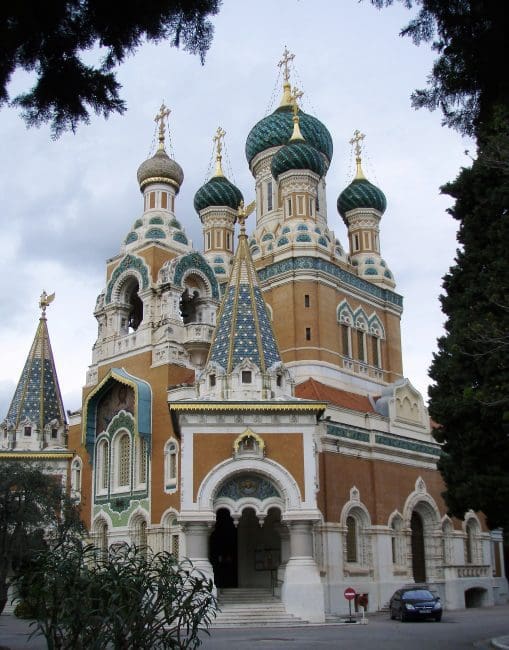 I've flown into Nice - the airport is the third largest in France. And Nice is nice! The city is nicknamed Nice la Belle, which is also the title of the unofficial anthem of Nice, written by Menica Rondelly in 1912. But you’re definitely one of the hordes of (English) tourists here. The main joy of Nice is just wandering. Along aforesaid Promenade des Anglais., with everyone else. The must see here is the red domed Hotel Negresco. It's named after Henri Negresco who built it in 1912. It's (supposedly) the epitome of luxury and the go to place for celebrities. (Elton John featured it in his I'm Still Standing video). The fifth floor is for VVIPs only. You might also stop and admire the Russian Orthodox church.

The Promenade des Anglais runs along the Baie des Anges ("Bay of the Angels"). The beach here is just grey shingle. (It's the climate that's important, I'm told). If you want a decent sandy beach, you can take the coastal train out to the suburbs of Nice and Villefranche-sur-Mer’s Plage des Marinières. 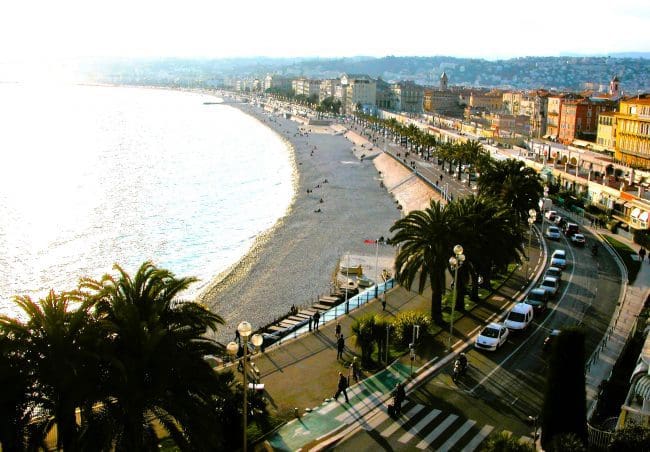 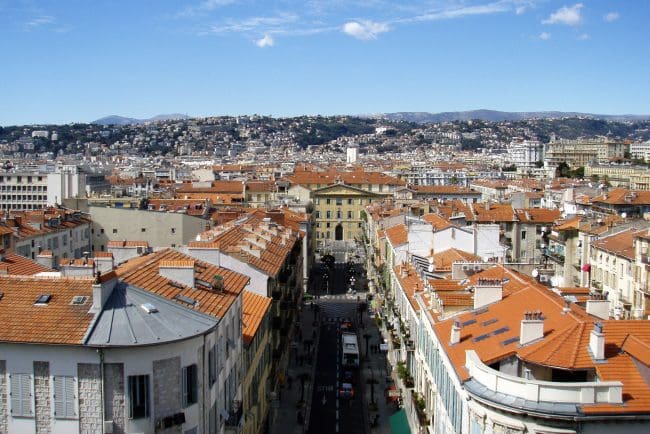 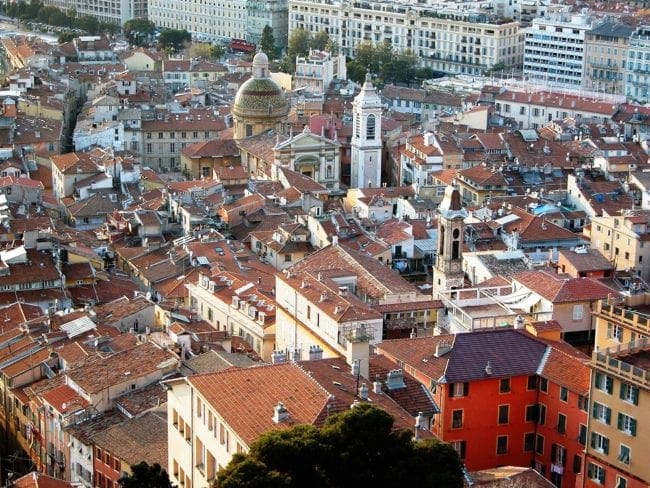 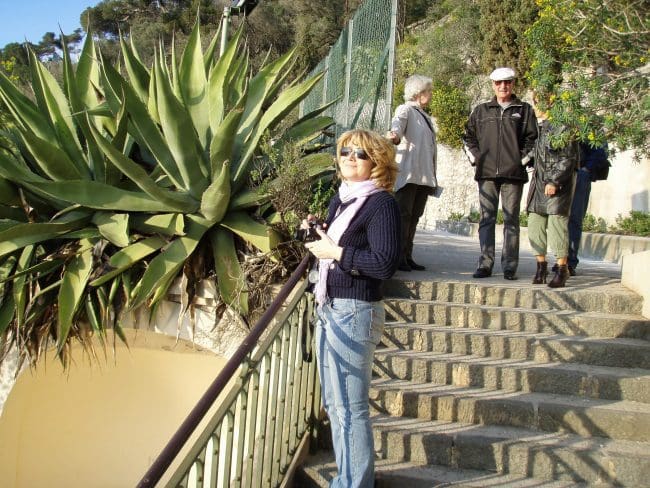 There's a great view of the red roofs of the city from 92 metre Castle Hill, more or less in the centre of the town's coastline. To the east, the port, and to the west, the Old Town of Nice. This is also a lovely place to stroll. Mansions, squares, plenty of dinky shops and souvenirs, cafes and restaurants.

And when you're in the mood for culture, there are the galleries and museums. As I've mentioned, painters in particular were attracted here, drawn to the clear air and soft light. Marc Chagall and Matisse have dedicated museums and many other significant works are on display in the Musée des Beaux-Arts (some good views from in here too). You definitely need your walking shoes for Nice. 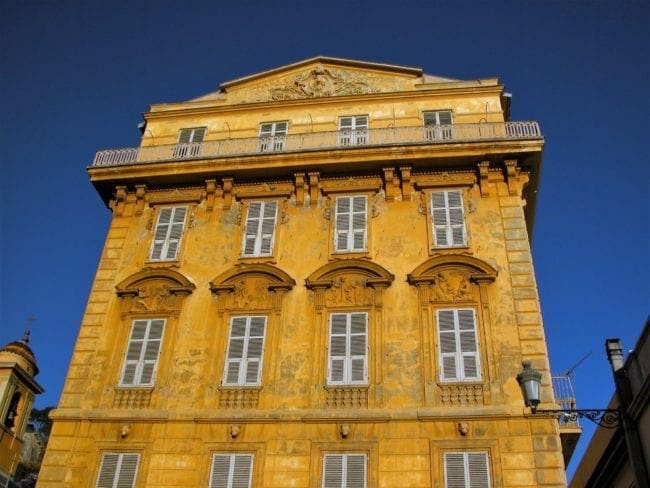 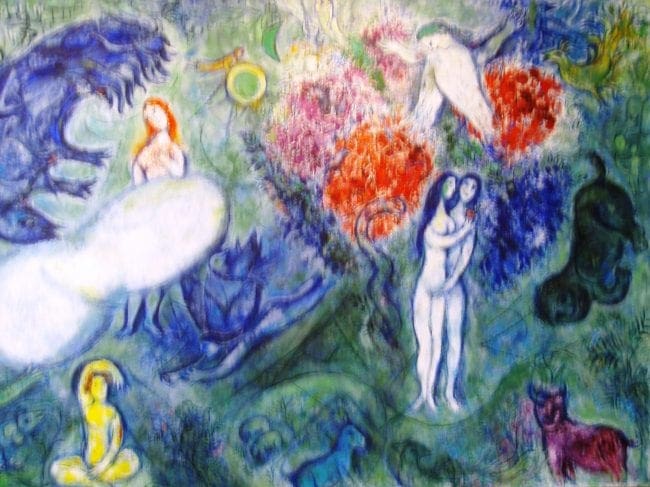 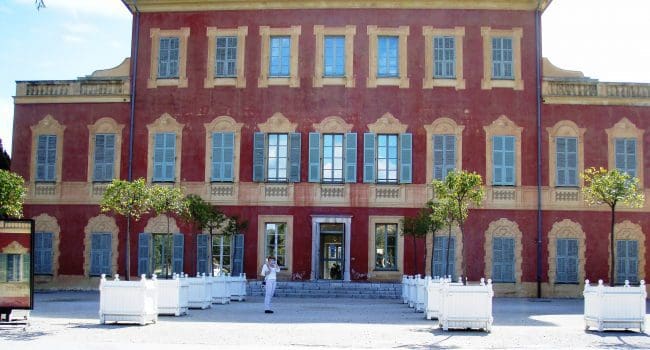 Up and Down the French Riviera - Cannes and Monaco

Nice is also really close to a host of other interesting destinations and it's easy to get around on the coastal train. To the east- Monaco - only 8 miles. (Read about Monaco on a different post - it's a separate country.)

Cannes was made famous by yet another Brit, nobleman and politician Henry Peter Brougham. He made an unplanned stop there on his way to Italy with an ailing daughter. He enjoyed it so much he bought land, built a villa, and spent all his winters there. Others followed. Then came the film festival and Cannes was made. Lovely beaches, designer boutiques and palatial hotels. This is definitely a place for the wealthy, Or the day-tripper who brings their own sandwiches.

If you can tear yourself away from the people watching on the palm lined Promenade de la Croisette you can visit Le Suquet, the old town, up the hill. There's a fortified tower and the Musée des Explorations du monde, housed in the Chapelle Sainte-Anne. 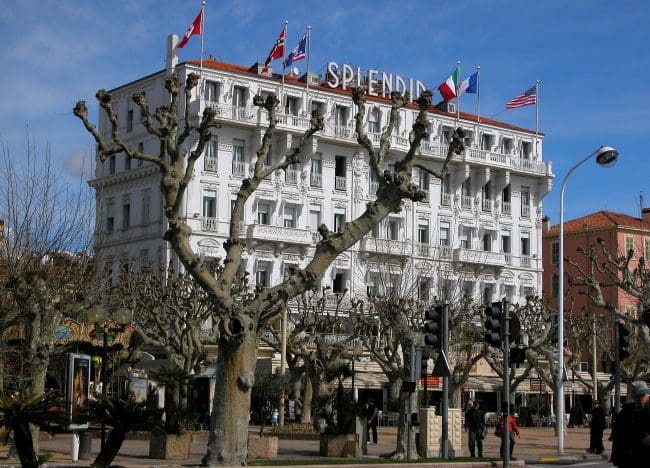 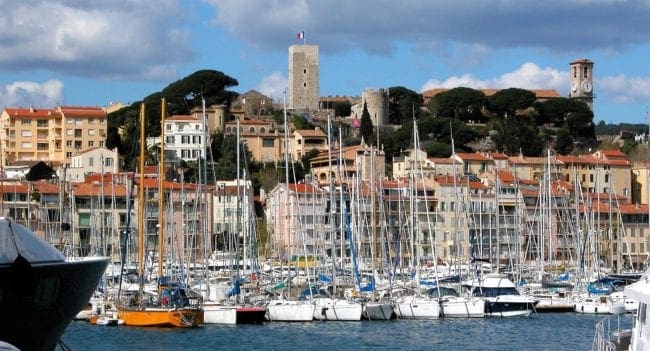 Robert Louis Stevenson was yet another nineteenth century British visitor who came to the French Riviera for his health. But he chose Hyeres, where he rented a villa called La Solitude and wrote much of A Child's Garden of Verses. "Happy (said I); I was only happy once; that was at Hyeres". It might historically have been beloved of the British (and Americans like Edith Wharton) but 70% of today's tourists are French.

According to Wikipedia, Hyeres is the oldest resort on the French Riviera (as defined by Highsmith). As opposed to town I assume. The first reference to the town Hyeres dates from 963. The area is ideal for the cultivation of palm trees. About 100,000 trees are exported from here each year. 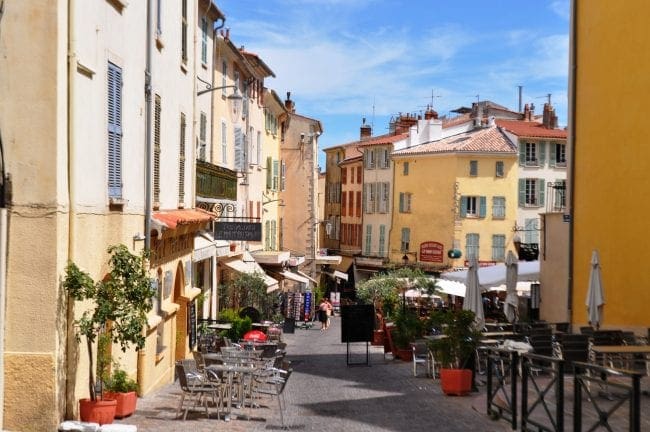 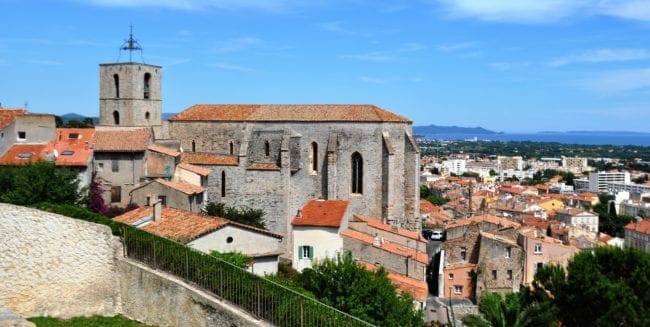 I visited Hyeres by train, change at Paris, (taxi across the city) and then south, through Toulon. This time to stay with friend Irene who owned a bijou flat close to the waterfront. And I mean bijou. The bed folded up against the wall during the day. But who can complain when there’s so much to see and do on the doorstep?

The hillside old town is two and a half miles inland. It features the remains of a medieval castle, Saint Bernard, and three different rings of centuries old town walls. There’s also the modernist arts centre, Villa Noailles, set in a 1920s building with gardens. It tells the story of the family, who were big patrons of the many local artists. Lower down, the imposing Knights Templar Tower, It is the only remnant of the Knights Templar castle Originally it housed a chapel - now the restored building acts as an exhibition hall. 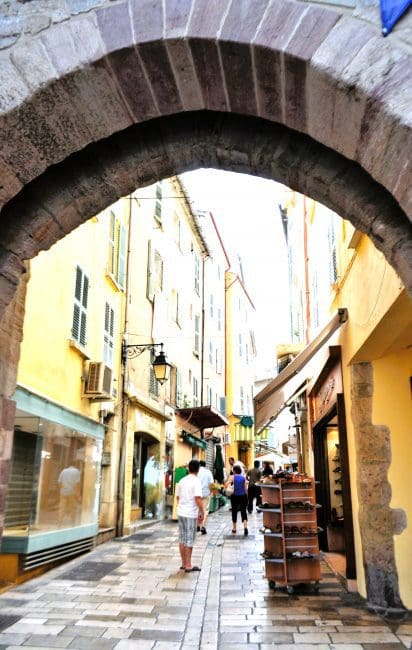 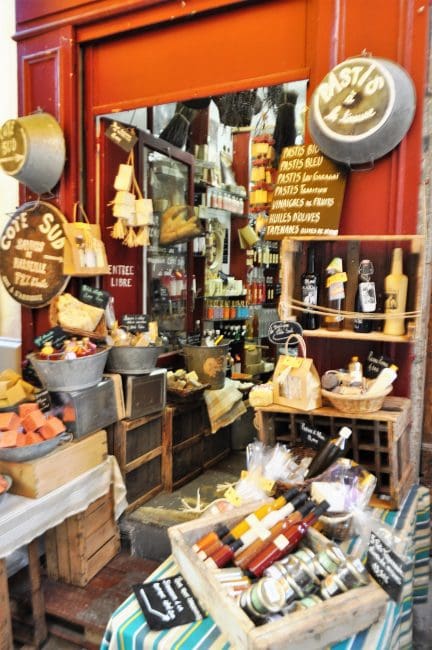 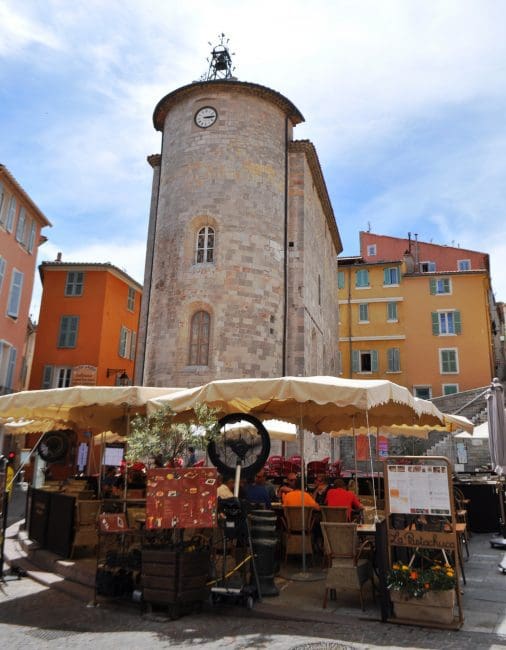 As so often, the main attraction in Hyeres, is wandering the narrow streets, popping in and out of the artisan shops (this is Provence after all) and imbibing at one of the 17 wineries. Market day is known for featuring local cut flowers.

Between the old town and the sea lies the pine-covered hill of Costebelle, which overlooks the peninsula of Giens. Salt marshes here are home to flocks of waterbirds. There’s the marina area – more eateries and then, just offshore, the Golden Isles. The three islands of the Îles d'Hyères (Porquerolles, Port-Cros, and the Île du Levant) are just offshore. This is the place to go if you want a lovely beach, but you have to catch the ferry. And if you’re bored after all of that, there are the four parks - The Remarkable Gardens. 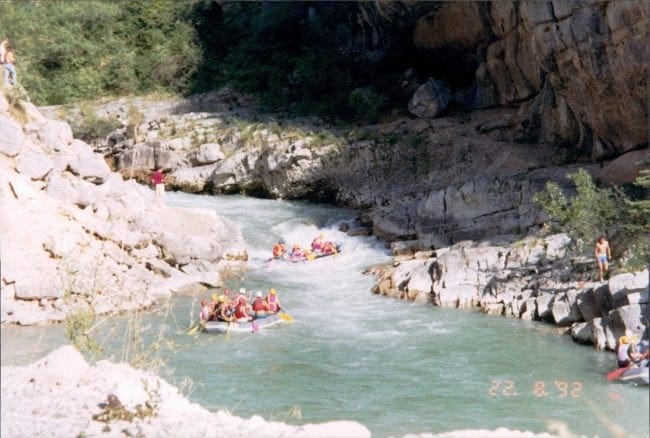 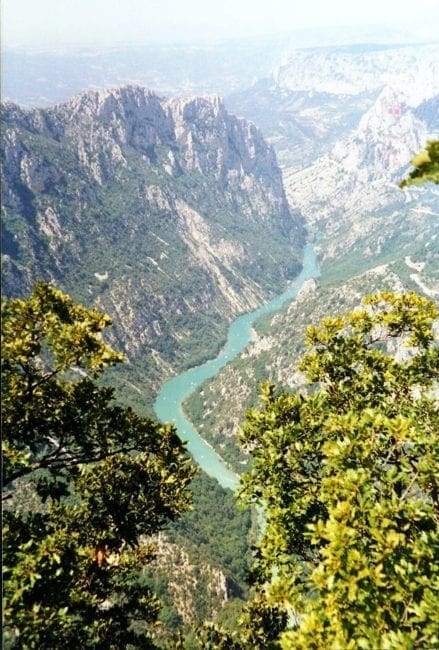 I don't suppose the Verdon Gorge counts as being part of the French Riviera, even if we use the loosest definition. but it is in glorious Provence. And I discovered it, meandering through purple lavender fields, on the way back home from Italy. This river gorge, the French answer to the Grand Canyon, is over 15 miles long and has cliffs 700 metres high, carved by the Verdon River. It may be the largest canyon in Europe, depending on which source you choose to believe. I'm willing to accept it is the most beautiful. It empties into an artificial lake and is a magnet for thrill seekers, with its white water rapids. It took a day to drive around the rim and take in all the panoramas, the turquoise ribbon far below, the shrieking rafters, from the various vantage points.