I'm travelling one of the great classic overland routes: Victoria Falls in Zimbabwe to Cape Town, through Botswana and Namibia in a truck. There are 12 passengers and I'm going to be sharing with Liz. I swore I was never camping again, but the trip dossier says that the drivers put our tents up for us.

Botswana is very flat, mainly Kalahari Desert, with most of the remainder taken up by the Okavango Delta. Modern-day humans first inhabited the country over 200,000 years ago. For the most part, the eventual settlers were the Tswana (hence Botswana), descended from Bantu-speaking tribes. In 1885, the British colonised the area, anxious about German influence in the area and wanting to preserve routes north from the Cape. They declared a protectorate called Bechuanaland.

Bechuanaland became independent, as Botswana, in 1966. Since then, it has been a representative republic, with a consistent record of uninterrupted democratic elections and the lowest perceived corruption ranking in Africa since at least 1998. Botswana is one of the most sparsely populated countries in the world and it was one of the poorest too, but the GDP has improved very rapidly over recent years - mining (Botswana is the world's biggest diamond producing country), cattle and tourism. Both the Kalahari and the Delta (during the seasonal floods) are home to a multitude of wildlife. It sounds promising. 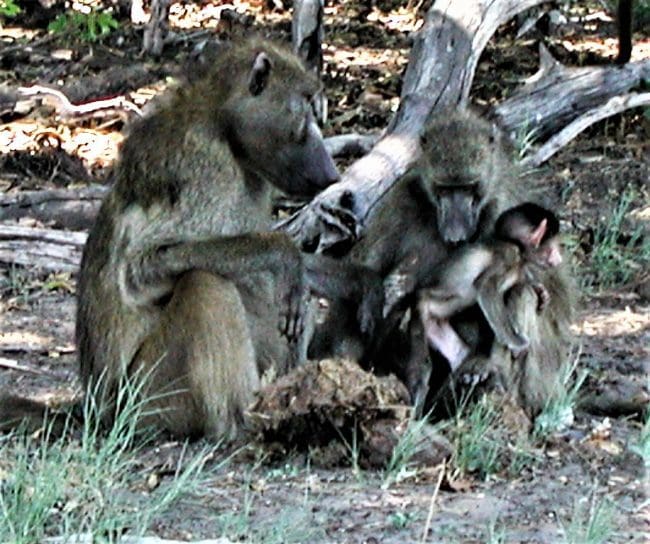 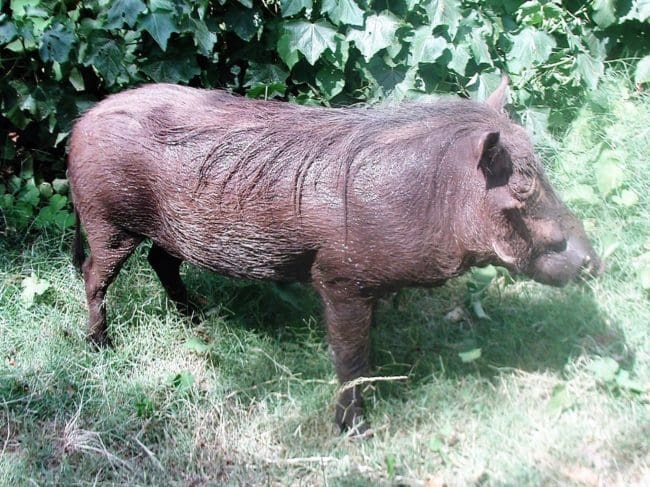 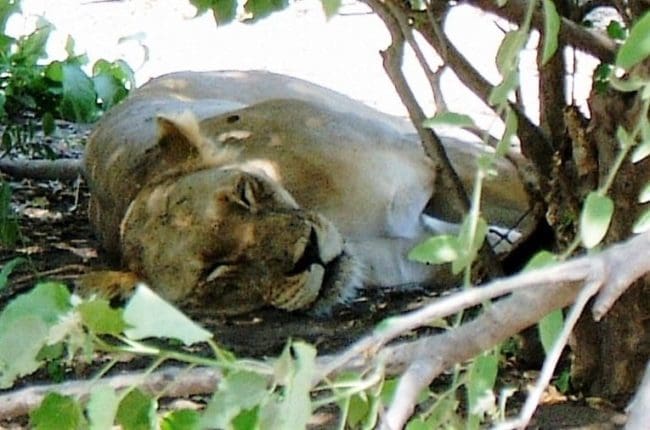 We navigate the perimeter of the Caprivi Strip, a strange elongated finger of Namibia, to Chobe Game Park in Botswana. The park is famous for vast herds of elephants and it doesn’t disappoint. They are giant enough to fill the camera frame without a zoom and there are grey specks of elephants as far as the eye can see across the savannah. These are Kalahari elephants, the largest of them all. There are also elephant hunting lions (calves and weaklings), Cape buffalo, rhinoceros (both black and white), warthog, kudu, impala, zebra, hyenas, hippos, crocodiles, baboons and wildebeest. This is possibly the greatest concentration of wildlife in Africa.

On the Chobe River

As well as game drives we get a boat trip on the Chobe River. Here's a chance to really eyeball the hippos. 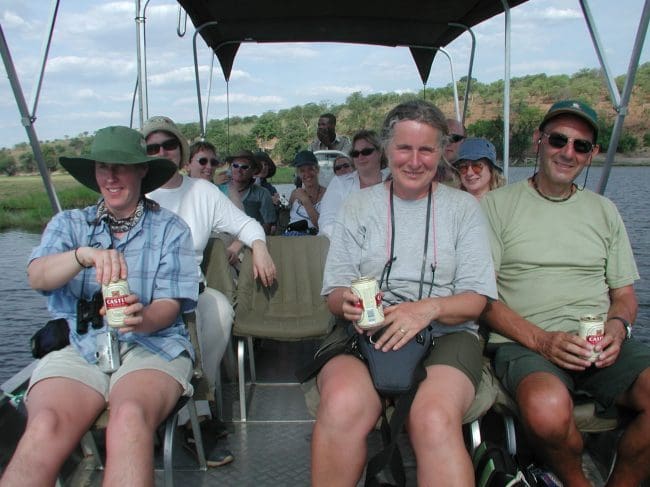 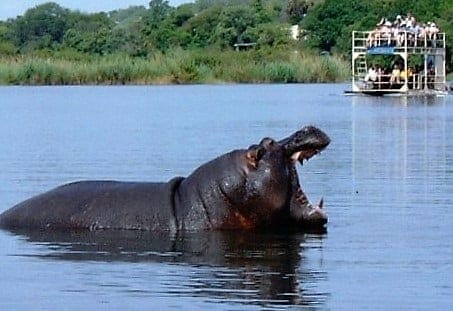 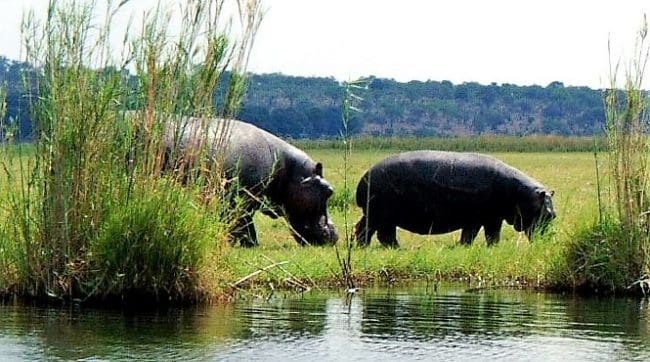 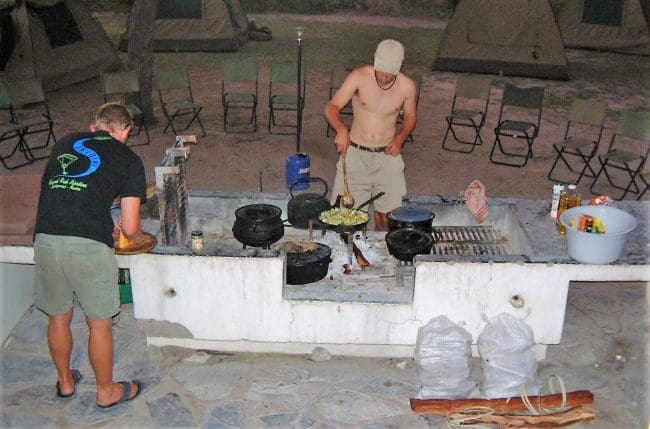 An Eclipse in Botswana

I signed up for this trip because it featured an eclipse and I loved the atmosphere of the one in Cornwall in 2000. We pitch up to a clearing in the middle of the bush and get a brilliant clear view. It lasts from 7.05 to 8.20. We all pose for photos in our eclipse tour T-shirts - which we have been made to pay for. On to Maun and a laze by the pool, which we share with a herd of goats.. 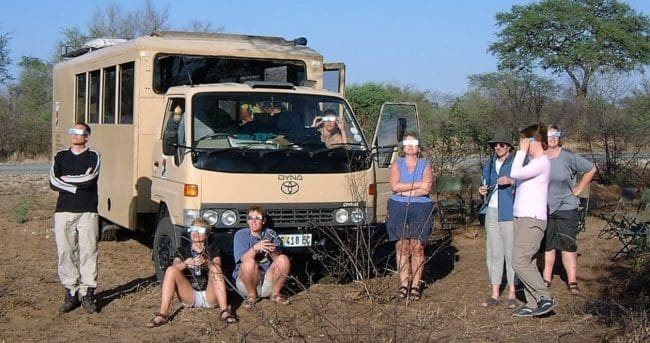 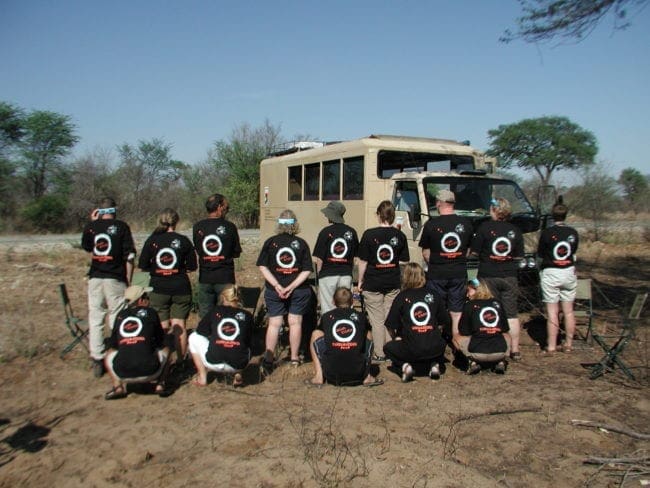 Next onto the renowned Okavango Delta, a vast and swampy inland river delta in northern Botswana (when it's the wet season). Here, the Okavango River runs into what's called a tectonic trough. There's no way out. The water just eventually evaporates.

We are punted past hippos, elephants and crocodiles in dug out canoes (called mokoros); giraffe and warthogs cavort. Even when there is no wildlife to spot, it’s extraordinarily relaxing laying back and peering through the waving papyrus fronds. I think that all I need is a fan and some grapes. Maybe, it’s not as relaxing for Andy and Deb who manage to capsize their boat. Going solo has its advantages at times.

The local villagers, who make their living from us tourists, are very friendly. Sundowners in the bar, to the accompaniment of the Frog Song, leading us to invent a toilet detecting compass. Namibia next. 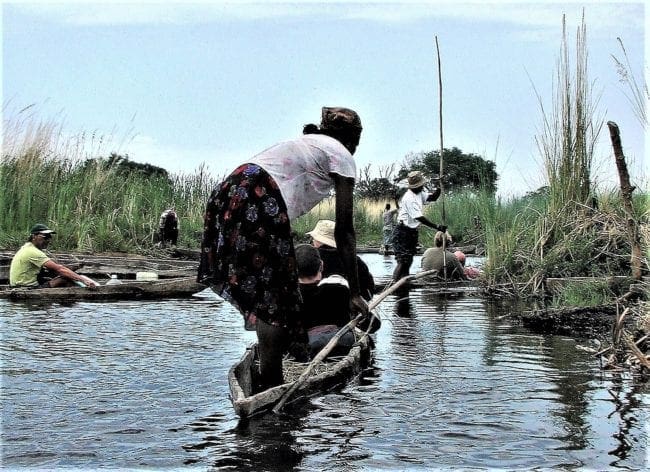 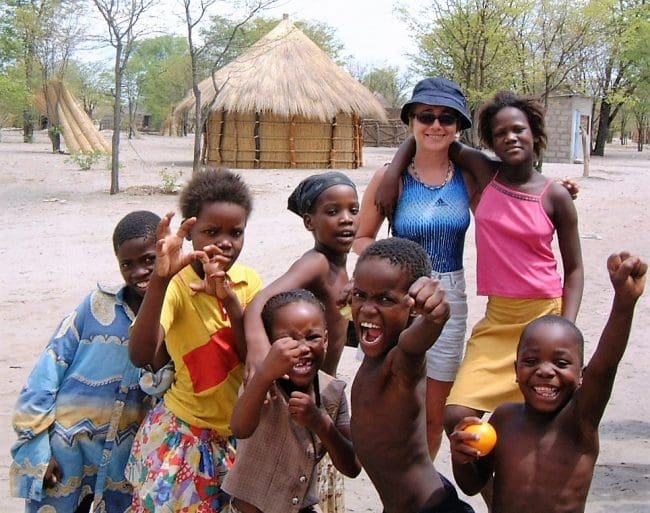 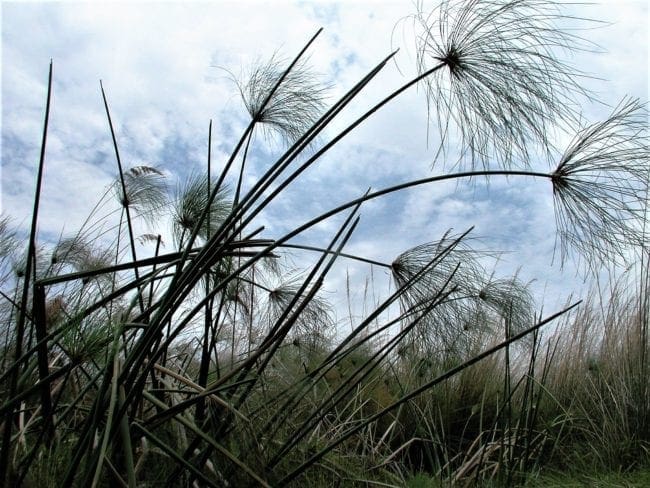 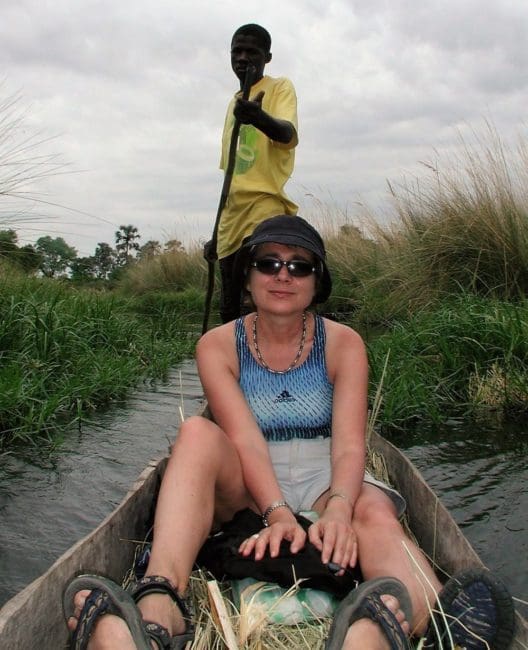