I landed at Rimini Airport this morning, from Albania. Now I'm back in Rimini, having been robbed at the bus stop as I was setting off for a day trip to San Marino. I haven’t had anything to eat all day and I had to get up at 5.30 a.m. The bank still hasn’t called to sort me out moneywise, so here we go again, a round of calling Visa and Santander. And another. The response is pretty awful. Surely this constitutes an emergency? Have they no idea what it’s like to be penniless and alone? The hotel receptionist refuses to let me have any food. Hurray - I’ve found a packet of biscuits on the breakfast bar.

When I finally get a call to say I can fetch my money I can now see that the area round the station and hotel are very different to the rest of town, which is tidy and elegant. There’s a large Afro-Arab sector with bazaar type shops. I take a kebab back to my room in the interest of saving money, as well as satisfying my hunger. The hotel lift is out of order. I’m being dive bombed by mosquitoes and there isn’t any air conditioning. Time for bed.

I’m very tempted to hop on the first train out of town. Rimini has left a bad taste in my mouth, but the guidebooks say that there are sights to be seen and so I set off to find them. I’m glad I did.  I head to the water first. From the air it looked as if the whole of the nine mile beach was concealed by rows of sunbeds and it is. The sand is powdery and lovely, though just about every inch of it is covered by money making enterprises. It really is a sea of umbrellas, stretching in every direction.

The beach is lined with pastel coloured five or six storey hotels, nothing too huge. There are a few free stretches where you can set up your own gear and there is a mandatory five metre stretch along the high-water line where anyone can stroll and swim. And it’s a pleasant stroll following the sea breeze, as it’s already gearing up to sizzling again. 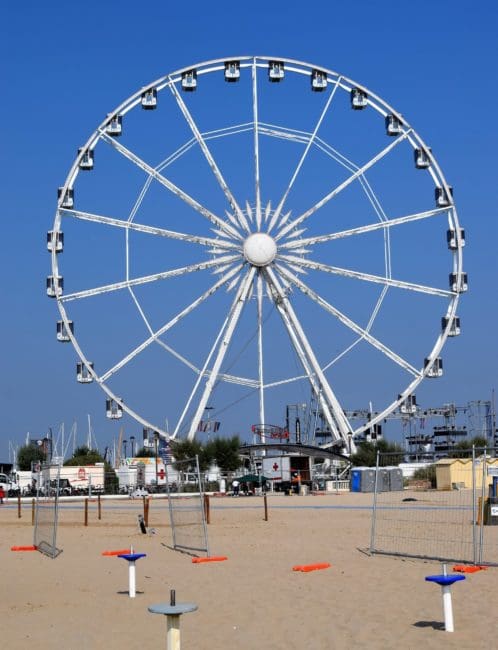 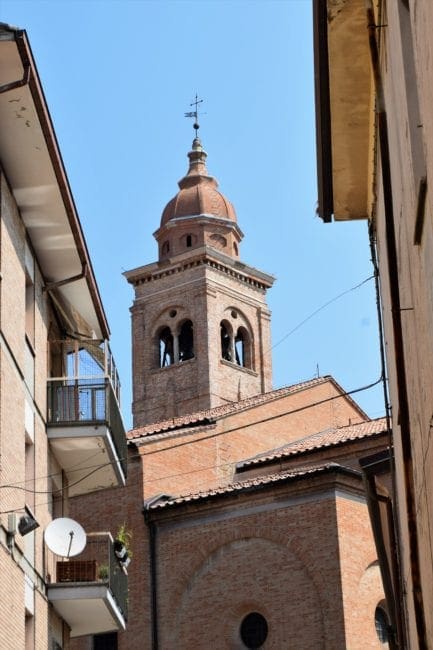 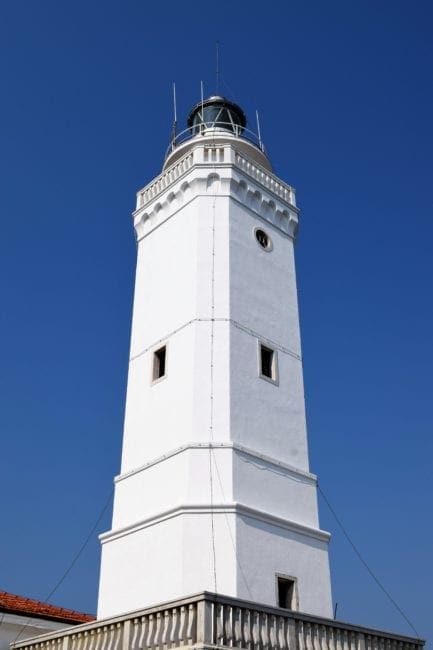 I wander along to the port and alongside the narrowing canal mouth, lined with little yachts and dinghies. They are setting up for a huge parade and street concert tonight, hefting hundreds of enormous speakers off some of the boats. It’s going to be very loud. I’m glad I won’t be here.

It’s a rewarding walk. The bridges are decorated with banks of scarlet and white flowers and even the graffiti (that must be the right word for it here) is scenically reflected in the still water. A man stops me to tell me ‘You have beautiful eyes’ in Italian. ‘Bellissimo - capisce?’ Even I have enough Italian to understand that. Today is definitely an improvement on yesterday. 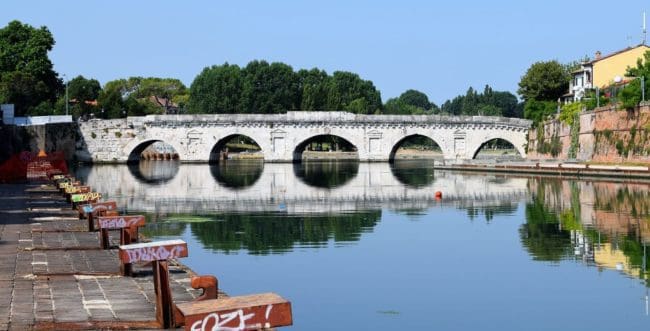 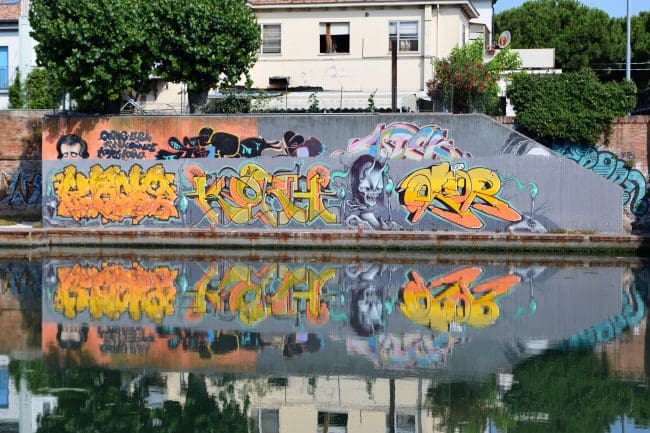 The Tempio Malatestiano was originally a thirteenth-century Gothic cathedral (San Francesco), belonging to the Franciscans. It was probably frescoed by Giotto. It takes its popular name from the Renaissance patron and nobleman, Sigismondo Pandolfo Malatesta, who hosted Leonardo da Vinci at his house. He commissioned the church's reconstruction by Leon Battista Alberti around 1450, as a mausoleum for himself (and his girlfirend). It was a contentious move. The Pope objected particularly to the 'pagan and profane' sculptures that were installed.

There are Saturday street markets strung along all the main thoroughfares, which are mostly pedestrianised, though you have to watch out for the bicycles weaving in and out. 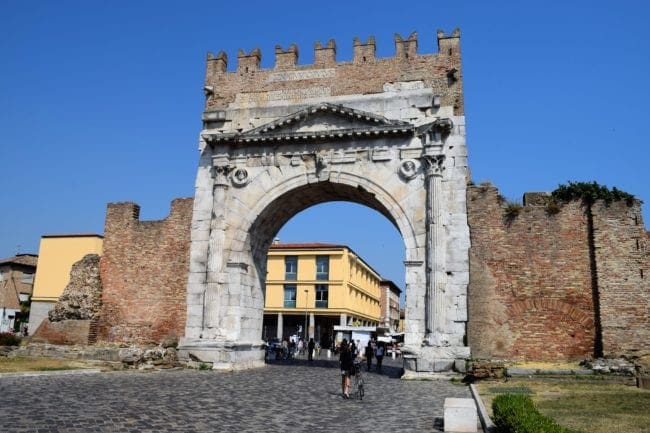 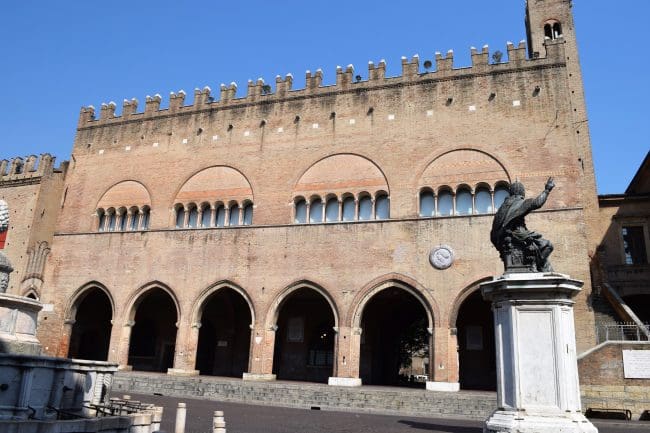 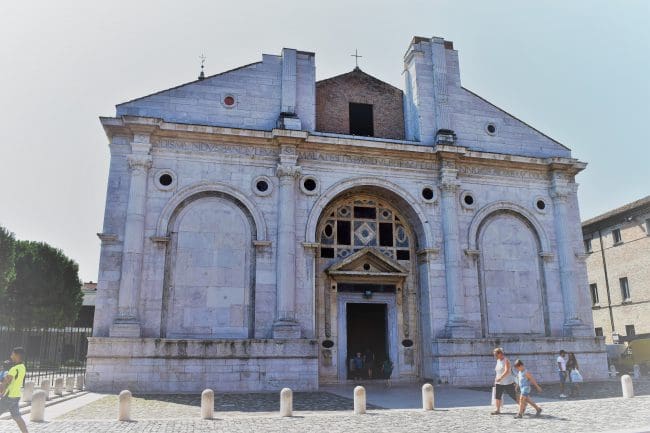 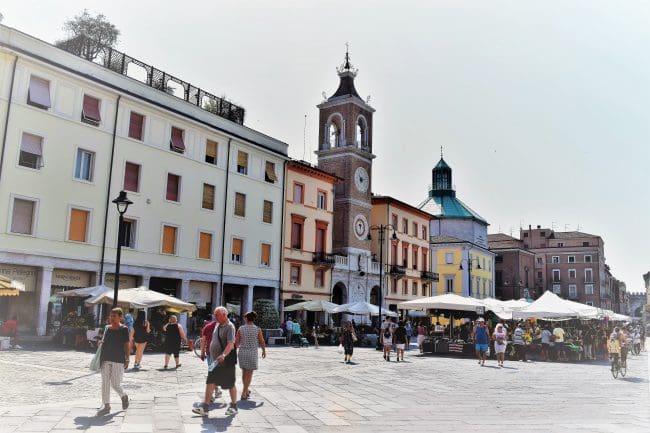 There’s also a huge modern civic building on the outskirts of Rimini, that is fronted by flagpoles carrying the flags of all the EEC nations. The flags are all waving briskly in the breeze, except for the British Union flag which hangs down limply, as it’s missing a string. That can’t be a coincidence – surely?

Another shower and out again to catch the train to Bologna. It’s five minutes late (this is not Japan) and the electronic signs tell me it is 29 degrees Celsius inside the split level carriages and we are travelling at up to 155 kilometres per hour. Most of the time it’s a lot slower than that, as it’s a stopping train, so I am hoping that I will get a better look at the scenery.

The route takes us along the Italian Riviera and right across the top of the boot to Piacenza, skirting the Apennines. There are glimpses of the Adriatico to the right, as we chug along and then rows of vines, rolling hills and little church spires as we turn west. The train is packed, the whole of Italy seems to be travelling to Bologna too. I’m glad I didn’t bring my big case. The temperature is also rising. Maybe I should have opted for the faster journey. Some teenagers are cavorting and singing. It’s just like England. 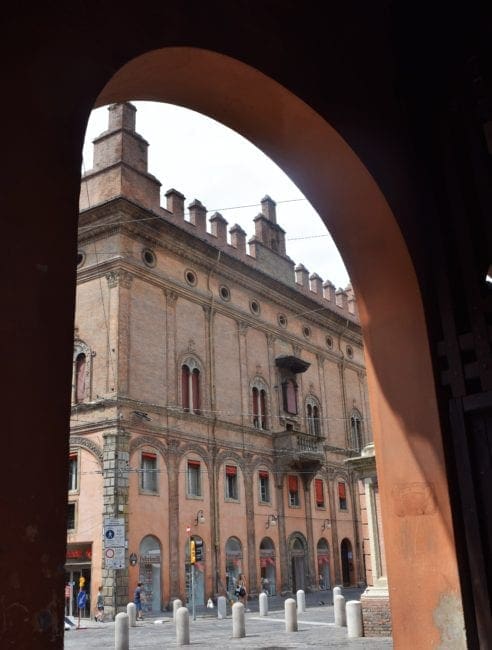 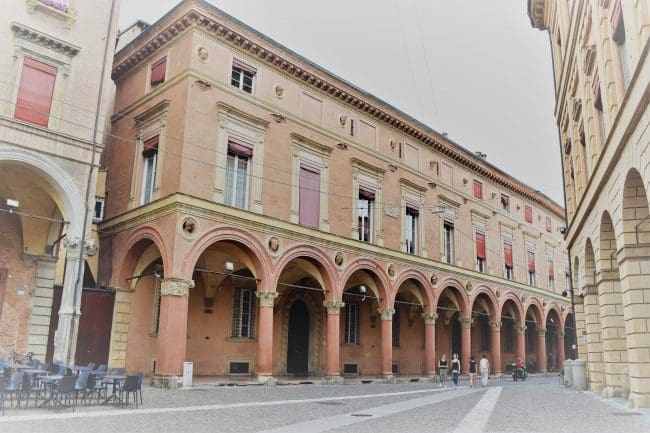 There’s a long queue waiting for a taxi at Bologna Centrale - Grandi Stazioni. And I’m still intent on conserving my cash, even though the sun is beating down, I’m already wringing wet and it’s over a mile. But it’s a pleasant and interesting walk, mainly through marble floored and shady colonnades that abut the many designer shops. Apparently there are 53 kilometres of these in the city and they’re a jolly good idea.

I only came to Bologna because the airline routing to Sicily worked best this way. Wow - it’s amazing. A glorious cornucopia of wonderful architecture. Why isn’t it on more bucket lists? Bologna is the historic capital of the Emilia-Romagna region, in northern Italy and the oldest university town in the world. (The university was founded in 1088.) It has three nicknames:  La Dotta (“the learned one”- for its famed university), La Grassa (“the fat one”- for it's cuisine), and La Rossa (“the red one”- a reference to the red rooftops throughout the city). 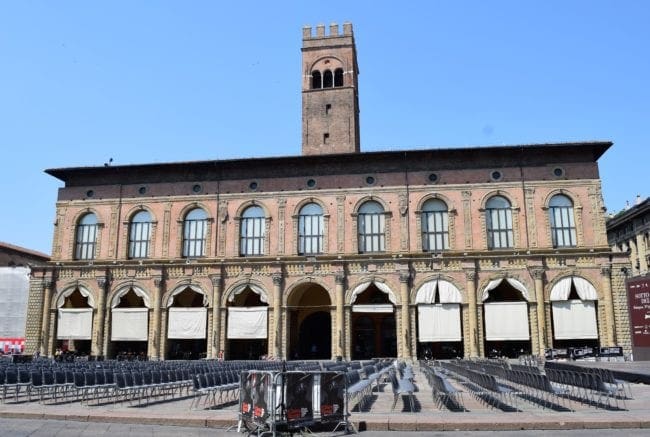 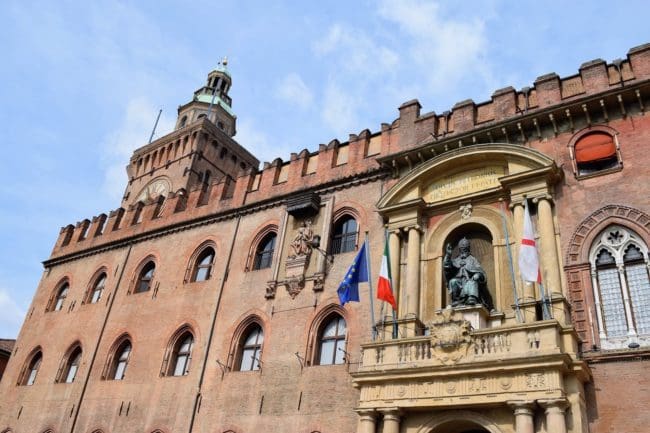 My hotel is just off the mammoth and wonderful Piazza Maggiore, lined with the usual arched colonnades, cafes and medieval and Renaissance structures, the City Hall, the Fountain of Neptune and the Basilica di San Petronio with the fascinating contrast in its unfinished brick and marble facade. The Palazzo Communale (much more evocative than City Hall) has those incredible swallowtail crenellations. I think it’s called Ghibelline style.

Just round the corner are the two towers, leaning Asinelli and Garisenda, most famous of the city’s many medieval edifices, with another dome and clock tower peeping between them. There are clouds of swallows themselves weaving around them. It’s a panoply of utterly tasteful terracotta, cream, burnt umber and yellow ochre with arches and cobbles diving off in every direction. Farrow and Ball would be proud. And everywhere you turn your gaze there’s another church tower, a dome, or a palazzo or a magnificent portico. Gates and turrets, remnants from the old city walls. The guide books say that the university side of the city, the east, has more edge. It’s definitely scruffier, more Bohemian, with street food, cheaper cafes and graffiti. The library features coats of arms belonging to elected members of the student council. 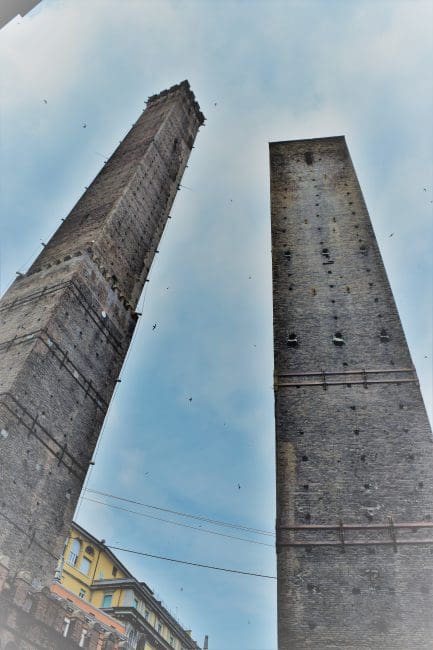 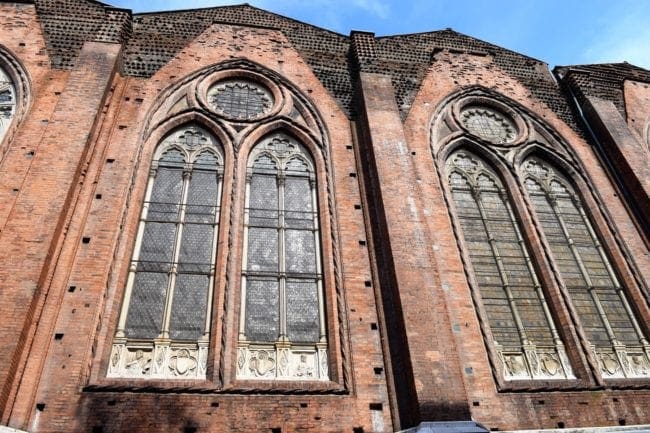 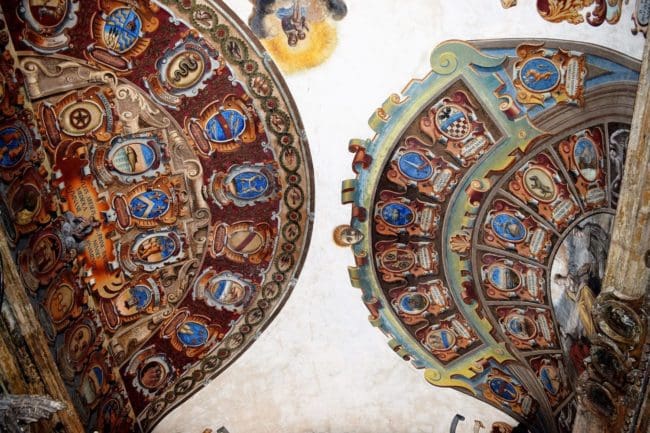 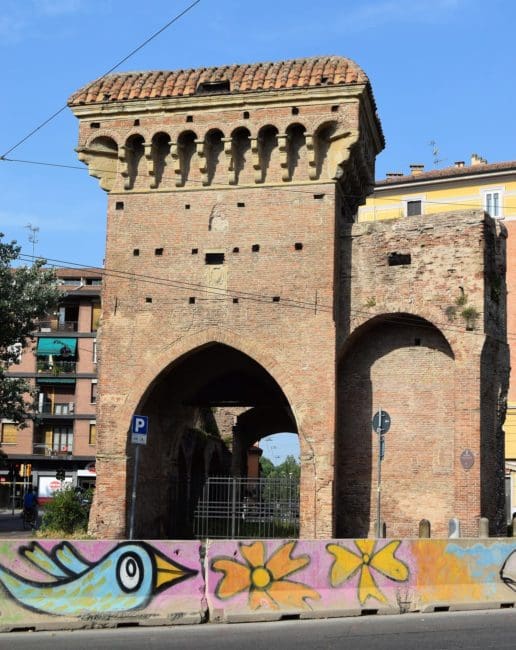 I’ve walked ten miles today in searing heat, exploring two cities and had to have four showers. Time for dinner. Italian food hasn’t hit the mark yet (though the ice cream has). Dinner is disappointing and bland, even though it’s a local (and not cheap) restaurant that has good reviews. I’m observing the locals to see if they cope with eating spaghetti bolognese any better than the English. I don’t think it’s any less messy, though they do rotate their forks very rapidly when they are hoovering it up.

It's Sunday in Bologna and most of the city is slumbering. It's still sweltering but now it's thunderstorms and driving rain. These colonnades come in really useful. Except when they run out. I'm sheltering in a doorway hoping it will ease up soon. One of the flat owners has already stuck his head out to see what I'm doing. I think I might have leaned on his doorbell. 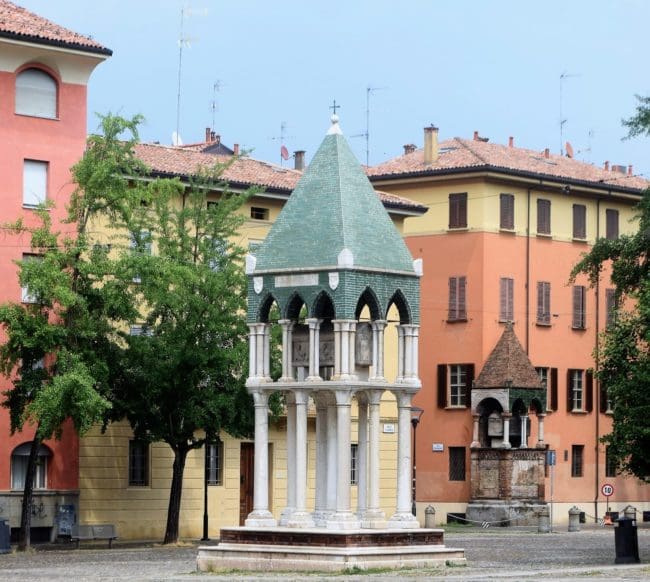 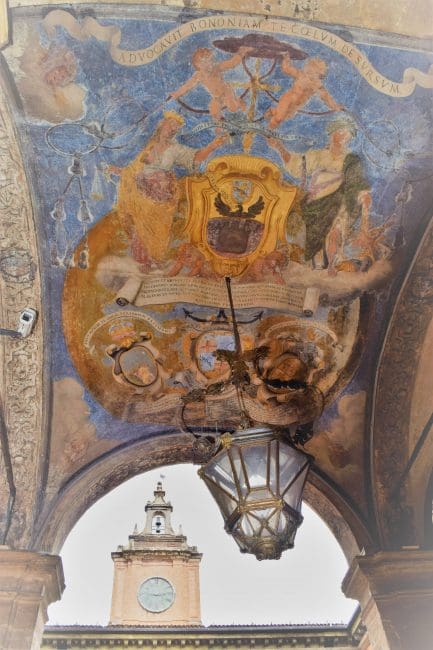 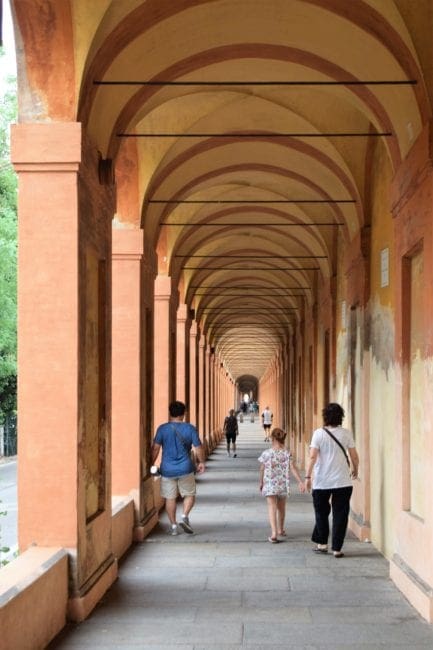 Up in time to be a proper tourist and take a toy train to the San Luca sanctuary on top of a hill outside town. It is touted as being a four kilometre climb up the hill (under colonnades of course), after traversing the five kilometres that take you outside the city proper, past the football stadium. The reward is to be stupendous views. I wasn't looking forward to the climb up but decide it will be a healthy option. So, I can't help but be relieved when the train turns up the hill and deposits us right at the top. I decide I will compensate by walking the whole way back into the centre. 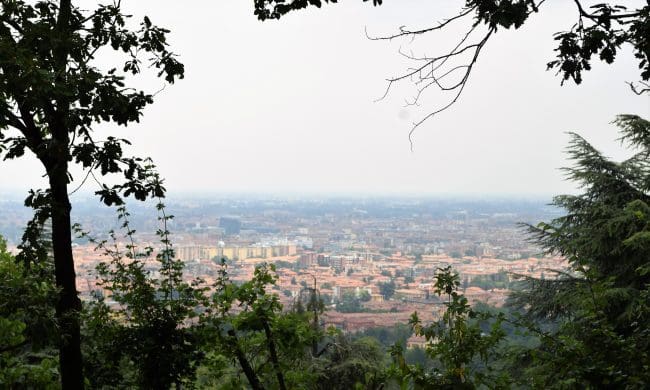 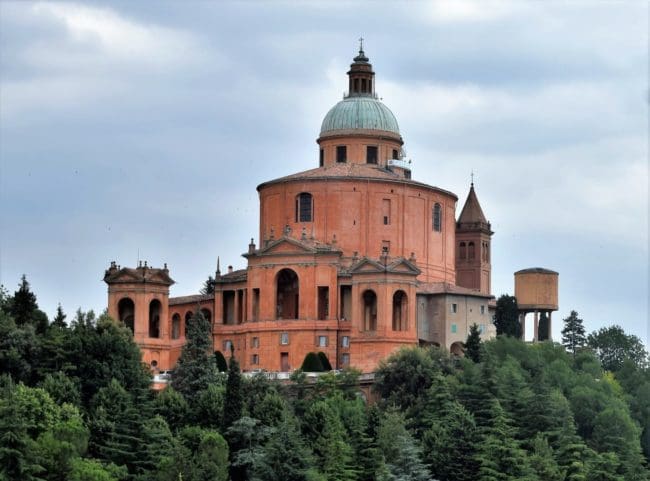 The church itself is pretty enough and the views are good, but interrupted by vegetation. There isn't a whole cityscape or view of the Apennines spread before us. So while Bologna gives even Firenze a run for its money inside the city, the much lauded views across the Arno take the prize. Through the gaps in the trees Bologna is a sea of red roofs. This explains why it's called La Rossa - it's much browner from inside up.

I'm drenched again when I get back to my hotel, but for different reasons today.