Australian residents, Alec and Alison, who I met on the train across the Caucasus last year, were going to travel on this trip to Algeria with me, but their visa paperwork never arrived back from Algiers - no real explanation - and they had to rearrange their European trip. Our trip was supposed to be a party of 13, including George the English leader and Jamie from the office in England. So now we’re down to eleven, as we assemble in the airport arrivals area. Except we’re not, as Sarah, from the UK, has not been allowed to enter the country. None of us have even seen her get off the plane. Mind you, we don’t know what she looks like. Again, no explanation given. There’s much speculation of course. A journalist? A spy? Something more mundane, like the date missing from the visa?

Unusually, we are all solo travellers, three  men and five women (two of the ladies are American, everyone else is at least part British) plus George and Jamie. Our passports have all been re-examined and collected (my own exchange with the immigration officers was very amicable), so now we’re all waiting with trepidation to see if we are to be deported too. After an hour or so we are sent on our way. All is well. Except we are now ten. It’s like an Agatha Christie novel. 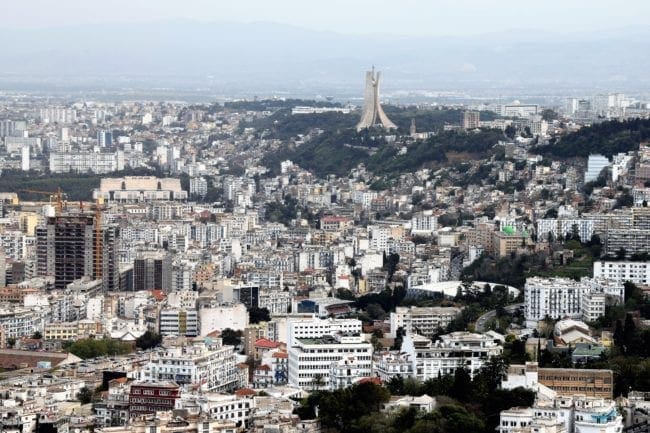 Algiers, the capital of Algeria, is a sprawling seaport with (unsurprisingly) a very French feel. Most of the buildings are white and curly balconied, dominated by a huge concrete Monument to the Martyrs and a soaring  tower (it's going to be the  tallest minaret in the world) of a new Great Mosque, under construction. The shop fascias are written in French, but there is some Arabic signage too.

Our Algerian guide, Robbie, is a dead ringer for Alan Rickman and a polyglot. He’s been to university in Plymouth, Algeria, France and Spain. He’s been at sea as an officer and has dabbled in all manner of business. So we have an extremely knowledgeable and cultured commentary, even if it is a little hard to follow at times.

The Casbah of Algiers 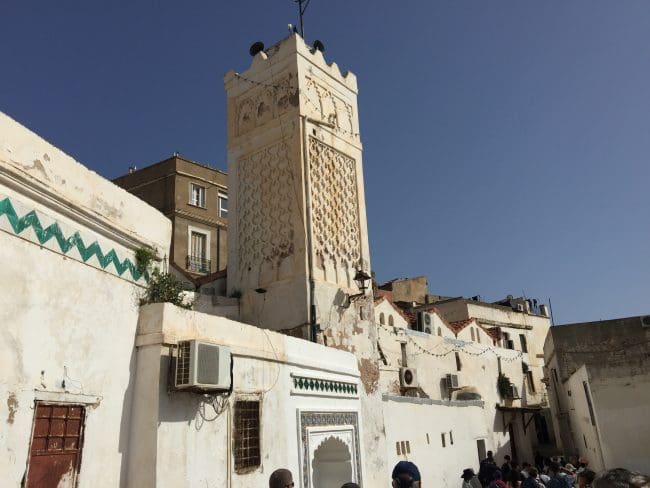 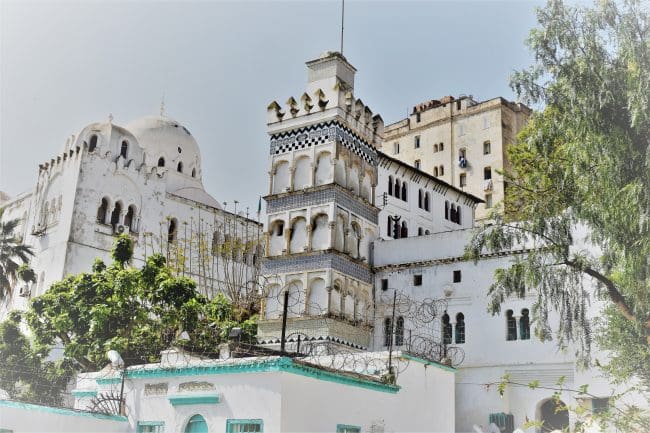 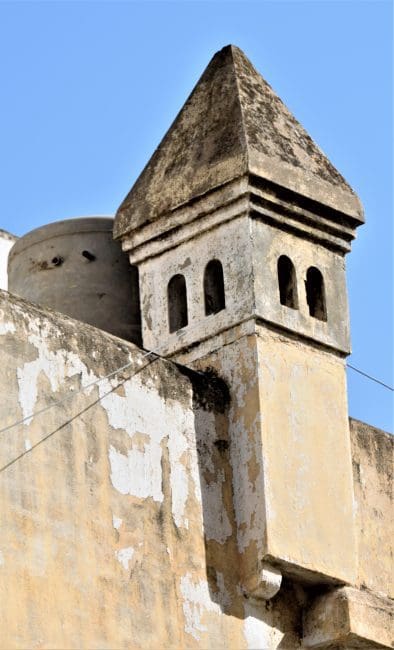 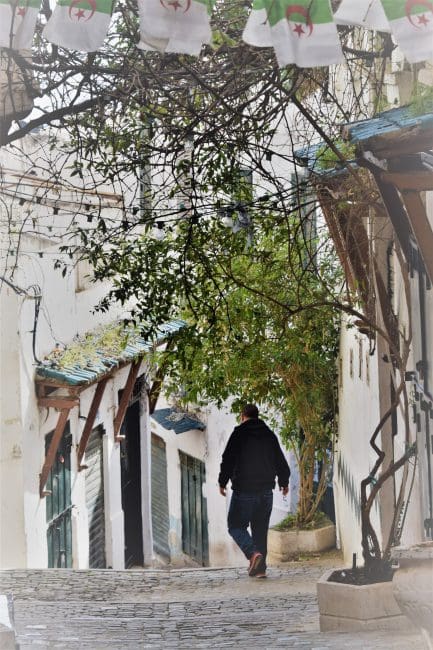 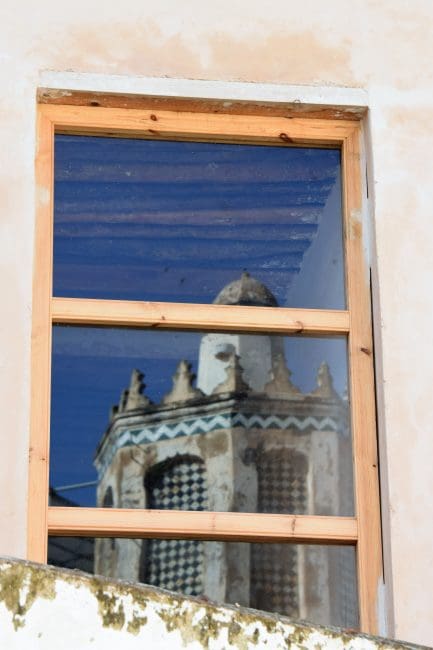 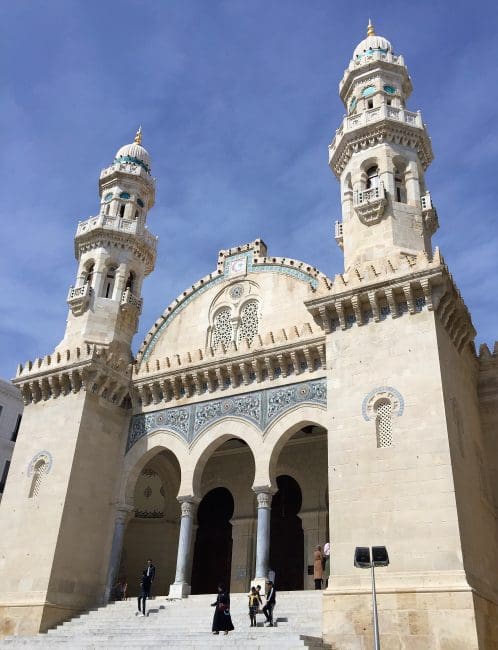 Robbie leads us on a shamble, rather than a ramble, along 500 steps, through the ancient city of the deys, The labyrinth of the casbah (reconstructed by the French). climbs the steep hill behind the modern town. It is crowned by the casbah or citadel, 122 metres above the sea. Fortunately, we're going downhill.

Algiers is situated on the west side of a bay of the Mediterranean Sea. The modern part of the city is built on the level ground by the seashore and the two quays form a triangle with the casbah. The esplanade here is reminiscent of Brighton (if you squint). Past the seventeenth century whitewashed Kipouache Mosque, with its two towers, to the famous ornate post office (now a museum). The route back to the hotel takes us along the Algerian boulevard equivalent of Oxford Street. Then, through various vibrant squares and by the renovated Milk Bar, notorious for being bombed twice by terrorists. Robbie ambles along in front talking mainly to himself, while George and assistant Mohammed mop up the stragglers. 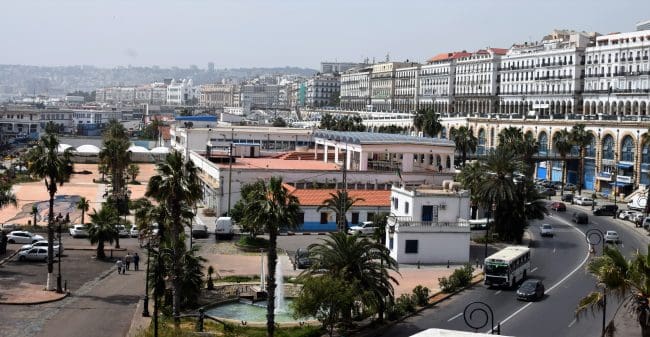 We stop for a bracing  al fresco lunch, in the botanical garden, on high ground, next to the zoo. We can see right across town from here and a prized exhibit is the huge fig tree that featured in the Johnny Weissmuller version of Tarzan. Crocodiles of small children snake around, their teachers dancing and chanting. 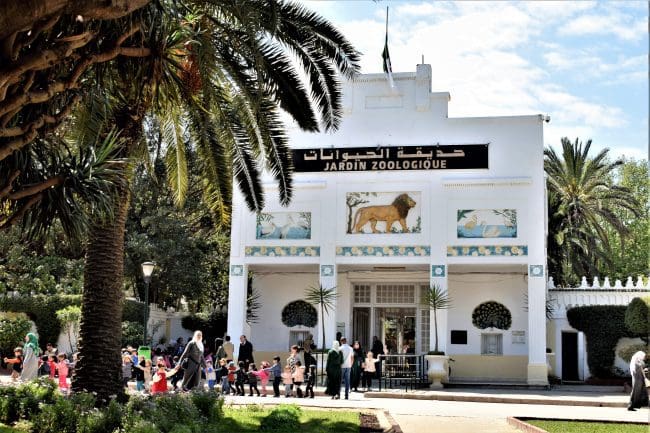 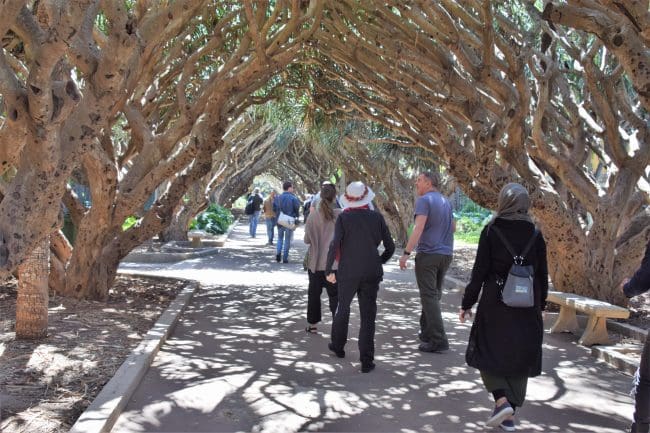 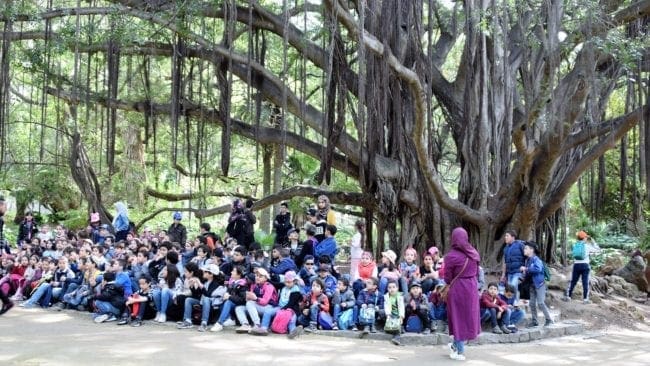 The Cathedral of Notre-Dame d'Afrique

In the west, there’s another stop to look across from the far side of town, on a clifftop terrace, surrounding the imposing Catholic basilica of Notre-Dame d'Afrique. It’s a fascinating mix of European and eastern orthodox architecture, grandly described as Byzantine revival. It features a large silver dome and mosaics.

The traffic is terrible and we’re moving at a crawl, so we’re spending more time in the bus than off it. That’s not a problem. Everyone is sleepy, due to our early start, and the bus resonates to the sound of gentle snoring. I’ve enjoyed the views, but I haven’t the slightest idea how to find my way anywhere. And at least I can find out about what I’ve seen by reading my guide book 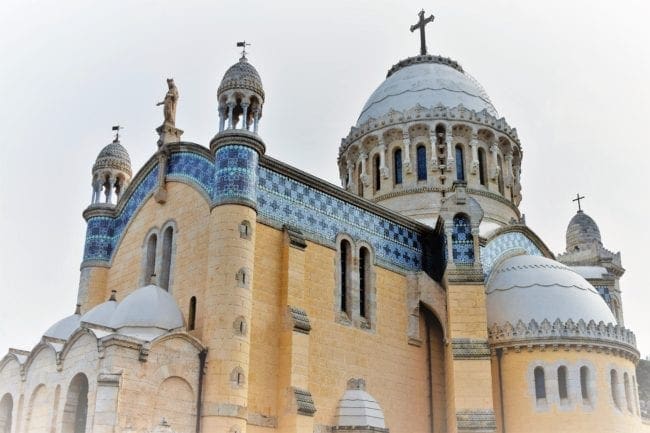 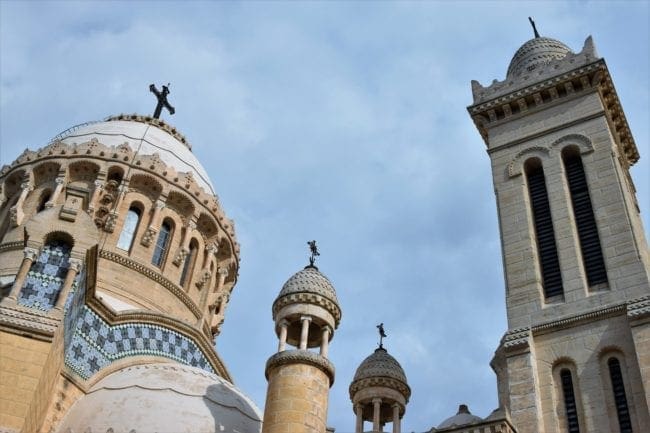 Eating and Drinking in Algiers

Dinner on our first night is a riot. We’ve found a restaurant that serves alcohol, and gin and tonic to boot. What’s more, the sole and lamb is excellent too. Guide Robbie hits the whisky and Martin, one of the three guys, (who have formed a lad’s alliance –I’ve dubbed it the Northern Powerhouse), is on good form. He’s already gained an admirable reputation for awful risqué conversation and really bad puns.

Robbie’s notion of a suitable restaurant for our final meal is a sleazy smoke filled bistro, with scantily dressed women. We escape to buy ice creams, balancing our cartons of ice bubble, as we make our way back to the hotel down the illuminated streets. It’s a lively city, with a shabby chic charm. So, it's a good place to begin and end a tour in a diverse and intriguing country. In between we've been along the coast in each direction to Constantine and Oran/Tipaza and out into the Algerian Sahara.