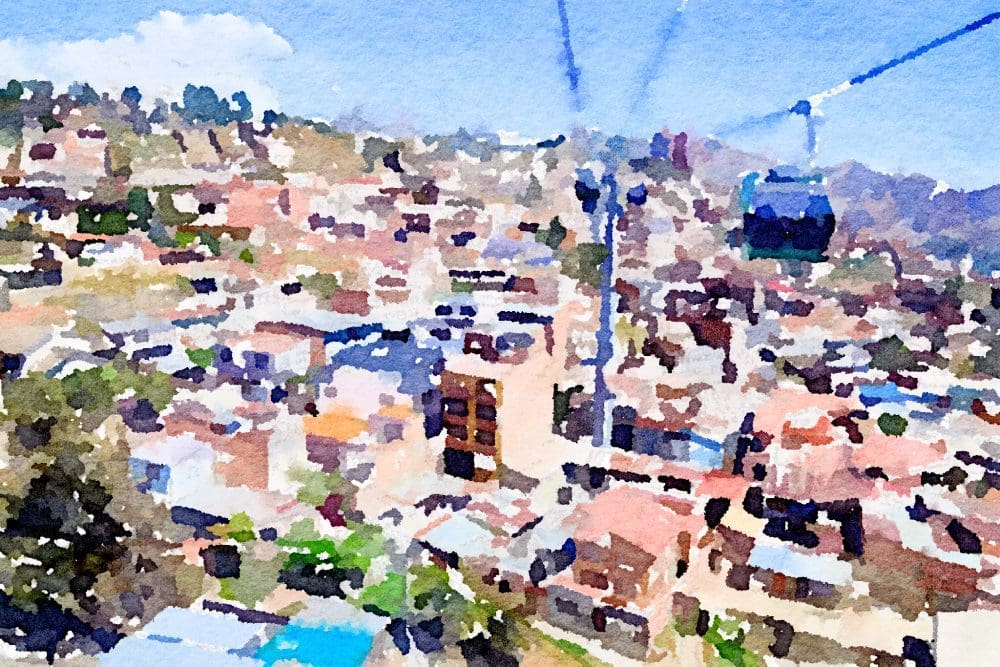 La Paz is arguably the capital of Bolivia – the government is located here, but Sucre is the constitutional capital. La Paz is also arguably the highest capital city in the world (if it is the capital). Lhasa is 58 metres higher, but Tibet is an ‘autonomous’ region of China. Whatever, it’s scenically situated in a steep-sided bowl lined with a sprawl of adobe and red-brick buildings and framed by more white tipped mountains.

Rodrigo meets me off my flight from Uyuni to La Paz. He is dapper, with a straw trilby and speaks English, French, German and Spanish fluently. I’m expecting to have a quiet day, with a chance to catch up and rest. However, Rodrigo informs me that I’m touring the city today, as there’s a national protest against Evo Morales’ proposed fourth term called for tomorrow and all the main roads will be blocked. Rodrigo is more philosophical about Morales than Oswaldo. Yes, he’s gone a little crazy, but he’s done so many good things. The country is much more prosperous and homogenous. And Morales doesn’t mind if people criticise him. Rodrigo says that Bolivia has the world record for presidential coups, 120 of them. There were three presidents in one day in the early twentieth century.

La Paz is hardly recognizable from the city I visited 18 years ago. It’s still a jumble of buildings sprawling scenically across a great canyon, ringed by the snow-capped Andes, and the traffic is still awful. But it’s clean and organised and there are modern buildings spinning up everywhere. Nothing like the dirty ramshackle streets I remember. And some genius has solved the pedestrian transport problem by building a colour coded metro system of cable cars, interlinking and whizzing up and down the valleys.

We wind down pastel coloured, restored colonial streets and the ethnography museum. Then, the Murillo Plaza for the presidential palace and parliament building. It’s really lively, a cross-section of Bolivian life sitting on the steps chatting, or in the case of the younger generation, chasing the pigeons. It’s fascinating to see how European dress has become the norm here. Many of the city ladies don skirts with layered petticoats, topped with blouses and woolly cardigans. Atop are bowler hats worn jauntily askew. They adopted the hat wearing habit from the railway workers of the 1930s. Oswaldo takes me into a shop to explain and compels me to try the look. It's not my finest hour.

The famous Witches' Market is a fascinating (and creepy) hotch-potch of weird items: spell boxes, amulets, lotions and potions, aphrodisiacs, snakes, dried frogs, turtles, feathers and armadillos. Presiding over this hocus pocus are the ladies of La Paz in their scarves and bowler hats. Also wandering the labyrinth of stalls are the distinctively woolly capped Yatiri or witch doctors, who can solve your health problems and tell your fortune.

This area is unrecognisable since my last visit, having been substantially upgraded from the chaotic. There are now lines of neat booths, packed with jars, teas, coca leaves, idols of varying sizes, and heaps of lurid coloured rocks. These face (incongruously) a row of football gear shops. In many cases medicament stock has expanded to include souvenirs, as well as items from all continents, such as joss sticks and Chinese lucky cats, to cover all bets. There’s even a brand-new gallery. Not everything has changed though. You can still have a consultation with a shaman or witch or choose from a pungent smelling assortment of herbs and powders and most of the shops still have llama foetuses dangling from the ceiling (essential for the foundations of new buildings) .

We finish at the cathedral, on another vibrant plaza. My hotel is, conveniently, just around the corner. Llama steak for supper.

Last time I was here, with Eileen, (coming from Peru) we decided to opt out of the cycle ride down the deadliest road in the world, but other excursions were on offer. I met an archaeologist, in a bar, so on his recommendation, we embarked on a half-day tour to the Tiwanaku Archaeological Site, where he was excavating. The Tiwanaku Empire was a pre-Incan civilisation (200BC), inhabiting both the Bolivian and Peruvian sides of Lake Titicaca. There are miniature pyramids, temples and a gate, dotted with stone faces and mysterious carvings. Much of the work is still underway and we have to peer at these wonders through barbed wire.

And again, this time with Rodrigo, I drive out to Moon Valley. Valle de la Luna is about 10 kilometers from downtown La Paz. Here erosion has worn away the mountainous clay to leave as series of tall pinnacles. There are two walks through the park, with a small amount of scrambling over bridges and boardwalks. The spires are close knit and tower overhead. It's a little reminiscent of Bryce Canyon in the USA , but it's an inferior and smaller version. The mineral content is said to create a variety of hues, but today most of them are literally, plain beige. And sadly, it doesn't compare well with the Chilean version, I've just seen either. But I don't feel too bad writing this - as I've raved about so much of this Bolivian journey.

We then  zip back across town on the green and yellow cable car lines. Here there’s a great view of the new and old, teetering on the cliff tops.

My ‘boutique’ hotel is in a traditional converted house, with brick walls and gabled ceilings. I’m in Room 101, which is living up to its name. It faces out onto a central corridor, as does its only window. This is cloth covered and too dark during the day and too bright at night, especially as the passage light comes on every time someone walks past.

I’m not sure that my disturbed night entirely accounts for the racing heart, shivering and dizziness when I finally get up. I peek outside, at the riot police, grouped by the plaza, plastic shields raised, but I have to go back to bed. Altitude sickness seems to have set in. The hotel, not missing a trick (well it is next to the witches’ market), has provided Diamox in the room, at two US dollars a pop. The chemist next door sells 8 for 45 Boliviano (about £5). And I’m also throwing caution to the winds and adopting Wilson’s approach to coca leaves.

I can hear chanting and a few firecrackers outside, but nothing that suggests a revolution is taking place.

I’ve had an unwelcome message from Rodrigo. We have to leave earlier than planned, at 5 a.m. in case the roads are still difficult. In the event we have a very smooth passage and I’m at the airport with plenty of time to sit in the café. I’m still not feeling great. And the plane doesn’t take off until three passengers have volunteered (suitably bribed) to disembark and fly tomorrow. We’re overweight and the plane won’t be able to get over the mountains. I’m carefully not making eye contact with the airline officials. Back to Santiago.