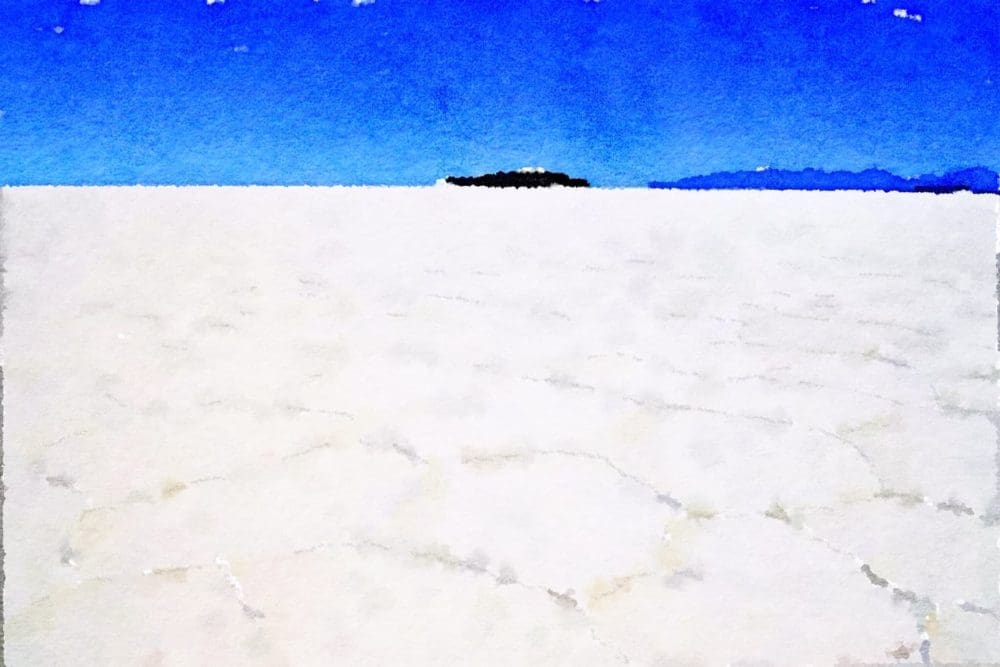 The Altiplano of Bolivia

The border post at Bolivia, coming from Chile, is unprepossessing to say the least. It’s a small hut with a long winding queue of increasingly disgruntled tourists, furiously arguing because they are being made to pay an unexpected exit fee. It's operated by a single man, who sits at one desk, complete with stand-up sign, to count his takings and another, to stamp passports. I’ve also gone back an hour in time, which I don’t understand at all, when I’m travelling east. I’m sure there’s some logic to it somewhere.

It’s 400 kilometres to Uyuni. These are Bolivian kilometres, very different to European kilometres, explains Oswaldo, my new guide. The driver is called Wilson and he’s in charge of a Toyota Landcruiser. It’s the affordable car of choice here, where the roads are nearly all dirt, except in areas around mines, where corporate mining conglomerations have funded a surface of sorts to get their ore out. Bolivia is mineral rich, but hasn’t the resources and technology to extract the wealth it’s sitting on. It hasn’t helped that relationships with the USA have been frosty and the American companies have all pulled out, in case their assets were nationalized. Oswaldo says that President Morales has been in power too long and now he’s mad. He’s currently requesting a fourth term in office, when the law says only two are allowed. It’s an all too common story.

The Incredible Panoramas of Bolivia

The scenery however, is not at all common; it is increasingly incredible, as we climb away from Mount Licancabur, the stratovolcano on the border. The carved peaks, canyons, huge salt lakes, volcanic cones and flat, open valleys beyond are uniquely beautiful and genuinely rainbow coloured, with starkly contrasting blues, greens, purples, yellow, orange and reds. It’s vividly surreal. So surreal that part of the route is known as the Salvador Dali Desert and features in his paintings, though Oswaldo says he never came here.

Oswaldo also bemoans the fact that the beautiful lagoons are drying up, because of global warming. First, the frosted white and green lagoons, a 4500 metre high spectacle, nestling just the other side of Licancabur. Then, beyond this, Dali’s Painted Ladies of the Desert, a fantasia of peaks daubed in pinky reds, yellow ochre and black, up to the Sol Manyana (Morning Sun) hot spring geysers at 4870 metres. These are the counterpart to the amazing columns of Tatio, and the actual geysers here are diminutive in comparison. But these are just the backdrop for a raft of bubbling spitting pools, hues ranging from grey, through dusky pink, to bright orange, surrounded by a whole, exquisite artists’ palette of salt encrusted rings. Forget the mud volcanoes in Azerbaijan. These are far more impressive.

There are even some fluffy vizcachas (rabbit like rodents) slumbering in the crannies.

San Pedro had me enthralled, but Bolivia is surpassing the Chilean Atacama. This is a delightful day of continuing surprises, one of the most amazing journeys I have undertaken. The highlight is yet to come. The Laguna Colorado (Red Lagoon), despite, as Oswaldo keeps reminding me, its diminishing size, is almost beyond words, utterly extraordinary, with stripes and swirls of powder white, jade and copper, dotted with thousands of feathery flamingo balls.

Next stop, The City of Rock beyond is, of course, also magnificent. It looks like a ruined medieval town from a distance, but in fact, it’s the spectacular remains of eroded volcanic flow. There are countless gigantic edifices that become mansions, puma’s heads, moas, howling wolves and bell towers, with a little imagination. I’m the only person visiting. We’ve hardly seen a car since we left the Laguna Colorado, where there were maybe a dozen vehicles parked up when we left. The population here is so sparse, it's almost beyond remote. I’ve been anxious to take a picture of a lady wearing the traditional bowler hats I remember from my last visit, but the only woman I’ve seen so far was collecting tickets at one of the gates and she was wearing a baseball cap.

It’s so dry, there’s hardly any snow, despite the fact it’s cold., high country. Nothing will grow in this rocky terrain until we drop, from our 5000 metre highpoint, through the Eduardo Avaroa National Park, to the streams and velvet greenery of the altiplano. This area is beloved by llama, who wander freely. There’s no fencing at all.

The 4WD is great fun, speeding across the wide valleys, often choosing our own route across the ruts. If rain wasn’t so scarce the road would be much more difficult. Wilson plays mountain music from Bolivia throughout the journey; El Paso Condor meets Swiss yodelling. He also stuffs his mouth with coca leaves the whole time we’re driving. I’ve tried one and it hasn’t had much effect. But he eats handfuls at a time. Maybe that’s where I’m going wrong. Whenever we’re parked Wilson cleans the car, which is some challenge in this dust. He’s fanatical about the Toyota. Unfortunately, it doesn’t belong to him, though he wishes it did. We roll into Uyuni at 7.30 pm and I head straight for bed. Travelling in such dry climates has its drawbacks. My hair is like straw, lips peeling, nose bunged up, hands sandpaper. My iPhone won’t even recognise my fingerprint.

Salar means salt flats and the salt flats of Bolivia are the biggest in the world. The Salar is actually a huge (80 miles across) prehistoric lake of brine (which is lithium rich), covered by ten metres of salt crust. We're exceptionally high up, This is almost the crest of the Andes, at 3,656 metres above sea level. And it is extraordinarily flat - the elevation doesn't vary by more than a metre over the entire area. Apparently, the large area, clear skies, and exceptional flatness of the surface make the Salar ideal for calibrating the altimeters of Earth observation satellites.

Perhaps more excitingly, and unsurprisingly, Salar has been used as a filming location for several movies like Star Wars: The Last Jedi (it was planet Crait). And it's great for a spot of adventure. Today, we’re picking our own route again, straight across the glistening giant paving slabs that are the flats. The Salar serves as the major transport route across the Bolivian Altiplano. Once again, I’ve set my expectations too low; the salt stretches in all directions, a snowy ocean, curving on the horizon, the volcanoes forming a diorama at the rim, surmounted by a cerulean sky. It’s another wonderful journey, although sadly, with the exception of a few pools at the edges, the famous reflections are almost absent. There hasn’t been any rain. When it's wet, the flats become the world's largest mirror.

Incongruously, there’s a Dakar Rally monument en route, bearing an African turban. They ran the race here from 2014 to 2017, before deciding it was too destructive for the fragile environment.

Stretched across the centre of the Salar is a string of small islands. Isla Incahuasi is crammed with spiky columnar cacti, with huge bent fingers, impossibly picturesque against the blue and white background. Needless to say, it’s even better than the Cactus Valley of Chile.

Wilson has prepared a picnic lunch, which we eat at a cloth covered table, under an umbrella, out in the salt flat. Another surreal experience. The red stools against the tessellated salt trace patterns reminds me of last year’s picnic lunch in the lagoon at Tuvalu. It was warmer there. The food is typically Bolivian - plenty of carbohydrate, potato, banana, and quinoa (a local crop) with some chicken and vegetables.

We spend the afternoon pottering around the far fringes of the flats. This is another prime breeding ground for several species of flamingos - a few still linger. And there are caves, filled with filigree tracery, carved by the water, when it was much higher, soaring rock columns (the most notable is known as Cathedral Rock), a multi-coloured volcano, towering over quinoa fields, golden grass and some burial caves containing mummies.

We speed back across the salt - I keep wanting to say ice - to tonight’s lodging on the eastern edge of the plain. It’s called Luna Salada and it’s built entirely of salt.