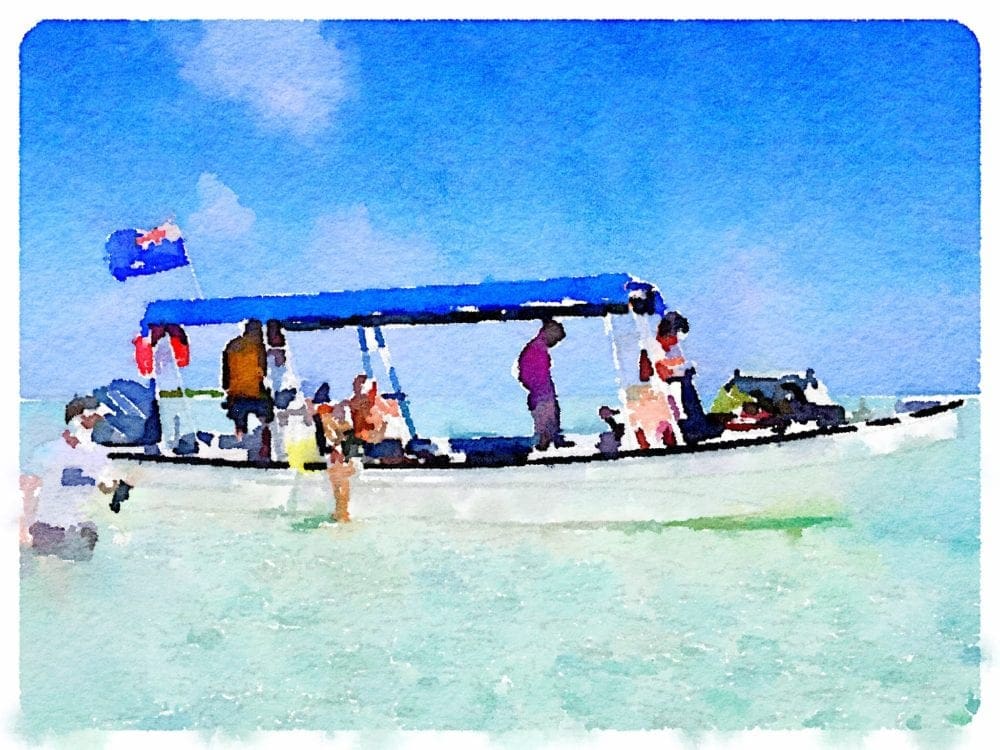 Cook Islands - Round and About in Rarotonga - The Big Trip 2

I've flown in from LA and Route 66. Now I'm on my own on the other side of the world in Rarotonga. The island is extraordinarily pretty with craggy peaks. My beach bungalow faces the most picture perfect lagoon straight out of the paradise catalogue with little islets (called motus) a reef (with crashing waves that sound like an aeroplane that never quite manages to land) and the obligatory white sand and bendy palm trees. Too bad the weather is mixed. Still no warmer than LA except for sudden odd baking patches of sun and raining a little. Global warming is becoming very disagreeable.

The Cook Islands are administered in association with New Zealand, so no-one is sure if this is a separate country or not. There are a lot of Kiwis here, both running businesses and on holiday. That means plenty of flat vowels and friendly, but we're not going to stand any nonsense or emotional twaddle. It's all super-duper organised. My little palace has a kitchen/diner/sitting room, bathroom and bedroom with every gadget known to man. I even have a share in a gas BBQ. I'm not even going to think about using it. Breakfast is delivered in the middle of the afternoon and placed in the fridge.

Before you run away with the idea that this is all very civilised I should point out that there are dogs, cats, mynah birds and cockerels ( with accompanying harems) skittering around, trying to sneak into the room at every opportunity. There is also a donkey braying plaintively somewhere. Most of the running about (well skivvying - they do everything at their own pace) is done by stocky local guys who seem to favour long grey pony tails that they pin up.

I've gone back another three hours to eleven hours behind BST and it was an overnight flight, so I'm zonked, which is a good excuse for sleeping a lot. This is easily accomplished for the most part, mainly on sunbeds, though it is impossible to oversleep in the morning with so many cockerels marauding around. I ate my breakfast before I went to bed, so a groundsman gets me a coconut from the tree outside my room in the morning. The grounds are full of palm trees. The mynahs spend most of their time causing a rumpus in the branches. They eat the palm nuts, pecking them off with their beaks and mostly ending up playing unintentional games of football with them instead.

I take a lagoon cruise with Captain Tama's Cruize outfit. The name should have alerted me. It is more concert than cruise. The snorkelling isn't bad, there are quite a few large fish, but then we decamp to the motu I can see from my bedroom window. After being fed juvenile sized portions of barbecued tuna we are subjected to hours of: this is how you climb a palm tree, husk a coconut, end of the pier humour and banjo playing. I grab my gear and wade back across the lagoon to my bungalow. I can still hear it.

Although not quite The Riviera this is certainly more sophisticated than anywhere I have been in the South Pacific so far. There are plenty of apartments and motels and I'm working my way down a series of excellent restaurants on the beach. Lots of seafood, live music and waitresses in blue and white print flowery frocks. It's not cheap here either, though the currency is interesting. I forgot I was wearing my shorts when I dived in and I discovered that the 'paper' money is waterproof. There are also triangular coins. Never seen those before.

My insides have taken exception to the goat curry I ate last night (I told you this wasn’t The Riviera). It's also very sunny, so more relaxation is called for today. Massages in the gazebo are very pleasant, though being eyeballed by a cockerel at the same time is a little disconcerting. Choosing a restaurant takes too much effort. Food from the night market next door I think.

I'm feeling guilty that I haven't done anything much since I got here except lie on a sunbed. First I do my laundry, after shooing the chickens off the washing machine. Then I set off on a bicycle, to explore.

The island is encircled by a main road, Ara Tapu, that traces the coast so I'm following that. After ten minutes I realise that a little more thought should have gone into the expedition. I have forgotten water, sunscreen and a map. I'm also wearing trousers, as all my shorts are wet. Predictably, it is turning out to be the hottest day yet.

I deem it too late to turn back and re-provision so I trundle on. The going is fairly flat, the lagoon and mountain scenery delightful. The sea is turquoise. Hibiscus and frangipani waft by. The Maori men aren't bad looking either. Though I'm pretty sure I surprise one in the act of trying to purloin my bike when I'm on a beach taking photos. He’s definitely taking rather too much interest in it, but pretends to be collecting dead palm branches as I approach.

When I finally acquire a map I realise that I am roughly halfway round. The whole circuit is 20 miles. In Tour de France terms this is nothing, so I decide to soldier on. Which is fine, except that I haven't realised that the wind has been behind me all the way so far, until I turn into the northern stretch and by then it is too late to go back. This part of the route winds the main town, Avarua,

Avarua is the capital of the Cook Islands, as well as being the chief town of Rarotonga. It's home to the Cook Islands' Parliament Buildings, an industrial zone, some docks and a couple of interesting churches, as well as the airport. The tour guide says that it is fun to stand at the end of the runway when the jumbos come in. They advise taking a change of underwear. Fortunately, no jets in sight.

I eventually accomplish my mission hot, aching and sunburned. Good trip, but I shall pay for this tomorrow.

My journey has confirmed my opinion on Rarotonga. Absolutely gorgeous, but a little too sanitised, lacking the edge of, for example, the Caribbean. (Unless you count bike thieves). I suppose that could be a plus or a minus.....