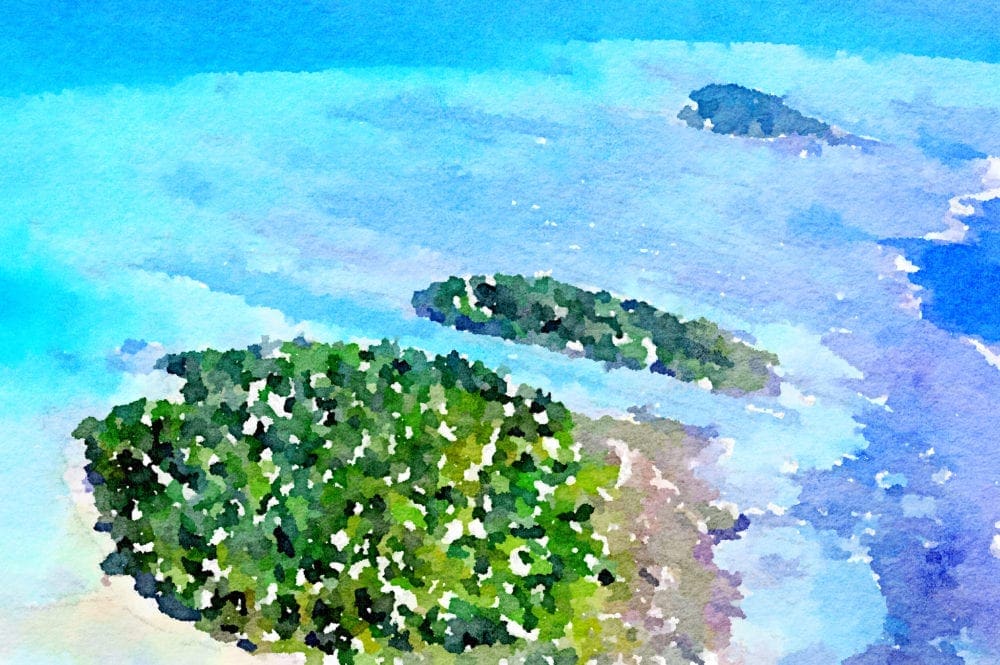 Cook Islands - Aitutaki, The Most Beautiful Lagoon in the World - The Big Trip 3

Aitutaki is billed as the most beautiful lagoon in the world, so expectations are high. And it is stunning. Tiny island, huge reef. It is all a notch better than Rarotonga. The beach is wider, the palms bendier and the water warmer. The temperature is perfect, the breeze is just right. Nothing to do except lounge around, swim, and watch the humpback whales steaming past the reef on the way to their breeding grounds.

Aitutaki is also much quieter. A sprinkle of Kiwis and Italians, (either on their honeymoons or into grizzled retirement) and some yachties. But I still have the company of the cockerels and mynahs, of course. The restaurant is only next door but I get lost coming home in the inky blackness. I don't even recognise my own bungalow when I eventually find it. I forget that I have hung my towels on the veranda and think it is someone else's clothes.

The dawn cock a doodle do chorus is so rowdy that it becomes difficult to sleep after 4 a.m. and there are too many mosquitoes. I have to swaddle myself in the sheets and daren't so much a stick a toe out or it gets bitten. And that's after burning coils, spraying me and the room and using little machines. So I get up early to do my emails. I've been sold Internet for twenty pounds. Unfortunately, it doesn't work.

They're not above pulling a fast one, even in Paradise, it seems. Paradise has other flaws. The restaurant menu isn't quite what it seems. Catch of the day is? Tuna. Battered fish with chips is? Tuna. Parrot fish sizzler is? Tuna. 'Well it's tuna season madam'. I ask if the squid is tuna. 'No, but it's off madam'. Back to the good things about Paradise. The snorkelling off the beach here is great. Reasonable amounts of live heliotrope coral and myriad kaleidoscopic small fish, crammed Jenga like into the overhangs. The lagoon is shallow and it's like swimming in a giant aquarium.

A lagoon cruise today. This one is the exact opposite of the one on Rarotonga. The scenery is so incredible it has to rank with the best I've seen. I don't know where to  start. The deepest turquoise, the most pristine dazzling sand. Rare red tailed tropic birds and their huge fluff ball chicks nesting between palm trees on a minuscule motu, called Honeymoon Island,

Another islet called One Foot Island (or Tapuaetai) is often touted as the most important attraction of all. It offers the best views of the Aitutaki lagoon and visitors can stroll on the sandbanks. It's so gorgeous that One Foot Island was awarded "Australasia's Leading Beach" at the World Travel Awards in 2008.

There are also two excellent snorkelling expeditions. Once, over a giant clam farm. Thousands of them, frilly mouthed splashes of luminous colour suspended from plastic bottles in cages, sorted tiny to huge. The very largest freed, to be scattered over the smooth white lagoon floor and embedded in the mini reefs.

The second Aitutaki expedition offers 'g and ts'. I am not sure that I am up for alcohol this early, but they turn out to be enormous fish called giant trevallies that circle us in a reef channel, looking suspicious, but benevolent. (They might well look suspicious. Half the tourists here have come with the ambition to catch one).

Lunch is scrumptious: breadfruit salad, seaweed, pawpaw and banana salad, sea grapes (seaweed that tastes like caviar) and tuna (!) Most of the people on the boat are kite surfers having a day off, as it's not quite windy enough. They are having withdrawal symptoms.

One of the kite surfers comes on a scooter to fetch me to have dinner in the evening. It's dark and moonlit and for a long time the road runs along the side of the airport runway. We debate whether to sing Top Gun or I'm Gonna Wash That Man Right Outa My Hair!

I had been persuaded into having a paddle-board lesson today. Kiwi Ken (so pronounce it Kin) was going to teach me, but it is raining. Paradise doesn't look  nearly as good when it's cloudy, but it is a bit of a let off. I didn't even know what paddle-boarding was till this week and I'm a bit worried I will go flying off out of control to the edge of the reef. It hasn't stopped raining all day, and I have accomplished very little.

I attempt to sleep to compensate for the rooster punctuated nights, but the ladies who service the rooms like to listen to the radio as they work. They drive round in a golf cart, sending the ubiquitous chickens scattering in front of them as they make a rapid U-turn away from the beach. I have just about mastered the art of bungalow door management. There are three sliding layers. Window (or door), insect screen (huh!) and wooden shutters. I also visit a Kiwi couple for a chat. They have a little TV in their room. I haven't seen a TV since I left LA. But theirs only has one channel and all it shows is rugby.

It’s still raining. You would have thought the supply of clouds would have been exhausted by now. There is a sort of truce when the sun comes out for half an hour. I shoot down to the beach, find a mattress and commandeer a sunbed. I'm alone here and it's the only mattress out, so a little tabby cat decides to share it with me. Well, first of all she thinks I've set it up just for her and she has to be persuaded off. Then she jumps back up onto the end. She's rolling about and stretching over the edge, so I have to tuck my legs up. Then she falls off altogether, clawing frantically at the bed and scrambling back up. I have to pretend not to laugh, so she can preserve her dignity.

It begins to rain again so I run for shelter and that's the pattern of the day, except that the cat only features once. I manage to snorkel whilst it's drizzling softly. There's plenty of activity at the water's edge today. Smaller trevallies, (GT cousins) zoom up and down with dorsal fins protruding like mini Jaws. They make a lot of splash.

Meanwhile, the waders are feasting on the tiny fish, trying not to look disappointed when they hoik up a mouthful of seaweed instead of their intended prey. Every so often the terns bob in too, diving from their lofty perches in the palm trees and there is a small hermit crab lugging a shell that is much too large for it. He tries to sneak closer every time he thinks I'm not looking. The thousands of black sea cucumbers on the lagoon floor creep along more quietly, tentacle feet to the fore, leaving a trail of sand pellets in their wake.

Scooting into the Hills of Aitutaki

Then another Aitutaki scooter adventure, trying to find a Polynesian restaurant up in the hills. Sandy floors, beach theme for some reason, but great seafood curry. My scooter companion is an anaesthetist. Not at all sexy, but he's married anyway. We have a good chat about books and films. A very chaste farewell. I leave tomorrow.

Later, a text. 'If there is anything you need in the next 12 hours please let me know'. What can he mean?

Flying here is as laid back as everything else. From Aitutaki returning to Rarotonga there are no safety announcements. We have to wait for the stewardess to finish the chapter in the novel she is reading before we get any drinks. Next Papeete, French Polynesia.