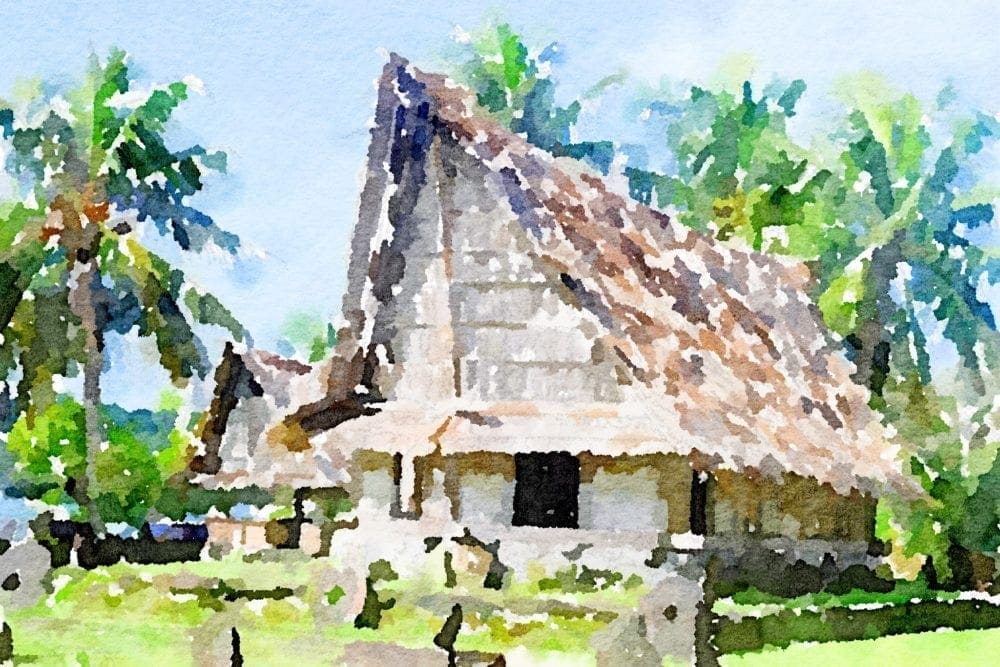 And today I’m off to Yap, the last of the states of Micronesia. There must be potential for really bad puns there too. From Chuuk I have to go back via Guam, so I leave Micronesia and come back again. It’s a long day, with a six hour wait at Guam Airport before I board exactly the same plane and sit in exactly the same seat.

A bare breasted grass skirted lady, slips a flower garland round my neck to cheer me up after enduring yet another queue for immigration. There are three Russians standing just behind me. The male is typically tall, well turned out with dirty blond hair. His wife/girl friend is like a delicate china doll with dark hair in bunches. She seems to be having a good sulk. Their little boy is hovering between the two of them and deciding that his father is the better bet for entertainment at the moment. Finally, bed at 2 a.m.

Things are looking up all round. I slept well, if not for long enough and even though, I discovered to my surprise that I have a waterbed. It’s a little lively, but it seems quite comfortable. My room is lovely and everything works. It’s yet another lagoon view. The hotel is called Manta Ray Bay Resort and it’s definitely a place with a theme (or two). There are photographs of the (many) mantas of Yap, all named; I like Newbie for a juvenile best. The rooms are all called after fish (I’m barracuda - read into that what you will). There’s a hand-painted manta sea scene on the bed throws. Manta shortbread biscuits are supplied and even the towels on the bed have been artfully crafted into a manta shape. The restaurant and bar is atmospherically housed on a hundred year old schooner moored by the dive shop.

And I’m engaged in a tour of the island with my guide Theo. He carries a small holdall with him everywhere. It transpires that this is crammed with betel nuts. The chewing isn’t as prevalent in Micronesia as it used to be. It causes the teeth (except the gold ones which are still seen as a sign of wealth here) to become red and stained, and making it looks as if the gums are bleeding. Theo says his mother gave betel to him while he was a child, to keep him warm while she worked in the fields. so he became addicted.

And he’s disgruntled because his wife wants to grow flowers in the garden, rather than more betel nut palms. I can see why he would want to grow more, as the nuts in the bag are diminishing at a rate of knots, but at least he waits till I’m looking the other way to spit. And he’s a relaxed and attentive guide, if not fully appraised of all the historical facts.

What to See on Yap, Micronesia

There are, of course, Japanese bunkers, planes and guns from World War II to be seen, but I’m more interested in the Yap culture, which is uniquely fascinating. This is Indonesia meets Samoa. In complete contrast to Chuuk the main island  is almost (not quite) litter free. The roads thread through nipa and mangrove swamp, like Kosrae, but here they well maintained and are neatly lined with crotons, hibiscus and other tropical delights. The villagers stay quietly out of sight.

The roads skirt the villages and they are entered via a network of stone paths which criss-cross the island. There are traditional, very tidy, woven long houses, with their pointy roofs, meeting houses for the men (with the best breezy views out to sea) and community halls. Slabs of stone protrude from the ground around all of these. They look like gravestones, but they are back rests for the men while they sit and rest or talk.

Theo tells me that the villages here are still very traditional. Most Men wear the th’us”, a type of loin cloth and women, urohs, the traditional brightly coloured dresses or grass skirts (bare- breasted) for festivals and ceremonies, though there are a few villages where this is still everyday wear. All the land in Yap is privately owned and we have had to acquire permission in advance to visit everything on our itinerary.

Theo has also carried a small branch with him throughout. In Yap, you should never enter a village without anything in your hands. If you have nothing, then it is understood that you have nothing to do there and have ill intentions. The world wide web tells me that carrying one green leaf will suffice, but apparently the internet is wrong and one leaf alone is viewed as insubstantial and the bearer therefore someone asking for trouble. So maybe there are observers, even though I can’t see anyone.

I’ve read about the Stone Money Banks located throughout the island. Massive pieces of Stone Money (roughly circular with a hole in the middle) line stone pathways in the villages, so displaying their wealth. Here, size does matter as each piece has a value based on where it came from and how it was made. Many of them were quarried in Palau. (The hotel soap is Yap money shaped, with a hole in the centre, and so are their pizzas!) I happily wander the stones I have been given permission to visit. It’s quiet and serenely beautiful. Only lizards, crabs and butterflies accompany me on my excursions along the moss covered paths.

The slight fly in the ointment are the over excitable dogs that roam the roads, as in much of the Pacific, singly or in groups. (I can feel a Yap pun coming on here and I’m desperately trying to avoid it.) On the return journey Theo asks me what I will have for dinner. He says that one of his favourite meals is fruit bat. I don’t think it’s on the schooner menu.

This is a serious dive resort, the dive boats are smart and extremely well organised, (roofs with no holes to boot) and it promises a lot of its dives. To reach the reef we have to slowly navigate the very narrow channels through the mangroves that divide the four flattish, main islands of Yap. The banks are alive with tiny, scurrying red crabs.

Because I’m the only one not diving I have my own snorkel guide, Joe, in attendance. And he is very attentive. He brings me drinks, carries my bag and escorts me along the reef for a front row view of the manta rays and the reef sharks. He grabs my fins and twirls me around, pointing me directly at the mantas to take my photos, as they sweep gracefully into their cleaning station. (The wrasse on the reef nibble away the parasites that inhabit the manta’s wings, so the mantas tend to favour spots where they know the fish gather). Joe is also a betel nut addict. He and Nico, the dive guide, are sharing a Rasta bag full of the nuts, which they open and inject with lime powder. They spit into the sea, which isn’t quite so interesting and not very alluring. ‘Caring is sharing’, smiles the captain.

A Swell of Sharks

Later, Joe hangs grimly onto my fins again, this time to make sure I don’t get swept onto the reef while I’m shark watching outside the lagoon. There’s a huge swell on and I’ve been told to float in the water until the divers have finished – the boat at anchor is not a comfortable experience. I’m even feeling a little queasy bobbing about in the water. No wonder this site is called Vertigo. I’ve taken so many pictures on my thrilling big animals of the sea safari that I’ve exhausted my fresh battery. My butler dispatches my camera to the boat for me. And naturally eight sharks immediately swim right up close. How do they know? Nevertheless, it’s been an exciting trip and a surprise contender for Uepi’s thrilling snorkelling crown.

Dinner in the schooner bar. The Russian family I saw at the airport are at an adjacent table –we’re on nodding terms now.

There’s a sunbathing area next to a small shallow pool (with mantas painted on the bottom, of course). Space is tight and it faces east, so sunny spots are at a premium. There were four Germans on the dive boat yesterday and as soon as we had docked one of them headed for the only bed still in the sun and put her towel on it…I had planned to spend as much of today in the sun as I could and I’ve succeeded in beating the Germans to the optimally placed bed. But the forecast suggests that the weather isn’t going to comply.

I’ve noticed that there’s a brass ship’s bell to ring if you want to be served. Very nice. Though not to be confused with the bell on the top floor of the schooner which indicates that you intend to buy for everyone in the bar. There are also two working (loud) cannons on the schooner. They fire those when it’s happy hour.

Colonia with a C

I was going snorkelling today, but there’s been a continuous downpour again all night and the weather forecast is all doom and gloom. I’m told visibility won’t be good and it will be cold. Naturally, it stops raining as soon as I have made my decision to cancel. But it’s still very damp and muggy. My sarong is still really wet and it’s been hanging up to dry for three days.

I saunter into town (Colonia with a C) but that takes five minutes. There are four general stores in a row in one direction. The rickety shelves, cans, hands of bananas and racks of cheap clothes are now a familiar sight. Towards the port are a handful of restaurants and the local version of a mall. This is a lime green roofed corrugated iron building containing a variety of dilapidated shops and offices. It’s very sleepy and I’m not sure that anything is open. There’s no sidewalk through town, but the few cars are careful to drive slowly round me. I consider walking further, but I can see some dogs prowling in the distance. And I don’t have a stick.

My flight on to Palau goes at 11 pm. There’s a leaving garland too. And at the airport I’m talking to a flower bedecked family seeing off their son, who is returning to college. They insist on presenting me with a flower crown as well. Also seated close by are the Russians – the lady is smiling today.