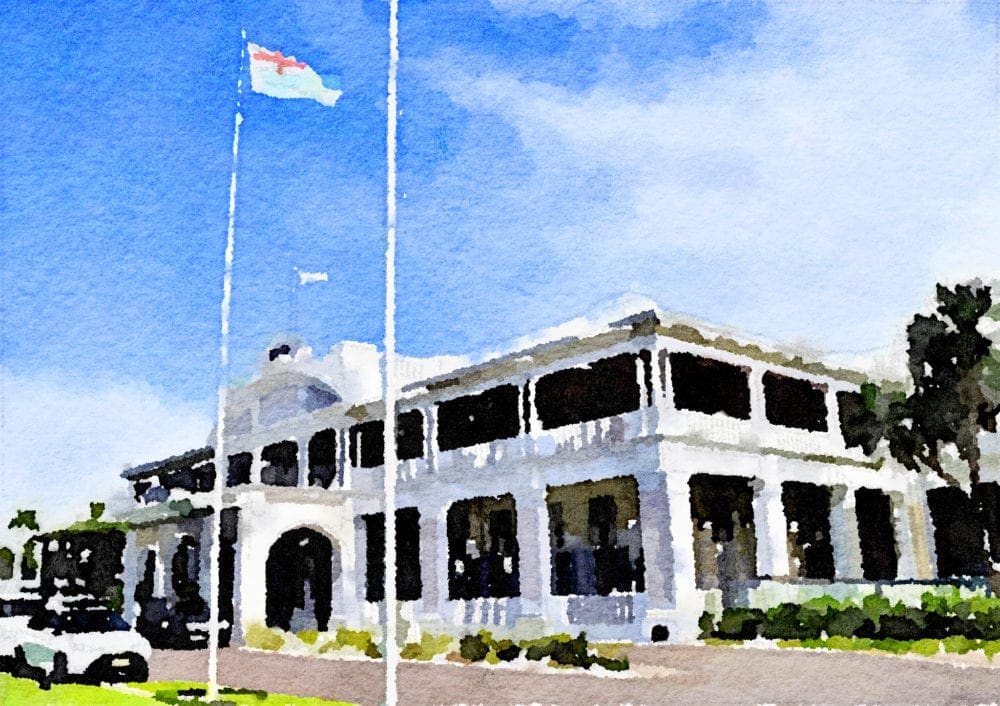 Nadi, in the west, is the tourist hub of Fiji, so it has the main airport. But Suva, on the other side of the island, is the largest city and the capital. and this is where the twice weekly flights to Tuvalu leave. Fiji feels wonderful after Nauru and Tuvalu's Moonlight Lodge rat. And I’m at the Grand Pacific in Suva, which has been totally refurbished and reopened – one of these great white colonnaded colonial hotels in the mould of Raffles. It’s incredibly comfortable, if still somewhat soulless. They don’t seem to manage to capture atmosphere in Fiji unless it’s proper traditional with bures. Minimalist design doesn’t quite come off in the humidity.

Suva has been the capital of Fiji since 1877. Before then the British colony was being administered from what had been the main European settlement, on another island, Ovalau, Therid of the population of Fiji lives in Suva or the area around this coastal city.

As well as being the political, economic, and cultural centre of Fiji. Suva also takes on this role for the South Pacific region. I've read it is home to the majority of the regional headquarters of major international corporations, international agencies, and diplomatic missions.

A Walking Tour of Suva

There’s a great view of Suva Harbour, cargo ships dotted in front of mountains, from my balcony, but it’s a grey one. It’s raining. Well, it's the dry season.

It’s too cool (and wet) to sit round the very lovely pool,so I wait for a break in the weather and set off for town. Taking my cagoule more or less guarantees the sun will appear, though it’s still gusty. The capital of Fiji is pleasant, but it doesn’t set the pulse racing. Most of the Fijians say they prefer Nadi. Lonely Planet has contrived to turn a tour of Suva into a two - four hour walk, but that’s really pushing it, unless a great deal of shopping and drinking coffee is involved.

The Highlights of Suva

Suva is vaguely colonial. There’s an imposing grey government building with a bit of art deco and a clock tower, a city library, some more modern administrative structures and a brown stone cathedral. There's a small colourful Municipal Market with a range of local fruit and vegetables. and a row of souvenir stalls along the quay. This is the most interesting part of town, conversing with the fishermen and watching the few ships at anchor out in the bay.

The shops are an up market India - higgledy piggledy but not chaotic - displaying saris and Indian food.  In fact there is a tiny ‘Little India’ at one end of the main street. These collide with a medley of duty free stores.

Opposite the hotel there’s a large sports ground and the Thurston Gardens. In the grounds, the Fiji Museum, with examples of traditional canoes, war clubs and tattooing tools. You have to pay to go in, but you can see most of the collection by peeping round the door. There are no other visitors and the attendants are friendly, but lethargic. There's very little else of note between the ubiquitous palms, except for another clock tower and some bedraggled crotons. Perhaps it’s the wrong time of year.

I’m back in under two hours. I might have been quicker, but I am greeted at every step by a good half of the Fijian males out walking and I have to smile and ‘Bula’ back.