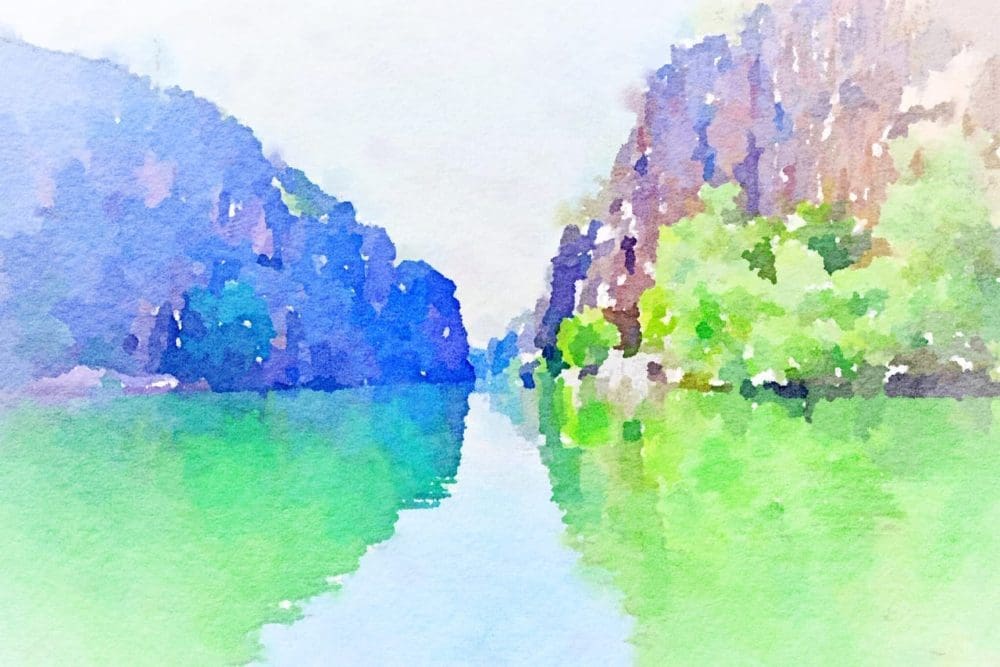 Petra has flown in to join me in Adelaide where I've arrived from Tasmania. I have to get myself up to Darwin for my flight to East Timor and the Ghan seemed the obvious way to do it. The centre of Adelaide is very different to my first trip thirty years ago. It’s gone high rise and modern.

Why is the Ghan called the Ghan? 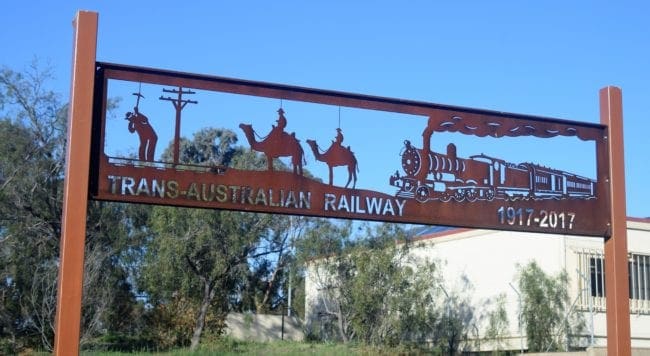 Ghan is short for Afghan. The original Adelaide to Darwin train was called the Afghan Express, because of the Asian cameleers who supported the engineering endeavour. They were collectively known as Afghans, even though many came from Pakistan, Persia and India. The first part of the railway, from Port Augusta, near Adelaide, was begun in 1878, but not extended to Alice Springs until 1926. The extension through to Darwin didn't begin until this century, facilitating trade links to Darwin and thus Asia and opening up tourism opportunities. 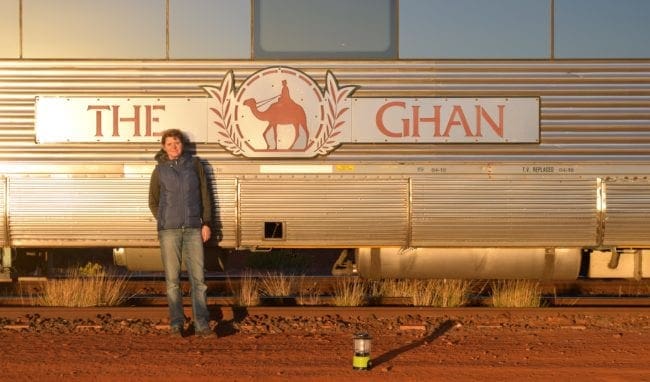 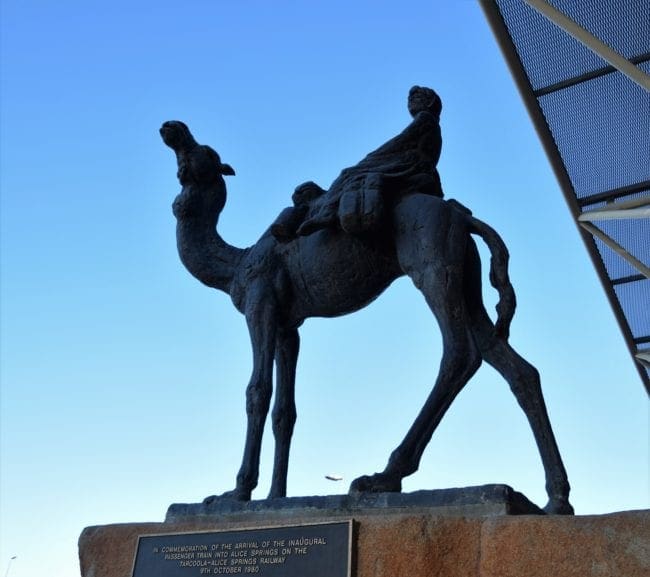 Today’s train is (I imagine) very different from the original. It runs weekly in each direction and we have extremely well fitted out single cabins, in what looks like an almost new carriage. The storage is cunningly contrived to make good use of every inch of very compact space. It’s certainly infinitely superior to the offerings on Amtrak. So is the food - and there’s unlimited access to soft drinks and alcohol. Which probably explains why the ticket is so expensive.

Our scheduled travelling time, including excursions, is 53 hours 15 minutes. And we are travelling 1,851 miles on what is now described as one of the world's great passenger trains.

The Ghan Across Southern Territory

The train rolls peacefully along, past wind farms, salt pans and the Flinders Ranges. As with Amtrak, however, there are plenty of halts in railway sidings. 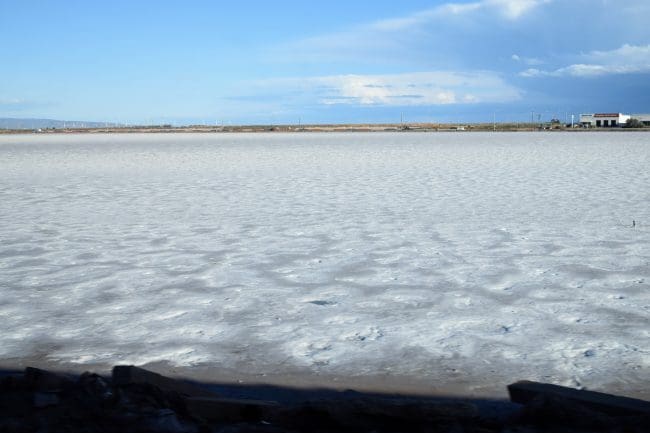 It’s the outback sunrise experience this morning: bonfires, bacon and egg sliders and a view of the sun, a huge fiery ball bursting over the low bush.

From then on it's red dirt and low green terrain. The train manager attempts to make things more exciting. 'The Northern Territory sign is ahead, get your cameras ready'. It’s so unprepossessing I almost miss it. The iron man sculpture that is promoted as the next attraction is even more diminutive. But the outback scenery, the squat acacia and the quavery ghost gums more aesthetically pleasing than the man made art, is a relaxing backdrop. It’s a good chance to recharge batteries (mine this time) and chat to fellow passengers. These are nearly all retired Aussies, (think Norfolk Island) for the most part extremely sociable. Australia is definitely one of the friendliest countries in the world. 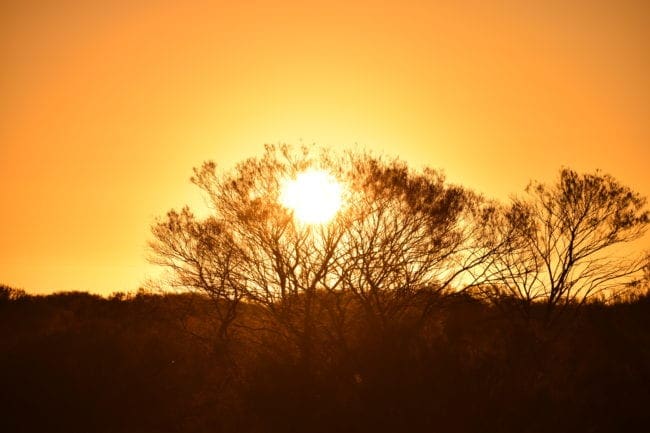 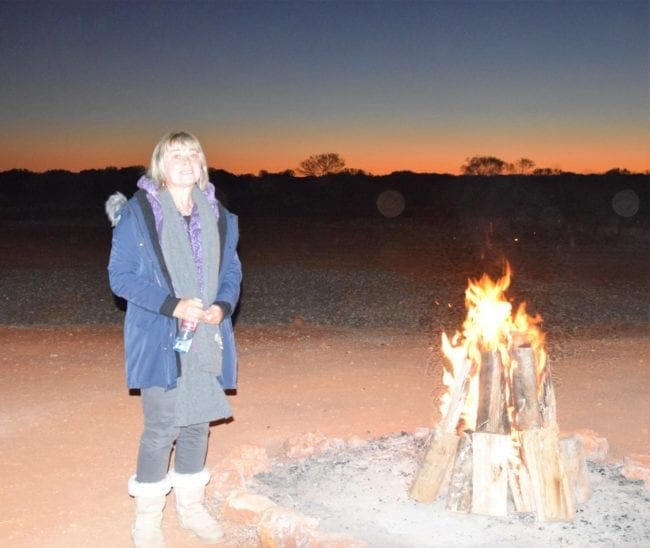 I was in Alice Springs thirty years ago too. I’ve retained a soft spot for the name ever since reading Nevil Shute’s novel, when I was eleven. First stop is John Flynn's Grave Historical Reserve. He was a Presbyterian minister who founded the Royal Flying Doctor Service. The site is marked by a boulder stolen from an aboriginal sacred site. 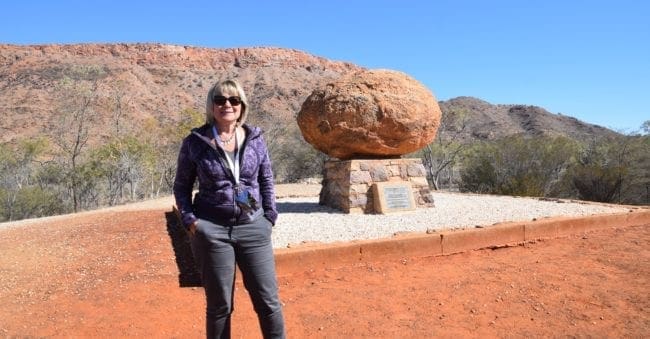 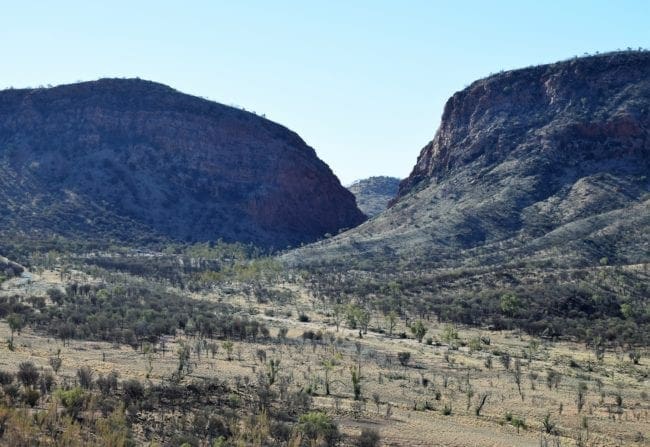 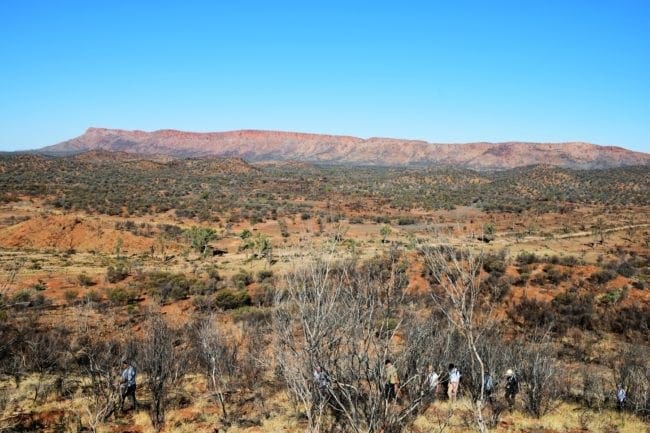 This afternoon, I’m heading out to the McDonnell Ranges for a walk at Simpsons Gap. Long pants and covered shoes are obligatory. They don’t want the punters getting bitten by snakes. The sky is azure, the ridges fiery red, the dusky rock wallabies peer down at us from the heights and the bus driver plays a didgeridoo. 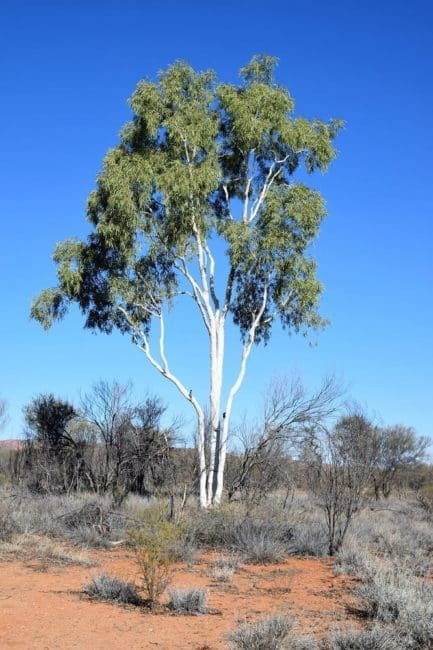 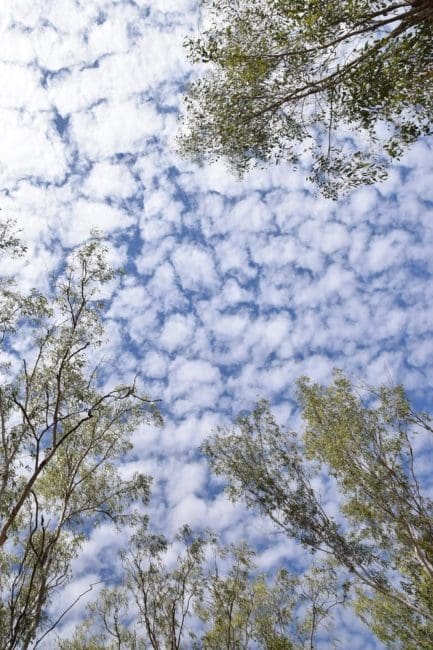 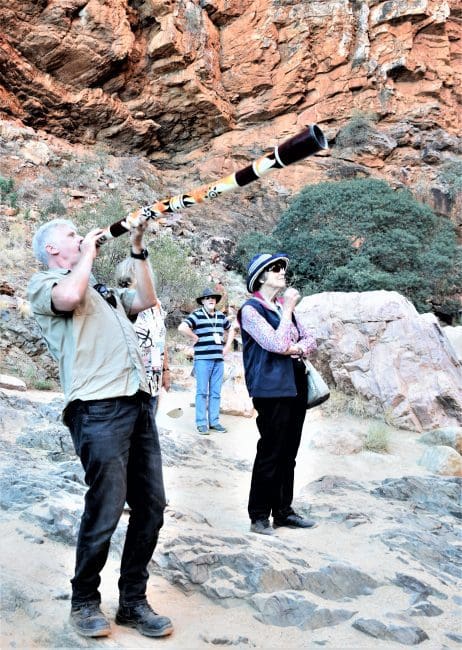 One of the very elderly passengers has gone AWOL this morning. The crew are walking through the winding corridors calling out ’Donald?’ and looking anxious. He can’t have got off. All the doors are locked.

The landscape is now golden rather than red. There are more trees, though they’re spindly and interspersed with minaret-like termite mounds. Today’s excursion takes us to Katherine Gorge, on the edge of Kakadu Park, where we embark on two cruises on a pair of the thirteen gorges, walking between the different boats. The scenery here is splendid, with wonderful reflections on the still waters of the Katherine River, especially the pools between the gorges. The escarpment towers above us and (relatively) friendly freshwater crocodiles bask on rocks. Any of the much less amenable salties that are discovered are transported to reserves. (They put out red plastic decoys and look for teeth marks.) 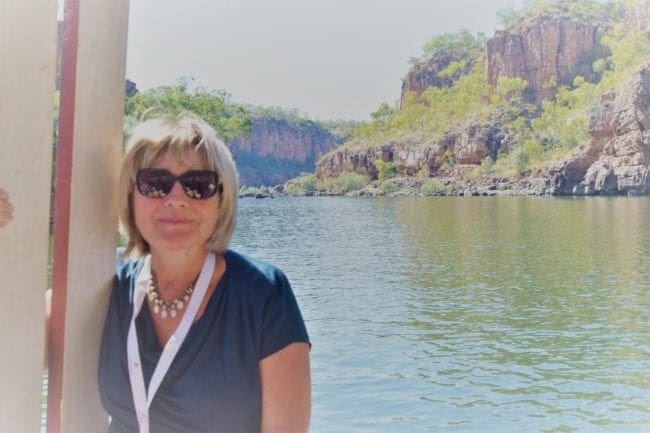 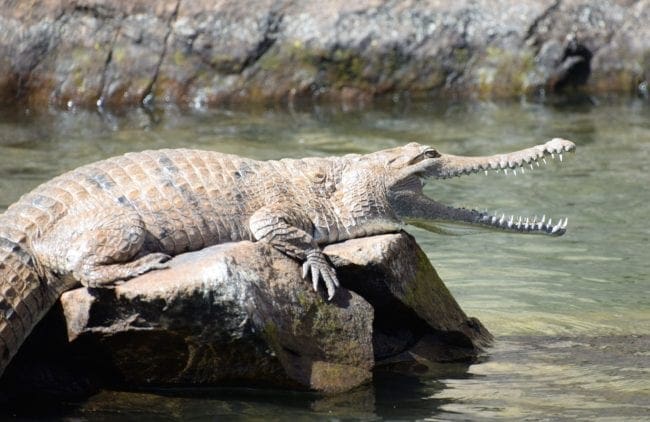 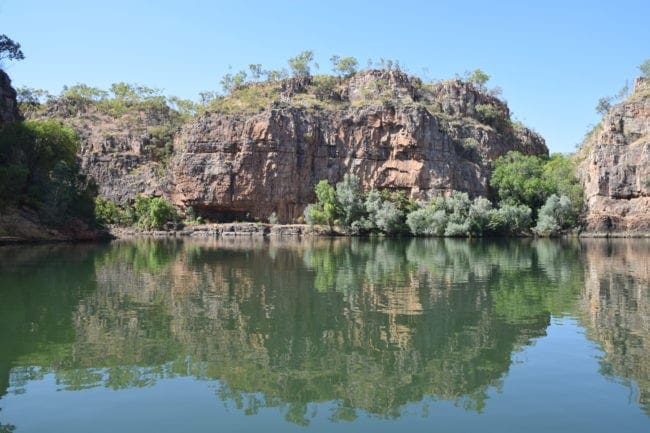 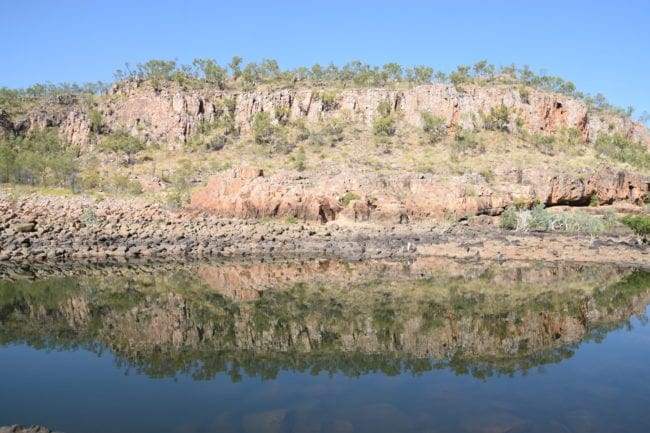 One of the attendants tells me that Donald was discovered in the platinum class area. The more affluent amongst us have a separate dining car, which we thought was locked off, (we couldn’t get in) but Donald managed to find his way through and was hogging a table and enjoying a superior breakfast.

The Ghan is undoubtedly a comfortable train, but it’s more of an excursion experience than a train ride. We seem to have slept through most of the terrain. Perhaps there isn’t anything else to see? We're decanted at Darwin and I prepare for my early flight to East Timor.