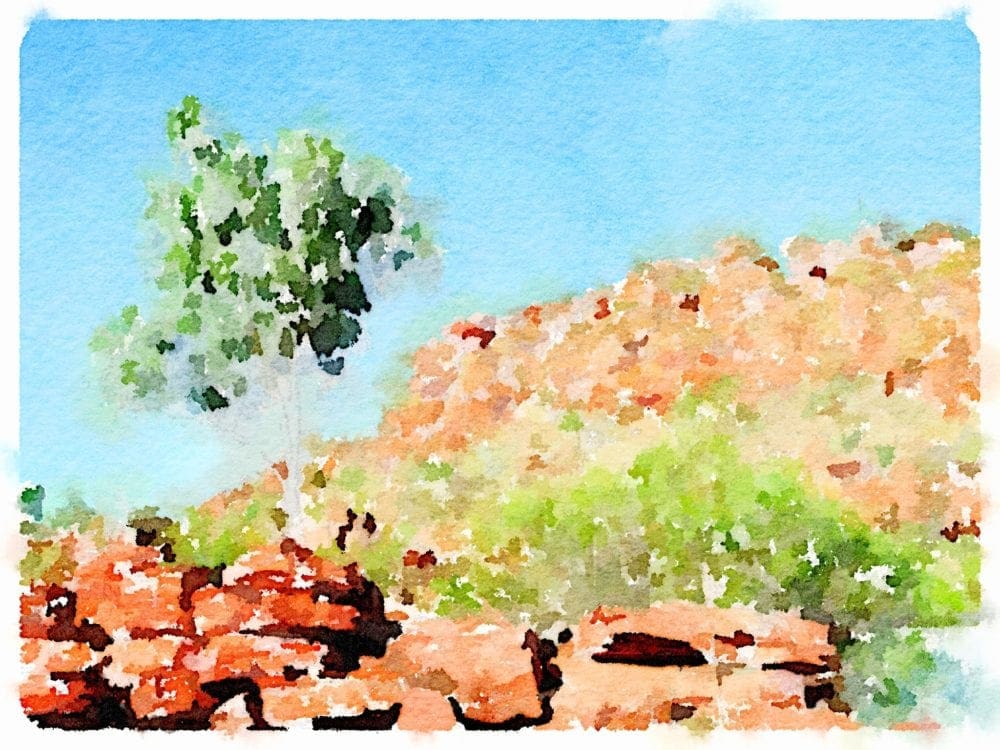 September 2001 and I’m in Japan. I’m watching a video on the TV that shows a plane crashing in to some sky scrapers. We think it is a cinematic thriller until we realise that it is a live feed. Naturally everyone is very sombre - all the planes have been cancelled for the last two days and my next stop is Australia. At the airport I’m told that the planes are back on schedule, but that's not the only problem.  ‘You can't get on the plane ma'am.  Your visa's no good.  (Trailfinders got it - it's only one of those electronic ones). ‘Why?’  ‘We don't know! ' I have to wait an hour feeling very tearful until the tannoy pages for Suzan Wogers.  Everything is now okay, but no explanation is proffered.  I sleep across three seats (very nice) on the way to Brisbane. A lot of people have cancelled international travel. I anticipate problems on arrival in Oz, but no-one says a word and I’m allowed in. Except that whilst I’ve been in the air Ansett Airlines have gone bust and I have eight flights booked with them round Australia and, next, down to Tasmania.

Byron Bay -The First Bus Out of Town

Trailfinders say try to book more flights, we will refund you at some point. Wow. Both Air New Zealand and Quantas are also very unhelpful. Their business is booming now.   I manage to re-book two of my eight flights, the longer ones, and then resort to buses.  I’ve always fancied emulating the movies, so I get on the first bus out of town and end up in a place called Byron Bay, the hippy capital of Australia. It's very pretty.  Fantastic beaches edged by lush rainforest covered mountains full of parrots, iguanas and other tropical exotica, houses on stilts, spiky bottlebrush trees, a ridiculous supply of good restaurants, surf shacks and massage parlours.   I decide I want to live here.  Then I  look again at the average Australian male.: shorts, long socks, ruddy cheeks and a beer gut from consuming too much Victoria bitter.  Maybe not. It 's also, serendipitously,  the home town of Damian (see Indonesia). So at least I have somewhere to stay.

We doss on the beach.   Everyone here is on dope, so I  smoke my first joint (Is that sad or not?).  I cough a lot and nothing else happens.

I’ve joined the student gap year community. A twelve hour bus ride to Sydney, down the coast, The highlights are passing a giant prawn and  watching videos. One day in Sydney to re-visit. I stay in a hostel - never again- sharing with three twenty somethings.  Clothes all over the floor, and I have to fight my way in to our cubicle.  Ugh!  retracing my steps round the Victorian buildings of Darling Harbour, the monorail and aquarium, and the botanical gardens. Sydney feels the same but different. Odd. To finish my tour,  a fantastic sunset helicopter flight over the bay with great views  of the Coathanger Bridge and opera house. Every type of cuisine seems to be available along Glebe Point Road, though it's difficult to navigate your way through all the sweating joggers.

Another twelve hour bus journey via Canberra. This time we pass a giant ram. A two hour stopover is just about right to see everything Canberra has to offer. Other than a multitude of new-ish government buildings there's a flower festival on, so most of the two hours is spent admiring themed carpets of tulips at Floriade.  Eventually, Melbourne. I'm staying here with Sue who I met in Japan.  We tour the city, and  its surroundings. The Mornington Peninsula is  just like being back in Sussex: Brighton Beach, Shoreham, Hastings, St Leonards. Except that there are  mountains and the beaches are golden. There's a good view from Arthur's Seat (now we're in Scotland.)  The city is neat and business like with pretty parks and a very Bohemian area, Brunswick Road,  that's good for eating. It's great food again,  I've not had a bad meal yet.  It was Greek last night.  And I manage to get my cancelled flight to New Zealand re-booked. (See New Zealand for this section)

Cruising the Whitsundays - with Captain Erica

As usual my travels have veered from one extreme to the other. Back in Australia , a night in Brisbane with Peter, also from the tour in from Japan. He tours me round the botanical gardens, the tower viewpoint. It's nice but not very happening. Another bus, 18 1/2 hours ( effin Ansett) back  up to Airlie Beach. its a tough journey. I wake at 6.30 a.m. to hear ' It's really difficult to stick my teeth back in on a bus,' wafting own the aisle.  a bathroom is very welcome- about half an inch of dirt must come off. Then I wander out to sign up on a boat - my goal is the famed Whitsunday Islands and streams of boats run short cruises there. How to choose from the many touts sitting in their little cabins? The  catamaran Avatar, leaving in two days time, seems a bargain. In-between I admire all the chocolate shops, swim in the pool, read the Celestine Prophecy (recommended by a girl in the swimming pool) and go out for dinner with Ray, Bert and Aidan, who I met in the supermarket. They drink a lot and they're Irish, but you probably worked that out.

Then I get to find out why my cruise was so cheap. Twenty one young things  crammed on board a racing catamaran. Cosy isn't the word. I'm allocated  one bunk, in a hull with Kim, a tiny (fortunately) Korean girl. We sleep nose to tail. Fortunately, she doesn’t snore, though she ends up under me at one point in a mire of spilled shampoo, suntan cream and orange juice. The captain is a stocky 23 year old rugby player called Eric, who specialises in painting toe nails. He has a box full of the necessary accoutrements and he’s pretty good at it. It turns out he prefers being called Erica. He puts me in charge of music. My capital gold CDs go down well and it's better than hauling on sails. We skim along to the strains of Vienna, battling for sunbathing space on the webbing and squealing when the waves splash through.

The beaches in the Whitsundays are truly stunning - the best in the world? The snorkelling stops are hugely worthwhile, and at least we get some space  off the boat. At Whitehaven Beach, aptly nick-named Paradise, the softest silver sand stretches forever and when we do reach the cerulean sea, a school of rays are basking gracefully in the clearest of water.

A seventeen hour bus journey back to Brisbane and another overnight with Peter. Someone has left an aboriginal baby alone on a seat at the back of the bus.

Then I find myself on a bus travelling across the top and down the side - Darwin to Perth - with a group of 23 old age pensioners, a Swiss couple and one 33 year old gay guy. Does nobody my age travel any more?  And we're camping!  What am I doing camping?  Putting up tents, with unwanted help and unwanted instruction  and getting covered in muddy grass.  Being woken much too early, with everyone packed up an hour before we are due to leave.There is red dust everywhere - yes everywhere - and salt water showers and taps that spit frogs at you when you turn them on. There are some pretty gruesome sights in the washblocks where my fellow travellers strip off with no hint of modesty.

South to Katherine Town (war cemetery and beautiful trees), Hot Springs (no time to try them) and the red escarpments and waterfalls of Gregory National Park. Into Western Australia and a cruise on Lake Argyle. More red mountains, (Kelly's Knob) and crocodile spotting. There are fish with crimson eyes swimming alongside them.

A flight over the Bungle Bungles, a walk in the Hidden Valley, the odd creek or two. Gum trees, galah cockatoos and a great deal of peeping scratchy  blue hued spinifex contrasting beautifully with the cinnamon desert, as we near the coast. Geike Gorge with pied cormorants, dollar birds, stunning reflections and coolibah trees. (No prizes for guessing what I'm singing now.)

There isn't a moment that isn't organised.  It's like Butlin’s on wheels.  There are microphone introductions as we're going along (even when I'm sleeping) and  quizzes and songs with actions . There is  even a fancy dress competition. A late night is 9 pm. I've decided that AAT stands for Ancient and Tragic. Fortunately, Paul is great fun and we wind all the pensioners up by flirting outrageously and sharing a cabin (a welcome respite from the tent) at Broome.

Broome (population 28,000) is the largest town for many miles. Cable Beach is spectacular and I'm tour photographer as the team take camel rides at sunset. Paul has to leave at Broome though, so I soldier on solo.  The plus side has been more fabulous beaches (Eighty Mile, which is actually Thirty Mile), turquoise seas, stunning gorge scenery, dugongs, (manatees), Ningaloo, dolphins (I feed  a cheeky little one at Monkey Mia), sand dunes (make great nests to sunbathe topless and escape the rest of the tour in the bay), turtles, diamond mines (Geraldton), iron mines (riveting - boom-boom!), banana plantations, stromatolites (the oldest form of life known on earth), limestone pinnacles, endless flat red desert,  wonderful sunsets and beautiful weather.  I've been very lucky.

Now I’m in Perth, savouring civilisation and the city.