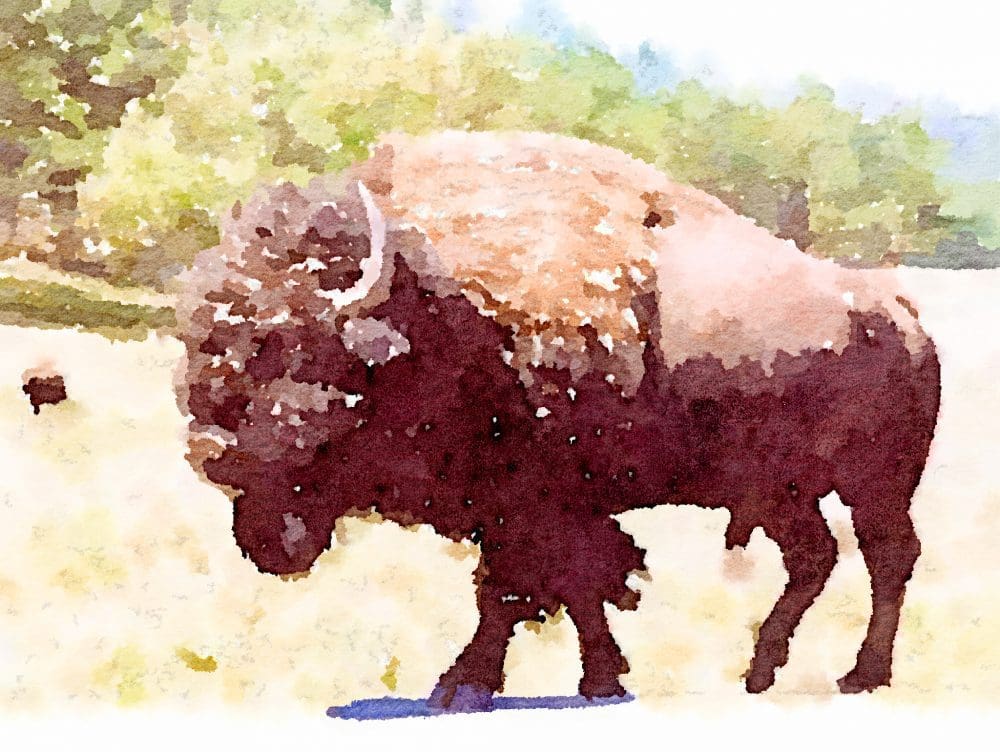 U.S.A. - The First Journey in America - The Mid-West

We hire a car to make a circular tour of the mid West - Denver to Denver. This is some of the most spectacular scenery in America. The people are friendly, accommodation easy to find and the national parks are a revelation:

Denver, the mile high city (there's a mark on the capitol steps), is the capital city of Colorado and setting for to the original TV Dynasty. It's also the gateway the the Rocky Mountain National Park. The park is situated directly on the Continental Divide, home to the headwaters of the Colorado River. It's very alpine, with mountain views (up to 4,000 metres), lakes, tundra, meadows and a wide variety of wildlife - deer, marmots, Bear (of course) and moose. One range of gentle peaks is known as The Mummies. When I'm hiking I'm always in two minds as to whether I actually want to see a bear or not. They're supposedly more aggressive if they are surprised, so we are instructed to sing loudly, as we march. No prizes for guessing what I'm singing - it is the Rocky Mountains. Needless to say, we don't see any bears.

North with a slight wobble, to Cheyenne. Sadly, it's not at all as I imagined after watching all those westerns. It's a large and fairly unappealing town. Though there is plenty of sourdough on offer. and cowboys. A guy in a huge Stetson tips his hat ,as he walks past. 'Howdy Ma'am.' So some of it is just like the films.

Nipping through a corner of Nebraska to South Dakota and the Badlands. Badlands are defined as dry terrain, usually full of ravines, gullies, buttes, and hoodoos. The Needles Highway, wends scenically through the iconic granite formations of the Black Hills. Now this really is evocative Western Country. There are also herds of wandering bison. These are nowhere near as common as the movies would suggest. In the sixteenth century, 25–30 million buffalo roamed North America. The cowboys, explorers and commercial endeavours shot most of them. There were even buffalo hunting competitions. They took the fur and tongues and left the rotting carcasses behind. Fewer than 100 remained in the wild by the late 1880s.

The bison story is told at the Deadwood museums. Deadwood, in the Black Hills ( there's definitely a song there),was named by early settlers after the dead trees found in its gulch. It reached its height in the 1870s. during the Black Hills gold rush. Dakota was a territory then and the Black Hills sacred ground that had been promised to the Sioux Native Indians as part of their Reservation. The United States government soon reneged on the deal when the gold turned up and the territory was broken up.

At times, Wyatt Earp, Calamity Jane, and were numbered amongst the Deadwood population of 25,000. Wild Bill Hickok never got to leave. He was shot, by Jack McCall, an unsuccessful gambler whilst playing poker. The hand of cards which he supposedly held at the time of his death has become known as the dead man's hand: two pairs; black aces and eights.

Today, the population is about 1,200 and the entire town has been designated as a National Historic Landmark District, for its well-preserved Gold Rush-era architecture. This is more like it.

The Mount Rushmore National Memorial is a highly controversial sculpture, not least because it's in the stolen Sioux Lands. The idea was to create a tourist attraction that people could visit in their new cars. The Needles were the original choice, but the sculptor, Gutzon Borglum, deemed the granite to be too soft. He chose Mount Rushmore, a particularly sacred Sioux site. The mountain was originally named Six Grandfathers by the Sioux. It was renamed Mount Rushmore after an attorney who struck a deal for a tin mine. The sculptor had Ku Klux Klan affiliations.

The original idea came from South Dakota historian Doane Robinson, who wanted to feature American West heroes, such as Lewis and Clark. Borglum believed that the sculpture should have broader appeal and chose four presidents. The sculpture was never properly finished - they ran out of money. Today, it features the eighteen metre heads of Presidents George Washington, Thomas Jefferson, Theodore Roosevelt and Abraham Lincoln. They were chosen to represent the nation's birth, growth, development and preservation, respectively.

Northwest to the tip of Yellowstone National Park, which is in Montana, though most of the park is in Wyoming. Yellowstone was the first national park in the U.S. (1872) and is therefore probably the first national park in the world. It was made famous by Yogi Bear, who called it Jellystone. It's packed with slow moving RVs - everyone is trying to make a sighting. If one car stops everyone else does too. 'What have you seen?' Even if they've only pulled over for a pee break.

Yellowstone Park is the largest and most famous big animal location in the contiguous United States. Grizzly bears, wolves, and free-ranging herds of bison and elk live here. Confusingly, American elk is not the same as Eurasian elk, which is known as moose in America. American elk is also known as wapiti and it's a member of the deer family. The Yellowstone Park bison herd is the oldest and largest public bison herd in the United States And indeed, there are foxes, bison, elk (or wapiti or whatever you want to call them) and deer to be seen. from a distance. Still no bears.

Yellowstone is also known for its canyon, waterfalls and sub alpine scenery. But its probably most famous for its geothermal features, travertines, steam vents and geysers, especially Old Faithful. This geyser erupts regularly, so the rangers post expected times for the next performance on a board. You sit on benches and wait patiently. and when it finally spouts forth everyone stands up in front of you to take photographs and blocks your view.

The next park, to the south is Grand Teton. These stunning mountains are said to be named after the French word for nipple, because of their shape. Grand Teton is the tallest mountain in the Teton Range.

Sill in Wyoming - this state has a lot going for it. The 386 metre Devil's Tower is a butte made famous by the 1977 film Close Encounters of the Third Kind. It's an igneous intrusion left behind as the sedimentary rocks around it eroded. It was the first designated National Monument in the USA. The name is due to a misunderstanding - an interpreter reportedly misinterpreted a native name to mean 'Bad God's Tower'.

South to Utah where, again, there is a lot to see. first up, the capital, Salt Lake City, on the Great Salt Lake. Salt Lake City was founded in 1847 by Mormon pioneer settlers, led by Brigham Young, who were seeking to escape persecution they had experienced while living farther east. They built an extensive irrigation network to aid agriculture in this arid region. Immigration of international members of The Church of Jesus Christ of Latter-day Saints, mining booms, and the construction of the first transcontinental railroad brought economic growth, and the city was nicknamed "The Crossroads of the West". But this is only one area of the city. Salt Lake City is also known for its politically liberal and diverse culture and is home to a significant LGBT community.

Utah's Bryce Canyon National Park is perhaps my favourite. Thousands of cinnamon hoodoos arranged in circular lacy patterns around a giant amphitheatre. It's not really a canyon at all. A playground for the Gods maybe. Though it's searingly hot at the bottom.

Zion National Park, down the road, is much bigger, more majestic and far less delicate with its marble like monoliths, mountains, canyons, buttes, mesas, monoliths, rivers, and natural arches. And here there really is a canyon, or two.

On to Arizona and north rim of The Grand Canyon, the granddaddy of them all. The park restaurant, we're hurrying for a late breakfast, is perched right on the edge of the canyon and it's falling away beneath my feet. An unforgettable first impression. The Grand Canyon is 277 miles long, up to 18 miles wide and over a mile deep . The many stripy yellow, red, orange, green and brown place like buttes were carved by the Colorado River. The South Rim is said to be even better. But we're staying here. It's a 200 mile drive to get to the view points on the other side.

North east and back into Utah, just,to Page and Lake Powell. Lake Powell is a very blue artificial reservoir on the Colorado River, created by the flooding of Glen Canyon (by the Glen Canyon Dam). The result was the Glen Canyon National Recreation Area, straddling Utah and Arizona, This is a major vacation spot visited by approximately two million people every year for watersports: boating, fishing, waterskiing, jet-skiing, and hiking. There are also a range of stunning buttes. It is the second largest artificial reservoir by maximum water capacity in the United States behind Lake Mead, storing 24,322,000 acre-feet (3.0001×1010 m3) of water when full. However, Lake Mead has fallen below Lake Powell in size several times during the 21st century in terms of volume of water, depth and surface area.

Also on the Arizona, Utah border is Monument Valley. This cluster of vast sandstone buttes, (the largest is 300 metres tall) above within the Navajo Nation Reservation. They charge admission to the epitome of western movie backdrops. Director John Ford used the location for a number of his best-known films and this scenery has now become synonymous with the American West.

The Four Corners region and just into Colorado once more, to Mesa Verde National Park. This one is also UNESCO World Heritage Site, less scenery and more archeology. .As with all the parks, there's masses more to see than we have time for. This is the largest archaeological preserve in the United States. Mesa Verde (Green Table in Spanish) has more than 5,000 Ancestral Puebloan archaeological sites, including 600 cliff dwellings. including the Cliff Palace, thought to be the largest cliff dwelling in North America. They mainly date from the twelfth century.

Returning to Denver following the Colorado River and the Black Canyon of the Gunnison. The Gunnison is one of the larger tributaries of the Colorado. Its canyon is impressive enough to have its own national park. And it's called the Black Canyon because parts of the gorge only receive 33 minutes of sunlight a day. According to authorr Duane Vandenbusche, "Several canyons of the American West are longer and some are deeper, but none combines the depth, sheerness, narrowness, darkness, and dread of the Black Canyon.

South and west of Denver are some of America's' fanciest and most expensive ski resorts,

Aspen and Vail are probably the most well known of the ski areas. Vail has just one very high mountain, (though it's huge one) whilst Aspen has four. Vail is much newer, modelled on Swiss resorts. Aspen developed from a silver mining town and has historic buildings. So have other well known names, Colorado Springs, Telluride, Breckinbridge, Steamboat. And there are even more historic towns that are lower down the slopes. Silverton is known for its back in the wild west main street and the Durango to Silverton Railway (Iron Horse).

Then it's back to Denver.

Read more about the U.S.A. here.