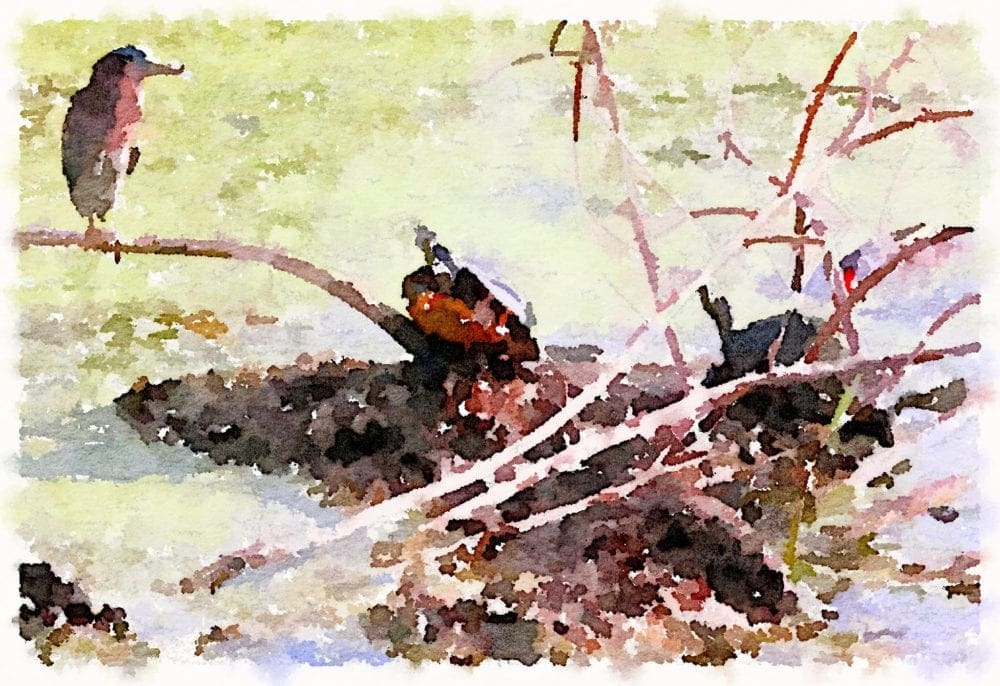 Home - Stories - North America - United States of America - U.S.A. - Florida - The Everglades and the Keys - Round the World Anticlockwise 1

U.S.A. - Florida - The Everglades and the Keys - Round the World Anticlockwise 1

Good flight out – met by Bruce at Miami airport. He is lurking by a pillar in arrivals, but I don’t recognise him. He has suddenly sprouted a mane of hair that he didn’t own when we first met. Then, Bruce was travelling with his wife Laurie, in Brazil and they invited me to stay with them in Fort Lauderdale. On that trip, he was almost totally bald.

Florida is the sunshine state, just about the most southerly of the so called contiguous states renowned for its tropical and subtropical beach resorts and other tourist attractions. (The Everglades, Walt Disney World, the Kennedy Space Center and Miami Beach.) Florida contains 4,510 islands. Perhaps more surprisingly, it’s the flattest state, with a high point of only 105 metres.
Various Native American groups have inhabited Florida for at least 14,000 years. In 1513, Spanish explorer Juan Ponce de León became the first known European to make landfall, naming the region La Florida, for its lush greenery and the Easter season (Pascua Florida in Spanish).

Florida was the first area in the continental U.S. to be permanently settled by Europeans. The Spanish colony of St. Augustine, founded in 1565, is the oldest continuously inhabited city. Florida was repeatedly contested by Spain and Great Britain, before being ceded to the U.S. in 1819. It was admitted as the 27th state on March 3, 1845. This was the time of the Seminole Wars (1816–1858), the longest and most extensive of the Native Indian Wars in U.S. history. Florida was one of the seven original Confederate States to secede from the Union in 1861. After the Civil War, Florida was restored to the Union in 1868.
Florida's large diverse population and thriving economy give it considerable influence in national politics It’s recently achieved fame as a major battleground in presidential elections.

He takes me into Fort Lauderdale to see how the other half live in Florida. It nestles on the edge of the Miami metropolitan area, a gateway to cruising (from the huge port) and the Everglades. It's a smallish city, with a population of 182,437. Nevertheless, according to Wikipedia, it boasts 560 hotels, over 4,000 restaurants, 63 golf courses, 12 shopping malls, 16 museums, 132 nightclubs, 278 parkland campsites, and 100 marinas housing 45,000 resident yachts. Apparently, Fort Lauderdale is the Yachting Capital of the World.

There are not one but three forts here. They're named after Major William Lauderdale and were constructed during the Seminole Wars, the longest of the Native Indian Wars.

We wander down Los Olas Boulevard, described as 'the heart of Fort Lauderdale, South Florida’s most architecturally unique, authentic, and eclectic shopping and dining district'. It stretches from the beach, immaculately lined with palm trees and beautiful people, to rise over the fabulous Intracoastal Waterway with its views of multi million dollar homes and a few of the enormous sparkling yachts. I gape at Picassos and Chagalls in the windows.

Then we have huge margaritas on the beach. A cloudless sky. Bruce decides that this is a good moment to own up about his hair and tell me that Laurie also wears a hairpiece. In fact that was where they met - buying wigs.

Alone with the Alligators

The four TVs are all running a royal weekend special. Pseudo Dianas and Fergies on every channel. Unmissable. Not. Laurie and Bruce have gone to a wedding, leaving me the run of their exotic Spanish style mansion. I’ve still got jet lag, it’s pitch black outside and we’re on the edge of the Florida Everglades. Yesterday, they hauled an alligator out of next-door’s pond. Suffice it to say I’m not venturing out on my own.

We're driving down to the Florida Keys. I can't keep my eyes off Laurie's hair. It’s very black and luxuriant. Then, Bruce says he is too hot and removes his toupee. It sits on the parcel shelf like a squashed hedgehog. I wait for Laurie to do the same; 'Hers is bonded on,' Bruce confides. 'She never takes it off.'

The drive is long and slow. The Florida Keys (or Cays) are a string of tropical islands stretching about 120 miles off the southern tip of Florida, There's a great deal of traffic and numerous causeway bridges. This is the southernmost end of U.S. Route 1, the longest north–south road in the United States. Bruce spends the first half of the ourney on his phone (driving with one hand) shouting at the people running his medical centre. (He’s a foot doctor). Then Laurie spends the other half on her phone, having an argument with her twin sister.

The southernmost city of Key West is about 95 miles north of Cuba. It's famous for mile-long Duval Street’s many bars and is very pretty and very expensive. Colonial houses, designer clothes and stuffed lobster. We spend a morning examining 400 dollar handbags and after my millionth yawn I eventually persuade my companions to decamp to the beach. This is excellent, white sand and crooked palms. Pelicans swooping. I snorkel and eyeball some huge woohoos and the odd yellow tailed snapper. The Florida Reef is the only living coral barrier reef in the continental United States, and the third-largest coral barrier reef system in the world (after the Great Barrier Reef and Belize Barrier Reef).

Key West and the Civil War

There's even a sea battle being re-enacted complete with nineteenth costumes, schooners and guns. The festival re-creates the Civil War era ,when Key West was the only Deep South port to remain in Union hands. Fort Taylor, on the island's Atlantic Ocean shore, played a major role in the Union blockade of Confederate shipping.

Very entertaining. I am just getting comfy on my deck chair when my companions decide it is time to leave.

Laurie and Bruce disappear into a bar.  I venture into Hemingway’s house. Ernest Hemingway and his second wife Pauline spent most of the 1930s in a home on Whitehead Street that you can visit today. The Pulitzer and Nobel Prize-winning author's years in Key West were his most prolific writing period. He also spent his days fishing the waters surrounding the island on his boat Pilar. The museum contains sixty odd cats (Hemingway seems to have liked them) and a typewriter.

Afterwards, a Florida stone crab restaurant. Frankly, the local delicacy is bland, a tad disappointing. Laurie and I are both exhausted by all the shopping, so we retire to our B and B. I remove all my clothes and am wandering round my room thinking about bed, when there is a knock on my door. It’s Bruce." Wanna come for a drink baby?" He’s eyeing up my strategically placed towel lasciviously. I decline this tempting offer.

This is a very weird country. The houses are sun blazing on Spanish tiles and terracotta, all bestrewn with inflated Father Christmases and illuminated reindeer. A guy in a Stetson stops his car outside the local mall and  encourages me to get in “for a ride round the block”.  Bruce persuades a “friend” to drive me to Miami for my Caribbean cruise. He is 73 and immediately confides that he has a girlfriend, as he doesn't get enough sex from his wife. But he is about to dump the girlfriend (66), as she's too pushy. He is taking testosterone injections but doesn't believe in Viagra. Would I like to fill in?

Back from my cruise and great weather, I think, but no, the locals say that winter has set in  and now it's only 70 degrees. We all put our coats on and complain about how cold it is. We take a day trip to the Everglades. The Everglades National Park is the largest tropical wilderness in the U.S. and among the largest in the Americas. It's a string of wetlands with a unique and fragile ecosystem. in the southern part of Florida, The system begins near Orlando with the Kissimmee River, which discharges into the vast Lake Okeechobee.

On a good day you can the American alligator, American crocodile (yes, both), American flamingo, Roseate spoonbill, Florida panther, bottlenose dolphin, and manatee. But the alligators don't like the weather either. They hide in the grass and so all we see is the odd turtle and an osprey or two from our airboat tour. We bump along deserted mangrove canals. Then we sit in the sun and listen to a dog barking along to Jungle Bells. Albert, the (academically inclined) egret swoops down, to be fed fish at a dollar a pop.

I have discovered, that after paying the exorbitant sum of £80 for a small packet of malaria tablets, I have managed to leave them in the bathroom cabinet - at home. Bruce is sorting it. He has also just danced up to me and given me a vitamin B12 injection; he says it will do me good. I am surprised to say the least (I am not fond of injections) and not impressed. Especially as he is still pursuing me everywhere telling me that he knows that I do fancy him really.

Next stop Chile and Easter Island.