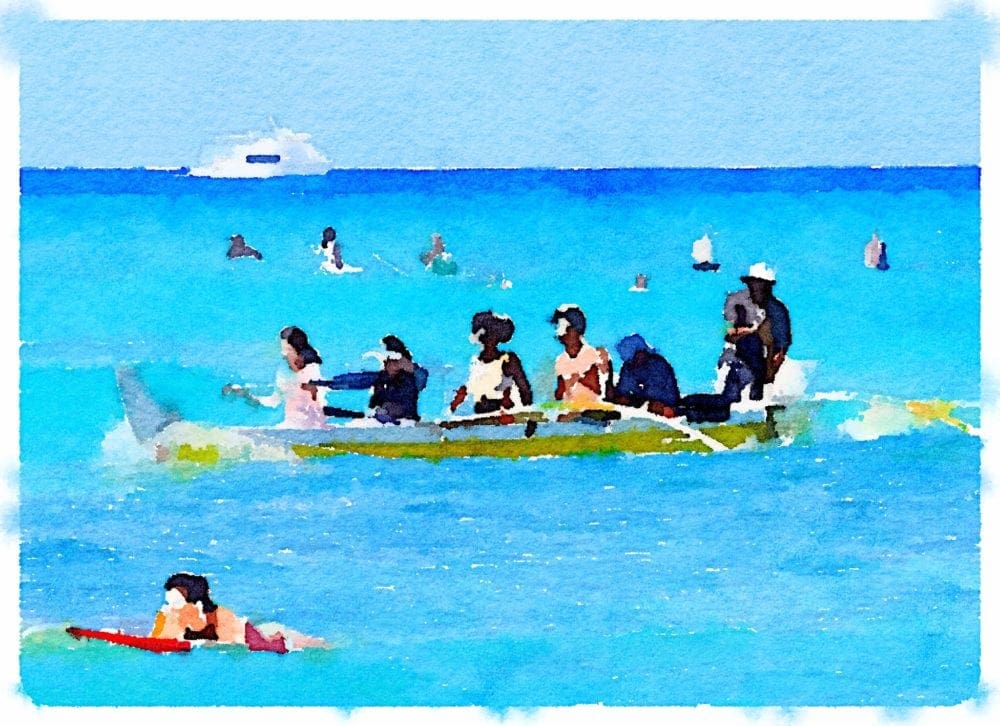 Hawaii is some 2,000 miles from the U.S. mainland. And American airports don’t get any better. There’s a new international terminal at Los Angeles airport - very Frank Gehry - but the queues are the same and so are the security men on a power trip. O good, machines to check your passport electronically I think, forgetting that I was fooled by these last time. And just like the last visit I queue up for the machine and it checks my info and takes my fingerprints and prints me out a receipt and then I have to go and queue to see an immigration man (who is abusive to me as I have the temerity to go to the counter before he has called me) who does the same thing all over again.

And my connecting flight is delayed once and then again. There seems to be a problem in Honolulu. I hope it’s not the weather. I’ve read there’s a hurricane brewing in the East Pacific. I’m already utterly confused by the time. Honolulu is eleven hours behind the UK so it’s going to be a long day.

At least my transfer representative is waiting. It’s a shame that the car isn’t. It’s a bigger shame that when he does arrive half an hour later he takes me to the wrong hotel twice before I direct him to the right one. A very long day indeed.

Hawaii is the only state outside North America (it's in Oceania), the only state that is an archipelago, and the only state in the tropics. It's known a the aloha state. (It means 'love'). Hawaii comprises nearly the entire Hawaiian archipelago: 137 volcanic islands spanning 1,500 miles. The state's ocean coastline is consequently the fourth longest in the U.S., at about 750 miles. The eight main islands, from northwest to southeast, are Niʻihau, Kauaʻi, Oʻahu, Molokaʻi, Lānaʻi, Kahoʻolawe, Maui, and Hawaii. The state is named after Hawaii Island, (as is the archipelago), but this is now usually referred to as the "Big Island" or "Hawaii Island" to avoid confusion with the other meanings.

Hawaii is also one of four U.S. states that were once independent nations ( the others are Vermont, Texas and California.) In 1778, British explorer James Cook was the first known non-Polynesian to arrive at the archipelago. He named this area The Sandwich Islands. Cook was at first treated as a god, but the locals were disabused of this notion by the time of his third visit. Many of them had contracted various STDS from his crew, who were had been discovered to be both arrogant and mortal.

So, Cook was murdered, though the story that he was eaten is untrue. It was tradition in these islands to remove the bones from the slaughtered body and these were duly and bloodily handed over to what remained of his entourage. Nevertheless, his death is still celebrated annually as Happy Death of Captain Cook day!. This early British influence is reflected in the state flag, which bears a Union Jack.

An influx of European and American explorers, traders, and whalers arrived shortly thereafter, introducing more diseases that decimated the once isolated community. Hawaii became a unified, internationally recognized kingdom in 1810, a unique melting pot of North American, East Asian and Hawaiian cultures. Until Western businessmen overthrew the monarchy in 1893. This led to its annexation by the U.S.A. in 1898. Hawaii didn't become a state though until 1959.

Two-thirds of the 1.4 million population of Hawaii lives on Oahu, home to the state's capital and largest city, Honolulu. My hotel is situated right where it’s all happening, in the centre of famous Waikiki Beach and my corner room overlooks the bay. The sand is golden and the clear blue sea is swarming with surfers, paddles and boards. Hawaii, today of course is renowned for tourism and surfing. I don’t know how they manage to manoeuvre the boards at all. Surely you must get taken out as soon as you set off, it’s so crowded out there.

I could sit on my balcony and watch it all going on. as I have a grand stand seat. But I resolve to walk round Honolulu. I might even climb the landmark volcano, Diamond Head, at the head of the bay for the view. It's nine o clock in the morning and already incredibly humid. (The surfers have been out since dawn). The soft sand is hard work. The Chariots of Fire runners were in better shape than me when they took on the beach (and don’t have jet lag) and I notice that no-one else is walking along it. My good resolutions quickly dissipate, even though it’s an interesting and scenic walk; I do at least reach the headland.

A nail bar is much more inviting, though I have forgotten that this is the land of expectation. ‘Shall I add the tip madam?’ the girl says as she brings the tab for me to sign. I’ve already added the mandatory 20% or you get black listed amount to my welcome fry up breakfast. Honolulu is as built up and crowded as I remember but there are more high-end shops now. The avenue is teeming with shoppers diving in and out of the glitzy malls and gallerias. It’s Vegas by the sea. They seem to me to be making all the diverse parts of the USA as similar as possible. Same buildings, same shops: The Cheesecake Factory, Dunkin Doughnuts, Tony Roma’s Ribs and so on. All the tropical hotels, though equipped with every possible comfort seem to have the same depressing décor, dark wood with beige tiles.

Waikiki - Playing Sardines on the Beach

Jet lag is closing in and I’m thinking of a relaxing sunbed on the beach, admiring the view as a cool sea breeze wafts by. Reality is the last space in a sardine can. There’s no shade, although there are casuarina trees blocking the view, and keeping out the wind. The swimming pool and concrete strip in front are crammed. So is the bar directly behind. The beach, though lovely sand (I’m wondering if this bit is imported - it’s softer and more yellow than the lower stretches) is a narrow strip and this is full of umbrellas that you have to pay extra for. They’ve already had my extortionate resort fee. Back to the balcony I think.

With Raye on the Way Back from New Zealand

Last time I was in Hawaii, I was on the last leg of my Round the World Trip with Raye. We flew in from Auckland. Raye's luggage was soaked as the airport handlers had left it out in the rain. Our room was full of drying clothes.

After exploring Honolulu we went snorkelling at popular but crowded Hanauma Bay State Park. This is a reef within a volcanic cone, which looks great from above. The marine life is worth seeing. But Wikipedia describes the area as over touristed - and they're being polite.

A must see is The USS Arizona Memorial, at Pearl Harbor. it marks the resting place of 1,102 of the 1,177 sailors and marines killed when Hawaii was attacked by Japan on December 7, 1941. The attack brought Hawaii global and historical significance, precipitated America's entry into World War II.

The memorial was built in 1962 and is accessible only by boat. It's a free visit run by the National Park Service. The building straddles the sunken hull of the battleship, without touching it. There's a video shown and it's a generally solemn occasion. Though somewhat marred by all the Japanese tourists grinning. They own most of the hotels in Oahu now anyway.

A Tour of Hawaii

I also took a small plane ride  round the other five main islands: Kauai,  Molokai, Lanai, Maui, and the island of Hawaii (Big Island)  Amazing views. There were pineapple plantations (Del Monte), Father Damian's Leper colony on the towering cliffs. Volcano flows on Big Island (still glowing as dusk fell) and the volcano observatory at Hilo. It was great, until we hit end of the day warm current turbulence.

Last time I went onto San Francisco and home. This time I'm at the start of a journey. Up at four, to catch the plane to the Marshall Islands. At least the bus turns up. Aloha the driver’s sign says. Don’t forget to tip me. The queue at security is long. They open a new channel just as I get to the scanning machines. I’m not sorry to leave Honolulu. Too many people and too much tipping.