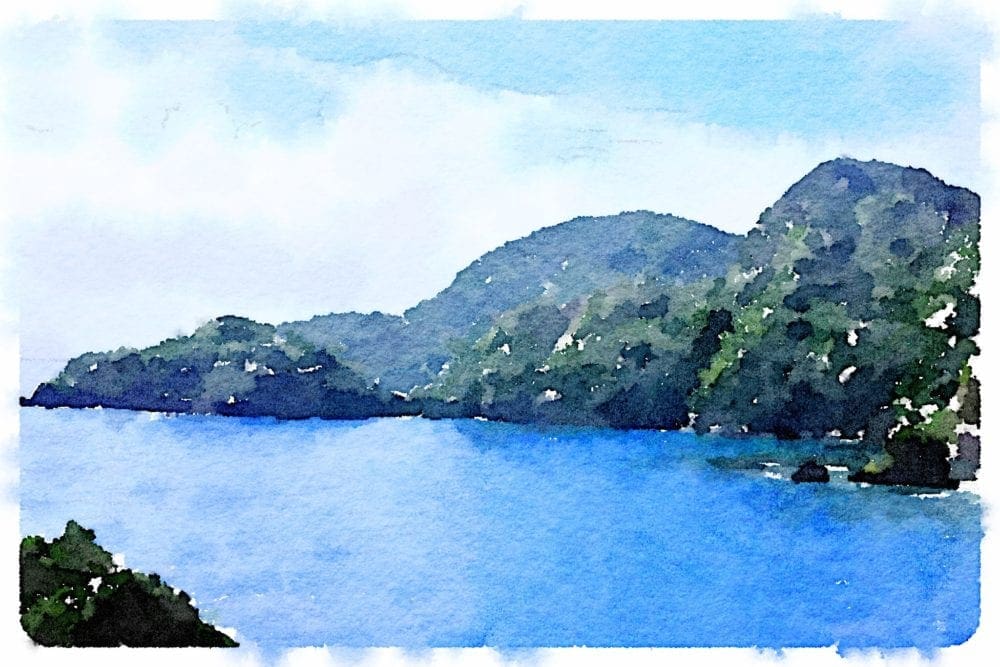 Trying Not to Overeat in American Samoa - South Pacific 9

Back in Samoa - Surprisingly

I didn’t know I was returning to Samoa at all until I got my travel documents. Pago Pago via Samoa. Then I noticed that I was being met and transferred between airports. I wonder why I thought. When I arrive I discover that it’s actually an hour’s drive between them. It’s a pretty drive by the sea and it reminds me how well tended Samoa is, how bright and colourful. On the surface anyway.

The driver asks me how old I am. I’ve invented a family as I usually do out here and in Asia. It’s much easier as single female is a totally alien concept.  Fagali’i, the airport for Pago Pago is located at the closest point to American Samoa. There are planes every 15 minutes, so I’m struggling to understand why mine has been booked so late. I have three and half hours to wait.

The driver has made a hasty exit. He seems disinclined to entertain me and anyway he is disgusted with me because I told him, under interrogation, that I don’t go to church. I should probably start lying about that one too.  I’m very fed up with hanging around in stifling airports. There are no Aussie bankers to talk to here, the ceiling fans don’t work and the benches are crammed full with Samoans. I think American Samoans are even larger than Samoans. The floor is very hard.

Getting to American Samoa - The Longest Day

In the departure lounge in Apia a cynically pessimistic little Chinese man carries out a running commentary on how most Samoans need two seats and won’t be able to exit the plane door without pushing each other out. He says that the McDonald’s in Pago Pago is the highest grossing franchise in the USA. He has a New Zealand passport but now lives in Samoa (Auckland is too cold he says).

During the flight from Fiji via Western Samoa, I’ve gone back in time and it’s now yesterday again, as I’ve crossed the date line once more, arriving in Pago Pago (say it Pahngo, Pahngo, but commonly just Pahngo). American Samoa is a day behind Western Samoa, as it needs to stay in line with the mother country.

Perhaps the time machine effect explains why I’ve arrived in American Samoa, but my luggage hasn’t, even though it was another of those little twin otter planes that made the hop (so much for me thinking that I had finished with small planes). The men at the Polynesian Airlines office aren’t really bothered. Everything is done at snail’s pace. They aren’t going to die of stress, though possibly heart disease. They tell me it may turn up on the next plane, which is the last one. The hotel driver is now on the case - I hope!

Mr Chinese Pessimist assured me that American Samoa is a dump and I will be glad to leave. But he also told me that my hotel driver wouldn’t turn up and he’s been really helpful. He managed to retrieve my bag so I went to sleep happy. I shall find out the truth on my island tour today.

Today’s geography: this volcanic island is called Tutuila, the capital island of of American Samoa, most of it comprised of steep peaks. The capital town is Pago Pago. There isn’t a road round the island, just a few routes over the top of the mountains to the waterside villages in the east. My driver was going to be Rory, but he’s out of the country, so I have Rory Junior instead. He’s extremely sweet and is very patient, sitting waiting for the rain to stop, so I can dash out and take pictures. It’s been pelting down all day.

Almost all of the land area of these volcanic islands — from the mountaintops to the coast— is cloaked in old world tropical rainforest. A section of forest in Tutuila near Pago Pago is designated national park; about 4,000 acres of the national park is underwater, running to the other islands. We manage a few viewpoints and pick out what we can through the clouds. The emerald mountains probably look stunning with the sun on them. There are a couple of pretty motus and some rock formations with arches in the national park. The most striking chain is known as the Cockscomb - its a perfect description of the tall peaks with their steep sides strung across the ocean. The official name for the last section is Pola Island.

There's a national park trail to view these. The instructions say 'Due to unfriendly dogs, please drive past the last house at the end. of the paved road in Vatia Village. This rough section of road will lead you to three exhibits and the trailhead.'

There are indeed dogs, racing the car through the pools in the road created by the incessant downpour. The beach here is one of those where every boulder wobbles when you step on it and threatens to turn your ankle. It’s a supremely inelegant way to travel. But it's a great view.......

A Fishing Spear to the Rescue

We even attempt some snorkelling, off a back volcanic beach, figuring we are wet anyway. However, the waves are too large, the current too strong and the coral not really worth risking one’s life for. Rory Junior shows me how to use his fishing spear to haul myself back into the beach. The beaches are pretty from a distance, if covered in detritus.

We tour the mountain roads, but everything is very quiet, other than a couple of young coconut pickers. There are several remote villages on the other side of the mountain only accessible by trails and definitely not in this weather. The flatter pockets of land that form the habitable areas are crowded with houses, rondavel style meeting places and churches. Unsurprisingly, much of the island reached by tarmac is very Americanised, with chain stores and advertisements.. There are some colourful gardens, but nothing as immaculate as those in Samoa.

Pago Pago - The Deepest Natural Harbour in the World

Mr C.P’s. judgement is harsh, as applied to the whole island, though only marginally so in relation to Pago Pago itself. The capital spread along a potentially attractive natural harbour, the deepest in the world. There are container docks and some ugly buildings and huge tuna canneries, which smell disgusting. The workers are outside on benches taking their break, all wearing plastic hair coverings.

Rory Junior tells me about the tsunami in 2009, when he and his family drove up to the high marshalling point and watched the waves roll in. He said there was no official warning - they just saw it coming and ran; he still has nightmares about it.

Back at my hotel, I have arranged that the driver will take me to the airport to check in at six and then I will come back to the hotel restaurant for dinner. The flight back to Honolulu and on to finish those Fifty States isn’t until 23.30, but check is open at several slots during the day as the Samoans travel with so many boxes. The plan fails, as the driver disappears and I have to get a kind lady in the airline office to call the hotel and ask them to track him down. I’m tempted to ask for yesterday’s tip back. When I finally get back to the hotel there are no tables left in the restaurant. And I discover that I’ve left my jacket at the airport. At least the driver can redeem himself by going to find it.