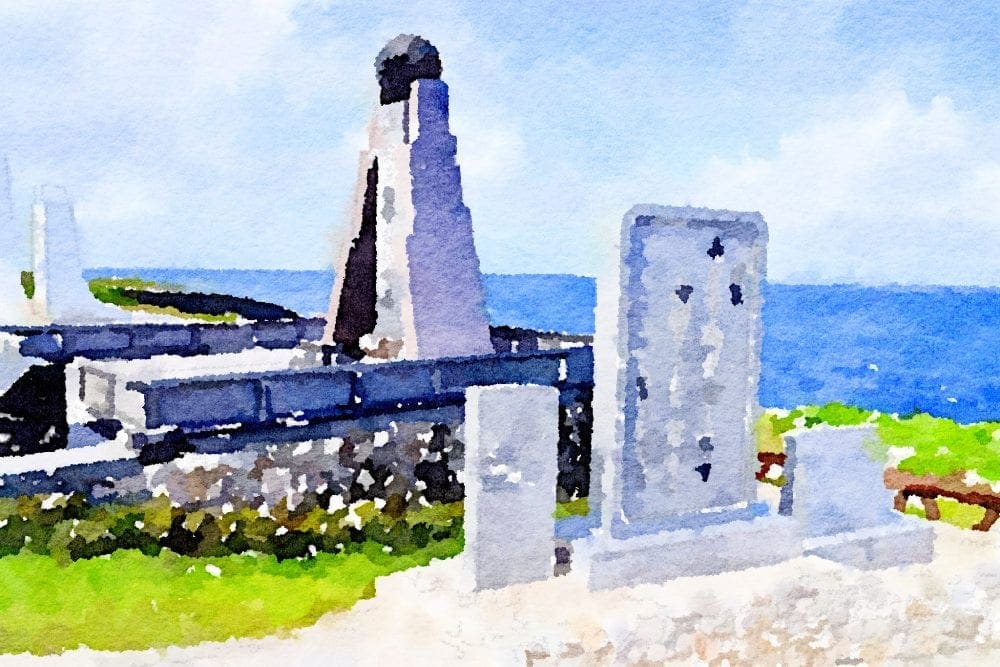 Immigration isn’t quite the usual American interrogation. The officer is in convivial mode. He notes that I had been to Iran (Ha!) and starts wittering about Moslem terrorists. He confides that a man has tried to blow himself up in Manhattan today with a pipe bomb (I know, I read the news). ‘Idiot,’ he goes on, ’he couldn’t even do that properly. It’s easy enough to make a decent bomb.’ And he proceeds to tell me how to do it. I can’t believe my ears. He’s either very bored or this is a cunning plot to see if I am overly interested. I collapse into bed at 4 a.m.

Is Saipan Part of the United States of America?

What to Do in Saipan?

You can see Saipan in a day. The World War II sites are interesting and the Suicide Cliffs are poignant. There are good views across the island from the highest point. Then head for the beach!

Trying to Get to Saipan - Mainly a Very Long (and Probably Boring) Rant About British Airways....

Today, I’m witnessing a text book example of how not to manage a business. British Airways have soared to 1 out of a 100 for customer service. They have cancelled virtually every single flight out of Terminal 5 today but they’ve done it surreptitiously, one at time, so the flight departure board isn’t a total sea of red and the queue of irate passengers waiting to get rebooked lengthens gradually. Their announcements only say that ‘some’ flights’ have been cancelled. Harrumph. My flight to Seoul, scheduled for 1 pm is delayed and delayed until, several gin and tonics later, it’s cancelled at 5 pm.

I’m told to queue at the guest services desk in the lounge to re-book. There are five computers, but only one person actually servicing re-bookings. Other BA employees drift in and out, but seem to do nothing. Guest relations ladies are confused and can offer little information other than passing on the horrifying news that there is a mountain of bags downstairs and it could take up to two days to retrieve our luggage via the gate. So not the remotest chance of cancelling and re-booking ourselves.

The advice is to stay in the queue, re-book and hope the bag is tracked onto the new flight. So I do. The processing is taking roughly 20 minutes per person. Sometimes the line stops moving altogether. There are a few officious announcements, and folk are understandably irate. One particularly depressing announcement informs us that even if we leave the lounge we won’t be able to get out of the airport as we have to pass through immigration, which is locked solid. ‘Stay in the lounge and have a drink’. They regret that advice later as time moves inexorably on and we are told that the re-booking desk will close at 10 pm. The queue extends right to the other end of the lounge. Peeping out, we can see that things are even worse downstairs. The alcohol and food are quietly removed.

They section off the front part of the queue and tell the huge snake behind it to go away, they will not be dealt with today. There is, understandably some dissension. ‘Nothing we can do’, the staff mumble. The queue goes even slower and I’m not convinced I will be seen before the deadline, even though it has now been extended to 10.30. I’ve been standing in line with an American, who I’ve dubbed Philadelphia Man - that’s where he’s going - and three guys, all Seoul bound like me.

There’s an engineer from Bristol and two cameramen going out to film preparations for the Winter Olympics. Which they fear will be finished by the time they arrive. (Their cameras are in the mountain of luggage.) One of them is Dicky Davies’ (World of Sports) son. We have a little wine and cheese party on swivel seats, inching them along with the queue. A Frenchman raises his voice a little, whilst understandably requesting that BA deploy more staff who can man the computers. A manager tells him she will call the police – they will be armed- if he speaks to her like that. And she does. Ridiculous. No giving of information, no soothing, no looking after clients, just staff avoiding confrontation and sidling away.

The kind lady manning the one re-booking computer agrees to stay till eleven (she is the 1% that BA scored) and glory be, she re-books me just before the Cinderella hour. Korean Air, tomorrow evening. I’m not risking BA again.

I wave good bye to my queue comrades. The cameramen are going via Hong Kong tomorrow- good luck to them- it’s a BA connection and they have already started cancelling tomorrow’s flights. Now, all I have to do is get out of the airport. A scurrying shop assistant tells me I need to exit via gate 20 - I don’t know how he knows this - but no-one else has been thoughtful enough to pass this information on.

Down the steps and then I spy the immigration queue. It is truly horrendous. I take the channel for transit instead and then notice, to my delight, that the line for the EU electronic passports is virtually empty. This whole melee consists of poor stranded foreigners. So I thread my way out and emerge landside. I’ve contemplated sleeping here, I’ve been told there are no hotels with vacancies this side of Gatwick, but airside has been totally closed down and landside is teeming. It will be murder.

So I try Hotels.com and come up with one in Windsor, only 11 km excellent. I will use Uber. Who accept the booking and then mysteriously the approaching car vanishes in a whirring app dot. As does any possibility of a replacement. There is a long line of taxis waiting- hurrah - but an even longer line of folk waiting to take one. And the system must have been organised by BA staff- well it is Terminal 5 - as the process for loading and unloading is tortuous. I wait for an hour in the sub-zero temperatures talking to other passengers. It seems that other airlines have been running, if behind schedule. It’s only BA that have cancelled nearly everything.

Two ladies in front of me were actually on the tarmac for four hours before being de-planed again and they report that a flight attendant told them that some of the pilots had walked out, while the planes were being de-iced. Finally, I reach the front of the queue, I haven’t quite qualified as a slush puppy. 11 kilometres won’t cost much will it?’ ‘Seventy five pounds flat fare,’ the female driver announces as we leave the airport. ‘I can take you back if you don’t want to do it’. O yes-to the back of the taxi queue. What a glorious day.

Dec 11 Return to the Front

The hotel restaurant isn’t much better than the British Airways terminal. Its freezing cold- we’re all sitting here in our coats. There’s gas fire in a tiled Victorian surround, but I’m informed that it doesn’t work. Neither does the nearest radiator. The scrambled eggs are cold and congealed and the hash browns rock hard. Most of the other chafing dishes, tantalisingly labelled sausage, bacon etc. are empty. The waitress brings me cold toast and tells me she will inform me when the dishes are replenished. I slurp runny yogurt and sour fruits of the forest while I’m waiting. Half an hour later she nods at me. There are fresh eggs and a platter of charred bacon.

My plan is to check in as early as I can to allow maximum time for my bag to be tracked down. But all in vain. There is eye rolling at check-in when I inquire if they will be able to locate my bag today. I’m not optimistic. At the gate it is clear that no-one has made the slightest attempt to load it onto the plane. It’s still in a great heap somewhere. Even if it follows, catching it up with me will be a nightmare.

And I’m away for seven weeks. I was concerned about flying to Seoul’s airport at Incheon in any case, as it’s situated right next to the North Korean border. Then I’m going on to Saipan and Guam, in theory, so Trump has another week to keep his finger off the nuclear button before I’m clear of the possible disaster area.

This day came and went very quickly. Korean Air was very comfortable, with great food – even steaks cooked perfectly to order. (BA take note.) Though the entertainment consists of  very old family film. The counter clerks at Seoul are solicitous and super-efficient. (BA take note again.) I have every confidence they will deliver my bag to me if they possibly can. I just don’t have any confidence that BA will find it and get it out here. Déjà vu at Incheon airport as I wander around looking for something good to eat. Pork and rice is a welcome discovery.