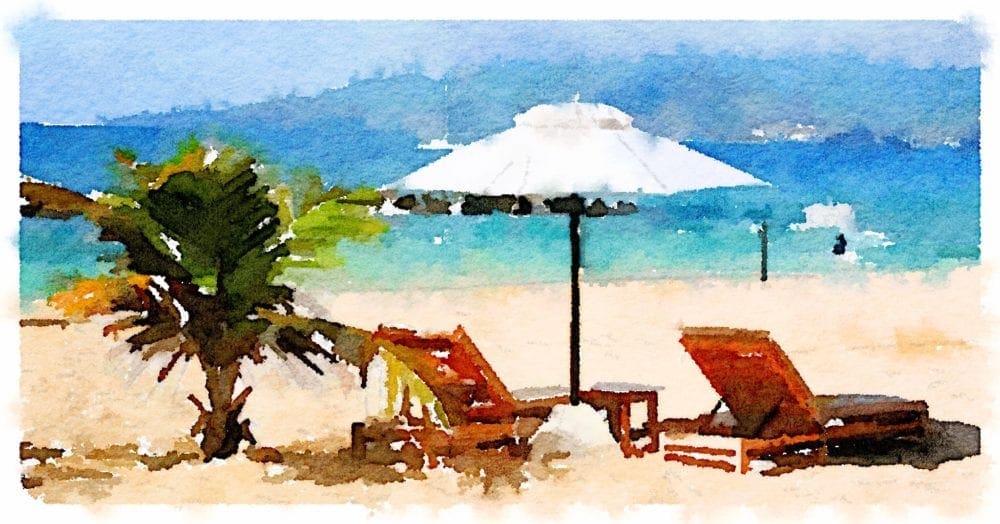 Grenada - A Solo with Singles Holiday

Well, I still don’t seem to have worked out how to propitiate the rain god. The weather hasn’t been great here in Grenada. The red flag is wafting in the wind still as I speak. But I’ve had enough sun to get a tan.

The hotel is nice, but I’m not sure who rates highest on the scale of importance, the staff or the guests. I’m only here for a week and so far we’ve had the staff children’s party all over the beach and the staff dinner party, so we all had to eat fast and early, and the corporate do in the beach restaurant, so we couldn’t use it at all. We’ve also had no hot water for two nights. There was a burst pipe. I’ve just washed my hair in some coppery coloured liquid coming out of the tap at two centimetres  a minute. I am off to dry it and see if I’ve now got auburn highlights.

So let's talk about Grenada. Grenada is one main island, also called Grenada, and several smaller surrounding islands (the principal small islands are Carriacou and Petite Martinique). It's at the southern end of the Grenadines chain. It's slightly confusing. Most of the Grenadines belong to St Vincent and the Grenadines, but a few of these islands belong (as one would expect from the name) to Grenada.

Christopher Columbus sighted Grenada in 1498, during his third voyage to the Americas. Before the arrival of the Europeans, Grenada was inhabited by the indigenous Carib peoples. They successfully resisted colonisation until the French took over in 1649. Over a hundred years alter Grenada was ceded to the British under the Treaty of Paris . British rule continued until independence in 1974. There was brief interlude in democracy in 1979 when the Marxist–Leninist New Jewel Movement overthrew the government in a bloodless coup d'état and established the People's Revolutionary Government (PRG), headed by Maurice Bishop. Bishop was subsequently arrested and executed by members of the People's Revolutionary Army, prompting a U.S.- led invasion in October 1983.

It's believed that the name Grenada is an anglicization of Granada, after the Spanish city.

I wander up beautiful Grand Anse Beach lined with with resorts and bars and poke around the little boutiques and stalls in the spice market. This is yet another of those beaches that feature on the Best in the World lists. I've tried swimming on my own, exploring the underwater sculpture park (which sadly is not very exciting).  but the lifeguard is determined to accompany me, to 'make sure I'm safe' and keeps popping up at my side.

At the other end of Grand Anse Beach is the capital, St. George’s, with its colourful homes, Georgian buildings and early eighteenth-century Fort George. A sunset boat cruise round the picturesque, but narrow, Carenage Harbour, with the compulsory rum punch, is relaxing.

A car around the hilly main island makes a better escape. Grenada is volcanic, with crater lakes, small rivers and waterfalls. The weather is still not great, but there are flowers aplenty and grand colonial houses to visit. Grenada has been dubbed the “Spice Isle,” because it is home to numerous nutmeg plantations, as well as the usual sugar cultivation , mainly for rum. We stop for some time at the River Antoine Distillery.

But the highlight (?) of the trip has definitely been Stalker Man. (He used to be called Twelve Contender Boatman, as he told me he had 12 women vying to be crew on his yacht trip). Date One in the UK I told him I was coming here. I only saw him three times. So when I turn up there he is, waving at me from the terrace.  How weird is that? He is on his mobile so I just nip by and go to my room. So then he goes all anxious and avoids me, just hangs around the bar talking to all the singles, which makes it very hard for me to join them too - great.

Instead, I hang around with the other new arrivals at the opposite end of the bar. There are, at least good margaritas. A few of those and we’re all under the bar. And I tell them about Mr. Stalker (who is also called John by the way) and they decide I need protecting, especially as he is hanging around. So after midnight one gangly 33 year old (nice eyes though) insists on escorting me to my room. And makes a pretty determined pass outside the door. I tell him that this is not a good idea and he should go to bed, though conversation is a bit difficult as he’s got me pinned against the door. When I’ve persuaded him that’s not an invitation he departs. Next he proceeds to sulk for the rest of the week, so that’s the other group I can’t join either now. Excellent.