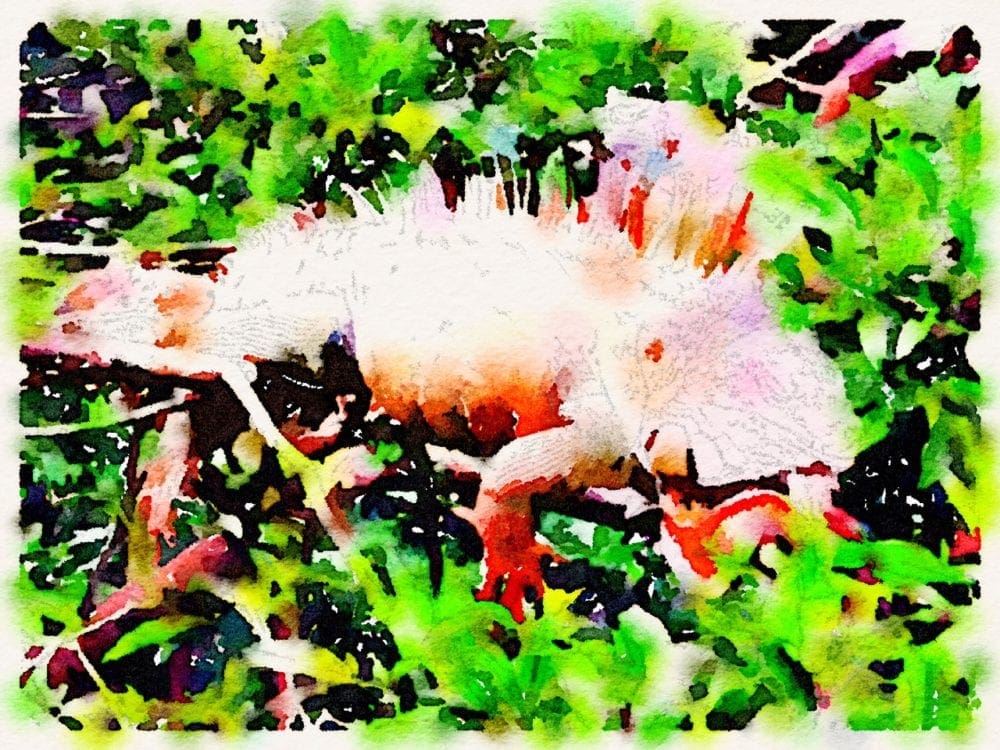 Our tour group is travelling from Panama to Guatemala. It's a long day’s drive from Panama, crossing the border to Costa Rica into the Caribbean lowlands and the town of Puerto Viejo Sarapiqui. (Artist is in the front seat again). Puerto Viejo lies at the confluence of two rivers sandwiched between two mountain ranges, so it functions as a trading centre for travellers. A mooch around reveals a little market and a motley collection of shops. Heaps of good piled on the floor like a jumble sale or, bizarrely, hundreds of cans of spam stacked on shelves.

Sarapiqui is one of several up and coming tourist destinations in Costa Rica, where outdoor adventure holidays are exploding. An early morning boat ride along the Sarapiqui River, out of town, at La Selva is peaceful, though frustrating. Various lizards, iguana and birds preen themselves on sundry branches as we drift along, sidling just enough to make photography difficult, if not impossible. Fortunately, there's lunch at a restaurant where a large mess of iguanas (another superb collective noun) snooze happily in the trees outside.

The classic cone of Arenal is enticingly visible for most of the next day’s journey, starkly barren and scarred by lava flows. Arenal is currently one of the ten most active volcanoes in the world. It has its own national park and is over 1600 metres high.

We skirt fertile farmlands, rich with a diversity of tropical crops, to our hotel at La Fortuna. Here, I’m housed in a little bungalow in the grounds, with beautiful tropical gardens and a great view of the mountain. Arenal is reasonably cooperative during our night visit, with rumbling worthy of a giant and amazing red splashes of lava catapulting into the sky. It growls gently until I drift off to sleep, but next morning I’m awoken by a huge roar. I leap out of bed, wrap a sheet round me (it's too hot to sleep with anything on), grab my camera and run outside for my own private eruption performance, complete with puffs of pink ash. It lasts over half an hour. (Arenal stopped erupting in 2010 and is now classified as dormant.)

We spend the day scrambling over huge boulders in lava fields and wandering in the rainforest in the national park. There’s an astonishing variety of natural wonders to admire en route, mesmerising patterns artistically drilled into leaves, frilly lizards, enormous spiders, more red frogs, hairy tree trunks, and lustrous birds. Our guides hold viewer and telescopes steady so that we can see clearly or photograph. Artist is always head of the queue. I don’t know how she does it. I can’t see her actually manhandle anyone, but she always manages to elbow her way through, is consistently  at the front of the line for the bus and is glued to the guide at all times, in case she misses anything.

After such an exciting day a girls’ visit to a spa to relax in the hot springs is very acceptable. It’s comfortably warm, with fountains and falls, but it doesn’t pay to look too closely at the green rimmed pools. Polish Bozena, a real character,  keeps us entertained. She's brought a cocktail and cigarettes in with her.

Next, we climb into the mountains of Costa Rica (guess who’s in the front seat?) to the farmore temperate Monteverde Cloud Forest Reserve. The reserve is lauded in guidebooks for its ‘staggering diversity of flora and fauna; 2,000 species of plant, 400 species of birds and 100 different species of mammals’ so I have high expectations. And I’m not disappointed as again, there is an incredible variety of wildlife to be seen. Humming birds, an emerald vine snake, huge ferns, epiphytes, bromeliads, woolly insects and all manner of other exotica, some of it very odd indeed, all make an appearance.

This is one of the last remaining places in Central America where the famous, resplendent quetzal is occasionally sighted and the happy guide does manage to track one down. It’s only easily discernible though a telescope on a tripod, but there’s a clear shot and semblance of a photo, where we can see the amazing iridescent colours. (After we have waited for Artist and prayed that the rare bird won’t take off while she is perfecting her shots.)

The long tail for which the quetzal is famous (and famously pursued for trade in pre-Columbian America) is not there, however. It’s not the mating season and it’s been discarded, as being too cumbersome. We also get to see the equally shy three-wattled bellbird, but he refuses to stick more than his beak over the edge of his nest. Where was all this wildlife hiding last time I visited Costa Rica - keeping warm maybe ?

The rest of the day is given over to ‘amazing optional activities' which include sliding down wires through the canopy, walking on suspension bridges strung at canopy height, or more sedately, a rickety chair lift through the canopy. I decide the latter is the (relatively) safest option.

We continue our journey, through velvety mountains to Rincon de la Vieja, located close to the Nicaraguan border. This is another active volcanic area, with lush vegetation and a plethora of  lagoons and craters, punctuated with steaming vents and pools of boiling mud. It’s still raining on and off, and the ground is extraordinarily muddy. I view the hot springs and the Rio Blanco Canyon climb and swing from a distance, and decline the offer of horse riding. I spend a very happy afternoon with my camera and the many extraordinarily vivid flowers and butterflies in the fields around the hotel. An enormous toad keeps me company. The wildlife in Costa Rica is truly amazing.