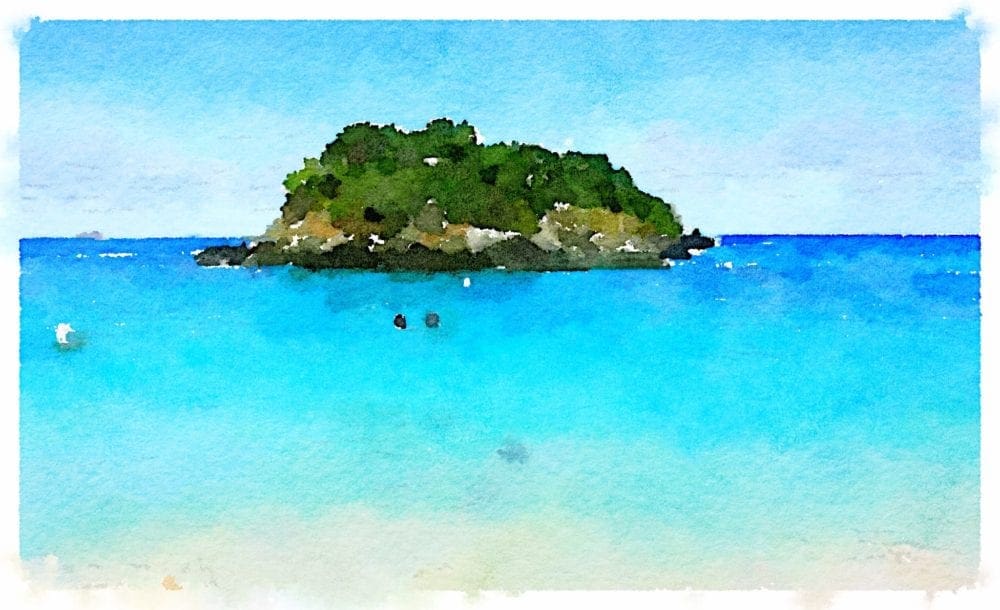 The Virgin Islands - A Beach a Day Part 1

I can see a scattering of gorgeous islands floating on blue, blue sea out of my window. Pelicans with huge scoop bills are diving above the palm trees, the broad avian equivalent of the A380. Villages are crammed with pastel coloured houses and criss-cross boarded drinking shacks. The island is mountainous so the roads are steep; the driving is crazy. The politest way to describe the service is diffident. Attitude abounds. The currency is the American dollar, the tourists are mainly American and the cars are right hand drive. But they drive on the left hand side of the road and the rest of the tourists are British - off yachts or cruise ships in the main. This is a playground for the rich and famous, with prices to match. So where am I? Tortola in The British Virgin Islands (BVI), naturally.

The islands were named "Santa Úrsula y las Once Mil Vírgenes" by Christopher Columbus in 1493 after the legend of Saint Ursula and the 11,000 virgins (martyred for refusing to accommodate the invading Huns). The name was later, helpfully shortened to The Virgin Islands, generally known as BVI to distinguish from the US Virgin Islands.

There are four main islands: Tortola, Virgin Gorda, Anegada and Jost Van Dyke, along with more than 50 other smaller islands and cays.

The rich and famous have come for the fabulous sands and scenery. It looks like a beach a day for the next three weeks:

Apple Bay is a minuscule stretch of white sand just across the road from my hotel. The surf breaks just off shore, mini pitons jut out of the bay and Bomba's Beach Shack churns out a heady rhythm. The hotel dining room is pretty - set in a renovated sixteenth century sugar mill.

The party island - no shoes necessary. Great Harbour lined with the most colourful, kitchest beach bars ever. And, a taxi ride over the hill, White Bay Beach. This one features on most of those lists of ten best beaches in the world. Pristine white sand and the requisite bendy palm trees. It's also home to the Soggy Dollar beach bar, so called because the sailors swim in from their boats with their money. This is where the Painkiller cocktail was invented. I will leave the recipe (and the scenes on the beach) to your imagination. I wander along to the little yellow church but it's hard to leave the gorgeous beach for long.

Besides, today, I am entertained by Jesse and Elias, two twenty something brothers from Canada. Their mission, it seems, is to consume as many Coronas as they can. When I abandon them, their deck chairs are barricaded in, by a sea of glass bottles. Painkillers not necessary.

This beach is also world famous because of the huge granite boulders picturesquely strewn along the sand. There's a perilous trail through the rocks to Devils Bay, a lagoon even more picturesquely encircled by still more boulders. The track is a bit like a twenty minute assault course involving much clambering through caves with low roofs, wading through pools, traversing rocks, with rope handrails and assailing vertiginous wooden ladders. A line of wounded emerge at the bay end, streaming blood from scraped limbs. I am fortunate to escape with a banged head.

It’s clearly a day for the intrepid. There are signs up forbidding swimming, because of the swell round the rocks, but this does not deter the dinghies from the many yachts moored offshore. I could fill a whole episode of You've Been Framed with videos of their ingenious and undignified attempts to land. Today's companions are Jeff and Kathy, a semi-retired couple from Cincinnati. She used to work for American Airlines so they get free flights everywhere. Grrrr...

Today, I am doubly intrepid as I venture up the coast in my rental car. It came as part of a package with the room, so it feels churlish to waste it on trips to ferries and back. I discover why there are two extra gears on the automatics here. The hairpin bends are almost vertical. The views over the mountain drops are good too - I think. I'm trembling too much to take them in. The island is arid and much of the vegetation is cactus. The one time I find a spot to park and scramble out I am impaled by a vicious aloe.

One road is so steep that the locals call it The Escalator - and refuse to use it. I decide to avoid that one, though there aren't any sign posts, so I can't be sure that I won't happen on it accidentally. When I do get up speed, I find myself swerving round a group of goats gambolling on the bits of concrete. Tarmac is too polite a description. It's a relief to end up in the crystal turquoise water of Smugglers Cove. Here, I share beach beds with Jan and Brad from California. They are still recovering from the cavernous potholes which are the unmade road down to the Cove - they have no inkling what bad roads are really like here.

I decide I'm finally going snorkelling - it's been too rough to try so far this week. However, a posse of locals originally from the UK, tell me that there's a bad rip tide over the coral when it's rough. And there's still a nasty swell. So, decision reversed, discretion is the better part of valour. The waves in the shallows though are perfect, balmy and soothing. The locals also tell me that the service here is a lot better than it used to be.

Back at the ranch, well, Sugar Mill, I decide to avail myself of the other complimentary part of my package - a bottle of local rum.

Thursday -  Honeymoon Beach - A Side Trip to St. John Island in the United States Virgin Islands

A scenic, if early, hop on the ferry from Road Town. the diminutive capital of the BVI, on Tortola. It’s all very Pirates of the Caribbean, sailing to Cruz Bay on St John Island across the narrow diving channel and hugging the palm lined coast of the Virgin Islands National Park. By far the shortest queue I've ever stood in for USA immigration - it’s only me. Cruz Bay is dinky, neat and hilly. The streets are lined with niche restaurants, boutique shops and chi chi guest houses. The little Wharfside Village mall caters to the cruise trade. Fortunately, the town is quiet today, almost too quiet.

The United States Virgin Islands were bought from Denmark in 1917, and virtually the whole of St. John is a national park endowed by Rockefeller. It's nearly all rainforest and white beaches, so today I take a trail through the park to Honeymoon Beach. And I finally get to snorkel; it's exceptionally clear. There are small rays darting and two turtles nestling in the rippling mini dunes of the depths. One of the turtles lazily rises to the surface right in front of me posing, huge and gorgeous against the blue of the sea. Naturally, my camera battery gives out as I press the shutter.

The brochures  say that missing Trunk Bay in the US Virgin Islands is like going to get Paris and not seeing the Eiffel Tower - it's another beach on the 'Best Of'' lists. I hop on one of the local taxis to get there. They are gaily painted converted trucks with half a dozen rows of seats out back. I'm the only passenger, so the trip feels very decadent, even if we do roll around a bit. The bay is certainly very pretty from the viewpoints above. It has a small palm tree bedecked island and a slightly beaten up snorkelling trail with plaques in the water.

Then a rush to get my ferry back to Tortola to catch the plane down to St Martin. It’s a longer route this time, via the northern Caribbean cruise capital, St Thomas. I spend my waiting time on the beach at Trellis Bay. It's at the bottom of the runway.