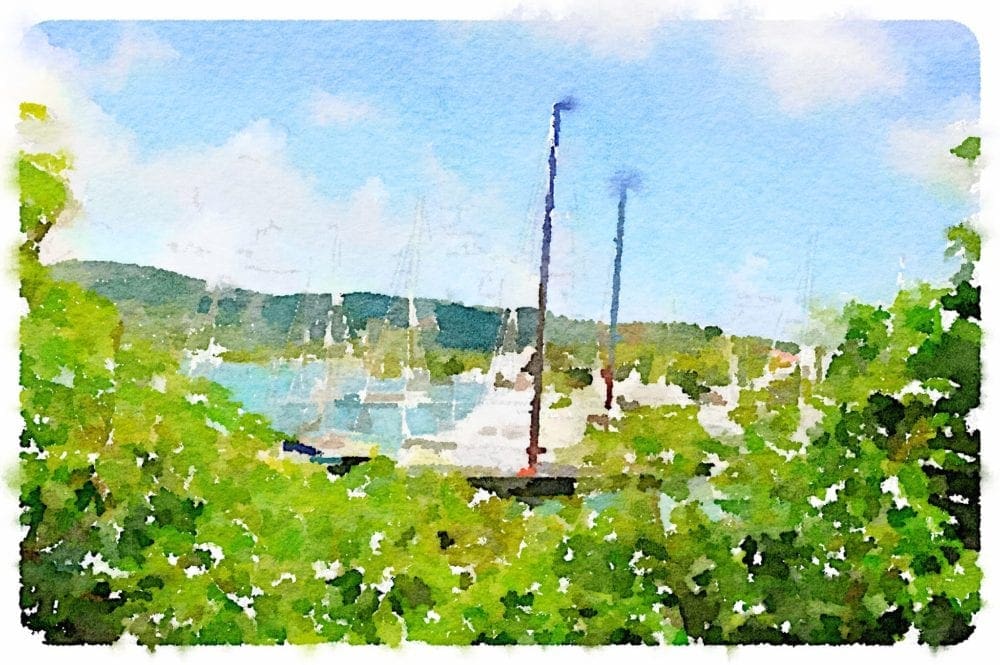 A Singles Holiday in Antigua

This was a 10 day singles holiday in Antigua, in a hotel at Jolly Harbour. Antigua is known as Waladli (or ‘Our Own) by the native population, but was named Antigua (Spanish for ancient) by Christopher Columbus after an icon in Seville Cathedral, "Santa Maria de la Antigua" — St. Mary of the Old Cathedral. Apparently, he made a vow to name many islands after aspects of St Mary that year. Antigua's economy relies largely on tourism, and it’s trying to position itself as a luxury Caribbean escape. The island's single airport, VC Bird Airport, is named after the first prime minister after independence in 1981.

The hotel itself was ok - a three star with an outdoor restaurant that was reminiscent of a holiday camp - wooden communal bench tables.

Most days I walked down to the beach, at Jolly Harbour. The little port is one of several on Antigua that serve yachties and there is a web of small canals here where the boats ply back and forth. It's an interesting stroll. This is a view taken from the helicopter when I went to Montserrat. You can see the harbour, the hotel and the supermarket!

The beach was prettier then that it is now, and much quieter. There were still plenty of beach bars, but the sand is exceptionally beautiful, powdery white. Wandering down to the point, watching the seabirds on the rocks is rewarding. I'm also on the look out for snakes as I've read that the Antiguan racer is among the rarest snakes in the world. I'm not sure I really want to see one. And no doubt they're sensible enough to hide up in the hills.

St John's, the Capital of Antigua

It was a singles holiday. I spent most of the time on the beach. But I did get about a little. The capital city, St. John's. is home to 22000 people. It has a deep harbour which can accommodate large cruise ships, so sadly (or not depending on your point of view) it’s a thriving cruise ship port. It’s one of the larger Caribbean metropolises with plenty of shopping malls as well as boutiques throughout the city, selling designer jewellery and high end goods. Fortunately, there’s also still plenty of Caribbean colour, with bright wooden buildings, markets and locals wearing Rasta hats.

There are also several museums, the Sir Vivian Richards Stadium, mostly for cricket matches, of course, a white baroque cathedral, a tiny Botanical Garden, a fort and the (slightly crumbling) Government House.

English Harbour on the south-eastern coast is perhaps the most famous of the harbours on Antigua. It's a good place to visit on a day cruise. This pretty and well protected bay provides protected shelter during violent storms and is the site of the restored British colonial naval station, "Nelson's Dockyard", named of course after Admiral Nelson. Antigua was eventually settled by the British, from St Kitts, and became Britain's "Gateway to the Caribbean".

Horatio Nelson, a major figure in Antigua history, arrived in the late 18th century with a brief to preserve this title. However, he got into rather too much trouble with the locals when he tried to enforce the Navigation Acts. These prohibited trade with the newly formed United States of America and most of the merchants in Antigua depended upon American trade. It put his career back a few years. The former Admiral’s House now contains the Dockyard Museum.

Round the corner is Falmouth Bay, yet another harbour. This one is where the rich and famous hang out.

As with much of the Caribbean Antigua rapidly developed as a profitable sugar colony. The only two surviving structures of the first large sugar plantation on Antigua are two restored and picturesque sugar mills. These have been incorporated into an open air museum at Betty’s Hope. The plantation was owned by the Codrington family who led the first British settlers.

Another must see on my tourist itinerary is Devil's Bridge, a natural rock arch near a village with the great name of Willikies. Here, as well as the arch, are natural blowholes shooting up water and spray powered by waves from the Atlantic Ocean.

I joined in with a boat trip to Stingray City. It seems compulsory now for tropical tourist areas to have these interactive ray sessions on the reef, where the fish are enticed with regular squid feedings. The rays burrow into the sand and then launch themselves against your body. They’re surprisingly velvety soft but it’s also a strange tickly sensation. There’s much squealing. I can’t help thinking of Steve Irwin getting killed by a ray. However, I’m told that the southern rays are so friendly that they’re known as the puppy dogs of the sea and love to be affectionate.

Later, I took the helicopter to the neighbouring island of Montserrat.

There were also a few bars. Maybe more than a few.