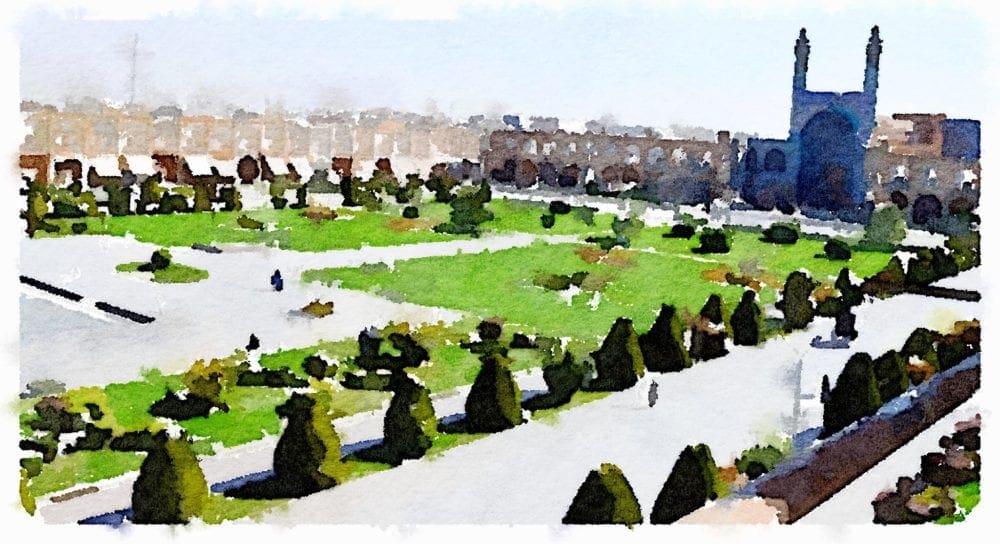 Obtaining a visa for Iran is a tortuous process that first involves filling in a complex form, and getting my photo taken in a headscarf. I then have to gamble on whether the consul in London will be open on the days it said it would be and try to second guess which days will be the most popular. It says it opens at two pm, three days a week. I turn up just after midday to find about thirty people already ensconced along the fence in Kensington Court. It’s a social affair as we gossip and share our travel plans. Just before two we are handed raffle tickets to maintain our order in line and we proceed indoors, the women all sheepishly sliding on headscarves, just in case.

There is a number count down display just like on the supermarket deli counter. But no one calls out any numbers and we are very British and organise ourselves into the correct order. Fingerprints and money are at one counter and then, finally money and form at another. It’s relatively straightforward, except for the whopping £150 fee, much higher than other nations I notice. An Irish girl in front of me pays about a quarter of that. My passport, with visa arrives safely a week later. Along with the information that I will now require a visa to enter the U. S.A. and this will also involve lengthy form filling and a day at the embassy in London.

Anxiety builds as I read the latest news bulletins on detained dual passport holders (not that I am one) and the instructions about what I must do and wear. I don’t want to get my ankle whipped by the morality police - or worse. My clothes must be loose and cover my bottom. I won’t be allowed into the country unless I’m wearing a headscarf. An entirely new wardrobe is called for.

The flight to Shiraz goes via Istanbul and the passengers adapt their attire as Iran grows nearer. All the women don their scarves, looking embarrassed, as the plane lands. The Iranians behind me apologise: “We’re so sorry you have to do this”.

Is It Safe to Travel to Iran?

Iran seemed very safe and calm to me (apart from the traffic in Tehran). But there are not insignificant restrictions for travellers to take into account (see below)

Iran is hardly an undiscovered destination. There are tour groups everywhere we go, each of them accompanied by the obligatory Iranian guide. Ours is called Pooran and she has been doing this a long time; she is extremely knowledgeable but talks interminably and in a monotone without, seemingly, drawing breath. She is also very controlling and our English (well Australian) tour leader is new to this trip. They bicker incessantly, mainly arguing about when and what we are going to do. Consequently, we are late to most places, and some of the drives, across unremitting desert are already very long indeed.

There are twelve of us, five couples/friends and an earnest young man who is half my age. Our reception by the locals is a little wary in Shiraz, even slightly hostile at times, in the markets, but grows warmer as we venture north towards Tehran. At times both men and woman attract our attention to quietly vent their frustration at the restrictions on their own behaviour. Wearing a headscarf is indeed very restricting. It’s hot and uncomfortable, as are the long clothes I’m swathed in. At the large mosques charming Imams affably promote their peaceful view of Islam. It is indisputably very calm everywhere. Maybe because there is no alcohol? The women look very elegant in beautifully tailored long coats and scarves that sit just so on the back of their heads, unlike mine. The men, on the other hand, seem to aspire to look like Mark Wright in skinny jeans and tight T shirts.

Other barriers to overcome:
• There is internet but it’s very limited. No BBC and no Facebook.
• The currency is difficult to understand. It's officially called a rial, and most of the notes printed are in rials but everyone talks and quotes toman, which are the same as rials but minus a nought – got it?
• Thronging groups of visitors at all the main sites - the tourist cafes are crammed. At one hotel there is chaos as all the wrong suitcases are loaded

Where to Visit in Iran?