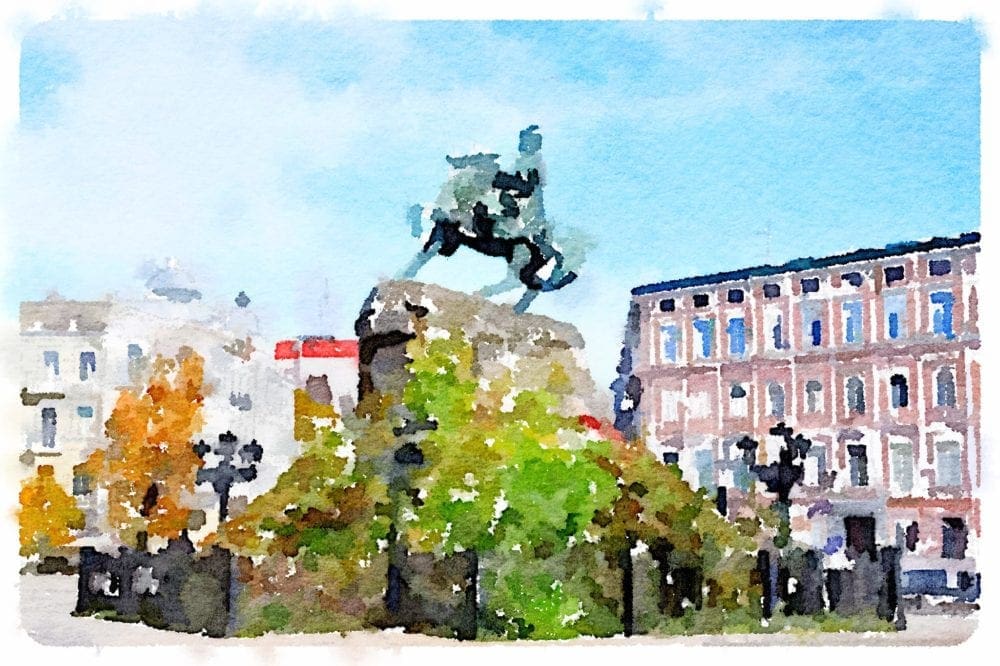 Ukraine is the poorest country in Europe alongside Moldova, suffering from a very high poverty rate and severe corruption. It's the second largest country in Europe (if you count Russia) and therefore has extensive fertile farmlands; Ukraine is one of the largest grain exporters in the world. It also maintains the third-largest military in Europe after Russia and France - it has to, because of ongoing conflicts with Russia since the pro Russian alliance fell apart in 2014 and Russia annexed Crimea. Ukraine has a long history. The territory of modern Ukraine has been inhabited since 32,000 BC. I'm on a lengthy trip, so I'm only visiting the capital, Kiev.

Kiev, the Capital of Ukraine - Friendly and Efficient

The journey from Minsk is amazingly quick. The plane takes off exactly on 1.30 and I’m in my hotel room in Kiev at 3pm. Astonishing efficiency at Kiev airport where they even manage to bid me ‘Welcome to Ukraine’ in immigration. I’m so early the taxi driver is still scurrying through the door trying to find his Susan Rogers sign. At first glance Kiev looks much more like the down at heel fraying at the edges city I expected from Minsk. But it’s raining and better weather is promised. Let’s see what the sun brings.

The staff on the hotel reception are very friendly and the concierge Ivan quickly sorts me out a private guide for tomorrow. Some of the sights are fairly spread out and a car will be helpful. As he reminds me, I’m only here once. It’s a good if unoriginal line to justify 45 dollars an hour; Ivan’s already famous on trip advisor for his helpfulness. (I’ve decided to pass on visiting Chernobyl. Kiev is quite close enough.) The bell boy has a blue military style jacket and he zooms off, not even expecting a tip. All is well.

At first it feels as if I’ve landed in the back of beyond location wise, but once I’ve worked out which way to go (up the hill) I’m soon in the humming part of town and wandering along Kiev’s main thoroughfare, Khreshchatyk Street, apparently referred to as the shortest yet widest main drag in the world. It is remarkably broad, but not as wide as the streets in Minsk, so I’m unimpressed. It’s closed for traffic today, there are police cars parked at each end so I can saunter up the middle and admire the brown mock renaissance buildings towering on each side. (As well as Soviet towers and a GUM department store. there are several street exhibitions, one on the history of Kiev. (the anniversary of the Russian revolution is approaching) and one that has a religious theme.

The Golden Globes of Kiev

Kiev is growing on me. It’s much more European than Minsk; I only see a few statues and very little brutalism (the odd Soviet style statue) with cobbled streets (well brick), tree lined squares and familiar chain stores. There’s an excess of neoclassical pillars too, as well as a multiplicity of gold domed churches and cathedrals, including the eleventh century World Heritage Saint-Sophia Cathedral. It’s an upmarket café culture but there are also more fancified McDonalds. The McDonald’s next to the main train station is claimed to be the third busiest in the world.

My hotel room is nicely furnished, not huge but big enough, and seems to have everything I require. Molton Brown toiletries. You can eat from the same menu in the main restaurant or the bar (which is very smoky) or the hotel vestibule (very opulent with piano). The menu itself is fun. Potatoes are listed under the heading ‘starches’. The waiter helps me choose local food – bortsch (which turns out to be from Ukraine not Russia) and shuba salad (herring and potato). It’s really good, with lashings more cream. There’s no Chicken Kiev though. They tell me that doesn’t come from Kiev. It is thought to be a nineteenth-century French recipe, brought to the east by Russian aristocracy fascinated by French cuisine.

Kiev, The Cradle of Russian Civilisation

Today, I’m off on a tour of Kiev, with my guide and driver. Both of them are called Alex, so that’s easy to manage. My guide speaks good English, is interesting and doesn’t go on too much, though he is passionate about his city. I’m given to understand in no uncertain terms that Kiev is the cradle of Russian civilisation. It was blessed by Andrew, the apostle, according to legend and, from the the late ninth to the mid-thirteenths century, was the capital of Kyivan Rus. Kiev was said to rival, Athens or Rome, with its own acropolis and was ruled over by the Rurik dynasty, The modern nations of Belarus, Russia, and Ukraine all claim 'Kievan Rus' as their cultural ancestors, with Belarus and Russia deriving their names from it.

I’ve also learned that Vitali Klitschko, the boxer is the current mayor of Kiev. Alex says he only makes very short speeches. That sounds like an advantage to me. He and his brother donated the very bright gilded angel on the top of St Michael’s monastery. The weather today is perversely and wonderfully, gloriously sunny (if brisk). All the golden domes are showcased to their very best advantage against a clear blue sky, with the faintest suggestion of puffy clouds.

First stop is the Golden Gate in a central square. This 'restored' edifice (it's not golden like the globes) was the main gate in the eleventh century fortifications of the capital of Kyivan Rus. It was named after the Golden Gate of Constantinople. The structure was entirely demolished in the Middle Ages and was rebuilt completely by the Soviets authorities in 1982. There were no pictures of the original so no-one has a clue if this building is a an accurate reconstruction. It's surrounded by plenty of statues.

But visiting Kiev is essentially a tour of churches and monasteries (both Ukrainian and Russian Orthodox - there was yet another schism). Like Rome, Kiev is built on seven hills (give or take a few) with catacombs below. Some of these were utilised by monks and hermits and later developed into monasteries.

The other main tourist attraction is the river walk alongside the River Dnieper, with great views across the water and the city. There are several monuments to the Second World War in the Park of Eternal Glory. It's a relaxing saunter.

The 11th-century Kiev Pechersk Lavra (Senior Monastery with caves) and pilgrimage site has more gold domes and candle lit subterranean passages, lined with the tombs of naturally mummified Orthodox monks and saints. You can even see some bones, peeking out of the elaborately embroidered coverings. If you’re a woman you have to wear a cloth tied over your jeans and scarf on your head to see them. If you’re a man the Russian Orthodox god doesn’t mind. He doesn’t get upset about miniskirts either, just women in jeans.

There’s also a charming bohemian area, up one hill lined with art galleries and little market booths and surmounted by one gilded domed church. Unsurprisingly, it known as the Montmartre of Kiev. This city definitely rewards wandering.

Alex has told me that I should spend the rest of the afternoon in one of the monastery museums, but I’ve had my fill of churches, so I'm going to be disobedient. The botanical garden is just down the road and I’m off in search off autumn colour. (Though there is the very pretty St Volodymyr's Cathedral to be admired on the way).

The garden area is verging on scruffy, relieved by a little faded orange foliage and the park is chock-full of locals enjoying the sun and posing for photographs. I check to make sure I haven’t been teleported to Japan.

The Bessarabian market is my last call, in search of a different type of colour. It’s mostly magnificent heaps of fruit and vegetables. The stall holders are happy for me to take pictures, but not happy to be in them. I can see elements of Asia intermingling with Europe here and outside. Many of the people thronging the streets have dark hair and brown eyes and there are huge underground shopping malls, warrens of trinkets and spices. It’s reminiscent of Tashkent.

I should have known better than to write nice things about air travel in Ukraine. I’ve been misled, by the superb hotel staff, into thinking all Ukrainians are super friendly. My flight to Yerevan goes out of a different Kiev airport, Borispol, some way out of the city. The city traffic is bad and the ground staff begrudging with their barked commands to self-check in. There are only four booths, the queue at the bag drop-off is long and the mechanical check in process duly replicated by the clerk. The airport is dark and the few seats already taken by men in leather jackets who smell of Turkish tobacco and play videos loudly on their phones. I'm on my way to Armenia.