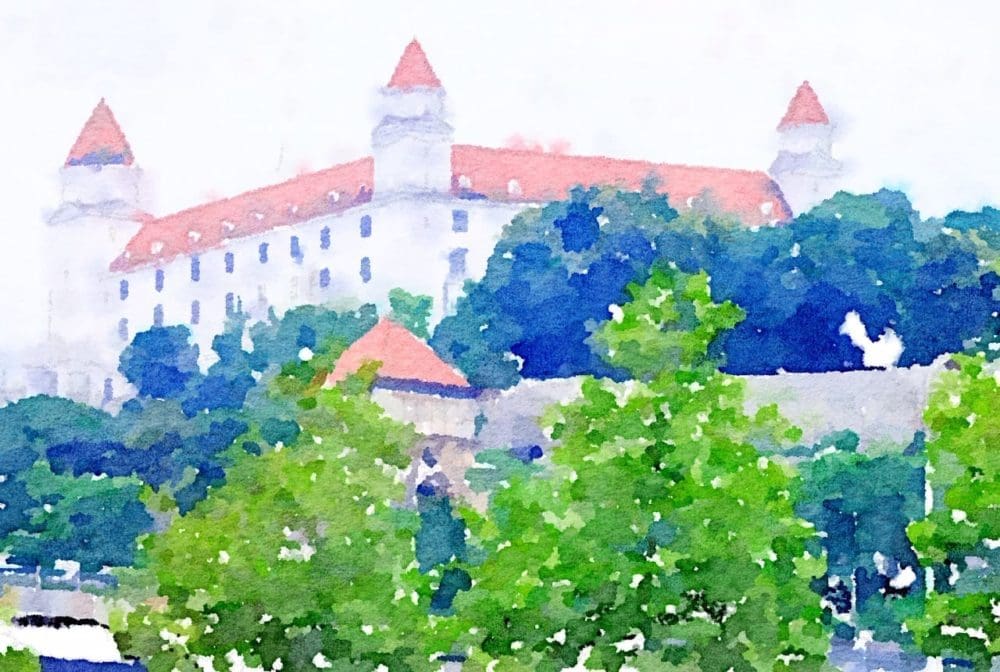 Home - Stories - Europe - Austria - Bratislava and up the Danube to Vienna

Bratislava and up the Danube to Vienna

I'm on a weekend break in Bratislava. But somehow, I’ve ended up on a trip up the Danube to Vienna. That’s what the lady on the desk suggested. It seems there isn’t much to see in the city of Bratislava. She says I can easily do that tomorrow. Bratislava at first sight seems ultra-modern, so I’m surprised to find that the boat is still being repaired and men in overalls are running around with welding irons. And then our speedy catamaran turns up and moors alongside my 'ship', which is actually just a glorified pontoon.

Once out of the urban area, and away from Bratislava Castle, an unmissable landmark dominating the city. Then more ruined castles. After all, there are more castles in Slovakia, by square metre than anywhere else in the world. The river passes through undulating wooded countryside, interspersed with the odd quarry. It’s a shame they’re not playing the Strauss waltz over the PA system. (Not for the quarries of course). And then another castle, impressive Devin, towering above a little red roofed town. It’s very pretty, despite the rain. I’m popping up on deck with my camera to brave a drenching every time I spot anything interesting from my (you have to pay extra) window seat. The waiters are getting us into the Viennese cafe spirit, bearing sachertorte and whipped cream to passengers too sensible to venture outside. 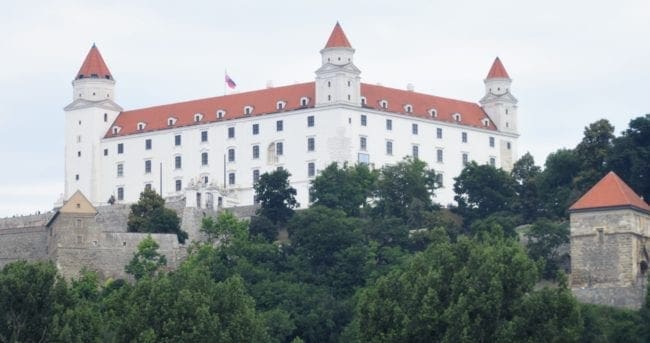 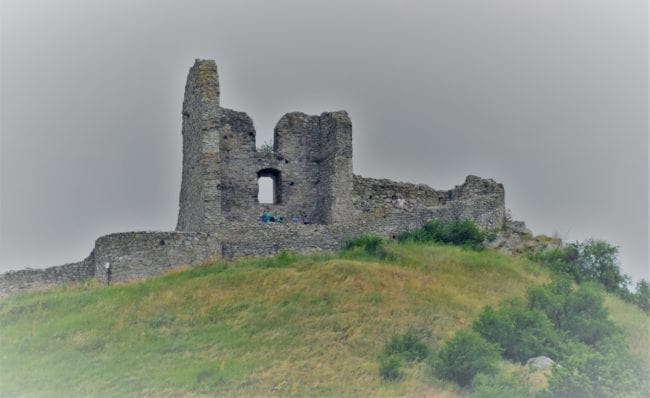 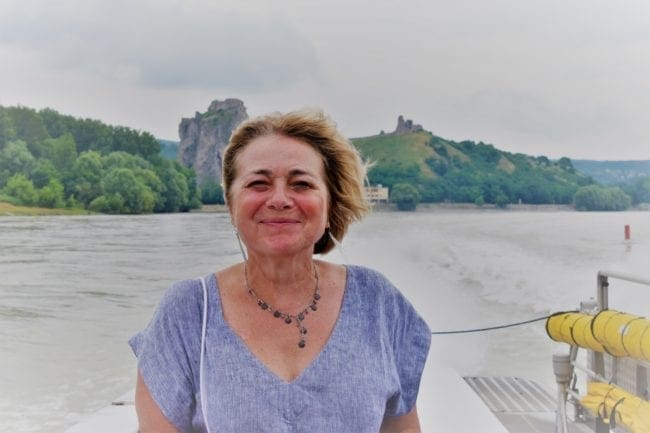 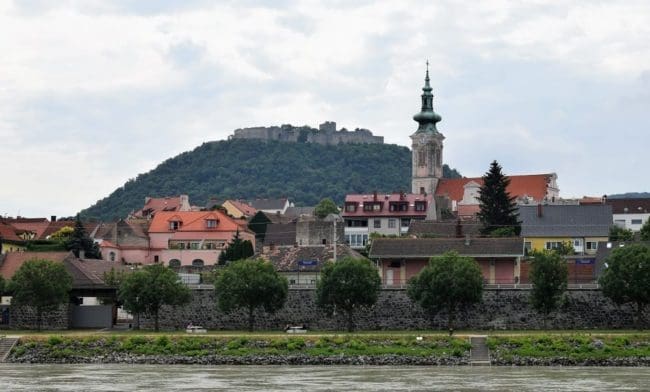 Vodafone informs me when we’ve crossed the border and we’re passing the eastern most town in Austria, Hainburg. This also has red roofed houses and a church with an onion steeple, as well as some famous walled fortifications and a crumbling castle on a mound behind it.

Next, the Danube National Park and then through the Danube Canal to the city. The narrow canal stretch is a bumpy ride and we are exhorted to stay in our seats while we lurch along.

This Means Nothing To Me
Oh, Vienna

Vienna, the subject of a haunting song by Ultravox and the setting for Graham Greene's most famous spy novel The Third Man. At one point Midge Ure pretended that his lyrics were influenced by The Third Man. Later, he admitted that he made that up. The song is supposed to be about a romance in an ominous dark place, which doesn't say much for Midge Ure's view of Vienna. Billy Currie wanted to write the accompanying music to be evocative of a late19th century romantic composer. According to Currie, Ure wasn't a fan of the classical romantic approach, and actually said: "This means nothing to me," So that's what he sang. 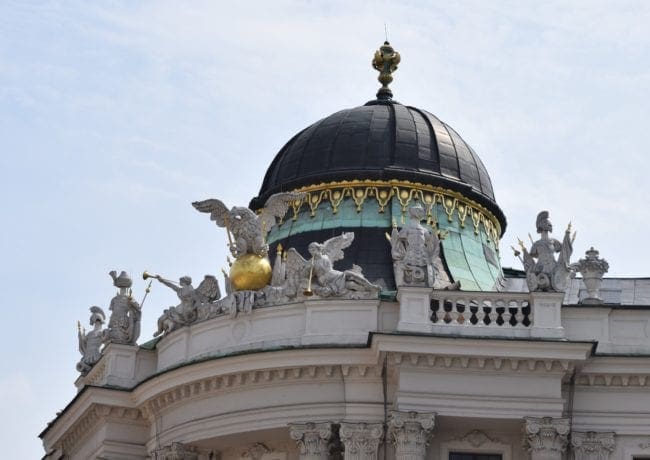 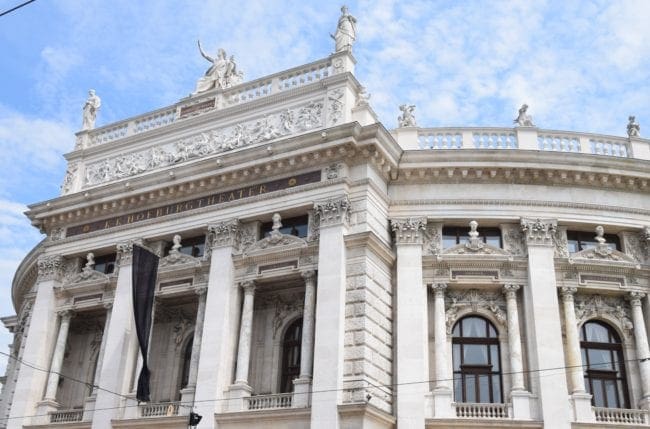 Oh and Vienna is also the capital of Austria with a long imperial legacy. It's a city of some two million inhabitants, home to a third of the country's population. Vienna's history goes back to Roman times when it was a military camp called Vindobona. It was an important trading centre in the 11th century, then the capital of the Babenberg dynasty and subsequently of the Austrian Habsburgs . It reached its peak in the 19th century as the capital of the Austro-Hungarian Empire.

Vienna is just as Graham Greene describes. We're still on the Danube. Harry Lime still lurks on the Ferris wheel in the Prater Park. (It was built in 1897). But I’d forgotten (sorry Midge) how gorgeous Vienna is. And Vienna is consistently rated high on those Most Liveable City in the World lists. I was last here, on my After the Berlin Wall Came Down Tour, a very long time ago. The baroque architecture is ridiculously grandiose, but at its best in the sun (which has gratifyingly appeared). 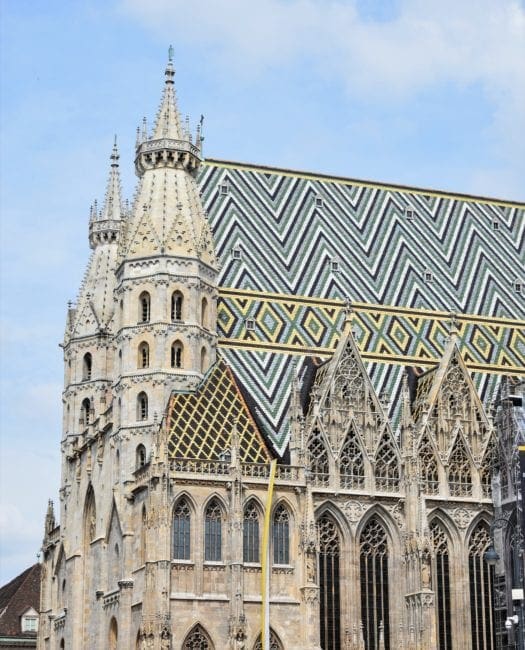 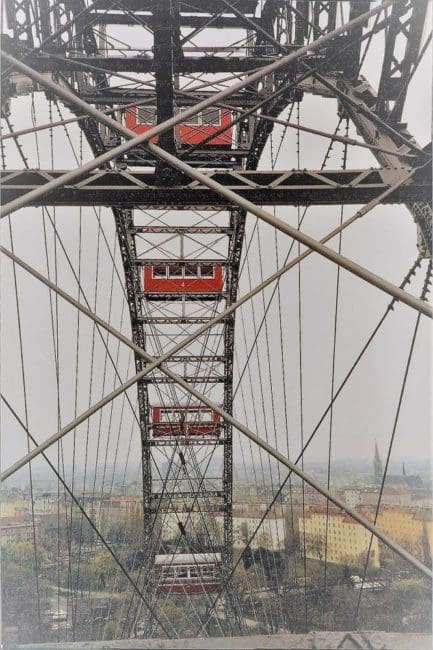 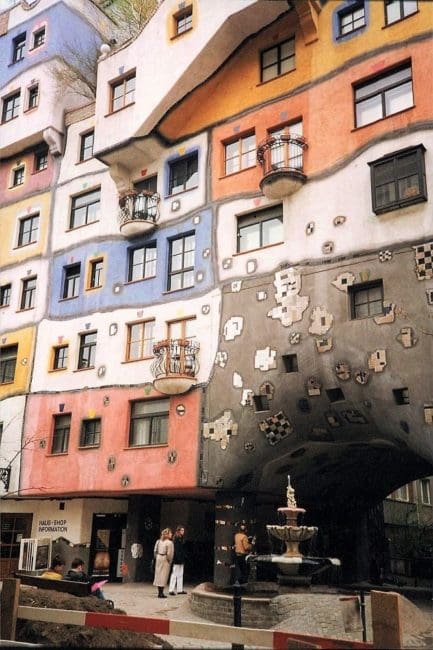 I catch trams around the Ringstrasse. as its name suggests, it circles the historic old city. And I spend most of the day marching through elegant gardens, past ornate palaces, sparkling fountains and churches with intricate spires and patterned tiled roofs. The best roof has to be the one on the unmissable St Stephen's Cathedral. Vienna is famous for its imperial palaces, especially the Schönbrunn, on the edge of the city, in Hietzing. It was the Habsburg's summer residence (the name means beautiful spring) and has 1441 rooms to marvel at. though they won't let you see all of them. Culture abounds. Mozart, Beethoven and Sigmund Freud have all made the city their home and influenced its development. In the MuseumsQuartier district, buildings ancient and modern feature Egon Schiele, Gustav Klimt and other notable Austrian artists. 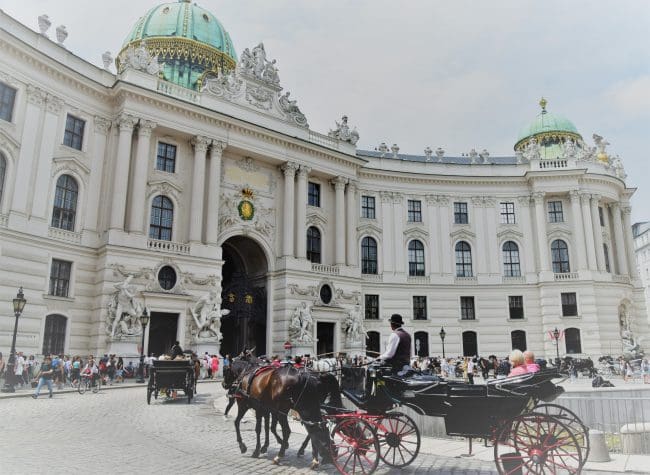 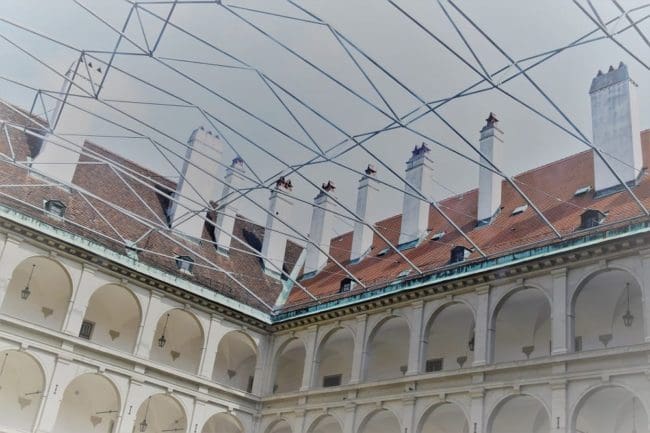 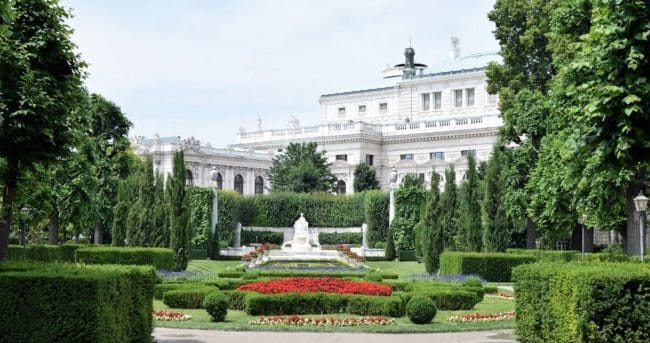 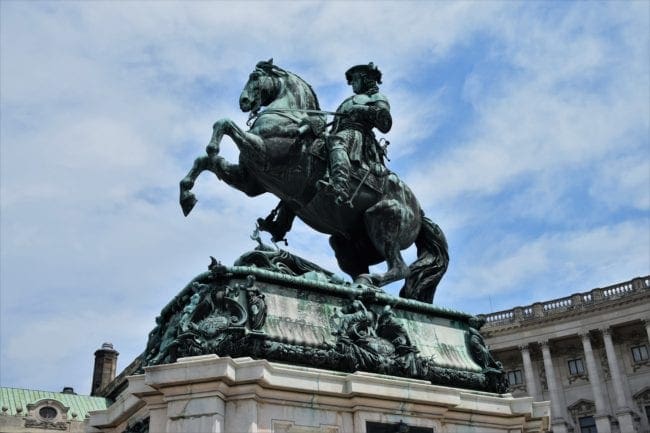 There's a statue of a man on horseback on nearly every square or corner. The city centre is mainly pedestrianised, the ways lined with elegant street konditorei, offering torte and strudel. Or Schnitzel restaurants. Vienna is thronging with tourists - many of them Japanese. So, I'm going into competition and trying out my selfie stick again. I'm not very successful - I've left my hands - and the stick - in the shots...

My revisit continues with the museum area and the Hofburg Palace (the Hapsburg winter residence and principal palace). the Spanish Riding School, round the back of the Hofburg. Here, in possibly the most famous horse training academy in the world, the famous white Lippizaner horses (they're born black, but the white grows over the black coat) perform classical dressage for tourists. Well, sometimes. Last time I was here, the horses were on their annual holiday. Every summer they are transported to paddocks elsewhere in Austria for a break. And this time, nothing is running because of Covid.

More ornamental greenery, (like the Volksgarten), linked gilded squares (look up to the pediments for the most interesting decorative features) and the parliament buildings. The other must see is the Hundertwasser House. I love his whacky glittery architecture. 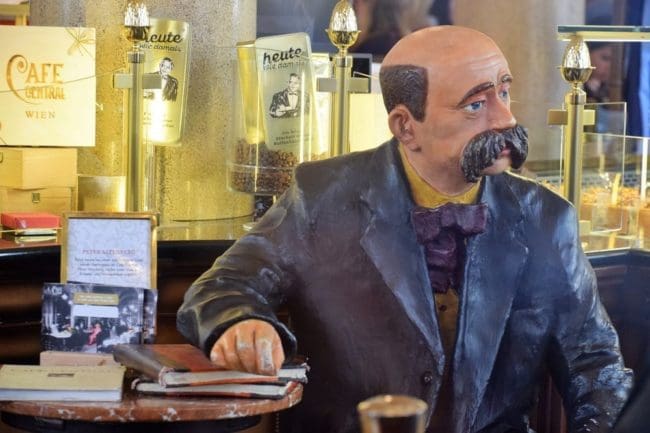 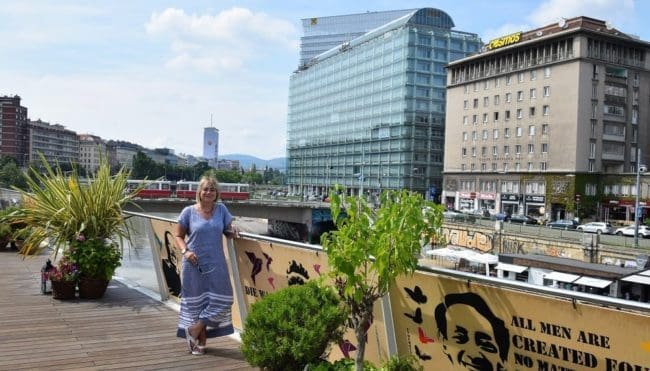 Exhausted, I search for the Cafe Central, planning a return torte extravaganza. But first I get lost, as my phone dies, taking my Google map along with it. I forgot how quickly its battery charge diminishes, when it’s been plugged to a European socket and I didn’t bring my power bank. So, I happily set off in totally the wrong direction, till I’m put right by a kind woman at a bus stop. Fortunately, nearly everyone speaks some English.

The Café Central is probably the most famous of Vienna's eateries. Slap bang in the middle of Vienna, it was the haunt of Trotsky, Freud, Loos (an architect) and several writers and poets (including Polgar, Zweig and Altenberg). Apparently, Peter Altenburg always used to walk out without paying, so he's commemorated with a statue. When I eventually track the Café Central down, there’s a queue snaking down the street. I’ve no inclination to stand in that, so I sneak past the line, to take a photo of Altenburg (he’s still waiting just inside the door), for old times’ sake, and settle for tea by the river.

Bratislava, the Capital of Slovakia 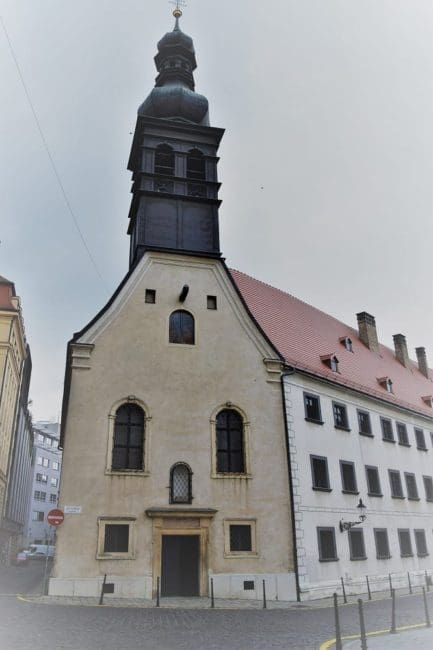 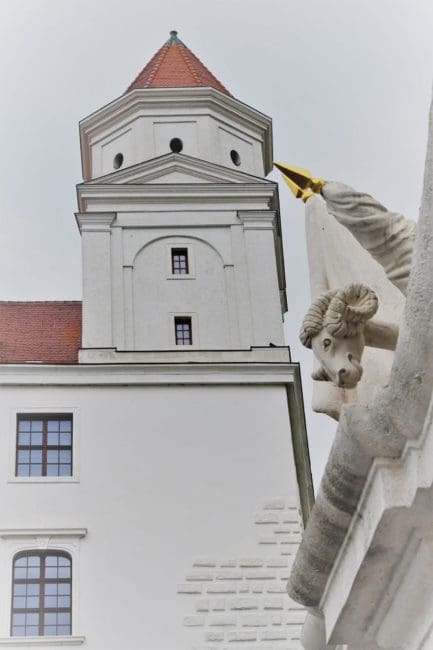 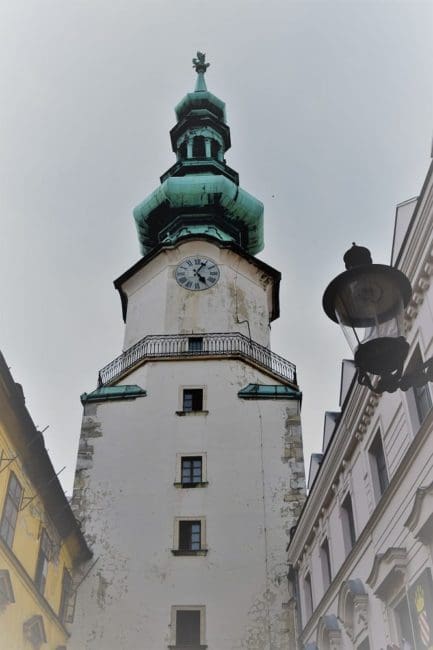 So, today it really is an exploration of Bratislava and yes, the lady on the desk was right. You can see the main sights very quickly. Even the tourist board promotes it as the 72 hour city (or see it in a day). I think the 72 hours includes trips out of the city. This capital of Slovakia nestles right in the south west corner of the country, backed by the Little Carpathian Mountains (sweet name). It is very close to both Austria and Hungary and so, is the only national capital that borders two other sovereign states.

Bratislava has a long and complex history. For many centuries it was part of the Hapsburg, and Austro-Hungarian empires, known as Pressburg (Slovak name Prešporok). For some time, due to Ottoman incursions into Hungary, it was designated the capital of the Hungarian empire. but even Pressburg almost succumbed to the Turks at one point. As its relevance to the Empire diminished, Vienna and Budapest grew in importance and national Slavic movements developed. In 1919, the name Bratislava was officially adopted. However, Bratislava, amidst fierce resistance, was incorporated into Czechoslovakia. It became the capital of the newly formed Slovak Republic, following the Velvet Divorce from the Czech Republic, in 1993. 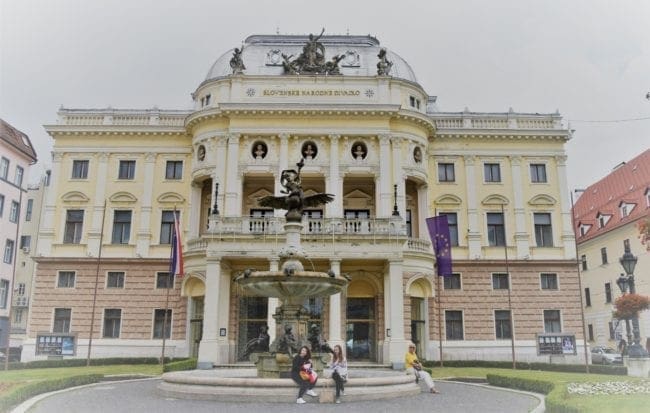 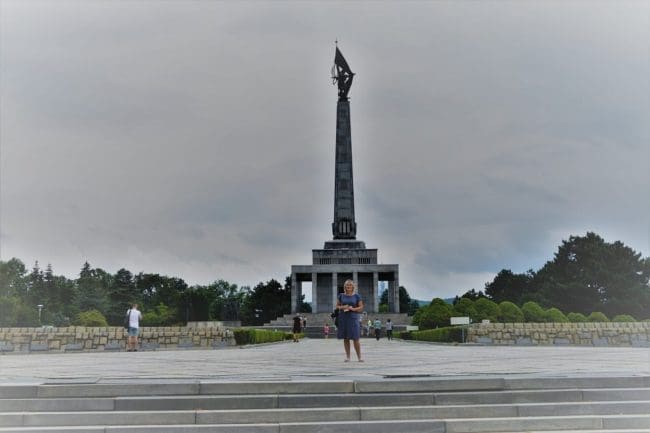 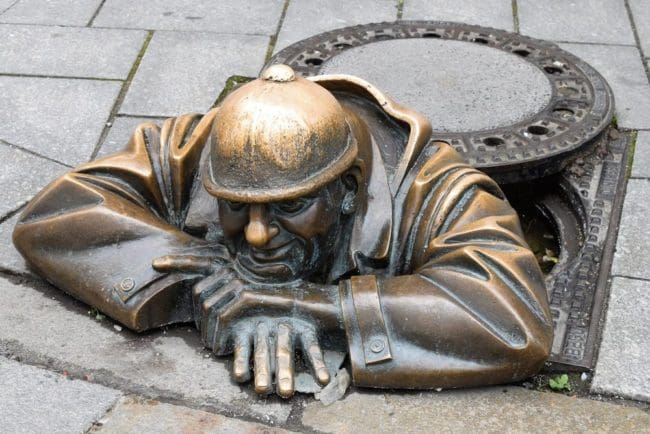 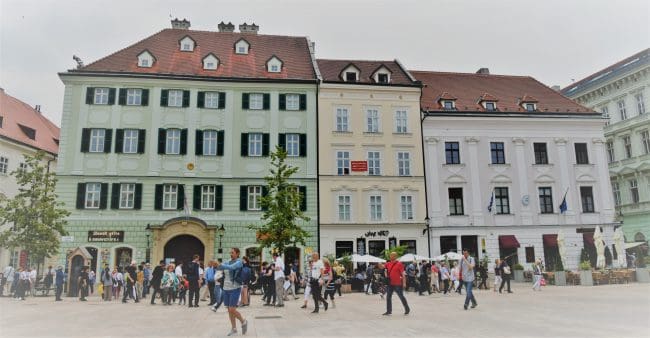 Bratislava is a more compact version of Vienna. It has a central historic centre that’s pedestrianised and lined with bustling cafes, and an outer ring served by trams. There are onion steepled churches galore, a string of bars (several stag parties looking worse for wear) plenty of fountains and bronze statues and a plethora of pastel coloured baroque houses and shops. There’s even a blue and white church that looks just like a huge iced cake.

Prices are modest and most of what is on offer seems modern and up to date - except for the public toilets. Some of the clothes and stationery on offer are a little shoddy. But then the offerings, at times, at home are too. Bratislava (the city rather then the country) is known for having a very high standard of living.

A Panorama City Tour of Bratislava 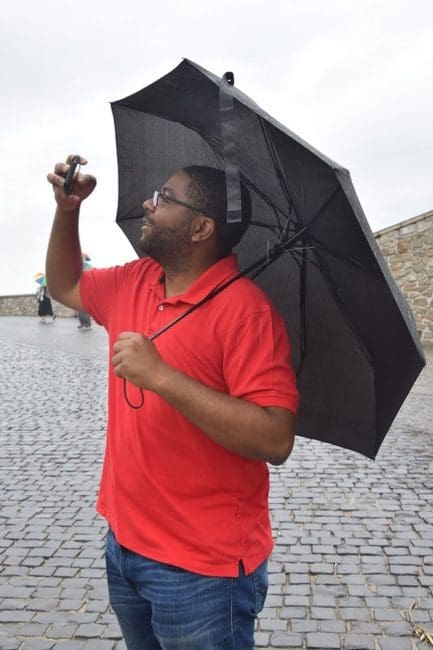 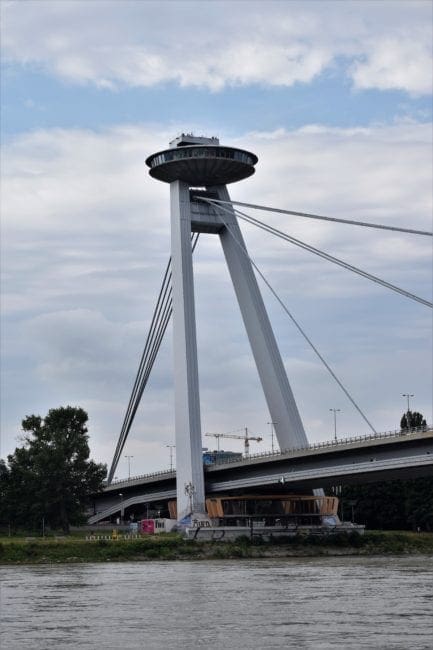 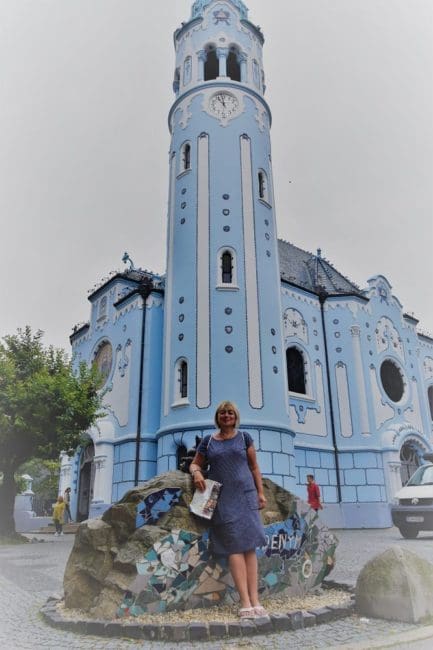 After I’ve walked as far as my legs will allow (I’m stiff from yesterday’s exertions), I take a ‘Panorama City tour’ on a scarlet mini bus. Here, I pal up with Terence, an affable student lawyer from Chicago, who's working in Prague. This works very well, as it takes me to the sights and viewpoints that are out of Bratislava centre. Most notably the World War II Soviet Slavin monument (great views over the city and castle). 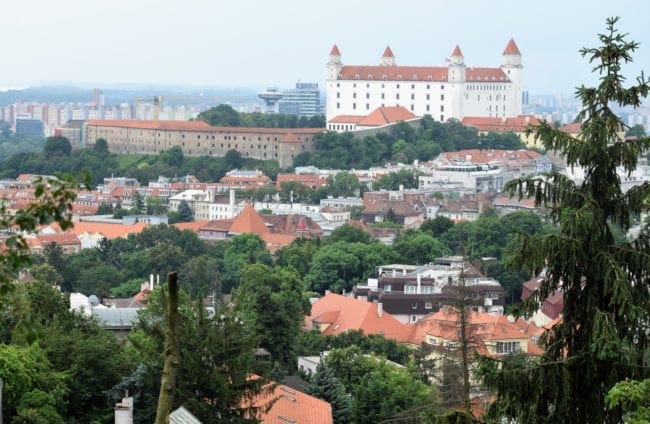 And then Bratislava Castle itself. Due to its strategic location, above the river, there has been a castle here for thousands of years. This stone fortress was begun in the tenth century, having been expanded over the years. Today, it houses the National Museum and is sometimes used for formal state occasions. It’s pouring with rain by now, so I run round the maze like gardens and back to the bus.

There's a tasting menu at the Houdini restaurant, next to my hotel, in the evening. Five courses with an Austro-Hungarian flavour and some liquid carbon dioxide wafting around. The raspberry and chocolate dessert is the best. 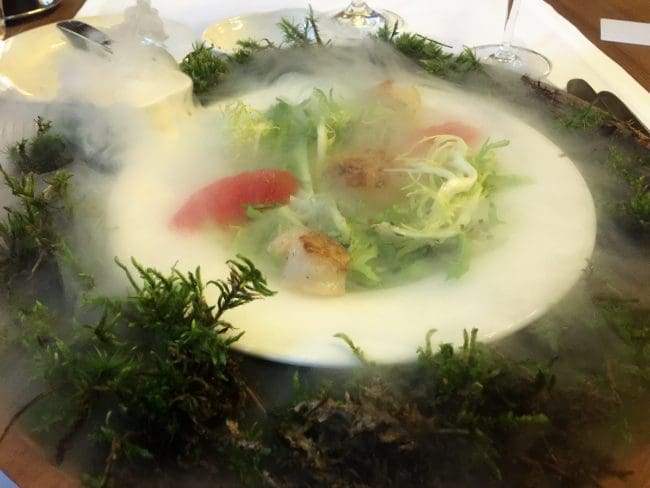