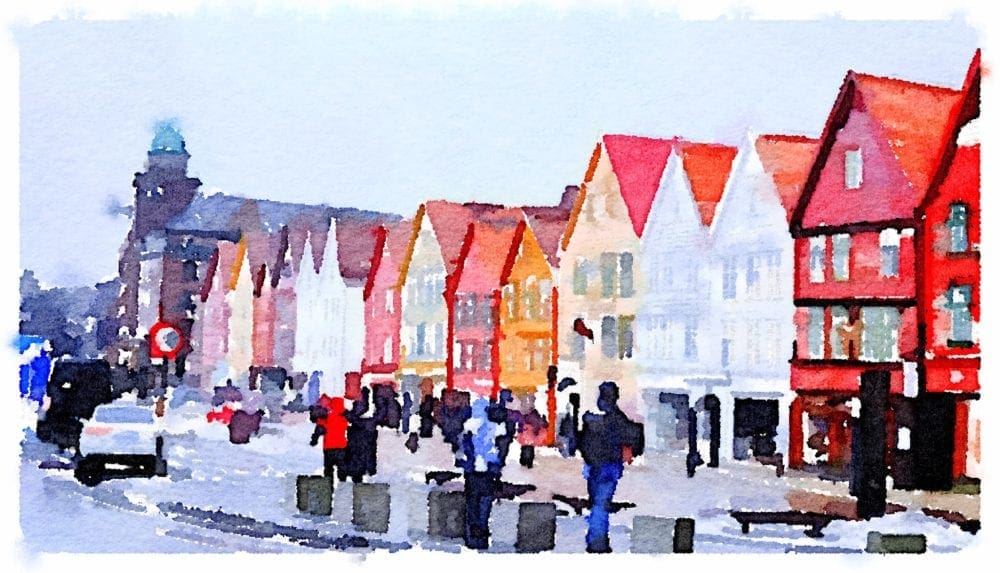 Norway - In Search of the Northern Lights

Hurtigruten Cruising up the Coast of Norway

A Hurtiguten ferry cruise up the spectacular coast of Norway, from Bergen to Kirkenes, on the border with Russia, via Ålesund, Trondheim, Bodø, Tromsø, Honningsvåg, the  Lofoten Islands and the North Cape. I'm hoping to see the Northern Lights. There's a guarantee of a free cruise next year if they don't materialise. But it won't be the same. as always, the fjords are lovely. Though many of the inlets are frozen at this time of year. The low light is atmospheric, and the snow tranquil, but you definitely can't see as much, in the gloom.

Bergen is the tourist hub of Norway, the heart of fjord land, right on Sognefjord, the country’s longest and deepest. It’s the second most populated city in Norway, but significantly quieter than Oslo. It has more of a tranquil small town vibe. Perhaps it’s the effect of the seven mountains that hug the city.

Bergen is still an important port. But it was once, at the time of the Hanseatic league (an early trading version of the EU), the centre of all Norway’s shipping (from the fourteenth century up to the 1830s). The most famous tourist haunt in Bergen is Bryggen, with its brightly colourful timber houses on the old wharf, the centre of the old trading empire. Today, museums, boutiques and cafes proliferate, instead.

If you get bored with town, shops and the lively fish market, there’s Edvard Grieg’s old home to visit. Or, making the most of nature, the Fløibanen Funicular, teetering up Fløyen Mountain for panoramic views and hiking trails.

Alesund is a  fairytale  town with charming art nouveau and its reflections in the water, at the entrance to the Geirangerfjord ( a UNESCO heritage site). It's built on seven islands. Most of the place was rebuilt after a fire in 1904. As with much of Norway, at that time, the destroyed houses were nearly all built of inflammable timber. So, it was decided to replace them with stone. It's fun spotting all the art nouveau curlicues, flowers and fruit, hidden away in arches and staircases. There's also plenty of modern, Scandi art to admire, inside the shops and museums.

Trondheim has a long history. It was founded in the tenth century and served as the capital of Norway during the Viking era. It's an icy and therefore slippery trudge round the streets. The most memorable landmark is the Gothic Nidaros Cathedral. It dates back to the eleventh century, and has an exceptionally ornate façade.

Bodo is a cruise port (fortunately its's quiet season), to be found on the Bodø Peninsula between the Vestfjorden and the Saltfjorden. It's not the prettiest of towns; there's a cathedral with a very modern bell tower and not a huge amount else. But it's framed by stunning mountains. Once past the town, we encounter polar night - a never to be forgotten ethereal blue silence. The chance of seeing the Northern Lights increases. And Neptune greets us, as we cross into the Arctic Circle.

The log cabin shaped Cathedral of the Arctic towers. above the houses at Tromsø. Here,the city centre contains more old wooden buildings than anywhere else in Northern Norway. This is located on the island of Tromsøya, but the urban area has spread onto the nearby mainland and part of the island Kvaløya. It's at 70°N (midnight sun and polar night), but the climate is relatively mild, as it's washed by the North Atlantic Drift, a branch of the Gulf Stream.

The Nordkapp (North Cape) is so cold and windy I thought I might not make it back. It's impossible to get a photo by the famous globe, atop the very steep cliff. It's supposed to mark the most northerly point on the European mainland. Well this is what they tell the tourists, but it's not true. The North Cape is to be found at 71°N , about 1,306.3 miles from the North Pole. And it's the most northerly point accessible by road.

The neighbouring Knivskjellodden Cape actually extends almost a mile further north. And both of these points are situated on an island, Magerøya, connected by road to the mainland. The northernmost point of mainland Europe is located 43 miles further east at Cape Nordkinn (about 3.5 miles further south) and about 70 km (43 mi) to the east. If you want to be totally accurate (or pedantic), the northernmost point of Europe, including islands ,is much further north, either in Russia's Franz Josef Land or Norway's Svalbard archipelago, depending on whether Franz Josef Land is considered to be in Europe or in Asia.

And yes, the Northern Lights put on their magic show twice - we were summoned from our beds by the ship's tannoy to see them in the early hours of the morning (you can turn the speaker off if you want.) It's difficult to do justice to them in words, and images don't really capture the essence; it's one of those events you have to experience. I've seen it called the Holy Grail of Sky-watching. To be honest, it's not even easy to take a photograph. Automatic settings on the camera don't work in the darkness. And you need a tripod for the required long exposures. Better just to watch. I think.

The Northern Lights, or the aurora borealis, are iridescent dancing waves of light caused by energized particles of light entering the earth's atmosphere. This super fast onslaught is slowed by the earth's magnetic field and directed to the poles, where they put on their performance, if you are lucky. The sun only emits these particles sometimes; you can look for Northern Light predictions online.

And finally, the small port of Kirkenes, where the ship turns round, is only nine miles from the Russian border. Most people are surprised to learn that Norway has a border with Russia It’s 120 miles long, further east than Finland (the same longitude as Cairo in fact) and the one road that passes through it is the most northerly border crossing in Europe. Much of the border is defined by a river and runs through dense forest. It’s marked by yellow posts on the Norwegian side and red-green striped posts on the Russian side. It doesn’t do to stray!

Unsurprisingly, Kirkenes has very Russian feel. There are bilingual street signs and the shops cater primarily for Russian visitors in search of quality goods. The Norwegians, when they can, nip over the border the other way, to buy cheaper fuel.

There’s a church, a museum and a World War II bunker to visit. .Or outdoor activities, like snow mobiling and dog sledding. And a snow hotel to stay in. But I’m already cold enough already. It’s literally freezing here - the sea water has coated the ship’s hull.

Life on the Ferry in Norway

Hurtigruten have been running their coastal express services since 1893. They were set up, by government contract, to improve communications in a land where travel by road isn’t always easy. There are hundreds of fjords and it takes a long time to drive round them, even if the road is clear of snow.

The boat was comfortable (there's even an on deck jacuzzi) and the food good and plentiful. It’s locally sourced and the seafood buffets are divine.

We were rewarded with a fascinating cinematic view of the everyday commerce, the deliveries, the comings and goings of the people of Norway moving from one port to the next.