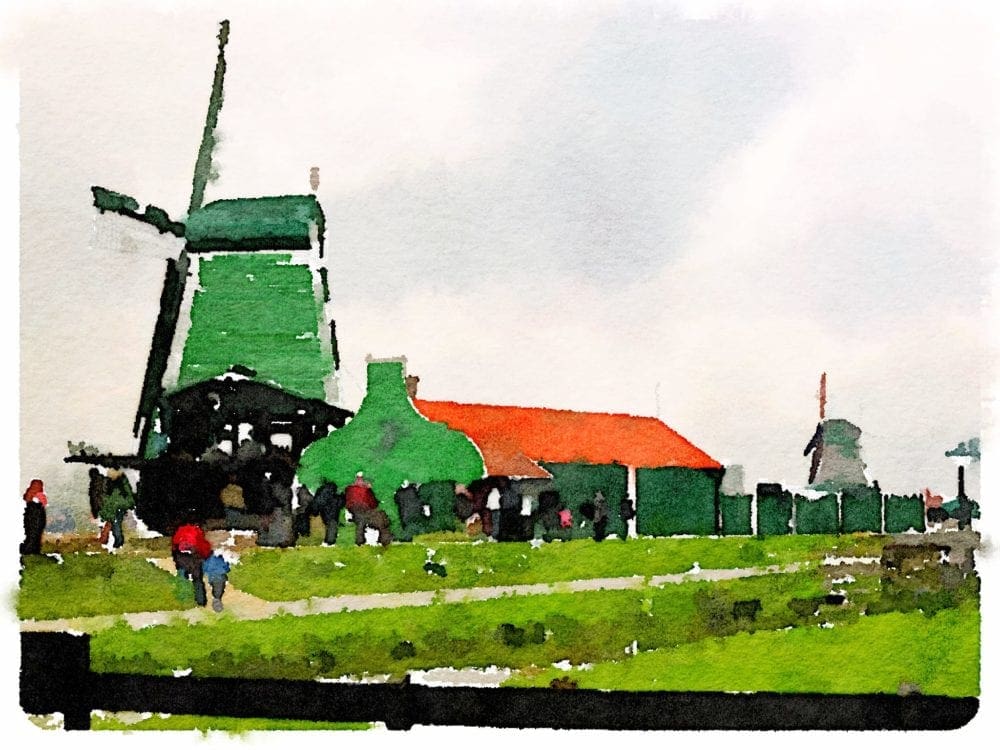 Tulips in Holland has been on the bucket list for a long time so we load up the car and set off for Delft. Holland is so small that on the map everywhere seems reasonably close. Though there’s more traffic than we expected. It’s densely populated, there are festivals on (I think it’s the queen’s birthday). And there are the tulips. As usual Tina takes the wheel of my trusty mini and I navigate. The weather is a little perverse. So the two most farmers sets of windmills are admired through a brooding misty haze, while the tulips at Keukenhof Park and around bask in glorious sunshine. It’s the right way round for the photographs.

The nineteen splendid windmills of Kinderdijk have been declared UNESCO World Heritage and those at The Zaanse Schans are restored and set in a kind of living museum with authentic Dutch houses and shops (of course).

In between we reconnoitre Haarlem and wonder at the gabled houses with their distinctive curves, the plethora of tulips for sale in the markets, the stacks of spherical cheeses and the cakes in the dinky little tea shops. Haarlems' nickname is Bloemenstad, because it is in the centre of the bulb fields.

The tulips live up to expectation, and the park is lovely, if crowded, but these are gardens. though there aren’t as many fields in flower as I had hoped. Maybe we just don’t’ know where to look?

The old university town (and former capital) of Delft is possibly even more interesting as it has blue and white pottery and tiles (naturally) and canals and the attendant little white bridges too. Though my umbrella lands in the bottom of one canal after an unexpected gale. There’s a music festival on and the market square is a hive of activity, mostly related to beer and the wearing of orange T shirts. Beer features a lot in Holland. The supermarkets are piled high with it and I notice there’s very little wine or spirit on offer. The lottery of choosing a hotel has worked to our advantage on this occasion. Our hotel is great- it’s a converted warehouse oozing character beams, brickwork and good breakfast.

And after that the deluge begins. It’s bad enough to contemplate building an ark. We rule out Rotterdam, the biggest port in Europe, which has mixed reviews (unless you’re into nightclubs), and wade round The Hague, with its solid civic buildings (it’s the seat of Parliament but not the national capital, which is Amsterdam)) and the Mauritshuis, home of the Vermeer museum. There’s a long queue (in the rain) for this one - Dutch Master painter Johannes Vermeer (of Girl with a Pearl Earring fame) is actually buried in the medieval Oude Kerk (old church) at Delft. Possibly more exciting is the Escher gallery with works on display in a former palace of the Royal Family. It’s an eclectic mix of mind boggling graphics and 3-D oddities and worth it, even though we’re sodden.