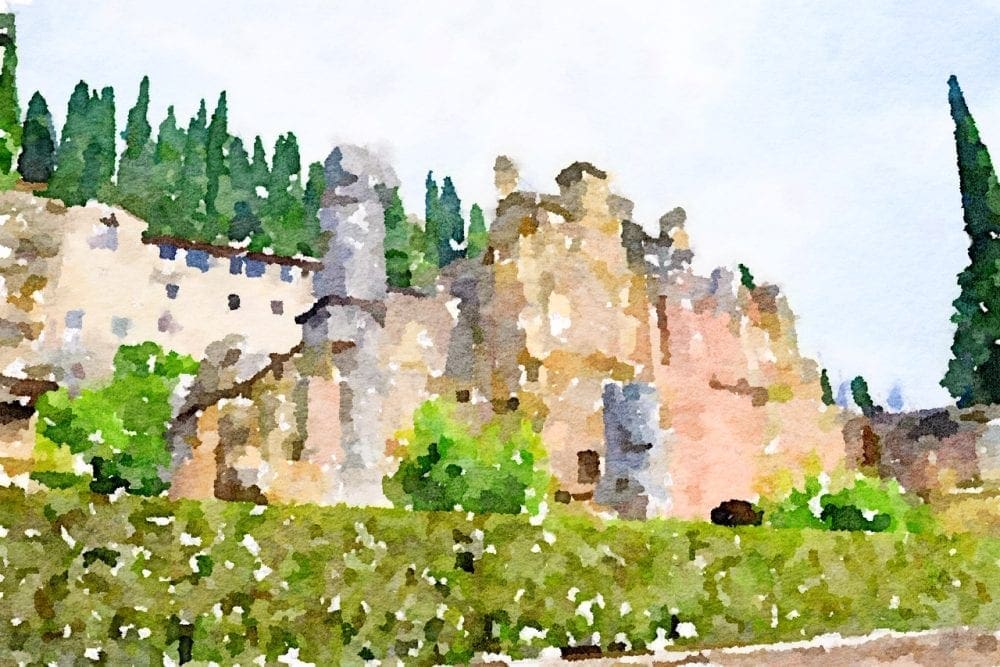 I’ve got a two month Interrail Pass. I’ve had to amend my original planned route five times already to take account of regulations post Covid. I’m not currently allowed to go to Slovenia and on to Budapest and Sofia from Venice, so I’m going to Verona instead.

It’s a slow regional express which is almost empty when I embark. I have a carriage to myself, so I slip off my mask as the train pulls away, only to be admonished immediately by the guard/driver as he wanders through. I notice he’s taken his own mask off to speak on his phone.

The journey is unremarkable for the most part. There are a plethora of train tracks, sidings and industrial areas. And towards the end a few rolling hills

My Hotel in Verona

Finding the Sole Hotel is like being in a Crystal Maze challenge. It’s down the side of Platform One, which involves taking two lifts up and down between platforms and then navigating a grimy labyrinth. The rooms belie the exterior and are modern, basic but nicely fitted out. The towels are plump and fluffy – in fact, it all looks brand new. Though it’s a shame that I can’t get the air conditioning to switch on.  I was going to write that any drawbacks are outweighed by the fact that  it’s super convenient, when you know where it is. But it's rather too close to the tracks for any long and peaceful slumber. And the sound insulation between the rooms isn’t that great either.

Verona has a very long history, way back over two millennia. It developed and was important because it's sited at the intersection of several roads. Verona became a Roman colonia and then a municipium - its citizens were deemed to be Roman. But the city was at its most prosperous between the 13th and 14th centuries, when it was ruled by the Della Scala Family. Their legacy remains throughout the city, but most obviously, they built the imposing city walls. 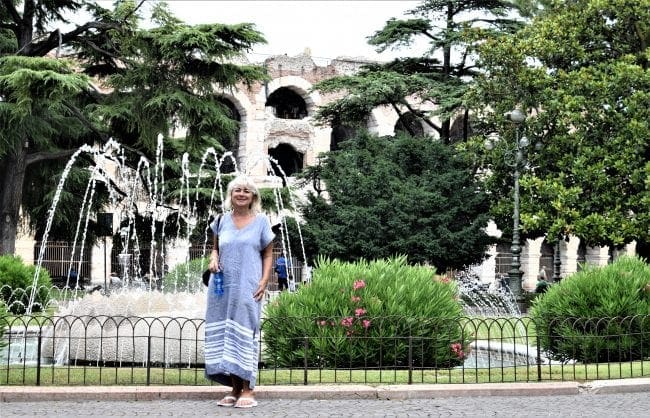 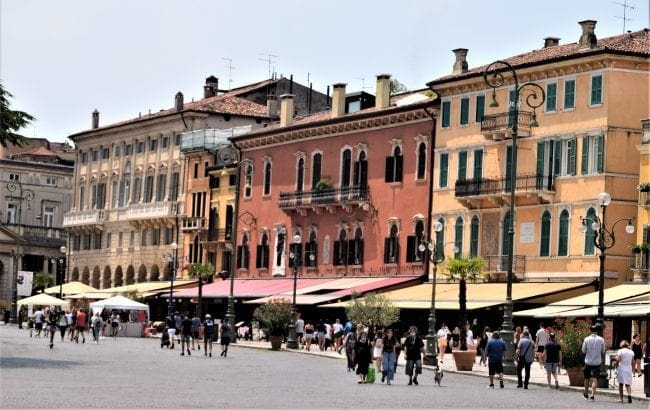 The Centro Storico (Old City) is also known as the Citta Antica. It's a ten minute walk away from Hotel Sole. Much is closed in the avenues I stroll along to get there, shops bare and deserted, bars shuttered, as are most of the stores in the station. The centre itself is fairly busy, especially the main pedestrianised shopping street, the Via Mazzini. The Italians almost to a person remain elegantly attired, with exquisitely styled hair. They even manage to make shorts look sophisticated, with high nipped in waists, billowing blouses and  glittery designer belts.

Possibly the most impressive spectacle is the first century well preserved Roman arena. It is used for Verona's famous opera performances, when Covid allows. It’s seating capacity is 15,000 (down from 30,000 in Roman times). It is going to be used for the closing ceremony for the 2026 Winter Olympics in Milan and Cortina d'Ampezzo. I buy a huge cone of potato chips doused in mayonnaise and sit by the fountain in the Piazza Bra, where the arena is situated, to admire the view. They are advertised as Amsterdam chips and cooked by an Afghani. They are delicious. 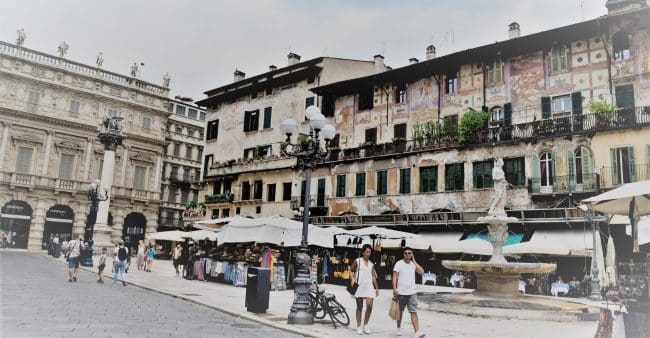 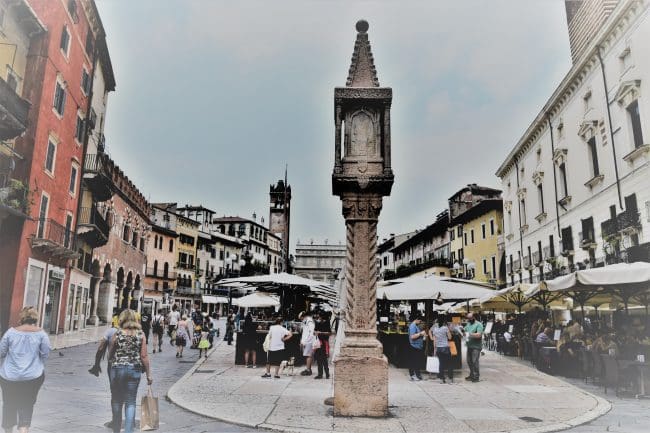 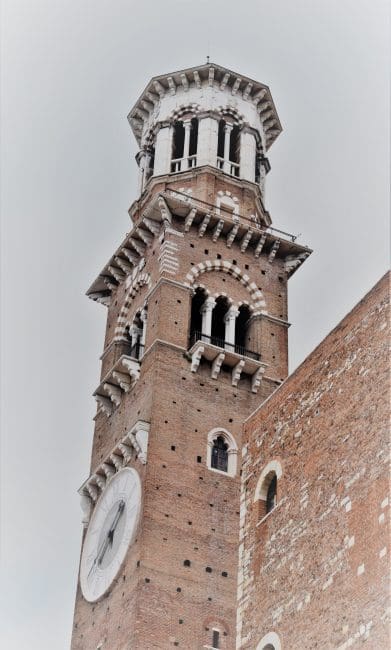 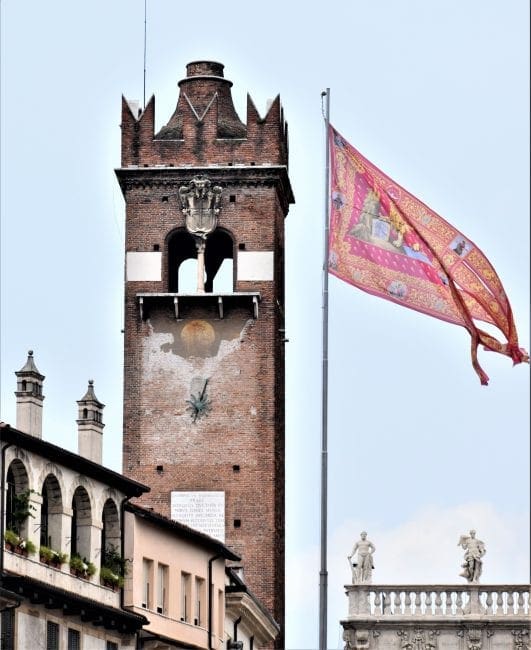 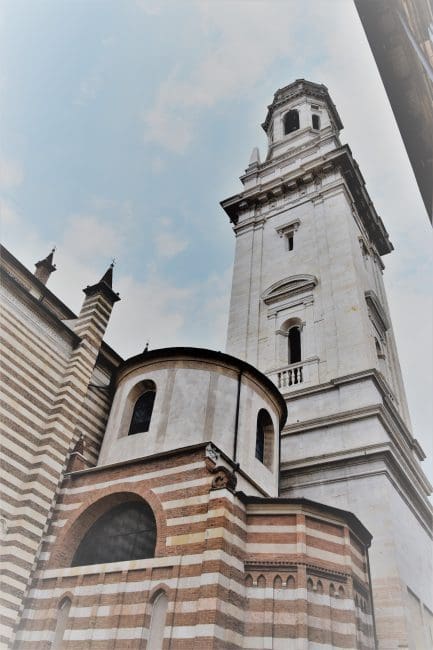 The other main sight is the Piazza delle Erbe (Market Square), stuffed full of cafes and feats of architecture. This was the forum in Ancient Roman times. One side occupies the site of the ancient Roman Capitol Hill. To the north, the ancient town hall, the brown brick Torre dei Lamberti, the Casa dei Giudici (Judges' Hall) and and some fascinating but crumbling frescoes - on the balconied Casa Mazzanti. The western side, the shortest one, features the Baroque Palazzo Maffei, adorned by statues of Greek gods and anotehr clock tower, the square shaped Gardello. No excuse for being late here. There's also a white marble column, topped by St. Mark's Lion, the symbol of the Republic of Venice (this is still Veneto).

The oldest moment, amongst this array, is the della Scala fountain. It cheats and incorporates a statue called Madonna Verona, a Roman sculpture dating to 380 AD. It's smothered in market stalls today. I could go on. There's the capitello, more churches and several columns. And of course, ranks of pavement cafes.

Beyond here, surprisingly secluded, is the cathedral, dating right back to 1187 and dedicated to Santa Maria Matricolare.

Verona, The City of Shakespeare 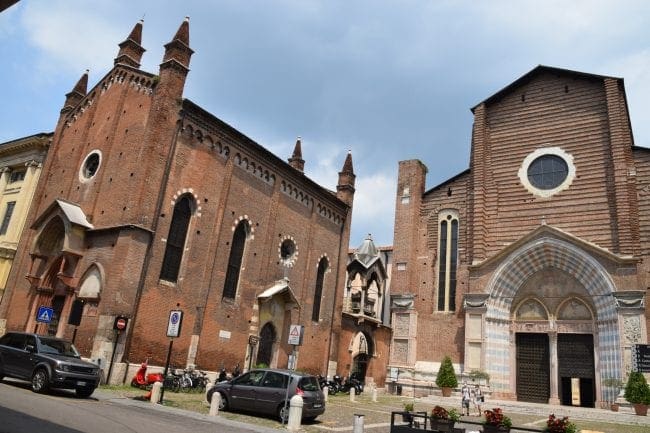 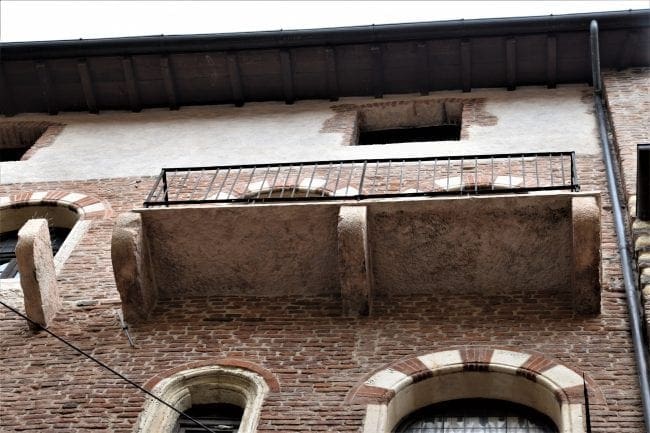 Naturally, Verona is capitalising on its Shakespearean connections, though it’s a matter of some debate as to whether Shakespeare even came to Italy. He almost certainly based the story of Romeo and Juliet  - ‘in fair Verona, where we lay our scene’ - on two families mentioned (or invented) by the poet Dante. Nevertheless, there’s a Juliet House with a balcony (that was added in 1936), a tomb (at the place where Juliet died in the play) and even a Romeo mansion. Suffice it to say that I’m not queuing up for any of those.

I notice that Two Gentlemen of Verona isn’t getting a mention anywhere. According to The Guardian, "it is far from being his most polished work" (if I were Julia I certainly wouldn’t have had Proteus back). It has the smallest cast of them all, but it actually does begin in Verona, before moving the setting to Milan and Mantua. 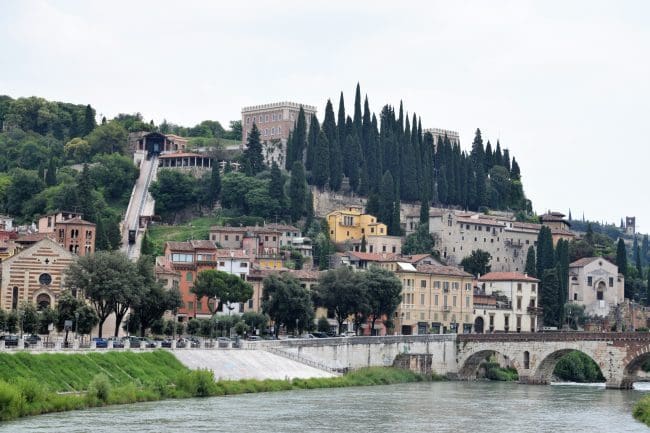 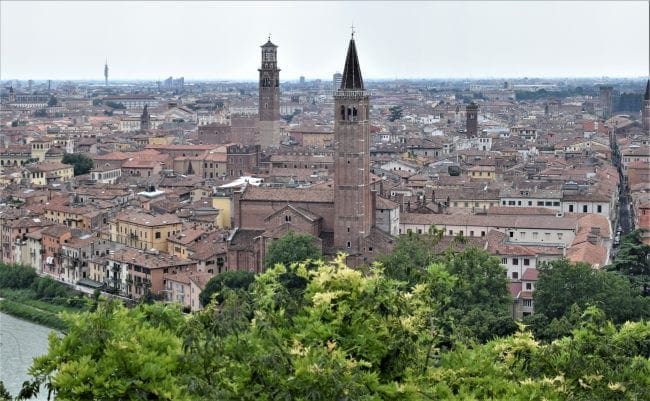 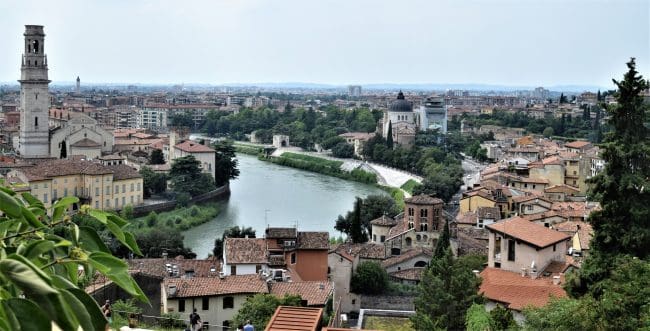 I don't think it's got anything to do with the city, but My Verona is the current earworm. Wasn't it adapted from My Sharona? As I sing, I am riding the funicular, up the steep hill to the Piazzale Castel San Pietro. This is a medieval fortress set high on a hilltop above the city. The castle and restaurant are closed, but the views from the surrounding terrace are worth the effort. Anyway, there wasn't anyone waiting and it was only a euro to avoid a calf burning climb.

From the tranquil plateau there’s a complete panorama, through the cypress trees, over the tiled rooftops and spires of Verona, the glistening River Adige looping round the edge. Francesco da Mosta describes Verona as ‘a wonderful city surrounded by hills. arranged like banks of theatre seats’. I can see why, looking at the tiered slopes.

The ancients obviously thought so too. This hilltop is the obvious place to choose to defend the city and there's been a fort here since Roman times. Then, the hill was known as Monte Gallo, or Rooster Mountain. The Romans also revered this location as a religious site and built a temple and theatre here. The remains nestle at the bottom of the slope. A little further south the Giusti Gardens - a formal tiered space - your model Italianate garden..

Verona, The City of Love 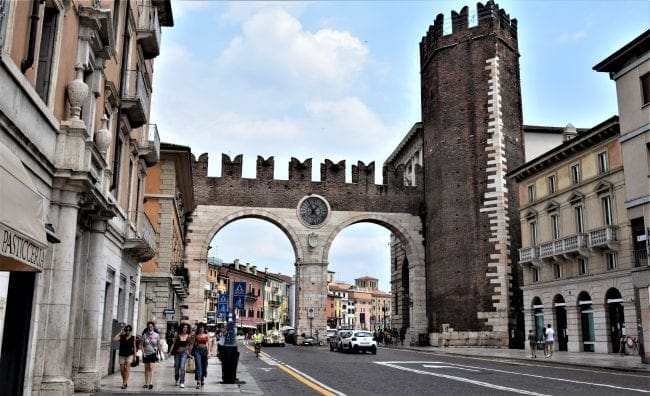 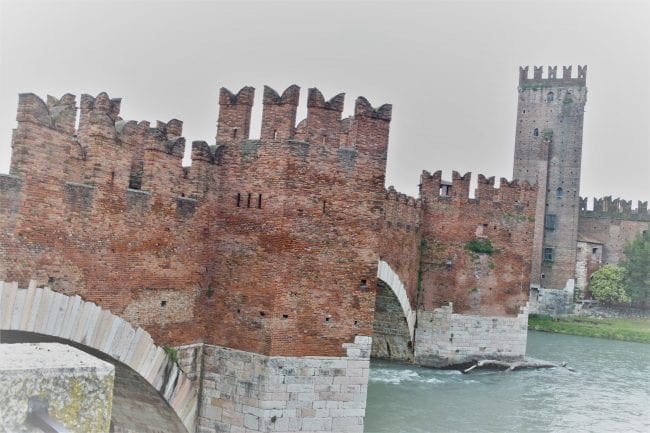 Verona is named The City of Love after Romeo and Juliet - but personally I think Venice is far more romantic. I’ve also read that there is an Italian saying - ‘Venetians are great lords, Paduans are great doctors, people from Vicenza eat cats and people from Verona are all crazy. Maybe COVID-19 has calmed things down.

I follow the bend of the Adige round the city admiring the Della Scala city walls and bridges. Thy have even more pronounced  red brick swallowtail crenellations than the ones in Bologna. They abound at the Castelvecchio (literally old castle) and its crossing.

But, the sky is getting dark and I race back to my little room, just beating the rain, which pelts down. But that’s not thunder that’s reverberating around the building - it’s the trains roaring past.