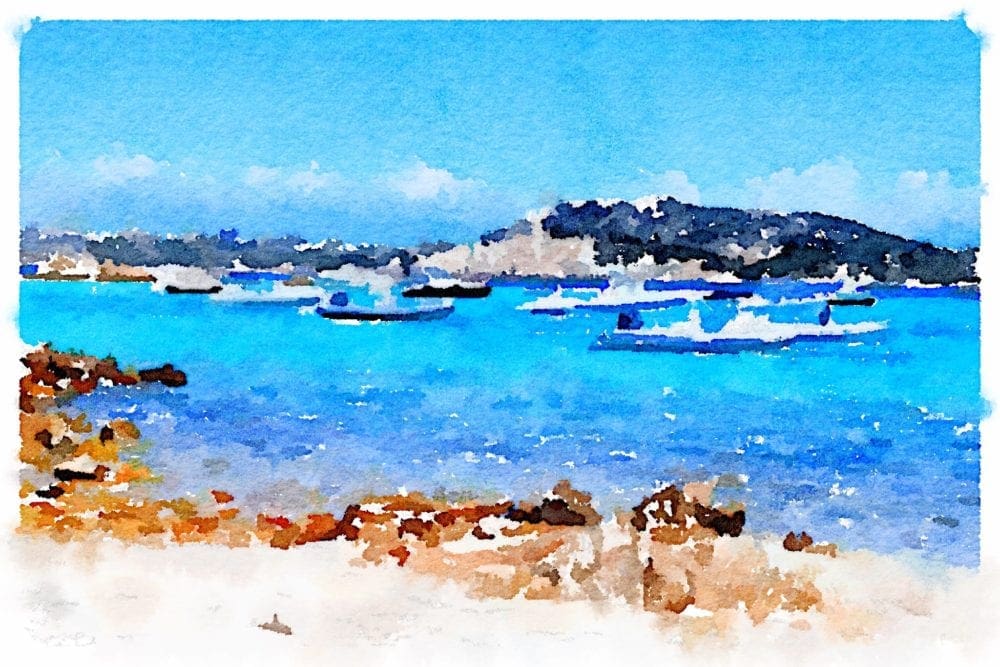 Italy - Sardinia - The Most Expensive Real Estate in Europe

Sardinia is big. In fact, it is the second-largest island in the Mediterranean Sea, after Sicily. It nestles west of the Italian peninsula along with Corsica, which is a French island and closer to Italy than Sardinia is. Sardinia is also one of the 20 regions of Italy and one of the five Italian regions with some degree of domestic autonomy. Partly because Sardinia's large and partly because we're after a beach holiday Susanna and I are headed for the north coast and the Costa Smeralda.

The guide books say that before the development began this area of Sardinia was only frequented by shepherds and their flocks. The area was first developed by the Aga Khan in the sixties and he wanted to keep it all up-market. This is the most expensive real estate in Europe. 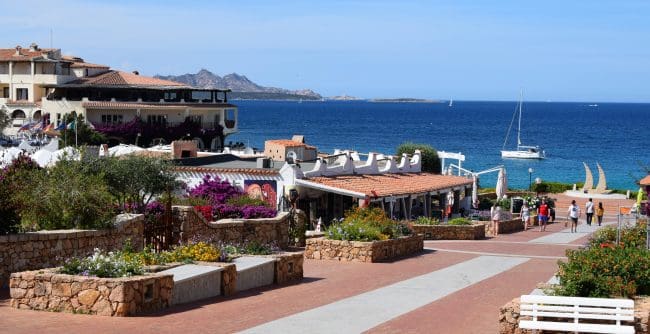 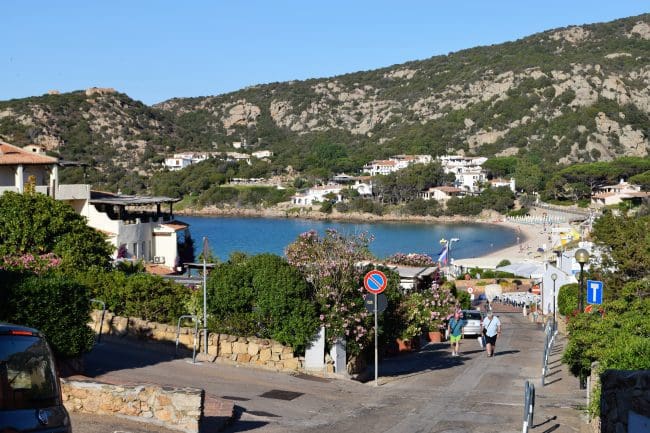 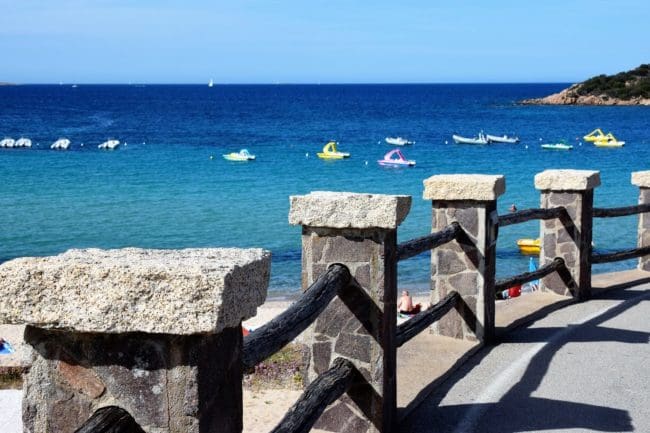 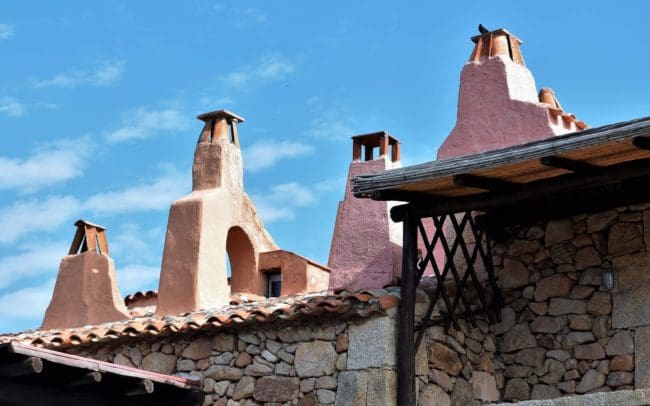 Unusually, the Costa Smeralda is exactly as I hoped and expected. The buildings are all relatively modern, but they have all been designed to meld in with the wild mountain scenery and the pine and tufty chamomile. The roofs are charmingly red rustic with curved tiles and the chimney pots all have quaint triangular stone caps; some even have arches, echoing Gaudi. Sprays of bougainvillea and oleander in full exotic bloom scramble up the walls and along all the roads and the air is scented with jasmine. The roads are wide and modern, except where they teeter over the mountains to quaint villages. It’s difficult to fault it.

Our bay, Porto Sole, on the edge of Baja Sardinia. It is very pretty with views across extraordinary curly rock formations (limestone with 'granite intrusions'). The beach is ‘white sand’ with plenty of sunbeds, though not too many people, and the water is exceptionally clear. It’s cobalt blue rather than emerald though, so I’m not entirely sure why this is called the Emerald Coast. 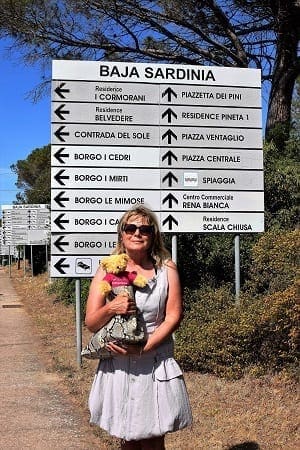 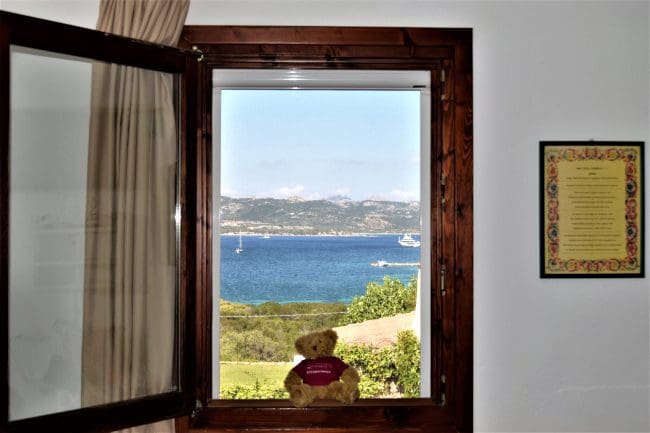 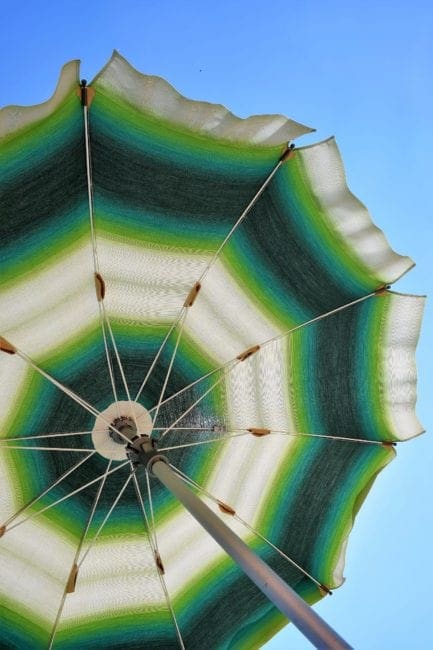 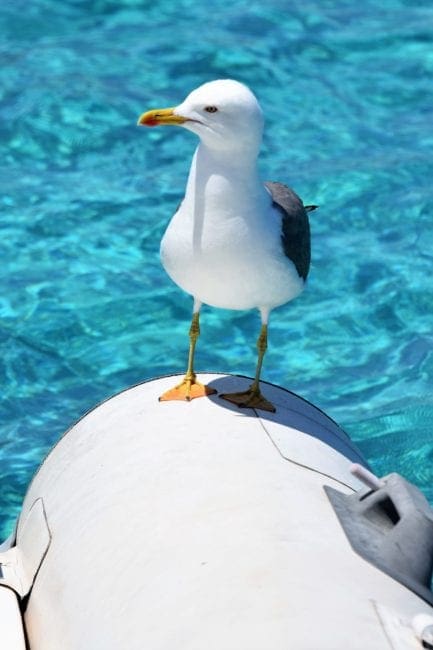 Our hotel, the Villa Gemella, is definitely the poor relation. Everything else in the vicinity is opulent and stylish. But we have everything we need. It’s immaculately turned out. There’s a pleasant pool and we are perched above the bay. We can see it from our tiny bedroom window - if we stand up. I’m not sure it really qualifies as the pay extra for a sea view that was requisitioned. But perhaps I’m being pedantic. The owner reminds me of Rising Damp Rigsby, but he is definitely more affable.

The youngsters on the beach at Porto sole are stick thin and firm skinned and wear thong bikinis to fully exhibit their attributes. But then so does everyone who isn't adolescent. I've never seen so much cellulite and folds of fat on public display in my life. It’s obviously good that folk don't care about complying with what the media tells us it's okay to put on show. But what happened to the health benefits of the much lauded healthy Mediterranean diet? 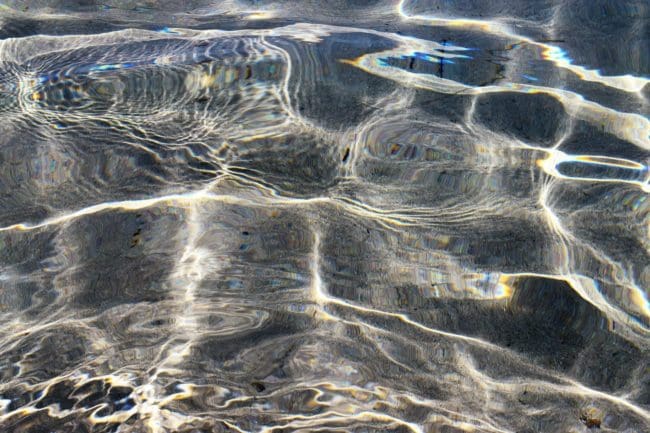 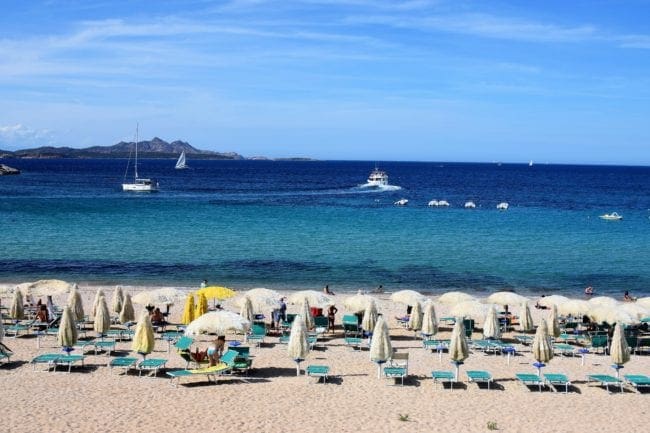 The beach is much too comfortable to abandon, so a sun bed is home for the day. In the evening there are a proliferation of restaurants, most of which offer the same menu of fresh seafood, pasta and pizza. On the first night we walk into town proper for a cliff top seafood supper with the gin and tonic brigade. We get lost trying to return on a different scenic route, proffered by Google, via hills and beaches. At least we work off a few more calories, wandering around for an hour, searching for a road that doesn’t exist.

After that, organisation is taken over by Rigsby, who books us dinner in exceptionally good establishments: fresh grilled fish, fairy lights, good looking charming waiters, and ferries us back and forth to boot. He has also organised a boat trip round the islands. He is acting as taxi for that too. Trip Advisor says he has an English wife, but she is not in evidence and hasn’t been mentioned and we don’t like to ask. He is very keen on his tabby cat. 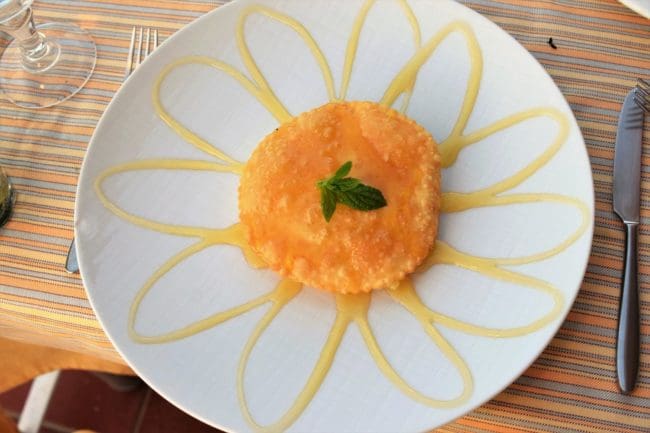 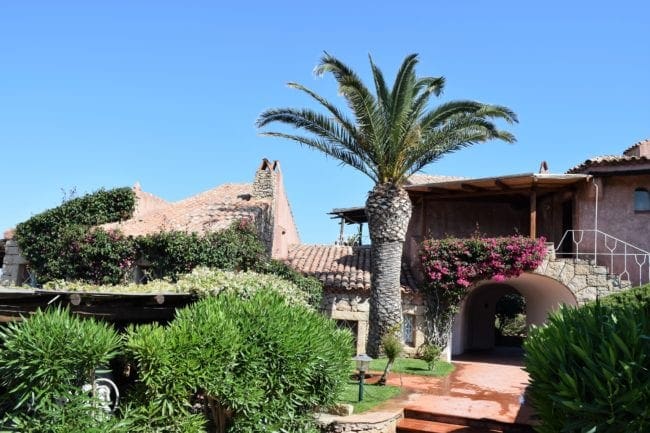 After two days on the sunbeds of Sardinia we are up for the rigours of a boat trip out to the Maddalena National Park. This is a cluster of islands off the coast to the north. Seven large islands and 55 tiny isolotti. This stunning, almost Caribbean landscape, is the home of the really rich and famous. They were hoping it would stay secluded. As we motor through the archipelago, the mountains of Corsica form a grey backdrop on the horizon.

Spargi, Budelli, Santa Maria and La Maddalena. La Maddalena is a busting port scenically crammed with ornate shutters, pastel stucco, locals smoking and drinking coffee and fishing boats. Surprisingly large, there are even cinemas. It was a favourite of Garibaldi and there are various memorabilia to prove this.

Singing the Blues in Sardinia

Ever more incredible rocky outcrops guide our way. Further out, the water is so swirly turquoise and ultramarine it would give the Blue Lagoon a run for its money. The tiny bays are utterly gorgeous. And, from a distance, the beaches described as white sand actually do look white, though close up they're really light beige. Several are roped off, due to entrepreneurs removing nature’s bounty. Budelli 's Spiaggia Rosa was famously pink, until the tourists overran it.

Spargi is uninhabited, framed by sea grass, as well as amazing granite intrusions. At Santa Maria we drop anchor in yet another stunning bay. But, (there's always a ‘but’ isn't there?) there are about 80 other boats moored in the same spot. Most of them are tenders from the super yachts that dot the larger bays and harbours. So it's a little too cosy on the strip of beach for comfort. And like our own adopted beach the water, though still crystal clear, even in the depths, is a little too bracing to be totally enjoyable. 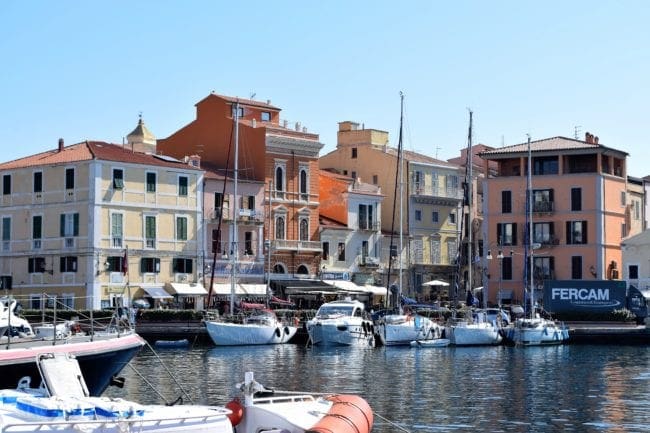 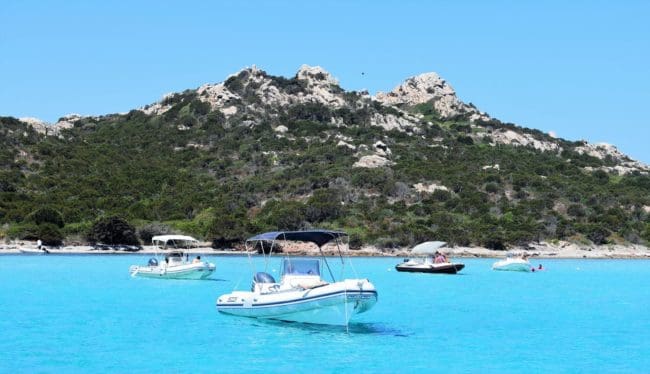 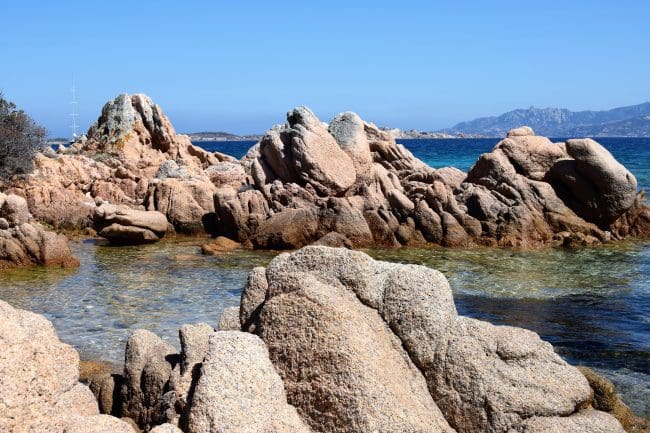 Porto Cervo - Blinging in the Rain

Porto Cervo is the centre of this billionaire’s playground, the ritzy anchorage for the mega sized yachts, so it has to be a port of call. What’s more it’s pouring with rain after a beautiful four days (we fly home tonight) and it isn’t much fun on the beach. Rigsby offers to chauffeur us there. 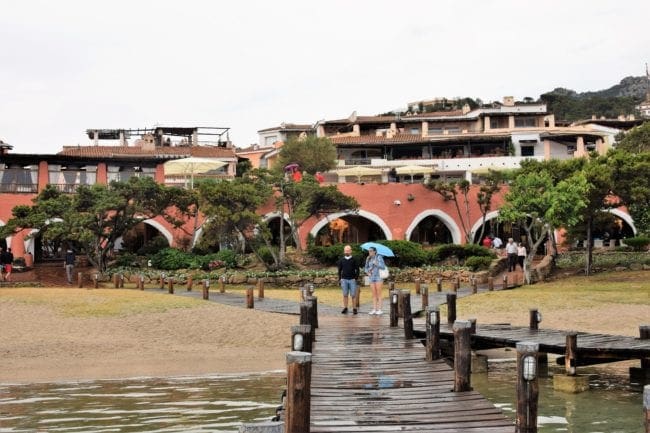 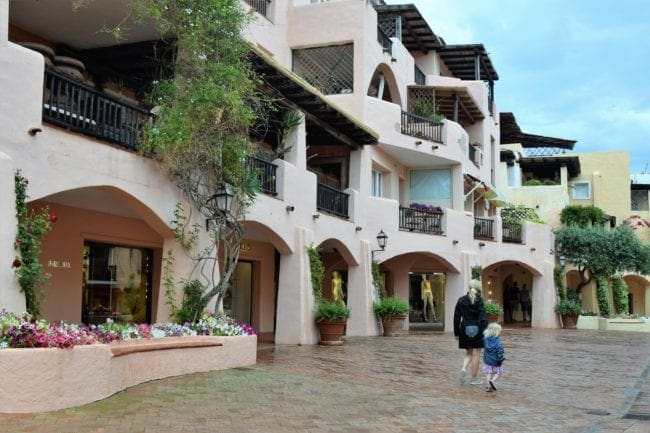 The architecture is similar to the rest of the coast, although tending to white and brown. Otherwise, it’s Bond Street by the Sea. There's every high end Italian brand (and a few others for good measure) featured behind the stucco frontages. The bling is extraordinary- everything is sparkly and ornate - and I wouldn't be tempted even if i could afford anything. Needless to say nothing in the windows is priced. The shops are all empty however. None of the Italians wandering the piazzas seem any more inclined to spend than we are. Everyone clusters in the one seafront café that has affordable coffee, waiting for the deluge to finish. At least, it’s easier to leave Sardinia and face the Easyjet journey home when things are less idyllic.